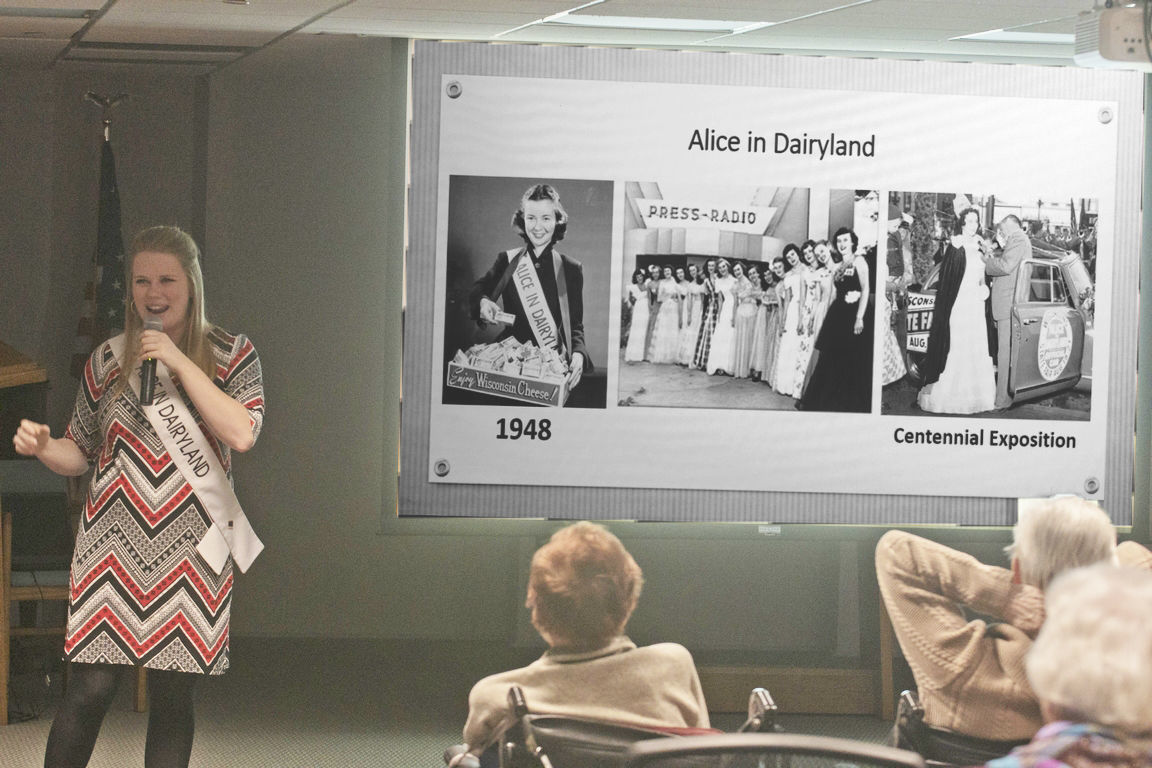 Abigail Martin, Wisconsin’s 72nd Alice in Dairyland, recently charmed and informed residents of Fairhaven Senior Services during a visit arranged by Brian Robinson, director of Leisure Services. Martin shared that her “passion for Wisconsin agriculture” began while growing up in Milton on a family dairy farm for 150 to 200 Holstein cows. Shown above and below are some scenes from Martin’s visit. 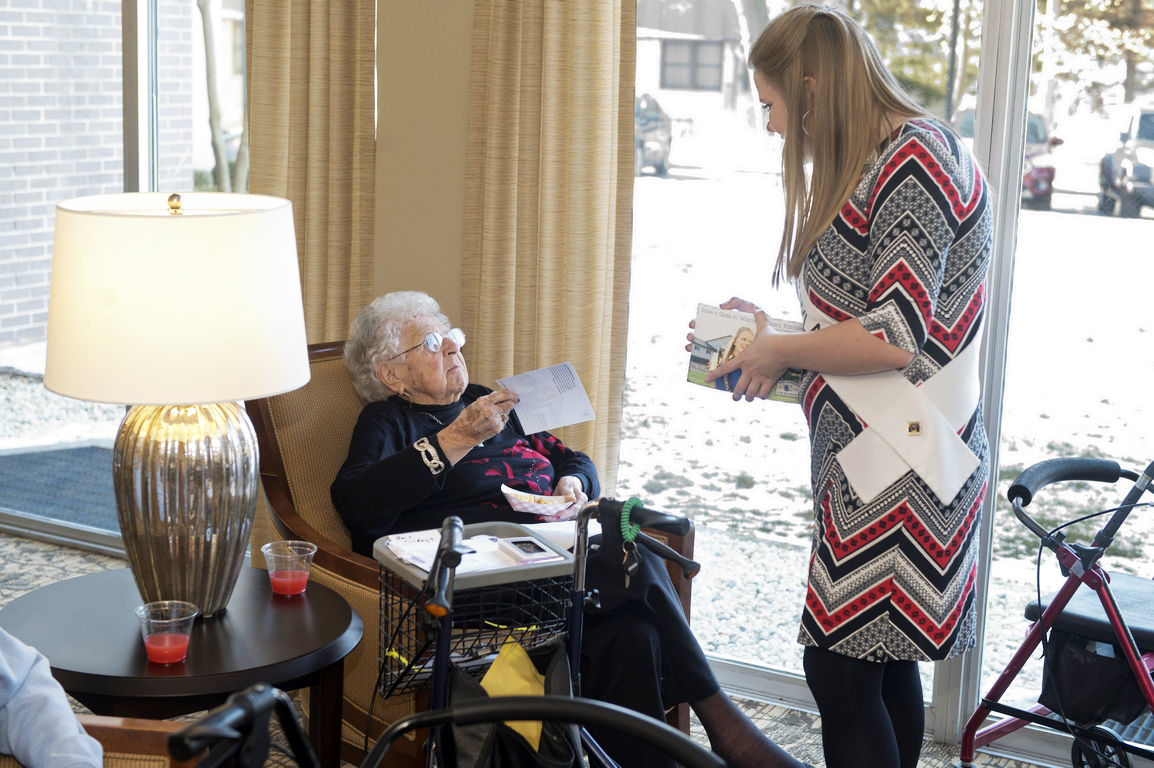 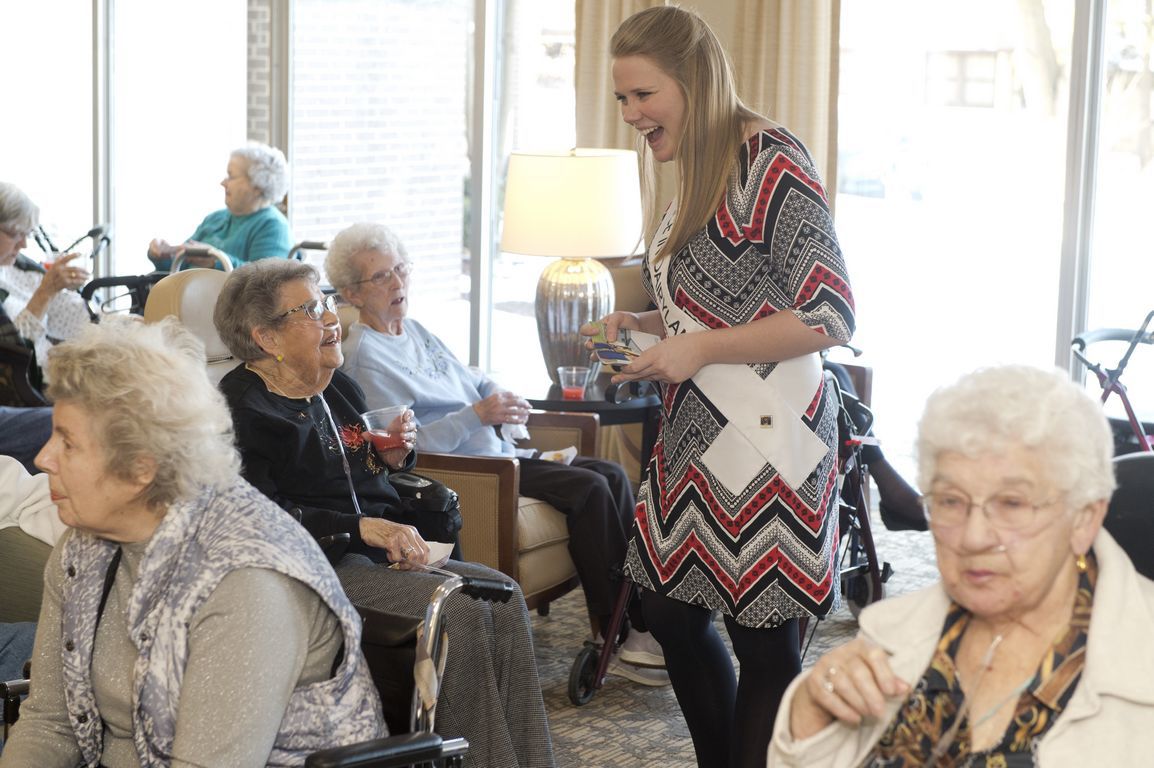 Abigail Martin, Wisconsin’s 72nd Alice in Dairyland, recently charmed and informed residents of Fairhaven Senior Services during a visit arranged by Brian Robinson, director of Leisure Services. Martin shared that her “passion for Wisconsin agriculture” began while growing up in Milton on a family dairy farm for 150 to 200 Holstein cows. Shown above and below are some scenes from Martin’s visit.

Martin shared that her “passion for Wisconsin agriculture” began while growing up in Milton on a family dairy farm for 150 to 200 Holstein cows.

She began showing cows at the Rock County Fair when just seven years old, later showing her favorite cow of all time, “Always,” at the Wisconsin State Fair.

In addition to being active in FFA, Martin attributed the development of “a lot of my communication skills” to “Standing up in front of a room full of people and being able to talk at a 4-H club meeting.”

She earned a bachelor’s degree at the University of Wisconsin-Madison where she also worked in the Babcock Hall Dairy Store and learned to make cheese.

Alice in Dairyland began in 1948 as a beauty pageant at the centennial exposition of the Wisconsin State Fair.

Very quickly, the role of Alice changed to a professional public relations role promoting the multi-faceted agricultural industry in Wisconsin where, Martin noted, “One of nine jobs in Wisconsin is related to agriculture.”

Martin serves as an employee of the Wisconsin Department of Agriculture, Trade and Consumer Protection during her year-long reign as Alice in Dairyland that began in June 2019.

Traveling up to 40,000 miles throughout Wisconsin in a van powered by ethanol fuel that Martin named “Kernel,” her goals include 60 television appearances, along with 120 radio interviews and 1,000 social media posts.

During her year of service, she also provides educational programming, in conjunction with the Dairy Farmers of Wisconsin, to thousands of Wisconsin grade-school children.

Martin shared her pride in “connecting with an urban audience” during the 11-day run of the Wisconsin State Fair that included demonstrating milking a cow, as well as participating in the World Dairy Expo in Madison, the world’s largest dairy trade show.

She described several of the “industry tours” she participates in, including visits to potato, sheep and Christmas tree farms; cranberry bogs, and ethanol production facilities.

“It is the diversity of agriculture that makes Wisconsin so special,” Martin told her audience. “We are an agricultural rock star. We lead the nation in many agricultural commodities … cheese, and milk goats, and green beans, corn for silage, mink pelts, cranberries, ginseng and so much more.”

During her presentation, Martin highlighted several Wisconsin agricultural industries, often including fun facts. She pointed to Wisconsin native quartz gemstones that are part of her tiara and brooch as part of the history of mining in Wisconsin.

Noting that 600 styles, types and varieties of cheese are produced in the state, she said “90 percent of the milk that we produce in our state turns into cheese. Ninety percent of the cheese that we make leaves our state. So, people all over the world are enjoying Wisconsin cheese. Wisconsin receives more awards for cheese than any other state.”

Martini admitted that her favorite cheese is “juustoleipä,” also known as “bread cheese.”

Describing cranberries as “our state fruit,” she shared that Wisconsin produces 64 percent of the nation’s supply of cranberries and 95 percent of the country’s production of ginseng, mostly exported to Asia and China for use in medicines, soups, teas and as an energy supplement.

In sharing information about Wisconsin’s mink industry, she reported that minks eat the bi-products of meat packing and cheese production “that would otherwise be in a landfill,” and that mink carcasses are used in the pet food industry as crab bait, or as a source of oil for skin care products.

Applauding “not only the quantity but also the quality of products that are grown in our state,” Martin said Wisconsin’s $104.8 billion agricultural industry is “reaching all corners of the globe” in exportation to more than 140 countries.

This is the first time that Walworth County will be the location for the selection of the next “Alice in Dairyland” in May, 2020. Accordingly, as the current Alice, Martin has been spending at least one day a month in Walworth County making agricultural industry tours.

“Walworth County has a really unique opportunity to connect with consumers that are very urban and from Chicago suburbs,” she added.