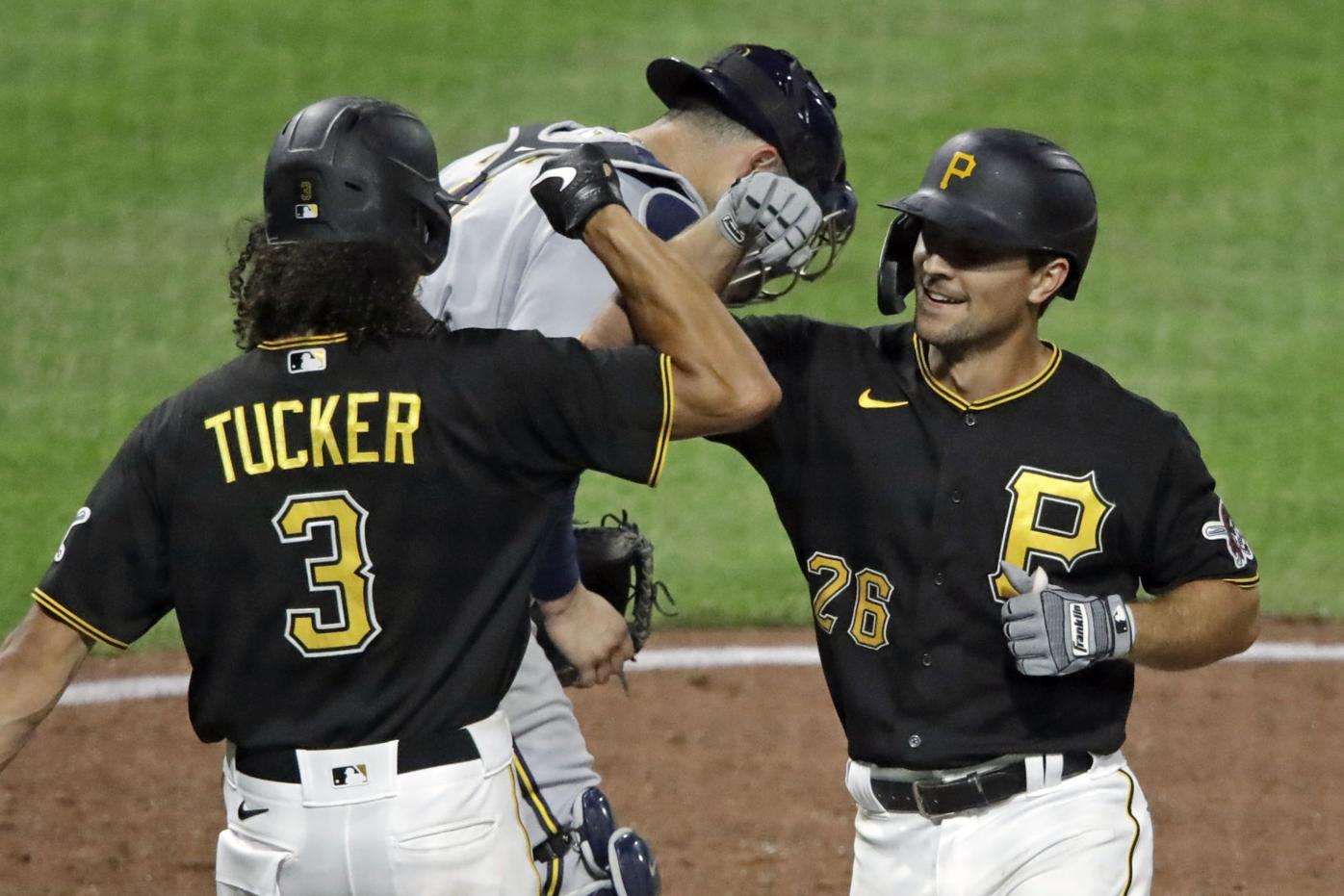 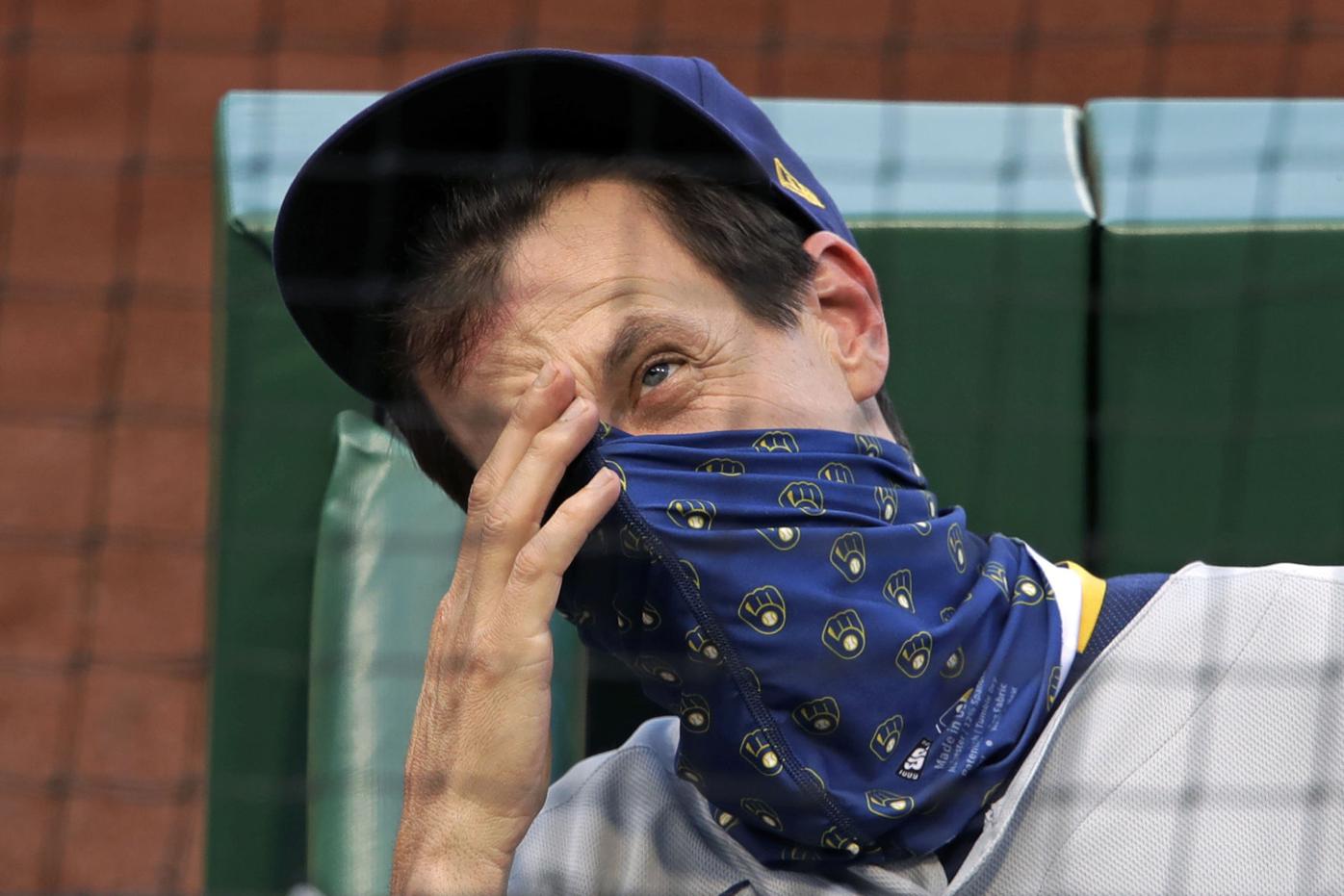 Milwaukee Brewers manager Craig Counsell stands in the dugout before a baseball game against the Pittsburgh Pirates in Pittsburgh, Tuesday, July 28, 2020.

Milwaukee Brewers manager Craig Counsell stands in the dugout before a baseball game against the Pittsburgh Pirates in Pittsburgh, Tuesday, July 28, 2020.

PITTSBURGH — Adam Frazier hit a tiebreaking two-run homer in the eighth inning, and the Pittsburgh Pirates rallied for an 8-6 victory over the Milwaukee Brewers on Tuesday night.

A day after blowing a four-run lead in the ninth in what became an 11-inning loss, Pittsburgh delivered a bit of payback thanks to a shaky performance by the Milwaukee bullpen.

Cole Tucker went 2 for 4 for the Pirates, including a double leading off the eighth against Bobby Wahl (0-1). With one out and Tucker on third, Frazier sent the second pitch he saw from Wahl halfway up one of the tarps covering the seats in right field at empty PNC Park.

Geoff Hartlieb (1-0) picked up his first major league win after being called up earlier in the afternoon. Nick Burdi worked around a leadoff walk in the ninth to collect the first save of his career.

Keston Hiura hit a two-run drive in the sixth and a sacrifice fly in the seventh as part of a four-run burst that gave the Brewers a 6-2 lead. Pittsburgh responded immediately, tying it on the bottom of the inning thanks in part to a throwing error by Milwaukee first baseman Justin Smoak with the bases loaded that allowed two runs to score.

Brewers star Christian Yelich’s rough start continued. The 2018 NL MVP is hitting just .045 (1 for 22) after going 0 for 4. Pittsburgh left fielder Bryan Reynolds ended an 0 for 13 skid by going 2 for 4. Reynolds also threw out Milwaukee’s Ryan Braun at the plate in the top of the eighth when Braun represented the go-ahead run.

Milwaukee starter Josh Lindblom lasted 3 2/3 innings in his return to the major leagues following two years in the Korean Baseball Organization, where won the league’s version of the Cy Young Award in 2019. Lindblom gave up two runs and three hits before exiting with what the team called “back cramps.”

Derek Holland threw 5 2/3 innings in his first start for the Pirates after making the team as a non-roster invitee. The 11-year veteran surrendered two runs and two hits before both bullpens turned things into a bit of a mess.

Brewers: LHP Brett Anderson will make his first start for the Brewers on Friday in the home opener against St. Louis. Anderson was scheduled to start on opening day before going on the injured list with a blister on the index finger of his left hand.

Brewers: RHP Brandon Woodruff (0-1) makes his second start of the season when the series wraps up Wednesday. Woodruff allowed two runs in five innings in a 3-0 loss to the Chicago Cubs on opening day. Woodruff is 2-1 with a 5.07 ERA in seven career appearances against Pittsburgh.

Pirates: RHP Joe Musgrove (0-1) will try to bounce back from an opening-day loss to St. Louis last Friday. Musgrove is 0-1 with a 6.46 ERA against the Brewers.

Copyright 2020 The Associated Press. All rights reserved. This material may not be published, broadcast, rewritten or redistributed without permission.