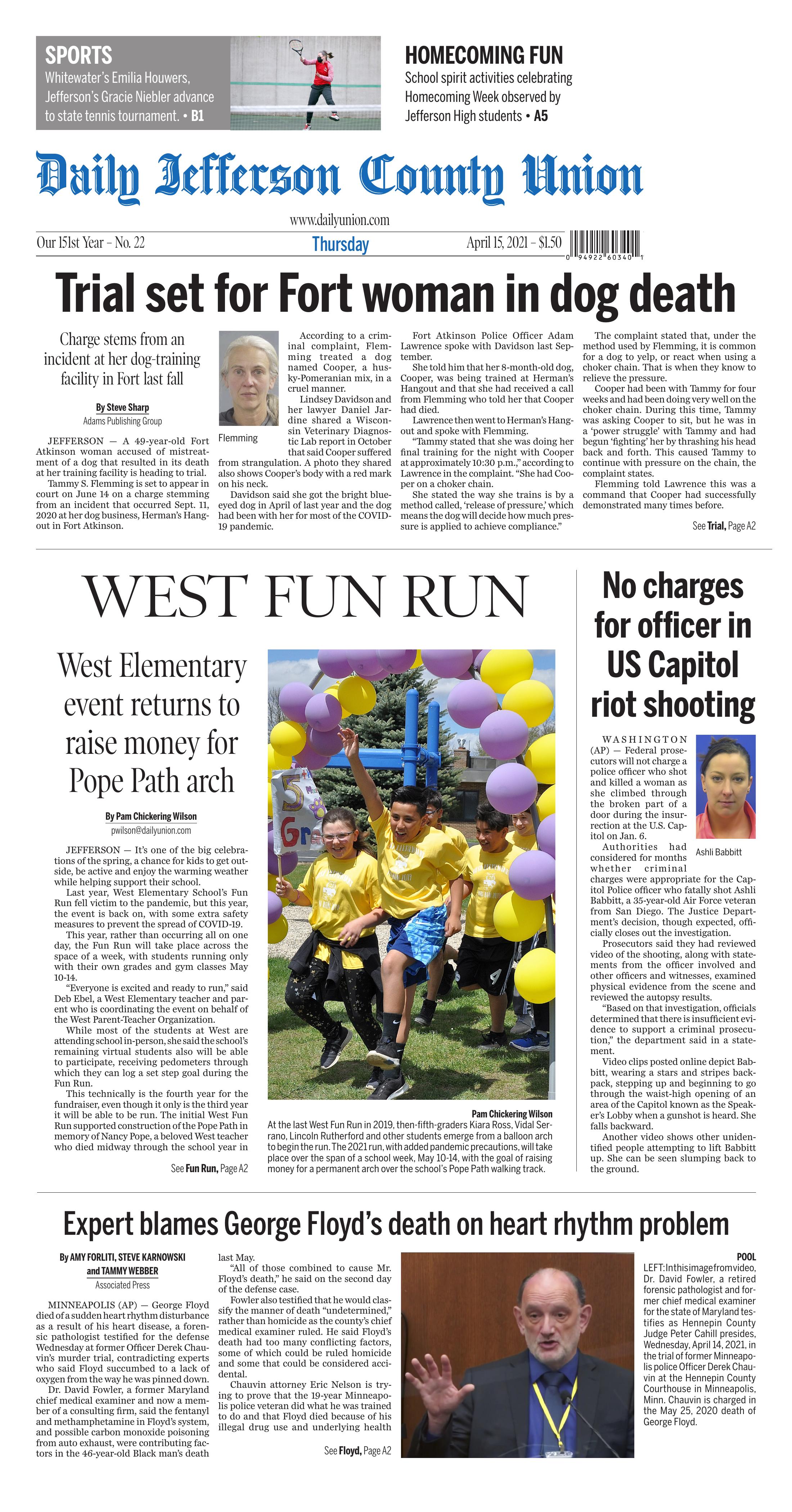 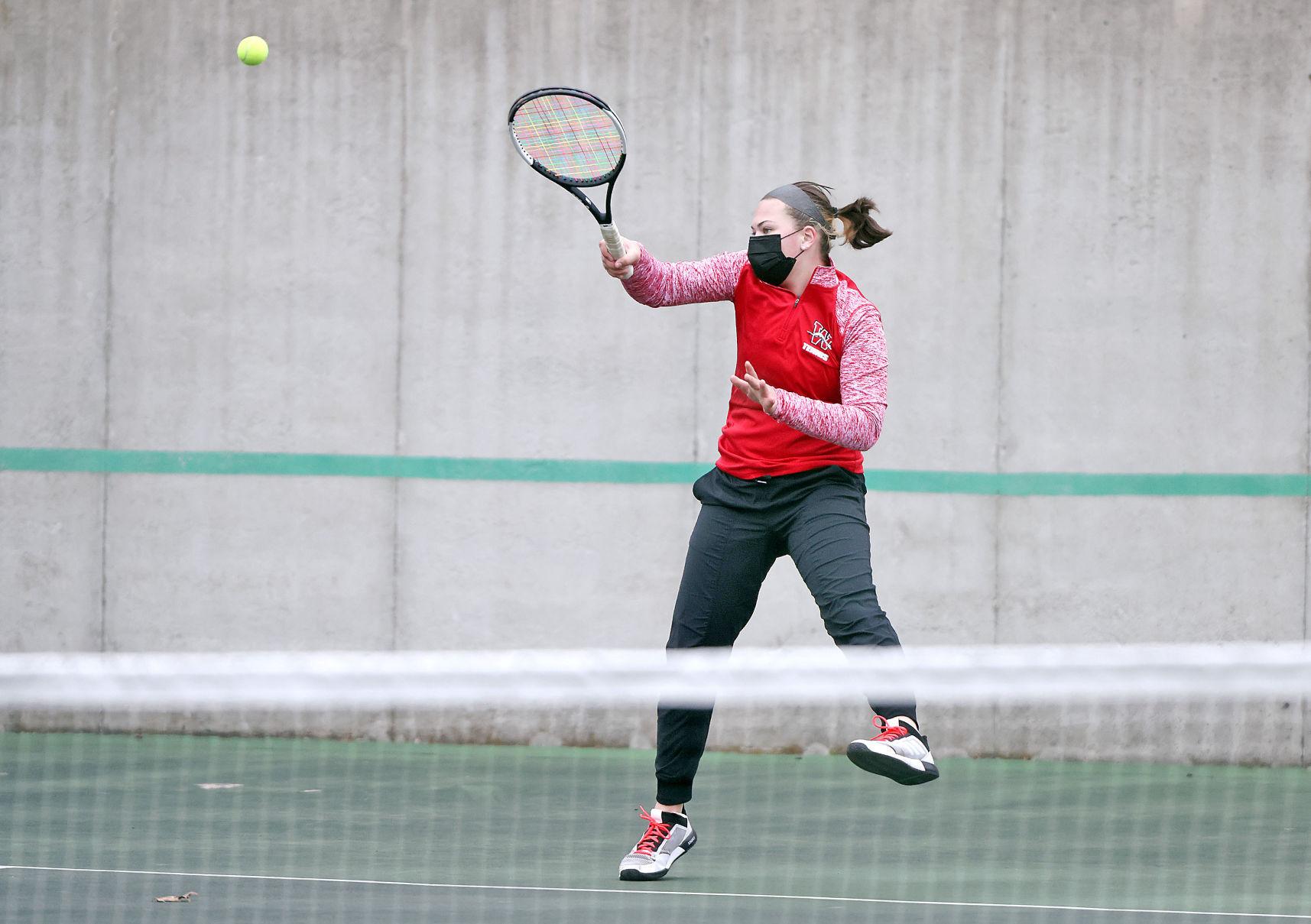 JEFFERSON — A 49-year-old Fort Atkinson woman accused of mistreatment of a dog that resulted in its death at her training facility is heading to trial.

Tammy S. Flemming is set to appear in court on June 14 on a charge stemming from an incident that occurred Sept. 11, 2020 at her dog business, Herman’s Hangout in Fort Atkinson.

According to a criminal complaint, Flemming treated a dog named Cooper, a husky-Pomeranian mix, in a cruel manner.

Lindsey Davidson, from Janesville, and her lawyer Daniel Jardine shared a Wisconsin Veterinary Diagnostic Lab report in October that said Cooper suffered from strangulation. A photo they shared also shows Cooper’s body with a red mark on his neck.

Davidson said she got the bright blue-eyed dog in April of last year and the dog had been with her for most of the COVID-19 pandemic.

She told him that her 8-month-old dog, Cooper, was being trained at Herman’s Hangout and that she had received a call from Flemming who told her that Cooper had died.

Lawrence then went to Herman’s Hangout and spoke with Flemming.

“Tammy stated that she was doing her final training for the night with Cooper at approximately 10:30 p.m.,” according to Lawrence in the complaint. “She had Cooper on a choker chain.

She stated the way she trains is by a method called, ‘release of pressure,’ which means the dog will decide how much pressure is applied to achieve compliance.”

The complaint stated that, under the method used by Flemming, it is common for a dog to yelp, or react when using a choker chain. That is when they know to relieve the pressure.

Cooper had been with Tammy for four weeks and had been doing very well on the choker chain. During this time, Tammy was asking Cooper to sit, but he was in a ‘power struggle’ with Tammy and had begun ‘fighting’ her by thrashing his head back and forth. This caused Tammy to continue with pressure on the chain, the complaint states.

Flemming told Lawrence this was a command that Cooper had successfully demonstrated many times before.

“She attempted to give a loud verbal command to gain compliance and stop the thrashing,” according to Lawrence and the complaint. “This did not work and Cooper kept ‘fighting.’ Tammy noticed Cooper’s back legs became weak and she then released the chain.

Flemming watched Cooper and observed he began to breathe shallow and slowly. She then began to give Cooper mouth-to-mouth and chest compressions. Her attempts to save Cooper were unsuccessful and Cooper died, according to the complaint.

Flemming told Lawrence that she did not recognize that Cooper was in trouble.

“I asked Tammy what she believed happened to Cooper,” Lawrence said in the complaint.

Flemming said she believed he had an adrenaline rush and was possibly over-exerted, but she did not recognize it soon enough.

A necropsy was performed on Cooper by veterinarian Philip N. Bochsler at the University of Wisconsin Veterinary Diagnostic Lab. Bochsler produced a report indicating findings in the case were consistent with strangulation.

“Dr. Bochsler noted that Cooper, ‘had a band of skin redness encircling most of the neck’ which was ‘causally consistent with the presence of a tight, constricting band or ligature, such as a sliding loop of rope, cord, chain or a pinch/choke collar,” the complaint said. “When overly tight, this loop would compress/collapse the trachea, and compress/occlude the carotid arteries and the jugular veins, resulting in strangulation.’”

Flemming is free on a $1,000 signature bond, with conditions that she not engage in any type of animal training or boarding and not care for any animal she does not own.

If convicted, Flemming could face a fine of up to $10,000 and three years and six months in jail.

Then-fifth graders take part in the last West Fun Run fundraiser in 2019. The 2021 run, with added pandemic precautions, will take place over the span of a school week, May 10-14, with the goal of raising money for a permanent arch over the school’s Pope Path walking track.

At the last West Fun Run in 2019, then-fifth-graders Kiara Ross, Vidal Serrano, Lincoln Rutherford and other students emerge from a balloon arch to begin the run. The 2021 run, with added pandemic precautions, will take place over the span of a school week, May 10-14, with the goal of raising money for a permanent arch over the school’s Pope Path walking track.

JEFFERSON — It’s one of the big celebrations of the spring, a chance for kids to get outside, be active and enjoy the warming weather while helping support their school.

Last year, West Elementary School’s Fun Run fell victim to the pandemic, but this year, the event is back on, with some extra safety measures to prevent the spread of COVID-19.

This year, rather than occurring all on one day, the Fun Run will take place across the space of a week, with students running only with their own grades and gym classes May 10-14.

“Everyone is excited and ready to run,” said Deb Ebel, a West Elementary teacher and parent who is coordinating the event on behalf of the West Parent-Teacher Organization.

While most of the students at West are attending school in-person, she said the school’s remaining virtual students also will be able to participate, receiving pedometers through which they can log a set step goal during the Fun Run.

This technically is the fourth year for the fundraiser, even though it only is the third year it will be able to be run. The initial West Fun Run supported construction of the Pope Path in memory of Nancy Pope, a beloved West teacher who died midway through the school year in 2017, not long after being diagnosed with an aggressive form of cancer.

Successive West Fun Runs have provided additional funds for improvements to the area of the walking path and adjacent playground.

This year, most of the proceeds from the run will be designated to create an arch over the Pope Path marking the starting/ending point for a lap.

The theme for this year’s run will be the Olympics, inspired by the planned contest in Tokyo, and all students will receive T-shirts in red, white and blue.

The school will be holding a kickoff for the fundraiser yet this month, introducing students to the run and the goal for this year.

Pandemic precautions necessitate that the kickoff run a little differently than in past years, however. Rather than having a big assembly in the gym, the school is putting together a slide show, with the help of district librarian and tech guru Kevin Schmitz and the fifth-graders, which will be shared in each classroom.

This year’s fundraising goal is $15,000. The majority of the proceeds will go toward the arch at the start of the Pope Path. Any funds left over will go toward general resources needed by the school but which are not in the regular budget.

Each year, the fifth-graders also dedicate a portion of the funds they raise toward a special project, such as the bench they purchased for the playground a couple of years ago.

This year, fifth-grade student leaders are looking at replacing shelving for the playground equipment (like balls, etc.) as the school’s existing shelving is not very sturdy anymore.

Ebel said that again this year the PTO has taken the lead in coordinating the school fundraiser, but due to the pandemic which has strictly limited visitors to the school, staff members really have stepped up to handle the details of the run.

“Even our paraprofessionals have pitched in, gathering materials and getting things ready to go,” Ebel said.

Also providing essential support for the run has been Fort HealthCare, which donated money for T-shirts for all of the students and pedometers for the virtual students.

If the school meets its fundraising goal, a celebration is planned for a later date.

“Typically, Mr. (West principal Mike) Howard agrees to do something if the students make the goal,” Ebel said. “This year, he has agreed to be turned into an ice cream sundae.”

She explained that process would involve Howard in a kiddie pool outside — wearing goggles for protection — and students getting the opportunity to cover him in “toppings” like whipped cream and chocolate sauce.

If all goes as expected, construction on the new arch for the Pope Path would take place over the summer, with an anticipated dedication in the fall.

People who would like to contribute to the effort can do so by contacting any family with a student at West Elementary School. To donate independently and not be connected to a particular student, people can contact the West PTO by email at jeffersonwestelementarypto@gmail.com.