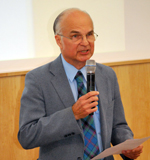 WHITEWATER - About 100 people gathered on Thursday to hear MoveToAmend.org co-found­er David Cobb speak on the organization's goal of passing a Constitutional amendment to revoke "corporate personhood" and to abolish the concept that money equals speech.

Cobb spoke in the Timmerman Auditorium on the University of Wisconsin-Whitewater campus. His was a precursor to this weekend's Midwest Regional Convergence in Milwaukee, at which Cobb will be meeting with and holding training sessions for MoveToAmend.org regional leaders.

The program was sponsored by the Jefferson County Area Wisconsin Affiliate of www.MoveToAmend.org, and he was introduced by affiliate member Daniel Fary.

Cobb worked as a laborer, became a trial lawyer, ran a private practice and then became "an engaged citizen," Fary said. In 2004, Cobb ran for president on the Green Party ticket. He is the grandson of a Baptist preacher, and his mother was an activist for the Equal Rights Amendment.

Cobb spoke for about one hour, and then answered audience questions for another hour. In total, he answered 13 questions from attendees.

In short, his presentation was a combination of world history, Constitutional history, dramatic narrative and political connect-the-dots. Cobb provided an overview of corporate history in the United States and individual rights in the Constitution, and how Supreme Court rulings such as Citizens United and others like it, coupled with various other legislative decisions, have led to corporate entities being granted rights that are not in the Constitution, thus leading to excessive political and economic power.

Cobb opened by stating the current state of affairs has led to "righteous anger."

"Righteous anger is a unique type of anger," he explained. "It can only be fueled by injustice, oppression and exploitation. Further, if you get angry at injustice, oppression and exploitation, but all you do is stew in it, that is not righteous. Righteous anger requires action. You have to commit yourself to act against injustice and unfairness and for justice. When you do that, you transform your anger to joy."

Now, Cobb argued, is the time for righteous anger once more, to combat "trans-national corporations" that have led to new rounds of injustice, oppression and exploitation.

"In this generation, we have the ability to transform the political, economic and social institutions in which we live," he said. "We don't need to; we have to. The fact is, this generation is living with a series of interconnected crisis."

Cobb claimed outright that corporations are "ruling us."

"Unaccountable corporate CEOs are making the decisions that affect all of our lives," he said. "Corporate CEOs have already decided the energy policy of this country; CEOs have decided what your transportation options are going to be; CEOs have decided how much healthcare you are going to get; CEOs decided to take this country into war. We, the people, get to choose between paper or plastic, Coke or Pepsi, or 17 flavors of toothpaste. I am not against consumer choices, but I am saying that real political power means the opportunity to participate in a meaningful way in the kinds of decisions that are affecting our life on the day-to-day."

Cobb next discussed four points that ultimately would reveal his historical reasons for trying to amend the Constitution: democracy, sovereignty, legal personhood, and corporations and their etymologies.

Democracy, from the Greek, means "people rule" and sovereignty means "authority to rule."

Cobb noted that sovereignty was claim by a king, who claimed his right to rule from God, the ultimate authority.

"Five-hundred years ago, people did not laugh at the idea someone had divine right; that was an idea that was too hard to overcome," he said. "When people tell me it is too hard to amend the Constitution, I tell them we have the power to change reality.

"Over the last 25 years, people have forgotten how much power we have when we act collectively," he said. "Think back to the abolitionists, women's suffrage, the civil rights movement. Think of the changes they made. You know what? They were no different than us. We have a tendency to raise them up, and that is fine to honor them, but they were just normal folks, just like us. Normal Americans doing extraordinary things."

That led to his next point of "legal personhood," which simply means the ability to assert rights under law.

"There were real struggles in communities to decide who had rights," Cobb said. "This is not just an intellectual curiosity; this matters."

That led to his final point on corporations.

"Corporation, from the Latin, means 'body' and 'to have or create,' so a corporation is a created body," he said. "A corporation is a legal fiction. That begs the question, fiction means not true or made up. Corporations do not exist in the physical, real world, but we will pretend that a group of people, and resources, and contractual obligations, and cultural assumptions, can exist under law so it can do certain things under the law."

The modern corporation came about during the Age of Discovery, primarily out of Europe, such as the East India Company and the Africa Trading Company. Cobb said these corporations were among the first to have profit-seeking shareholders. In fact, some of the United States' earliest colonies, like Massachusetts, originally were formed as a corporation.

"The king created the corporation by a charter, a piece of paper," he said. "The king assigned a royal governor of Massachusetts to benefit the king but also the Massachusetts Bay Company. The state began on the same model as the East India Company to take resources out of the existing land to send them back as shareholder wealth. Virginia was founded by a similar corporation, and Georgia was founded by a penal corporation. What do we call a royal governor today? A CEO."

Cobb noted that the Boston Tea Party was a revolt against the corporation model that existed in Massachusetts.

"The Boston Tea Party was a form of civil disobedience perpetrated by patriots against a runaway corporation because the corporation was administering unfair rules," he said. "The Boston Tea Party was not just against the king, or taxation without representation, but unfair international business rules passed by the English Parliament that favored the East India Company over colonists. Guess how many members of Parliament owned shares in the East India Company? All of them."

After the American Revolution, the country established the Constitution in 1789, and that led to the conclusive points Cobb was leading to throughout his presentation.

Cobb explained that the Constitution was a system chartered by the sovereignty of "We the people," who have inalienable rights and who created "the government," which is subordinate and accountable to the people.

"We have rights, but the government has duties and responsibilities," Cobb said. "All power resides with the people. However, the people delegated some power to the government. How much? Only enough to do the duties that we, the people, said they can do. This is limited government, and they can't violate private rights. How is this power discharged? By the government passing laws in the public interest."

Cobb noted that in 1789, only wealthy white males were considered persons of public interest.

"The great historian Howard Zinn said the most important way to understand the United States is the actual struggle of human beings to be defined as persons to have rights under our Constitution," he said.

Cobb next explained that the formation of a corporation is easier today, but it used to have passage in both statehouses and signed by governors.

"That means that the formation of a corporation had the same process as passing a bill into law," he said. "A corporation was privilege, not a right, and that was just the mechanics. If you were granted a charter, all you could do was meet the specific need you identified. If you went beyond their authority, the charter was revoked."

"Five members of the Supreme Court said that even though corporations are not mentioned in the Constitution, in an act of judicial activism, they decided to insist we treat a corporation as a person with rights," Cobb concluded.

This action, he noted, has allowed corporations to become part of our country's sovereignty.

"Corporations having Constitutional rights is the lynchpin for how the ruling elite have hijacked our sacred authority to govern ourselves," he said. "What makes me so angry is that they use our legal system to legalize and legitimize the theft of America's democratic republic. I say 'enough already.' It is time for people to come together on this principle."

"I am not against corporations, but this idea that corporations have Constitutional rights is stupid," Cobb said. "When ordinary people come together, throughout history, they have made profound changes to the country, and we can do it too."

Afterward, Cobb commented on the attendance of Thursday's event.

"This is about an average size," he said. "A really good presentation gets about 150 people, but I get between 50 and 75 almost everywhere I go. I want to point out that I am not famous. People are not coming out to see a famous celebrity. They are coming out in good, enthusiastic numbers to hear how they can plug into a regular citizen's movement."

Fary announced that anyone interested in becoming involved at the local level is invited to attend meetings at 7 p.m. on the fourth Wednesday of each month in the Community Room of the Dwight Foster Public Library in Fort Atkinson.