You are the owner of this article.
Edit Article Add New Article
1 of 6 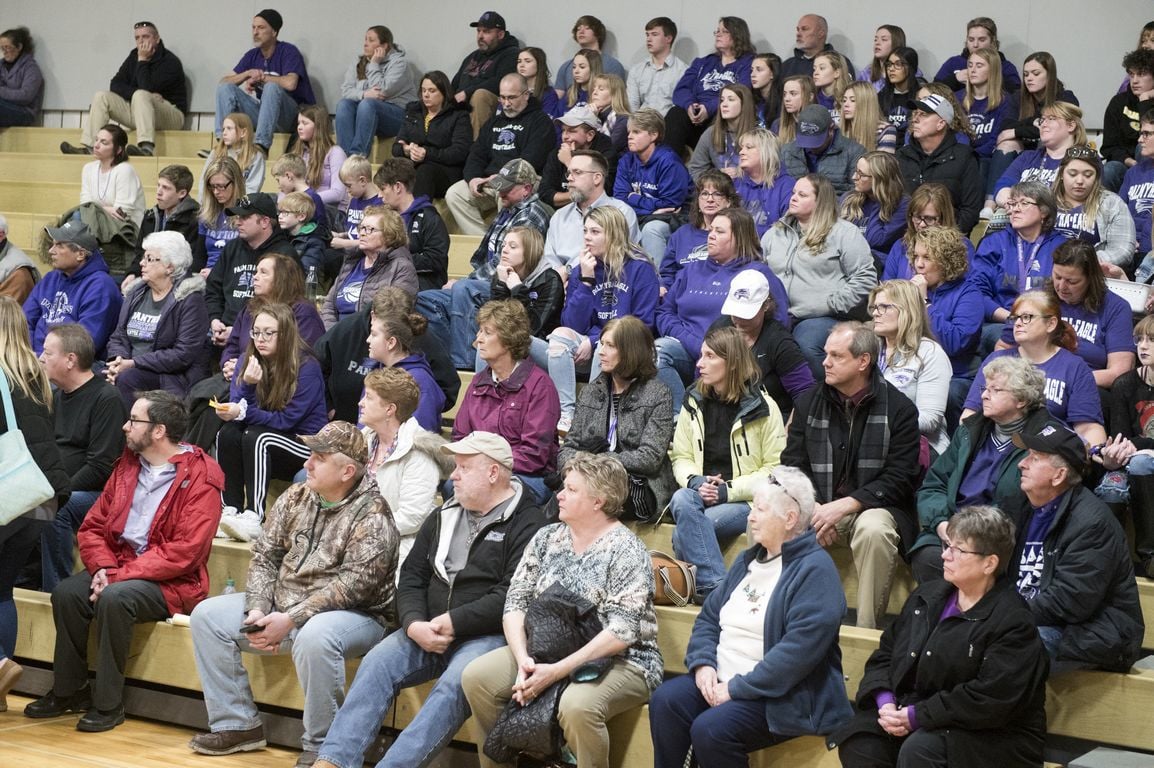 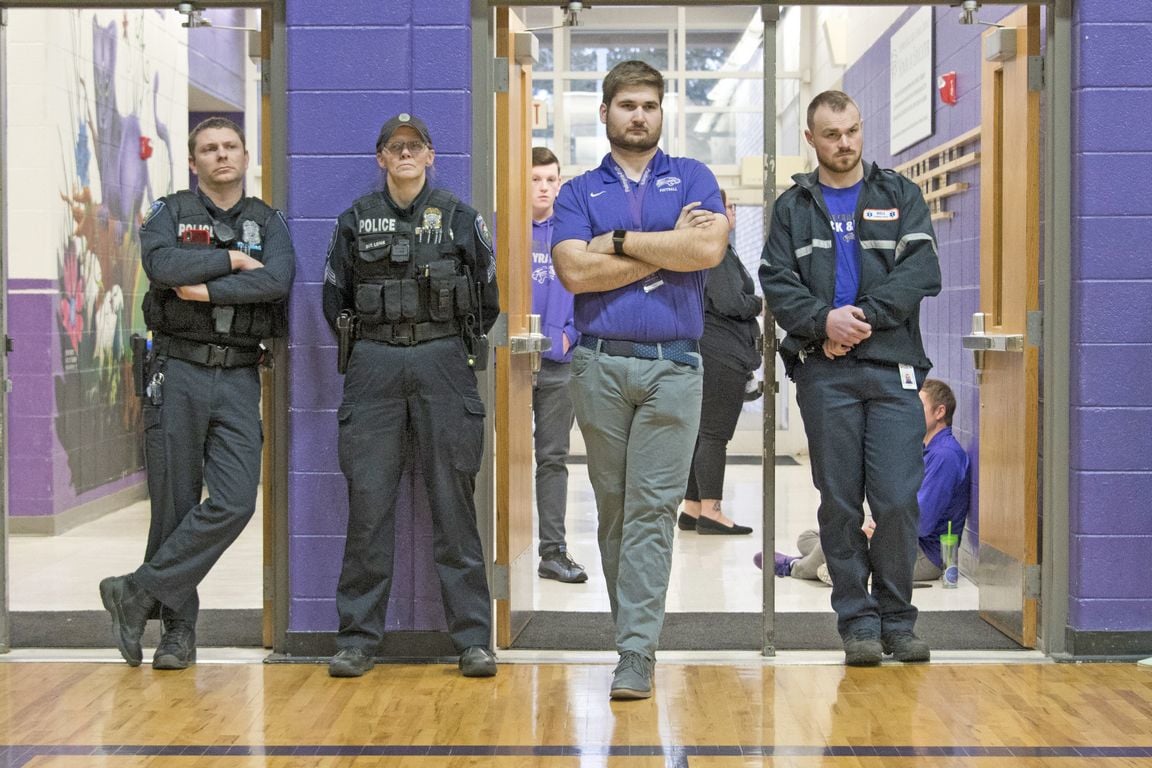 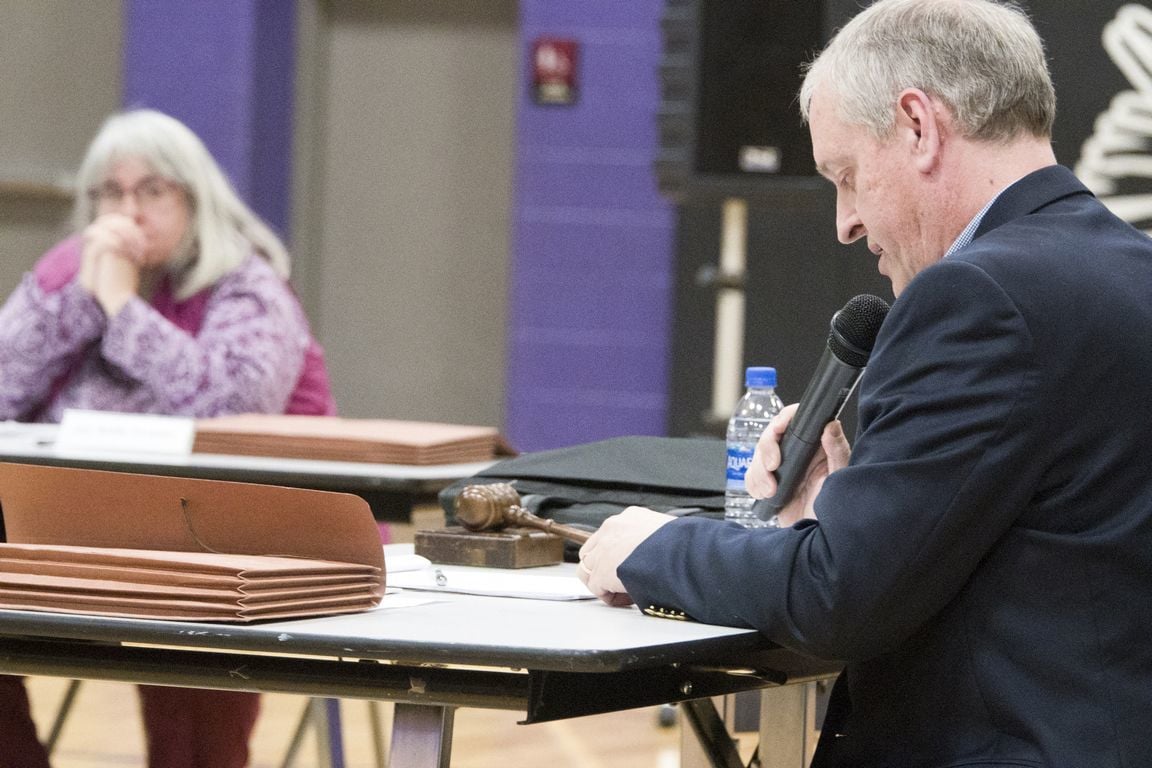 Palmyra-Eagle Area School District residents react with joy after the state School District Boundary Appeals Board on Thursday voted 6-1 to not dissolve the school district. 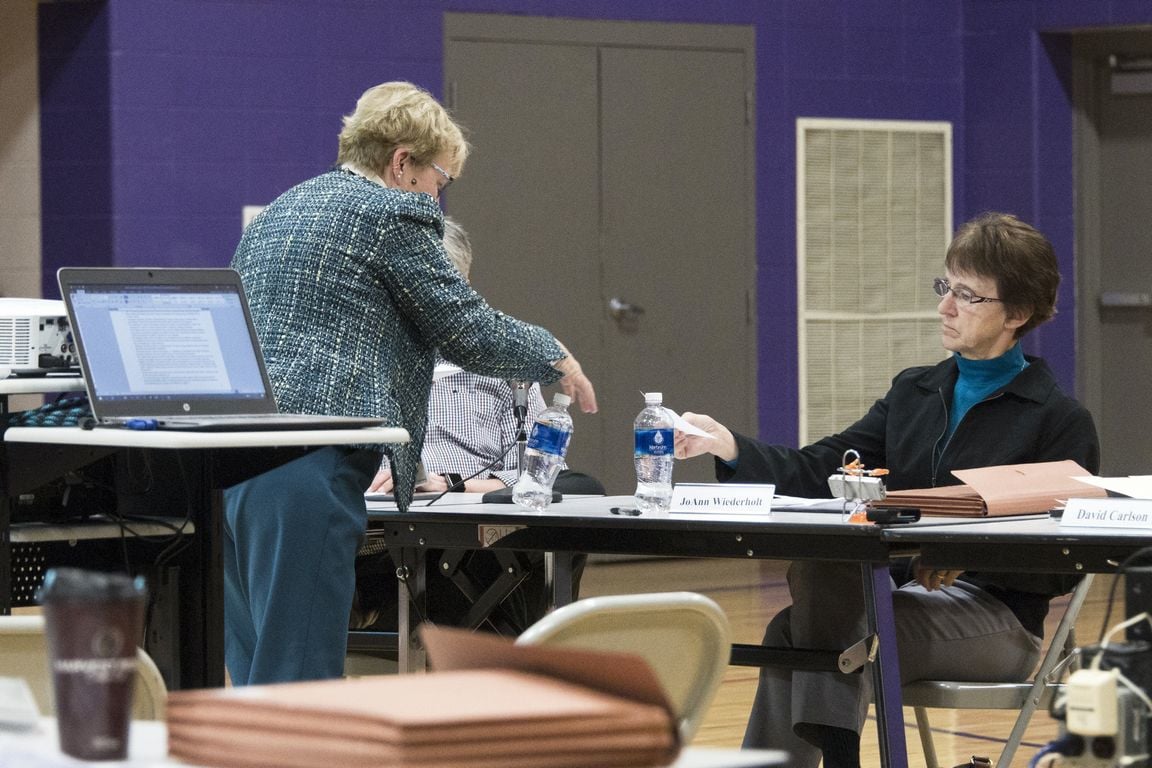 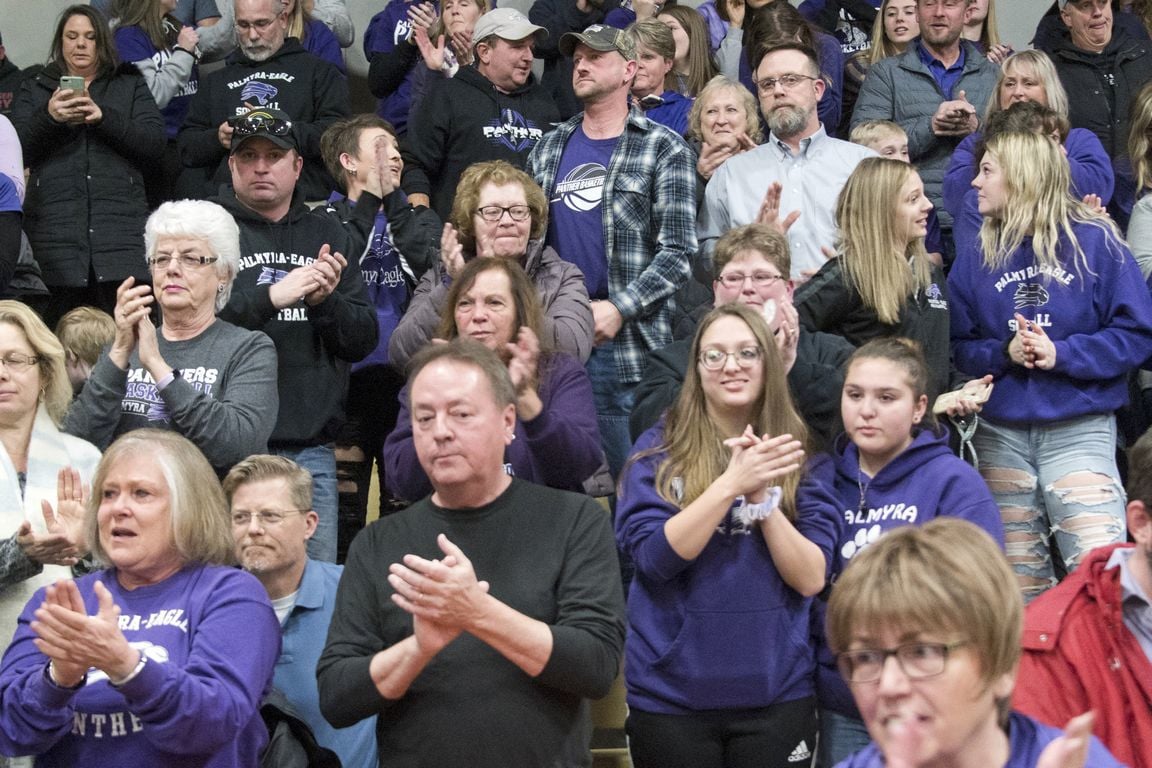 Palmyra-Eagle Area School District residents react with joy after the state School District Boundary Appeals Board on Thursday voted 6-1 to not dissolve the school district.

Seated shoulder to shoulder in a packed gymnasium, the crowd erupted in cheers and applause following a 6-1 vote to deny dissolving the district.

Following the vote, Christine Holcomb, the parent of a second-grader in the district, fought back tears as she summed up what this means to her and other families who have fought to keep the doors to their schools open.

Her mother, Donna, also fought back tears, saying that five generations of their family have attended Palmyra-Eagle schools.

“I have been here for 30 years. This is my home,” said Boos, who is a paraprofessional for the district. “These kids deserve it.”

Boos said her sister also is a teacher in the district and has a birthday Friday, and she couldn’t think of a better gift.

The state board’s vote came shortly after an hour of going through the process of how it would proceed. A motion to vote on denying the dissolving of the district was made by Katie Maloney, of the Green Bay Area School District.

After all seven board members cast paper ballots, the votes were read one-by-one, with the lone “no” vote cast by David Carlson, the state superintendent’s designee.

“The School District Boundary Appeals Board decided today to deny the proposal to dissolve the Palmyra-Eagle Area School District,” she said. “State law dictated the criteria for the decision and the makeup of the board: six locally elected school board members from across Wisconsin, plus my designee. Faced with a question that had no perfect answer, the seven-member group heard hours of passionate testimony from people whose lives will be impacted. My designee, David Carlson, voted to affirm dissolution, which I support, based on the local school board’s decision, and the affirmation of the advisory referendum.

“The board’s majority laid out the reasoning for their decision in the motion they passed,” she added, referring to the state appeals panel. “Each board member based their decision on what they believed was in the best interest of the educational welfare of all area students. Thank you to the board members for your work and thoughtful deliberation throughout the process.”

Now, the process of moving forward will be a long and difficult one for Palmyra-Eagle, which has become financially unstable.

Its debt has ballooned to $12.8 million that would have followed students to new districts had Palmyra-Eagle been dissolved. The district must find ways to pay that debt.

But a larger issue is what to do to change district residents’ minds when it comes time to vote on a future referendum to keep the schools operating. Out of the last 16 referendums in the district, only two have been successful.

Throughout this process, there were plenty of emotions on both sides. And part of that played into the decision by the board.

“We really can’t discount the emotions,” said Tom Weber, a voting board member from the Sun Prairie School District, said when talking last Friday about people in the communities who are affected by this decision.

Those emotions surfaced at previous meetings as well, when the board listened to community members on both sides of the issue.

During the past few weeks, each voting member on the state board took a turn addressing seven criteria that look at plans to follow should the district be dissolved or not.

The board talked about districts surrounding Palmyra and how a dissolved district would affect them, with several board members questioning that moving any of the Palmyra-Eagle students to the Whitewater Unified School District is a good idea. They said a large number of extra students could strain that district.

Only three students from the Palmyra area currently open-enroll into the Whitewater schools.

The board members also took turns discussing topics such as an east-west split where half of the Palmyra-Eagle students would go to the Mukwonago School District and the other half to Whitewater. Another option involved the East Troy School District, but there was little discussion on that option last week.

There also was talk of redrawing boundary lines that could send students to various districts.

But with all the talk, there appeared to be no simple answers.

When giving a reason why she chose to deny the dissolving of the district, Maloney said her biggest concern was for all the students in all the districts that would be affected by any decision to dissolve.

“I think the dissolving process is rushed,” she said, adding that the system does not allow proper time to find the best solution.

So, she said, the board proceeded in a manner that mitigated damage to all the districts involved.

Before the vote, board member Cliff Gerbers, from the Gillett School District, asked if the Palmyra-Eagle School Board could vote to dissolve again — and the answers was yes.

After Jan. 15, the board can file again and have a vote by summer. Then the process would start again.

During the discussion last Friday, no input was allowed from community members who showed up to watch in the audience. But the board did call one group of people up to talk more about their plans to help save the district. That group answered questions ranging from where budget cuts would come from if the district stayed open to dealing with the current school board.

Meanwhile, eight people are running for three school board positions that will be up for election in Palmyra-Eagle in April. A primary election will be held in February to narrow the field to six.

Before Thursday’s vote, the School District Boundary Appeals Board laid out the four options on which members could vote. The first was to deny dissolving of the district. The second option was to split the district between the Mukwonago and Whitewater school districts. The third option involved the East Troy School District and the fourth would have sent all the students to Mukwonago.

Since a motion was made only on the first option to deny dissolving the district, the crowd waited extremely quietly for the board to say anything. After the vote, the crowd was informed that was the last step and the cheering began.

Now, Palmyra-Eagle residents will have to wait and see what happens next, with the February primary and April election coming up for the school board.

The question of whether to dissolve the school district heated up during the April 2019 election when voters shot down a nonrecurring four-year operational referendum that asked residents for $1.75 million the first year and climbed each year until reaching $4 million the fourth year.

But it also was split down county lines, with the school district touching parts of Jefferson, Walworth and Waukesha counties.

There were 1,453 “no” votes from Waukesha County residents alone, with Jefferson County electors overall in favor of the April referendum.

A second, nonbinding referendum was held in November that asked if the district would support the school, and that also failed.

Weber pointed out that open enrollment is one of the larger factors in talking about the issues that this district had faced.

Since 2009, Palmyra-Eagle has had one of the highest open-enrollment numbers in the state, with almost 40 percent of students leaving during that time, according to state figures.

“I think one time there was not an understanding for a need for change,” Weber said.

This decision by the board now gives the community that time to make changes.

“It’s great for our community. Our school knows they have a lot of work cut out for them,” said Gigi Laine, who works at the school district as staff support and also has two children in the district. “But they have a community that will support them.

Palmyra-Eagle survives and a GoFundMe Campaign

Palmyra-Eagle dissolution from 2018 to today

From the time the operational referendum for the Palmyra-Eagle Area School District was planned in Nov. 2018 to the final vote by the School D…