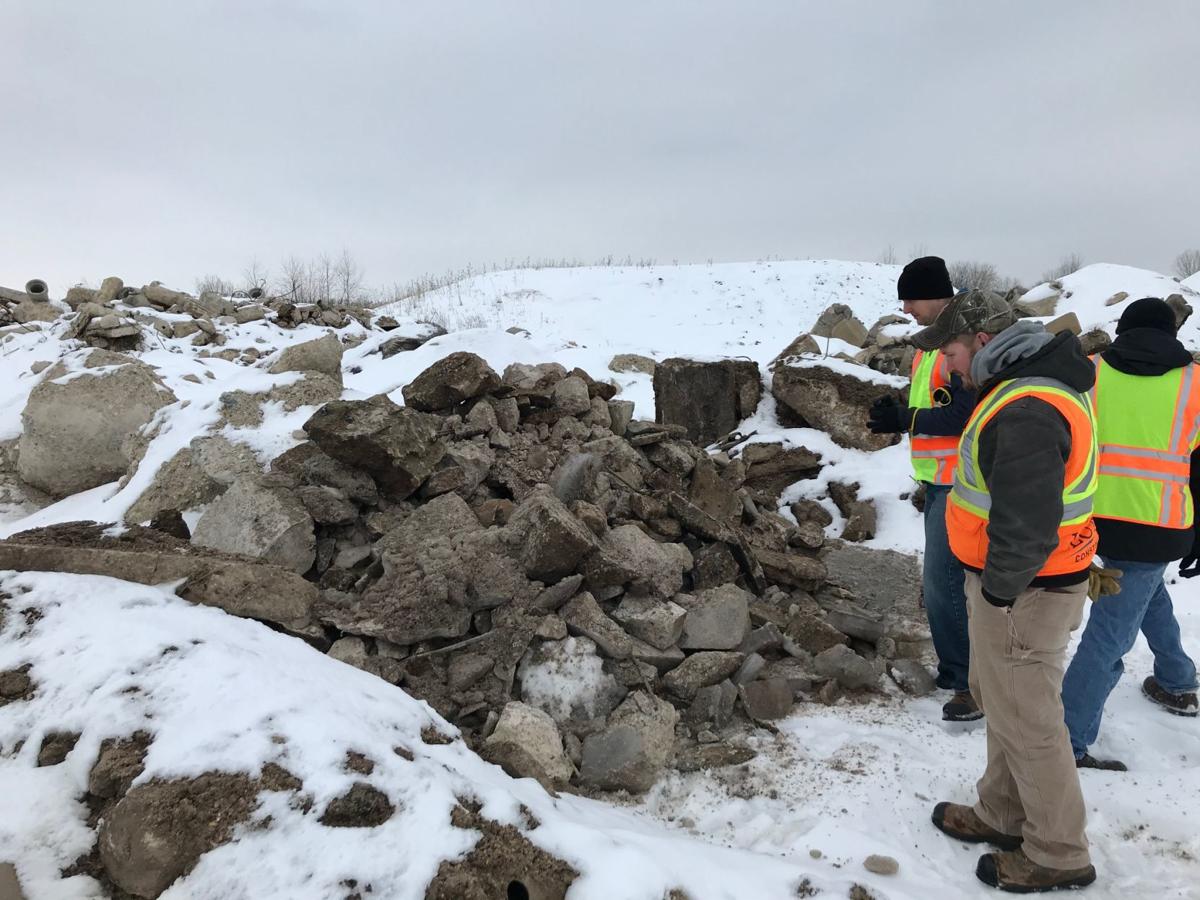 Lunda Construction crew workers survey the debris which was removed from the Rock River underneath the County Highway F/M bridge between Monday and Wednesday. The materials were deposited at a quarry owned by Rock Road Companies, of Janesville. 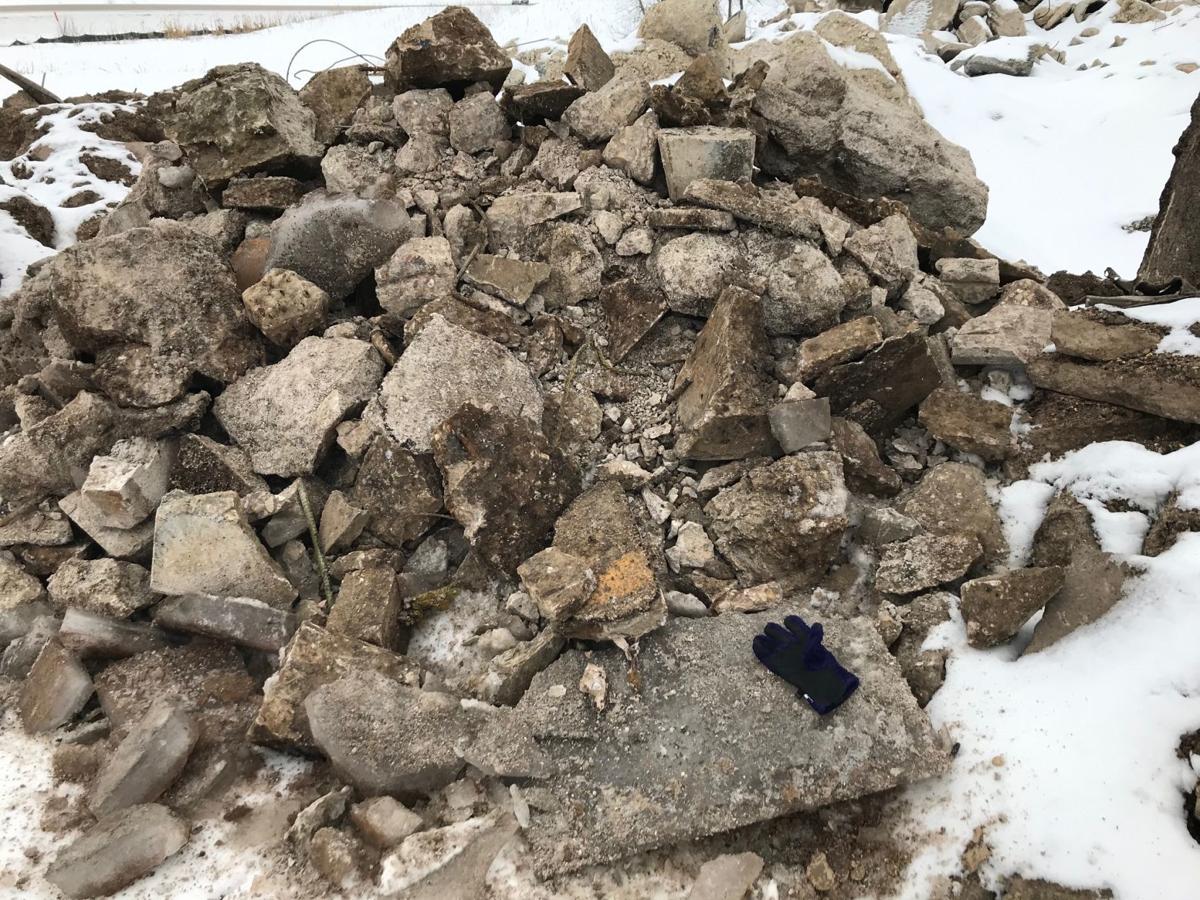 A closer look at some of the debris removed recently from the Rock River in Indianford. DOT and DNR officials said, in total, about 7 cubic yards or half a dump truck load of concrete construction material was removed from underneath the County Trunk M/F bridge.

Lunda Construction crew workers survey the debris which was removed from the Rock River underneath the County Highway F/M bridge between Monday and Wednesday. The materials were deposited at a quarry owned by Rock Road Companies, of Janesville.

A closer look at some of the debris removed recently from the Rock River in Indianford. DOT and DNR officials said, in total, about 7 cubic yards or half a dump truck load of concrete construction material was removed from underneath the County Trunk M/F bridge.

The bridge closed Monday, Jan. 27, to allow workers from Lunda Construction of Black River Falls to remove construction debris from the Rock River bottom underneath the bridge. The process used a crane on the bridge deck, necessitating bridge closure, Johnson said.

Cleanup was completed faster than anticipated, as the water was clearer than it had been during surveys performed last October by the DOT and the state Department of Natural Resources (DNR), he said.

Construction debris initially was reported by area residents, several of whom said they had witnessed it falling into the river in 2018 while a bridge deck reconstruction project was underway. The full project, including maintenance and repairs made to the bridge’s underwater structures, was completed last year.

Rock-Koshkonong Lake District (RKLD) commissioners hired a three-man dive team to help with Indianford Dam maintenance last August, and asked the team to look underneath the bridge for debris.

The team, of GOE International, with Midwest headquarters in Davenport, Iowa, submitted a report to RKLD in September. It noted that “concrete rubble with embedded rebar, ranging in density from approximately 50-percent (riverbed) coverage at the west bank to 100 percent at the east bank.” The report described “a concrete slab measuring 4-by-3-feet with protruding rebar,” and steel debris about 10-feet long, among other findings.

After viewing videorecordings provided by a three-man dive team from Northern Diving LLC, Kenosha, which was hired by Lunda to help with the cleanup effort, there was less construction debris in the water than he had expected based on prior reports. Johnson said.

“We thought we would find a lot more. That’s good for the contractor because it shows that he didn’t abuse the (bridge reconstruction project debris) specifications as much as was reported earlier,” Johnson said.

After concrete pieces were pulled from the river, they were broken apart and separated from any metal pieces, such as rebar, for recycling, he said.

A large metal piece, which he described as side rail removed in 2018 during deck top reconstruction work, also was retrieved.

“There is still a lot of debris under the bridge. A lot of it is natural rock that the river deposited,” Johnson said, adding that with high flows come water currents that move the material down river.

“We suspect that this material and the low visibility (in August) contributed to the previous divers’ report,” Johnson said, addressing the differences in the amount of debris discovered.

DNR environmental analysis specialist Shelley Warwick said she was onsite and watched the video from the divers’ van in real time for several hours on Tuesday and Wednesday.

“It was a good amount of debris and they (Lunda and divers) pulled out some big pieces; they were very thorough. I was very satisfied with what was brought out and the final scan showed native rock in the riverbed. Some were large boulders from upstream,” Warwick said.

Other non-construction debris could be seen on the video, she said, including tires, remnants of a raft, and some trees. The video also showed rock riprap around abutments, which, she said, is meant to be there.

Construction debris and natural rock can be distinguished by shape and color, and construction material has jagged edges not typically seen with natural material, she said.

The bridge tends to collect material coming downriver because of its close proximity to the dam, Warwick said.

“Under the bridge, the velocity shifts because of the dam. The dam holds back water and sediment, so more materials gather there than if there was no dam,” she said.

Materials were taken to a quarry owned by Rock Road Companies in Janesville for recycling, she added.

Rock Road was the contractor hired by DOT to perform reconstruction work on the bridge. Lunda was subcontracted by Rock Road, DOT officials have said.

RKLD Chairman Alan Sweeney said he was pleased by the work.

“The stuff remaining had no rebar so it’s a good chance that it was natural rock. I’m satisfied they did their due diligence,” he said.