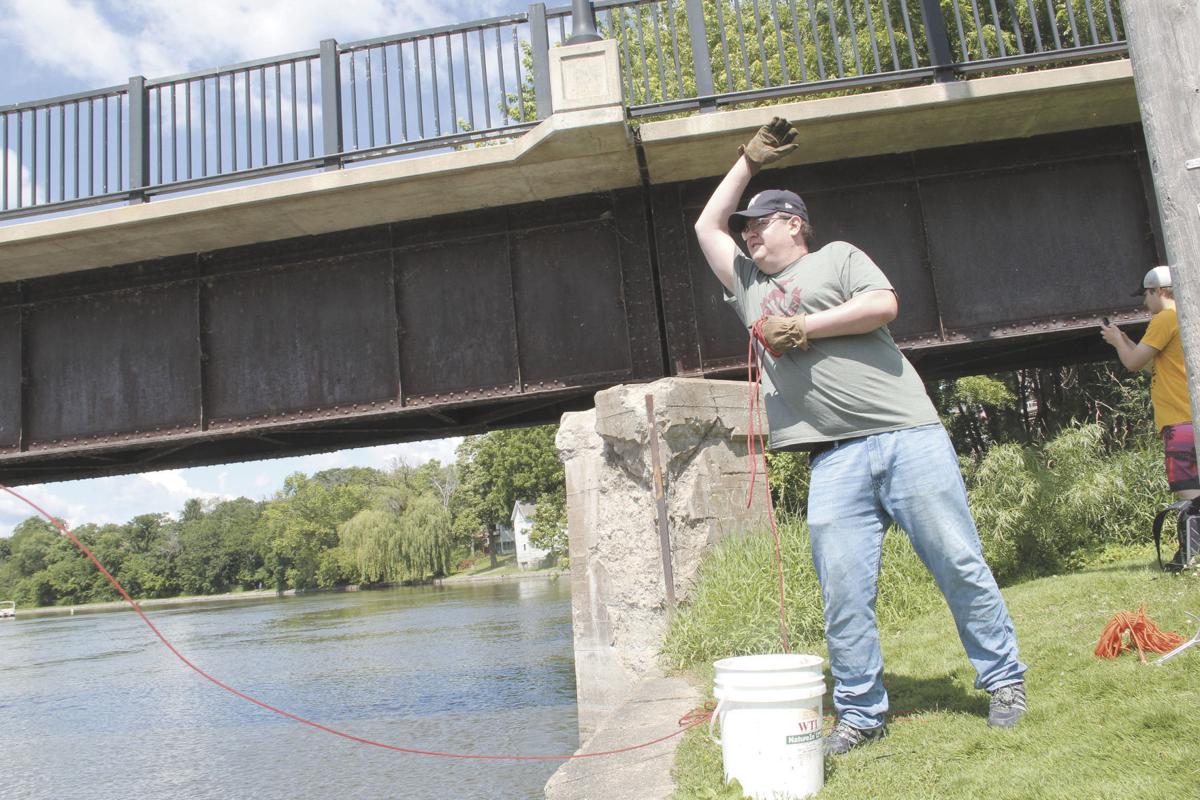 Troy Hartman had a fight on his hands with magnet fishing last week along the Rock River in downtown Fort Atkinson. 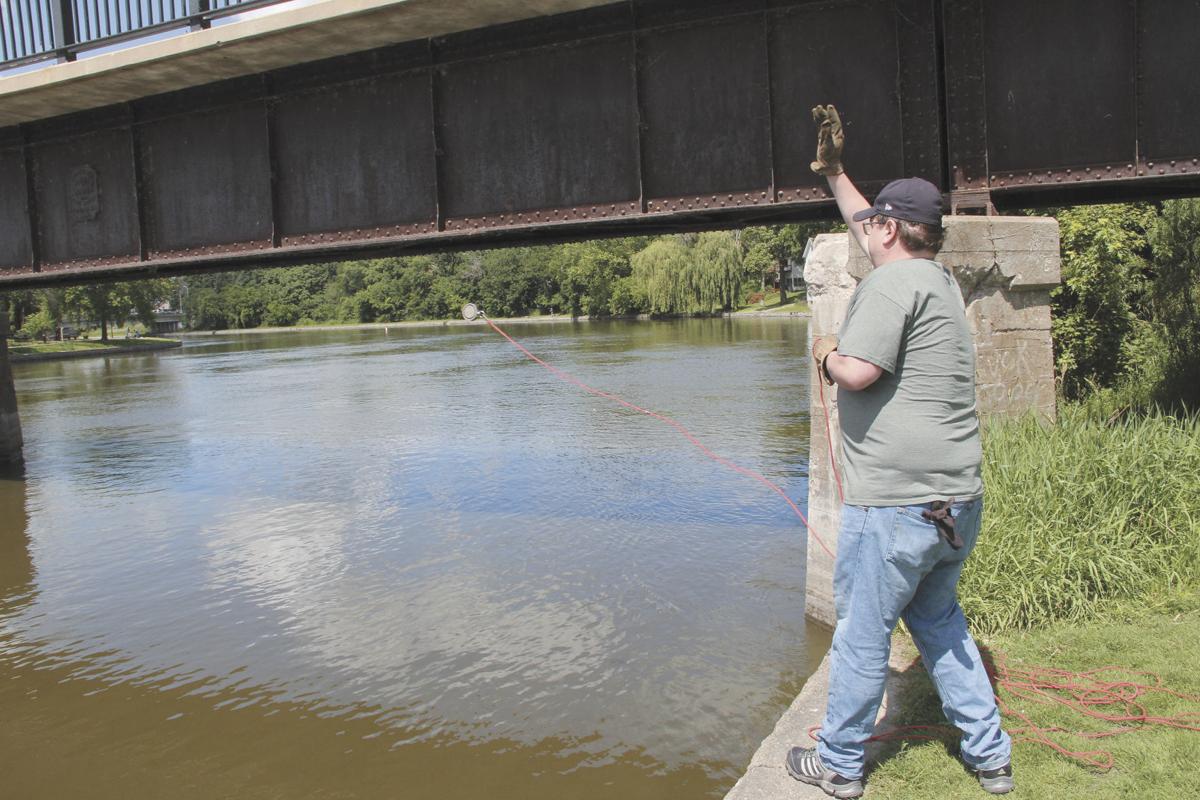 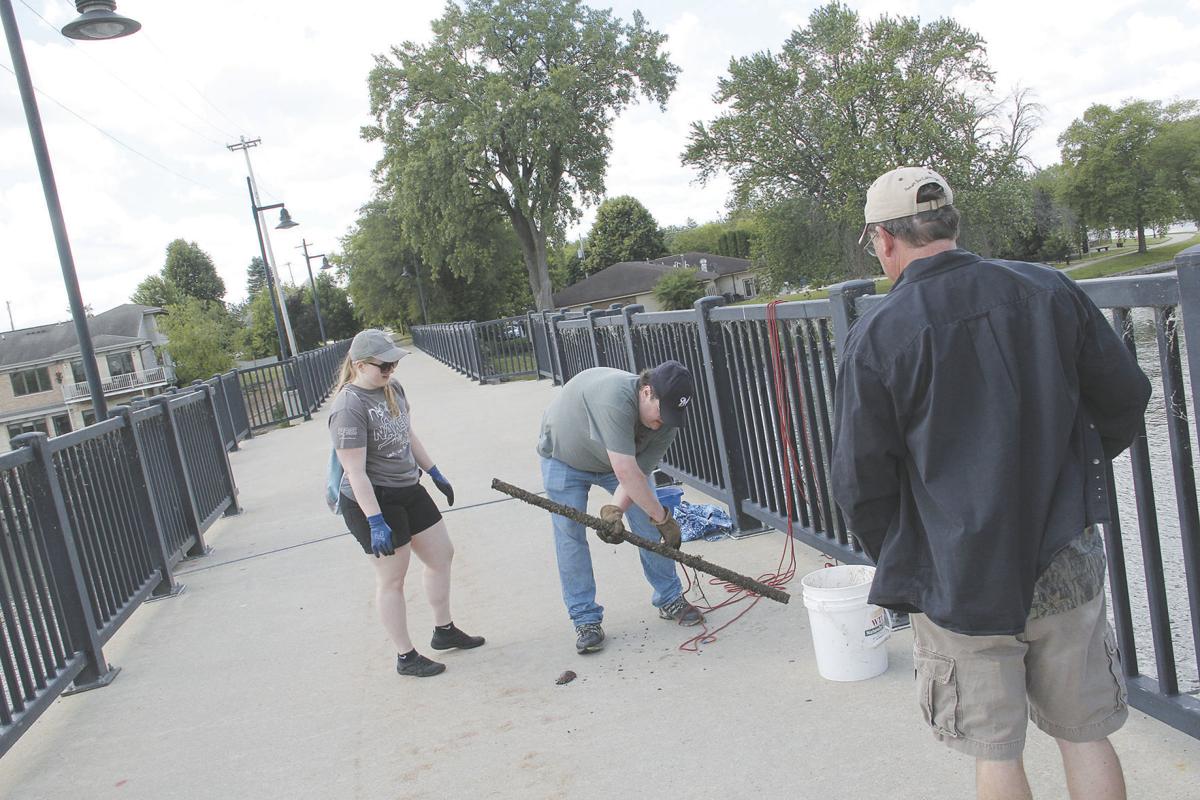 Troy Hartman and Stacy Miller look at the catch they pulled from the Rock River on Tuesday, June 23. Many people stopped by to see what they were catching throughout the day. The magnet fishers caught a giant metal pole. 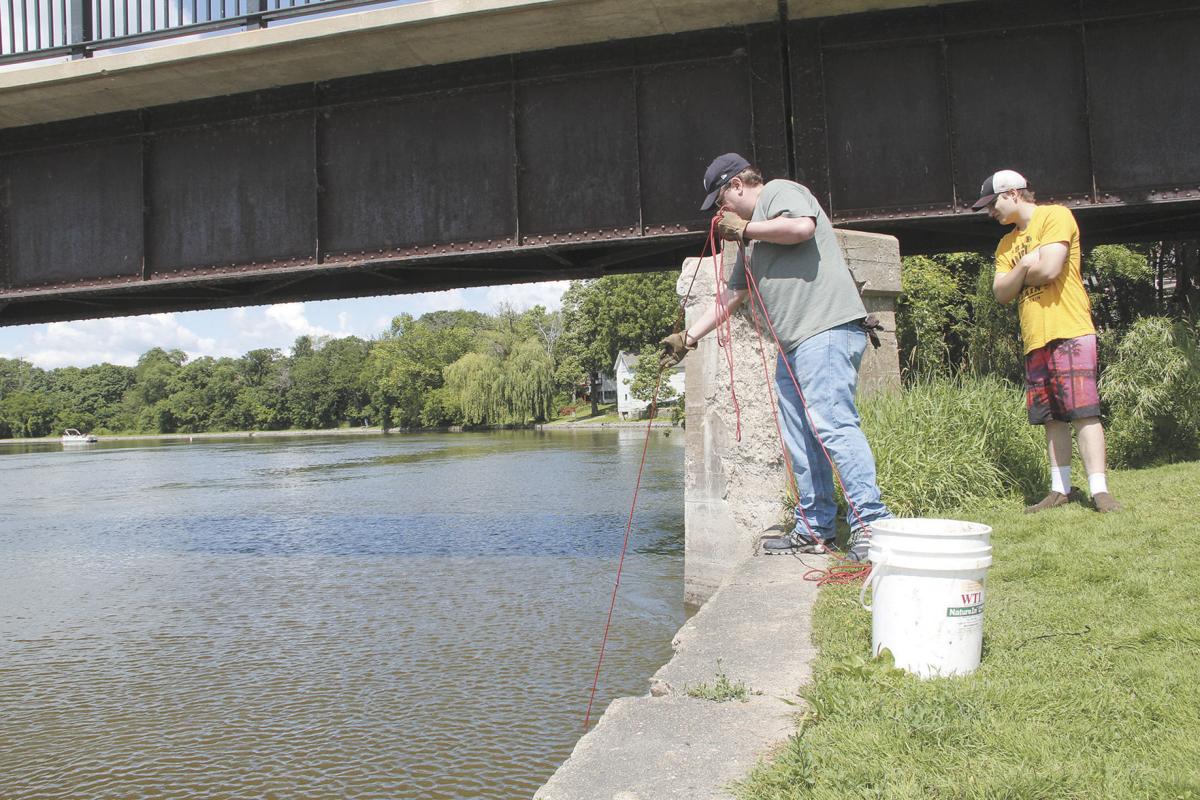 Above, Troy Hartman, left, and Cody Nitardy, look at the first catch of the day along the Rock River in Fort Atkinson on June 23. At left, also in the find during the past few weeks have been a shopping cart, railroad spikes and more bike parts. 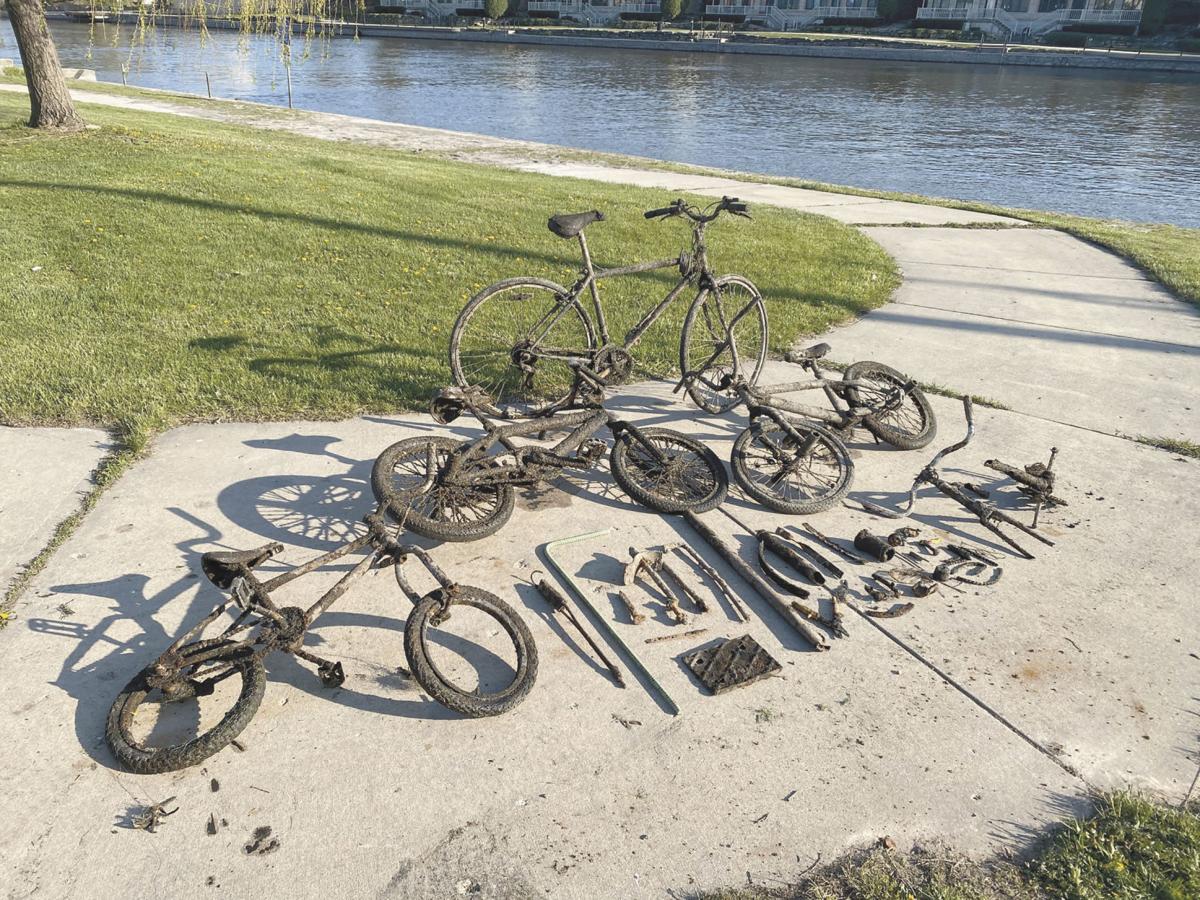 Troy Hartman’s catch after a good day of magnet fishing on the Rock River. 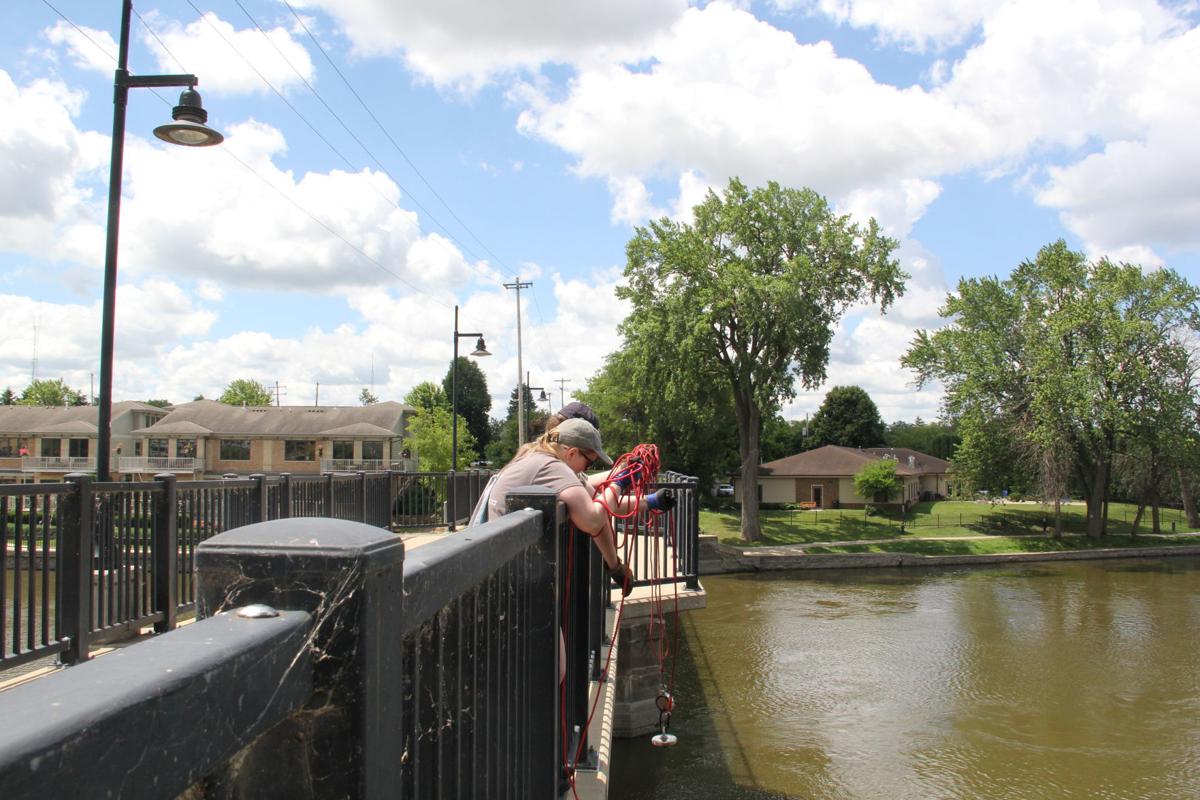 Stacy Miller and Troy Hartman work to get their lures untangled last week along the Rock River in downtown Fort Atkinson. 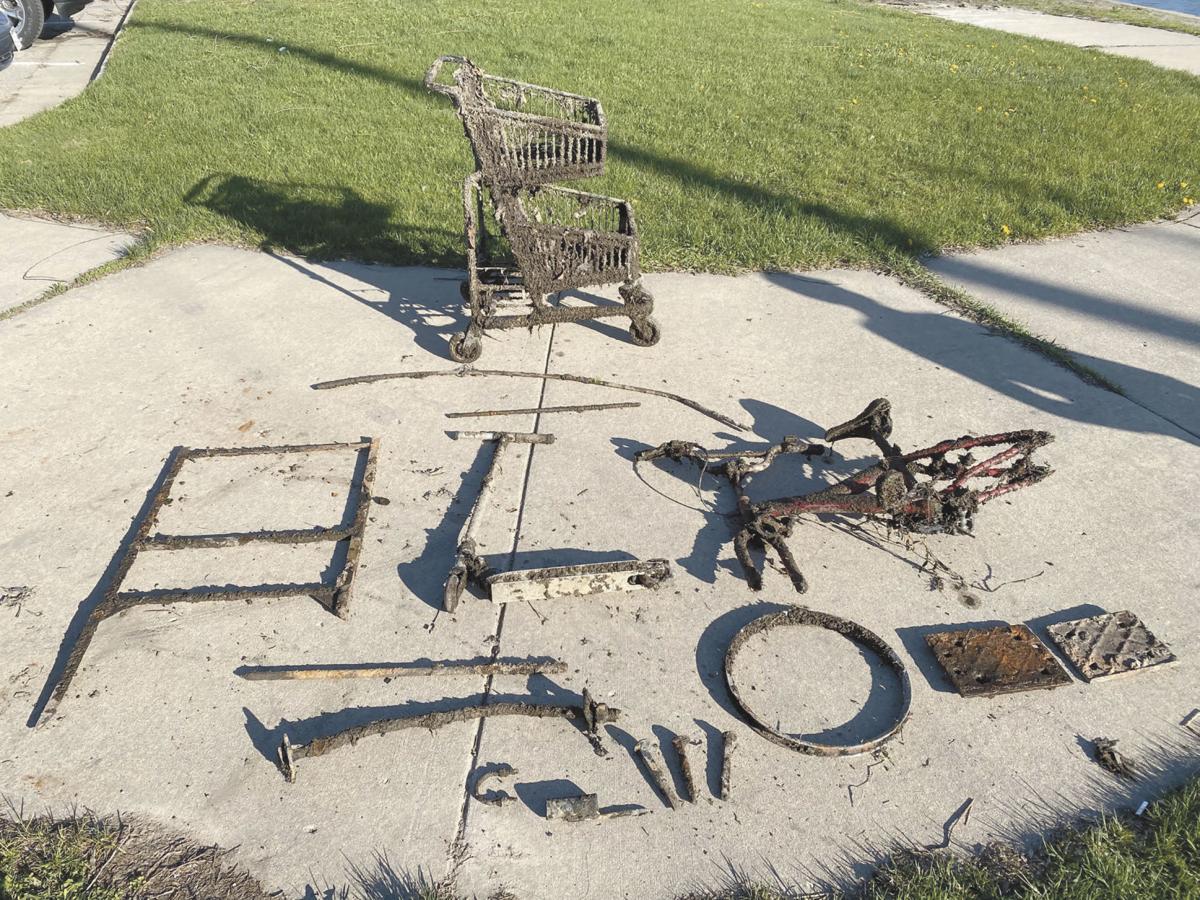 Also in the find in the last few weeks has been more a shopping cart and more bike parts.

Troy Hartman had a fight on his hands with magnet fishing last week along the Rock River in downtown Fort Atkinson.

Troy Hartman and Stacy Miller look at the catch they pulled from the Rock River on Tuesday, June 23. Many people stopped by to see what they were catching throughout the day. The magnet fishers caught a giant metal pole.

Above, Troy Hartman, left, and Cody Nitardy, look at the first catch of the day along the Rock River in Fort Atkinson on June 23. At left, also in the find during the past few weeks have been a shopping cart, railroad spikes and more bike parts.

Troy Hartman’s catch after a good day of magnet fishing on the Rock River.

Stacy Miller and Troy Hartman work to get their lures untangled last week along the Rock River in downtown Fort Atkinson.

Also in the find in the last few weeks has been more a shopping cart and more bike parts.

Standing on the bridge with a line in the water, Troy Hartman had a fight on his hands.

There was something on the other end that had some weight to it.

Slack suddenly hits the line and the catch is gone.

“Now I know something is there,” he said. “I’m going to cast out past it and drag.”

Within seconds, Hartman has a bite again, this time pulling the heavy catch onto the bridge to the delight of those watching.

“Cleaning the river one pipe at a time,” he said.

This catch wouldn’t be something that most anglers would be proud of, but this fishing is a little different.

This is about curiosity.

Magnet fishing is catching on in Wisconsin, so much so that on this day, there were as many anglers fishing for metal objects than there were fishing for fish.

A few hours before work on a Tuesday morning, Hartman decided to get in some fishing on the Rock River in downtown Fort Atkinson. He was joined by others in his magnet fishing Facebook group who couldn’t let a nice day go by without being on the water.

Having been doing this for a few months, Hartman has stepped up his game with a more expensive bait — rather, magnet — that weighs three pounds and is double-sided.

On his best day, Hartman has pulled out several bikes, railroad spikes and even long pipes.

How any of these metal objects got there is anyone’s guess.

But the benefit to magnet fishing is helping clean up the waters to the delight of anglers looking to create a clean home for fish.

“You’re not going to get a lot of valuable stuff,” Hartman said.

Much of what magnet fishers catch would be considered junk to most folks, but for these metal scavengers, fishing really is not that different than trying to catch the big one that got away. There’s still the story of what they snagged, and how it was too heavy to pull in. But some day, they all believe, there is something valuable they will find.

Cody Nitardy, who was fishing near the Glacial River Trail bridge, shouted out what he was hoping to catch.

Luring in a big one

When Hartman dropped his line in along the banks of the river, he slowly pulled in his first catch of the day.

“Yeah, I got his lure,” he said, having snagged a fishing pole line from a neighboring angler.

“First find of the day.”

Hartman was unsure whether the lure was attached to the pole next to him, or not. But that’s what’s fun about this fishing. There always are things to catch, and you never throw anything back.

Items that he catches often are discarded in a nearby dumpster, and some items like bicycles might be set aside for people to see and reclaim. But for the most part, the items are the catch — with pictures taken and posted to others in the Facebook group.

Getting into the hobby for Hartman came from watching a video a few months ago.

“He had a high-powered magnet and pulled out a couple of scooters,” he said of the guy in the video. “And that would be really fun to do in the Rock River. I went on Amazon and looked to see what they had. They had a whole section for magnet fishing stuff. I bought one.”

There are all different sizes and prices for the magnets, and the hobby can get a little expensive if you cast out and lose your prized lure.

Hartman said he basically taught himself how to magnet fish, and the techniques to catch something take a lot of skill.

Nitardy was only in his first few days of fishing with a magnet and had plenty of questions.

“I started by dropping off a bridge. I didn’t get much. I think I got a butterknife to start,” he said. “I realized there was a technique to it. This is a lot like fishing. You gotta jig a little bit.”

The rare-earth magnets are very powerful, Hartman said, and can lift 1,700 pounds.

But items are often stuck in the muck and are difficult to set free. There also are plenty of rocks to get on which to get caught.

But when things work well, there is a fight to pull in a large find.

“When you hit something metal, you feel it lift up. You definitely feel you have something,” Hartman said.

When he started the Jefferson County Magnet Fishing group on Facebook, it didn’t take long to get 15 people to join. On this Tuesday, he had two members stop down to the river.

Stacy Miller brought her single-sided magnet and cast off the bridge area alongside Hartman.

“Sometimes that happens. You catch your friends,” she said, trying not to tangle the lines.

The two were attempting to work together to retrieve an item, knowing that if either magnet got too close to the metal former railroad trestle-turned-pedestrian-bridge, they would lose that valuable lure.

Miller noted that she learned how to tie the line to yourself from her fiancé. That way when you cast, you don’t lose the magnet.

Hartman said the local group would like to plan a boat outing.

“Probably one of the only draws to magnet fishing is you’re not going to find anything really valuable,” he said. “I do it for the mystery of the item. See what kind of history I can pull out.”

A young angler strolled over to the group and asked them what they were fishing for.

At the same time, there was a big splash in the water. No doubt a fish was making some noise.

“I don’t think I will be able to catch it. Unless it’s a steelhead,” Hartman said with a smile.

Hartman occasionally has fished for real, but he is not someone who is into that sport.

“I don’t have the patience for that,” he said. “Kind of ironic.”

But when this group is together, there are plenty of fish stories.

They never involve a giant northern or a feisty tuna pulled from the ocean.

“A friend of mine’s girlfriend pulled something heavy to shore,” Hartman told the group. “Got to the edge of the water and it was a giant grill.”

“We couldn’t get it out of the water. It slipped the line. We needed a grappling hook,” he said.

Nitardy pulled a few items from his catches from his pocket, showing a piece of what looked like a cap on an outboard motor and a picture of a giant metal rod taller that he was.

“People do find guns. Cannonballs,” Hartman said. “I saw a person pull up a fistful of coins. And a friend in Watertown pulled up some steel pennies from World War II.”

When he started the Facebook group, Hartman received tons of comments on the picture he posted of what he found. Soon, friends were joining him in the hunt.

“I was able to convince friends to come out with me. They had a blast and bought their own,” he said of the magnets.

The group tries to go out at least every other week, Hartman said. And they always are looking online at other magnet fishers’ catches. Hartman said he even heard that one person found a musket while the walkway bridge was being constructed in Jefferson. And he wonders whether that is something that a magnet fisher also could find.

The reason Hartman fishes near bridges, he said, is that’s where people tend to throw things into the water.

In addition to catching something, the special fascination of this sport is trying to figure out what it is. They use the internet to see if they have something valuable.

But to magnet fishers, there is no junk to be found, only stories.

“We are finding a lot of cool stuff. We are cleaning up the water. A lot of fishers have stopped us and thanked us,” Hartman said. “They get lures caught (on this stuff).

“My best outing, we found five bikes in one day. And a shopping cart from Festival.”

Hartman said it takes time to learn how to catch something, as well as the difference between being stuck and being on a big catch.

“There are a lot more magnet fishers out. And that’s a good thing. They stir things up,” he said.

Hartman said he believes there are more than 100 bicycles in this area of the river, dumped there after being stolen. But there is one he still is waiting to find: the one taken from his when he was a child.

In the meantime, he is happy to continue the search for whatever he finds.

“I was so happy when I got my first Razor scooter,” he said. “This is the dream.”