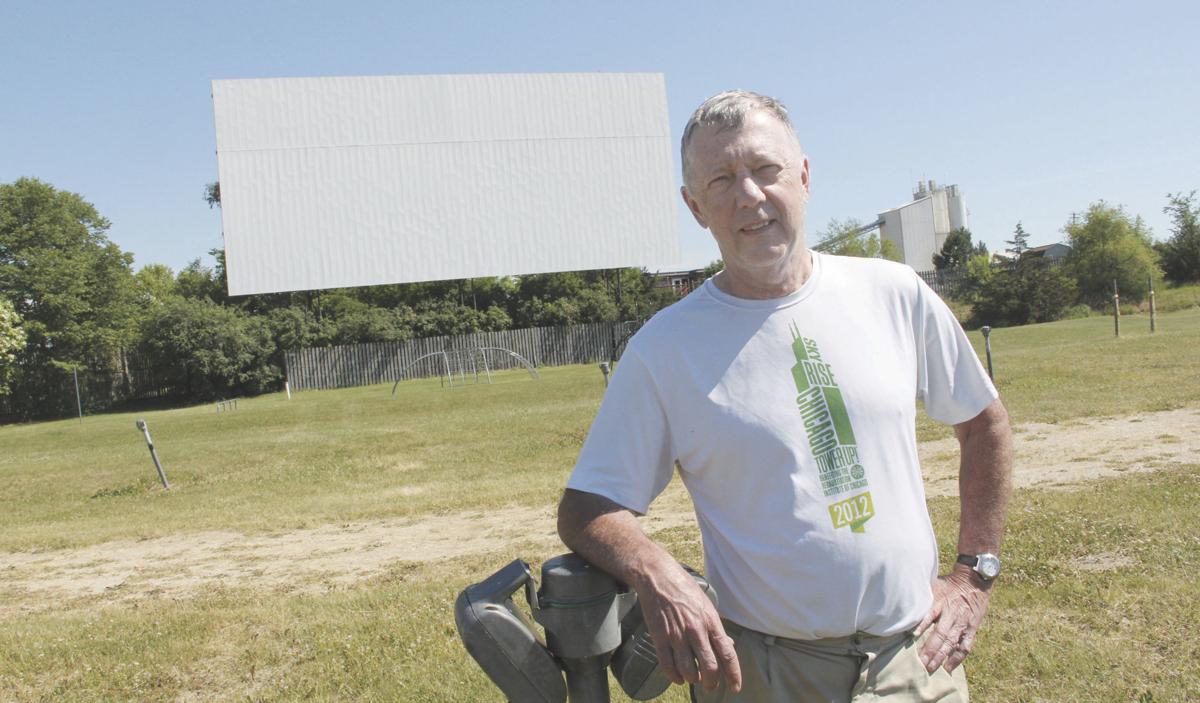 John Burgess takes a break from getting the lawn ready at his Highway 18 Outdoor Theatre Friday. He is showing classic movies until studios release new ones. 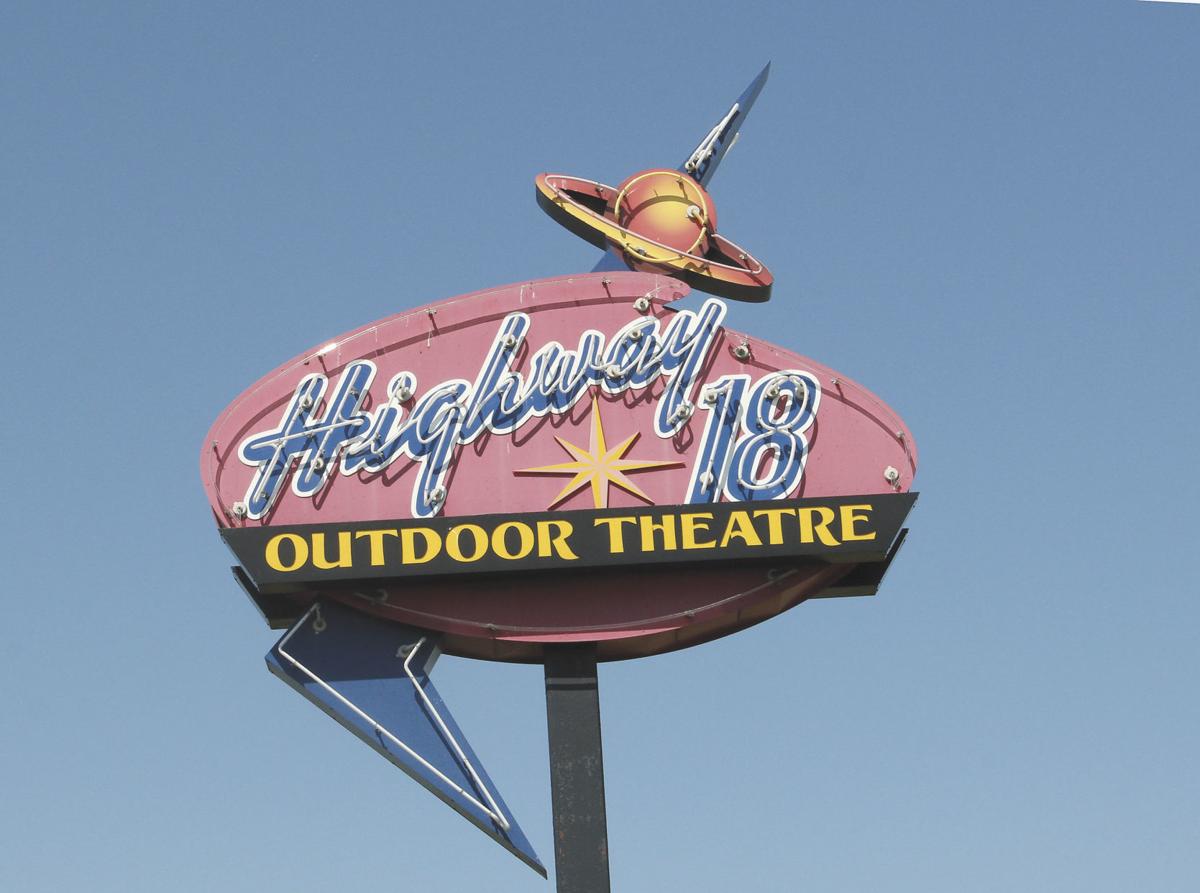 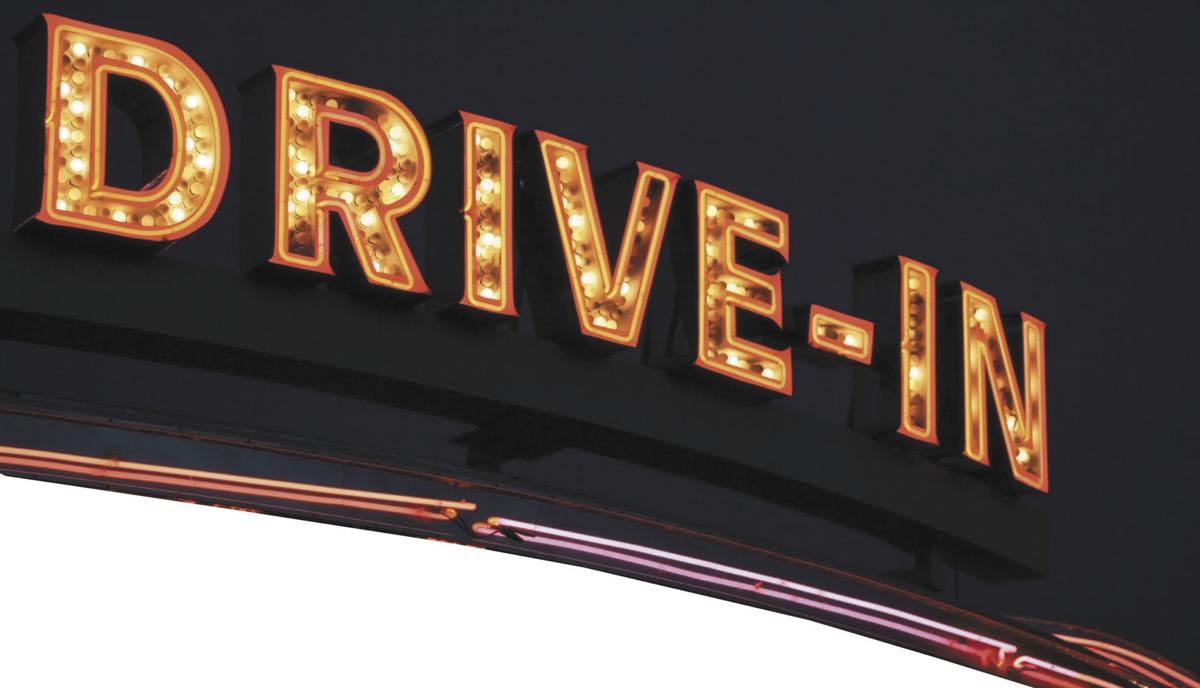 John Burgess takes a break from getting the lawn ready at his Highway 18 Outdoor Theatre Friday. He is showing classic movies until studios release new ones.

John Travolta was still a few hours away from making an appearance as Lee Burgess tended to some last-minute preparations.

“We’ll probably be here until about 2 a.m.,” he said, looking at the lawn he had yet to mow.

From Tom Cruise to Scarlet Johannson, a lot of famous people have been the main attraction here — and last Friday night was to be no exception.

This was a big weekend for Burgess, whose business has been shut down for the early part of the summer due to the coronavirus pandemic.

And he was about to do something he hadn’t done before.

In a few short hours, fans started lining up for an evening with the stars, social distancing in their cars to view “the one that I want ... doo, doo, doo.”

At dusk, Burgess fired up the projector as “Grease” hit the giant metal screen at the Highway 18 Outdoor Theatre.

“Starting off with triple features,” he said. “I’m seeing if that can draw in people.”

For those who don’t know, drive-in theaters like Highway 18 just west of Jefferson are popular again. They offer a retro feel for movie lovers who have never been to one — and a chance to have some entertainment as indoor theaters continue to be shuttered.

“Our first weekend open went very well, I thought. We had to put some precautions in place. Had to space cars ever other stall,” Burgess said this week. “Was pretty much like a normal weekend. Everybody was really nice. Social-distanced and followed the rules.”

The Highway 18 drive-in is the largest outdoor theater in the state, able to pack in 540 vehicles. But Burgess noted they didn’t come close to half those sales in their first weekend.

The problem is not people wanting to go to the movies anymore. It’s that the movies are not coming to theaters.

First-run blockbusters have been pushed back to later in the year.

So, with a retro way to watch movies, Burgess has turned to retro films to keep the flicker on the big screen going.

And last weekend, Travolta packed them in.

As fans await feature films, the story of how Burgess came to own one theater in Wisconsin could be its own movie. One where you sit back with some popcorn and grab a soda.

He never wanted to be a movie star on the big screen, or a critic watching the latest offerings from Hollywood.

In fact, Burgess is far from a movie fanatic.

“I like watching movies, but not more than anybody else,” he said.

The appeal is the business. And movies are something he has been around since he was a teenager.

Growing up near Detroit, the movie business was something Burgess stumbled upon while trying to take music lessons.

His teacher worked in the projection room at a local theater.

“I used to arrange my music lessons in the projection booth, so I could watch the movie for free,” Burgess said. “I learned to run projectors.”

All through high school, he worked in a local theater and learned the business. And living along 8 Mile Road, he also was not far from theaters.

“I was never more than 10 minutes from a drive-in,” he said.

Having had a successful business career in Illinois and also in the Navy, Burgess was not part of the movie business. That opportunity came in the late ‘90s when he heard that a drive-in theater near Jefferson was in trouble.

“I had an interest in the movie theater business and I bought this out of bankruptcy,” he recalled.

It was a labor of love, he thought. But when he saw the condition of the theater, Burgess realized this was far more than a summer hobby.

“It was in terrible shape,” Burgess said. “I have the building structure, but the most important part is the metal screen. That’s $150,000. The building was intact; the plumbing was shot. I had to rewire the field and put in new poles.”

Burgess knew how to run the old film projector, but by 2011, he installed digital protectors — two of them in case something was to break during a showing.

He was the first drive-in in Wisconsin to go digital, bringing an old way to watch movies into the digital age.

Burgess often hires high-school students to run the concession stand starting out. And if they return each summer, they can learn the business.

“By the time they get to college, they are good, and they can run the theater,” he said.

Can a super hero save the day?

Picking up a hard drive and glancing at the movie list on the small device, Burgess went over the films he has coming in the next few weeks.

There’s “Chicken Run” and even the classic “Back to the Future,” where Marty and Doc’s time machine could be handy right about now.

This summer has hit businesses hard, but perhaps none worse than the movie theater industry.

For theaters, not even Wonder Woman can save this summer.

Last year was one of his best years in the movie theater business, Burgess said, the blockbusters such a hit that he kept most movies for two weeks.

The Minions proved to pack a punch for families wanting to go to the drive-in.

But this year, there is nothing to be found. Releases like “Maverick,” the Tom Cruise sequel to the 1980s smash hit “Top Gun,” was supposed to come out in June. But that has been pushed to November.

“The industry is very chaotic,” Burgess said. “Mainly there are no first-run movies.”

With indoor theaters shut down, movies are now being released on streaming services. But the blockbusters that are the bread and butter of the industry are on hold.

While drive-ins are hot right now, with pop-up ones selling out at places like Warner Park in Madison, the actual theater business is having to get creative. Burgess said he knows that drive-ins are only 1 percent of the business. And movie companies are balking at letting first-run movies go to them.

“Studios are not releasing movies for only drive-in markets,” he said. “The studios are pulling all first-run movies off.”

AMC, which owns almost 500 movie theaters across the nation and dominates the screen count, has had a tough go.

“AMC, when they have no revenue, that threw them to the verge of bankruptcy,” Burgess said. “There is a lot of financial chaos in the indoor screen business.”

Finding a new film to show is so difficult that even one that drive-in theaters thought they would get was pulled at the last second and sent to a streaming service. “The King of Staten Island,” a film starring SNL’s Pete Davidson, was supposed to be the first for drive-ins this summer.

Burgess said he thought things still might be good when the new “Wonder Woman 1984” remained on the list.

“Then they pulled ‘Wonder Woman,’” he said. “I think this is going to be this a big change in the industry. Non-blockbusters will be sent more to streaming at the same time as theaters.”

And with Marvel movies being a big draw, there is no super hero coming to save the day.

But fear not: Paramount and Universal are making many of fan favorites available to theaters for now.

And if John Travolta can’t save summer, then who can?

People, Burgess said, still want to get out to the movies. But showing films that one can see on streaming is the challenge.

“We’ll see how long people (come out to theaters) for movies people can see free on TV,” Burgess said.

Burgess looked at the lawn he was trying to get spruced up before customers arrived, the giant screen loomed in the distance.

He only has one screen at his drive-in, and he only has owned one theater.

And that’s just the way he likes it.

“I only have the one theater, but these days I’m glad I only own the one,” he said.

While the Highway 18 Outdoor normally is open each night from April through Labor Day, Burgess has opened the theater only on Fridays through Sundays this year.

“This summer might be weekends only. I will run as long as crowds justify (being open longer),” he said.

Right now, Burgess has titles booked through July, and then he will take a look at how things are.

One thing that could be in his favor is that indoor movie theaters are opening up again.

AMC announced last week that it is reopening 450 theaters in the United States on July 15. The company, founded in Kansas City, Mo., is celebrating 100 years.

“We will be showing new releases, as well as classic movies that are widely known and loved,” said AMC CEO Adam Aron.

Disney’s “Mulan” and Christopher Nolan’s “Tenent” are two new releases AMC will have, he said.

That means for drive-in theaters, new releases are on the way.

In his first week open, Burgess required social distancing and people to stay in their vehicles, except for going to the concession stand or restroom. But those rules are being relaxed and people now can sit outside of their vehicles.

The pandemic, he said, has brought attention back to drive-in theaters, an industry where there are not many left. Burgess, a member of the United Drive-in Theatre Association, said there are only 317 left in the United States.

“I think there has been renewed interest over the years,” Burgess said. “That’s why you see a lot of these pop-up drive-ins. People want to come out to see movies they want to see, and people like to do retro stuff.”

And a drive-in is a good way to social-distance.

One of the main criteria for running the drive-in this summer was the ability to have the concession stand open. Burgess knows that is where movie theaters have to make their money.

While the first weekend, Burgess did not have burgers or chicken yet, everything else was ready to go. The soda machines were filled, and the popcorn was ready for warm butter.

And firing up that machine again felt good.