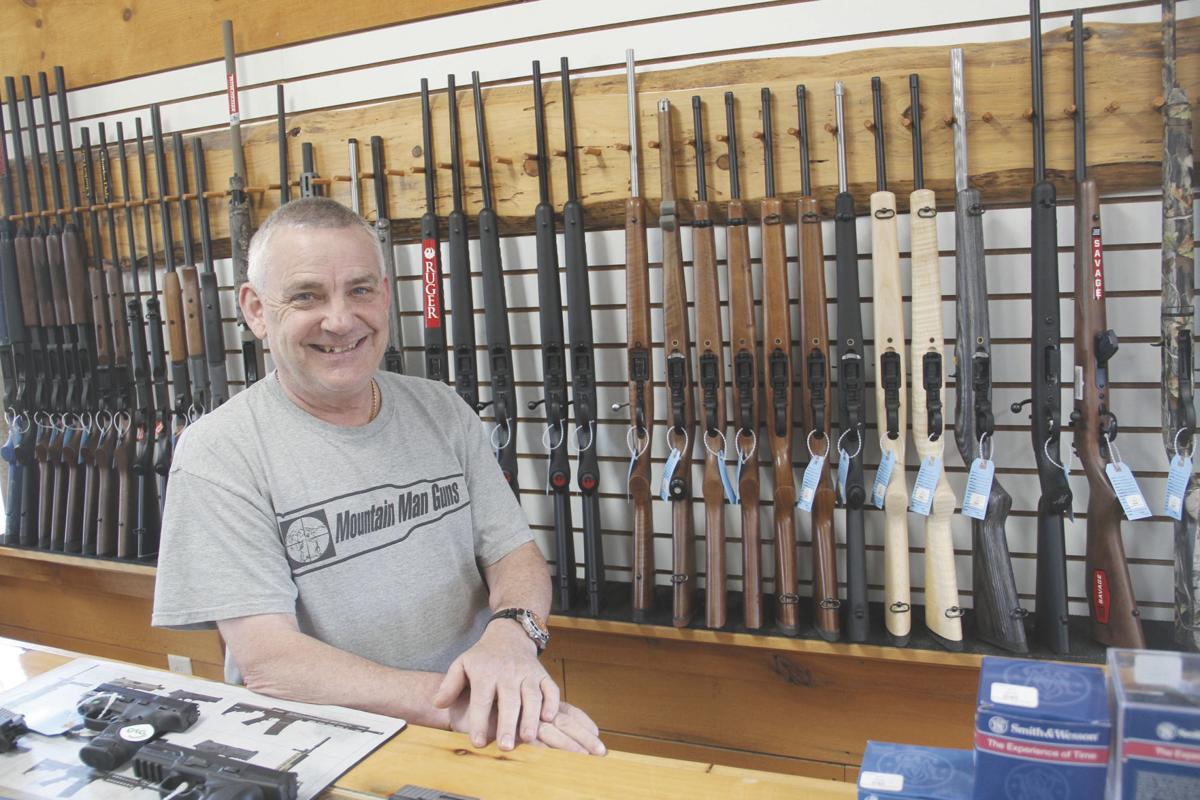 Dan Yaeger stands in his gun shop Mountain Man Guns near Cambridge on Monday. Sales of guns and ammo have surged so much that many items are now hard to come by. 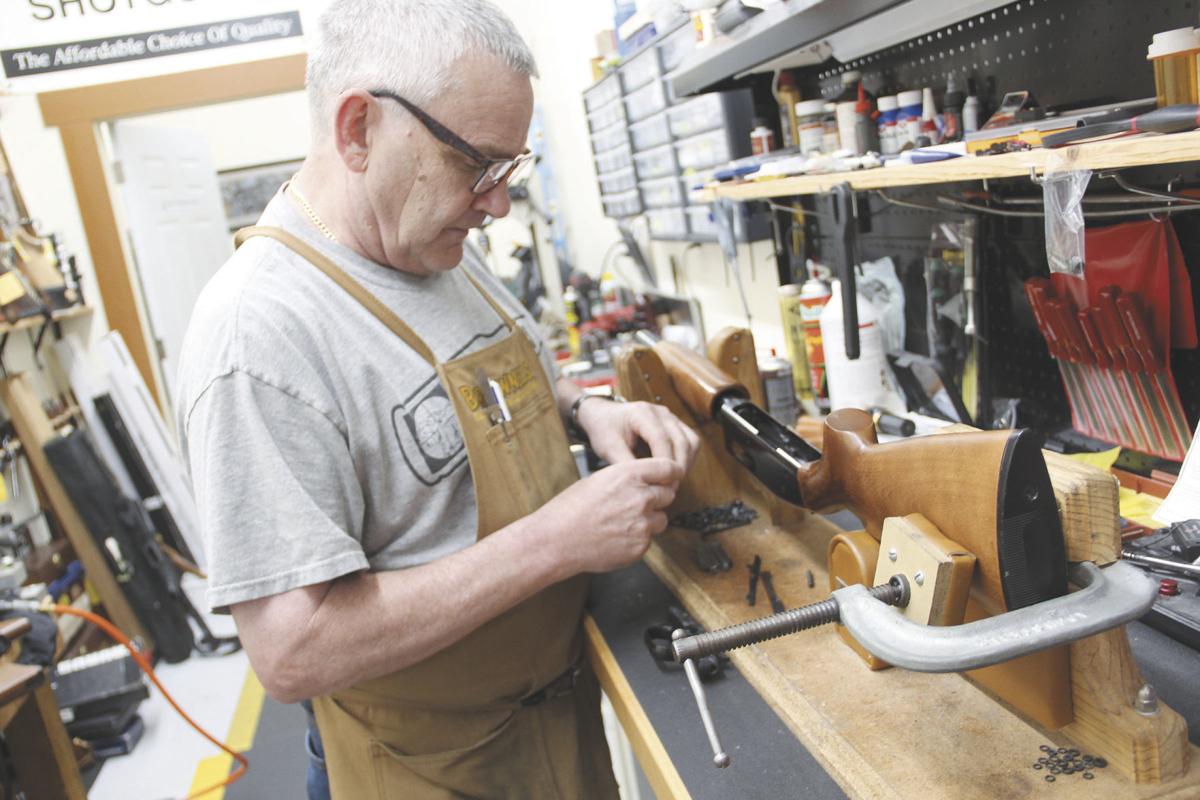 Dan Yaeger works on a gun in his shop Mountain Man Guns near Cambridge on Monday.

Dan Yaeger stands in his gun shop Mountain Man Guns near Cambridge on Monday. Sales of guns and ammo have surged so much that many items are now hard to come by.

Dan Yaeger works on a gun in his shop Mountain Man Guns near Cambridge on Monday.

Dan Yaeger walked past empty cases in his gun shop Monday with a look of amazement.

“It’s been unbelievable,” he said, glancing around his store, Mountain Man Guns, on his day off. “Kind of like the toilet paper thing. Buy it all.”

Shelves along the wall, where stacks of ammunition had been stored, now hold only a few scattered boxes. And cases that usually display a wide variety of handguns have only a few left.

When he got into the business about 40 years ago in Fort Atkinson, Yaeger recalled, he looked at this as a passion. But when he retired from a factory job, he opened up Mountain Man Guns near Cambridge in 2013.

He never expected to be working seven days a week trying to catch up. From gun repair to sales, customers have not stopped calling or showing up.

“It’s more than a full-time hobby. But I enjoy it,” he said of the store.

People have been driving hours to find ammunition for handguns and shotguns, only to face empty shelves at chainstores like Cabela’s and even smaller shops like Mountain Man Guns.

When the COVID-19 pandemic hit in March, there was a rush on buying guns and ammunition in America, in record numbers the likes of which had never been seen before. Three months latdr when states started to reopen again, gun shop owners like Yaeger witnessed another surge.

Monday marked three weeks since the death of George Floyd after a white Minneapolis police officer used his knee to pin Floyd to the ground. As protests broke out in Wisconsin and across the nation, another surge in gun sales took place.

Yaeger said it was normal to sell out of one item that might be popular at the time, but not almost everything except hunting rifles. From handguns to pump-action shotguns, the weapons supply has dwindled for stores like his, and there is no telling when things will get back to normal.

Ordering almost is impossible for many items, he said.

Throughout the nation, gun and ammunition sales have spiked the last three months, prompting more than 3 million background checks by the FBI for guns sold in May alone. And for the first half of this year alone, 15 million guns already have been sold nationwide ... more than the entire year of 2010.

“Even in my little world, we’ve sold 10 or 15 times what we sell in a day,” Yaeger said. “It’s pretty steady through COVID and there wasn’t much left to get.”

The people buying guns are not his regular customers. Rather, they are people who never have purchased a firearm before.

“I had a very busy weekend,” he said. “People are truly concerned. They are new-time gun buyers. These are not my hard-core gun buyers. People want to defend themselves.”

He has kept ordering inventory throughout the COVID-19 pandemic and still has a decent supply of items left, but Yaeger said he does not know when more shipments will arrive.

During the shutdown when stores like Cabela’s in Madison was filled with customers waiting in long lines to get guns and ammunition, many people not wishing to wait anymore drove to Mountain Man Guns.

Customers, often had the same message: “I would never come in here. I am so against guns, but I need to take care of my family,” Yaeger said.

He said the normal busy time of the year is not in summer when there are plenty of other things to do. But this year, most events have been cancelled.

Reno Garthwaite, who owns Thunder Shooting Supplies in Milton, said he checked with his distributor on Monday and received the same response that stores everywhere are getting.

“We just checked our distributors this morning and they don’t have anything,” he said. “Ammo and guns you just can’t get.

“I have not seen it like this before. Ever.”

Garthwaite said people have been driving two hours to his store to snap up what he has left. He said he placed an order before the coronavitus outbreak hit and he does have some ammunition left, but he is limiting everyone who comes in to one box. And when that’s out, there is no telling when new supplies will arrive.

Garthwaite said he has sold two-thirds of his guns in the shop.

But gun dealers are not the only ones who are seeing a huge spike in demand. Tom Bergey, who owns Bergey Jewelry and Archery in downtown Fort Atkinson, provides the paperwork part of the business with background checks and gun transfers.

“By far the busiest,” he said of the paperwork requests he has gotten from people buying guns in recent months. “Normally paperwork would go right through, but lately, they are so far behind. ‘Call back in a day or two.’”

Since this is an election year, there usually is another spike in gun sales coming near November, with people always concerned any change in leadership might lead to gun law reform. But with no word on when supply will meet demand, gun shop owners are not certain what the fall will look like for sales.

“With an election coming up, that always drives up more guns sales,” he said. “But there isn’t anything to be had.”