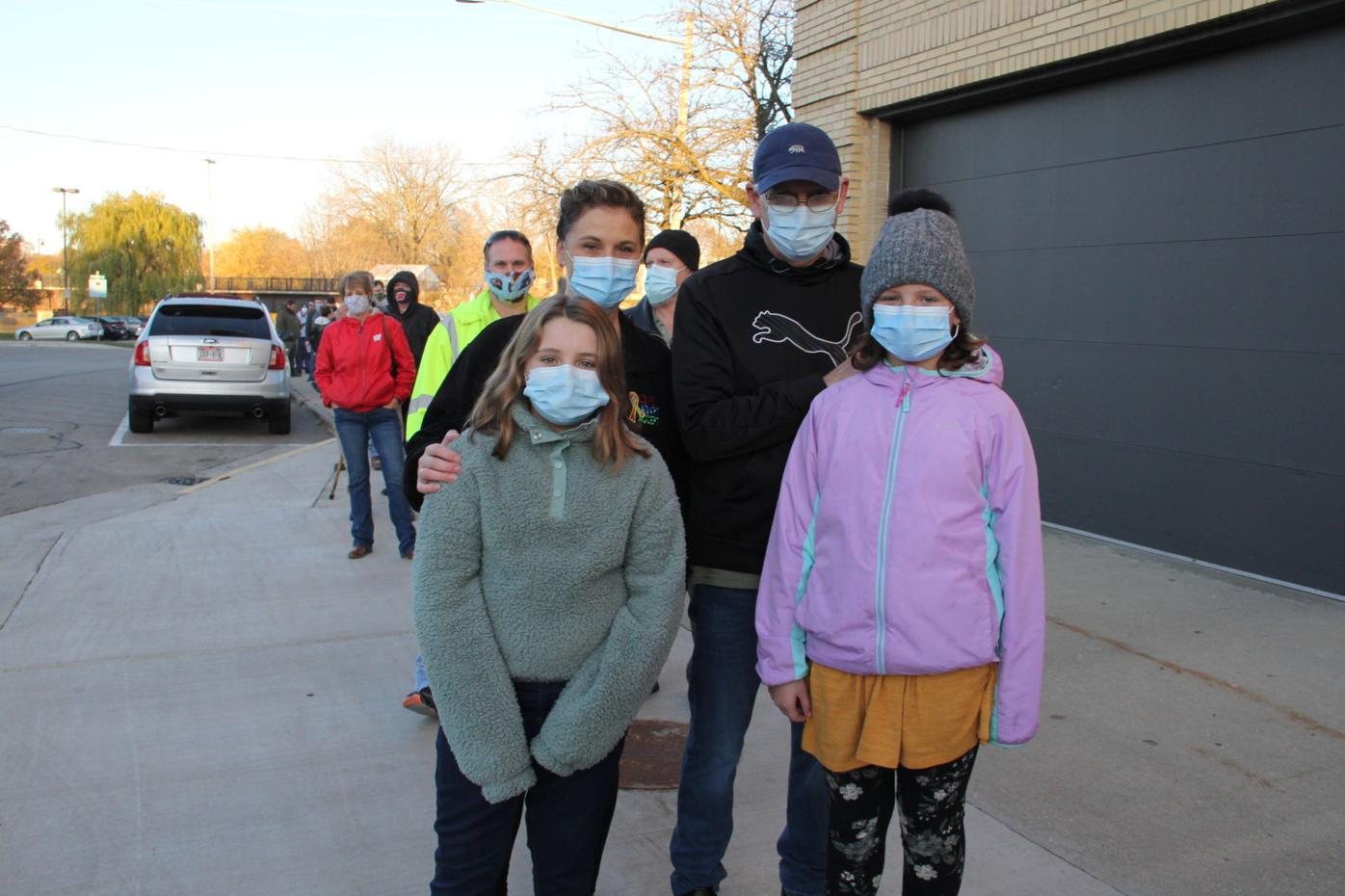 Above, Tom and Karen Ulrich and their daughters, Sophia and Josie, are among the more than 125 Fort Atkinson residents lined up when the polls opened at 7 a.m. Tuesday. 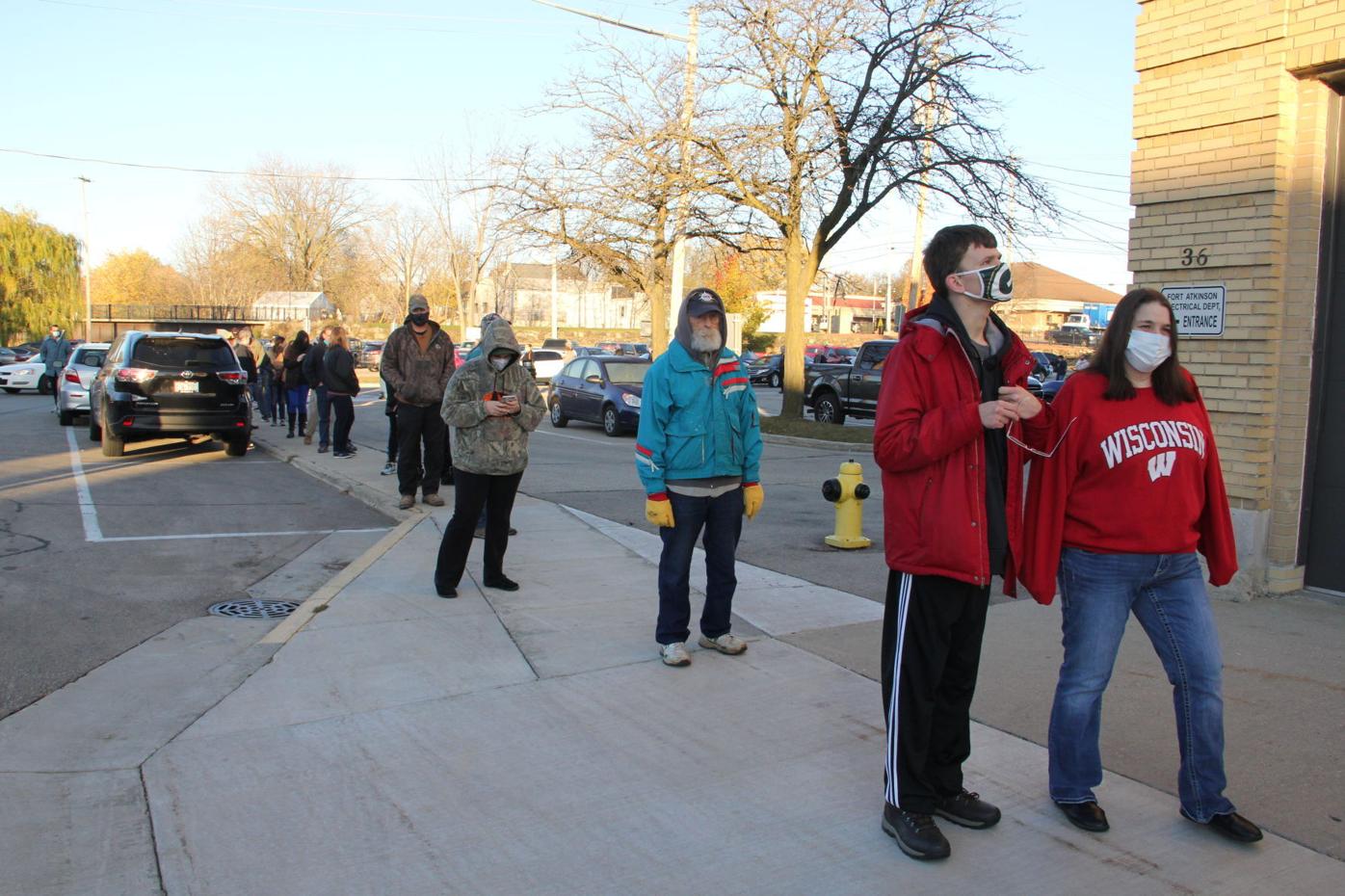 Fort Atkinson voters got up early to cast ballots in the president election Tuesday. Shown here is the line at the municipal building about 7:15 a.m. 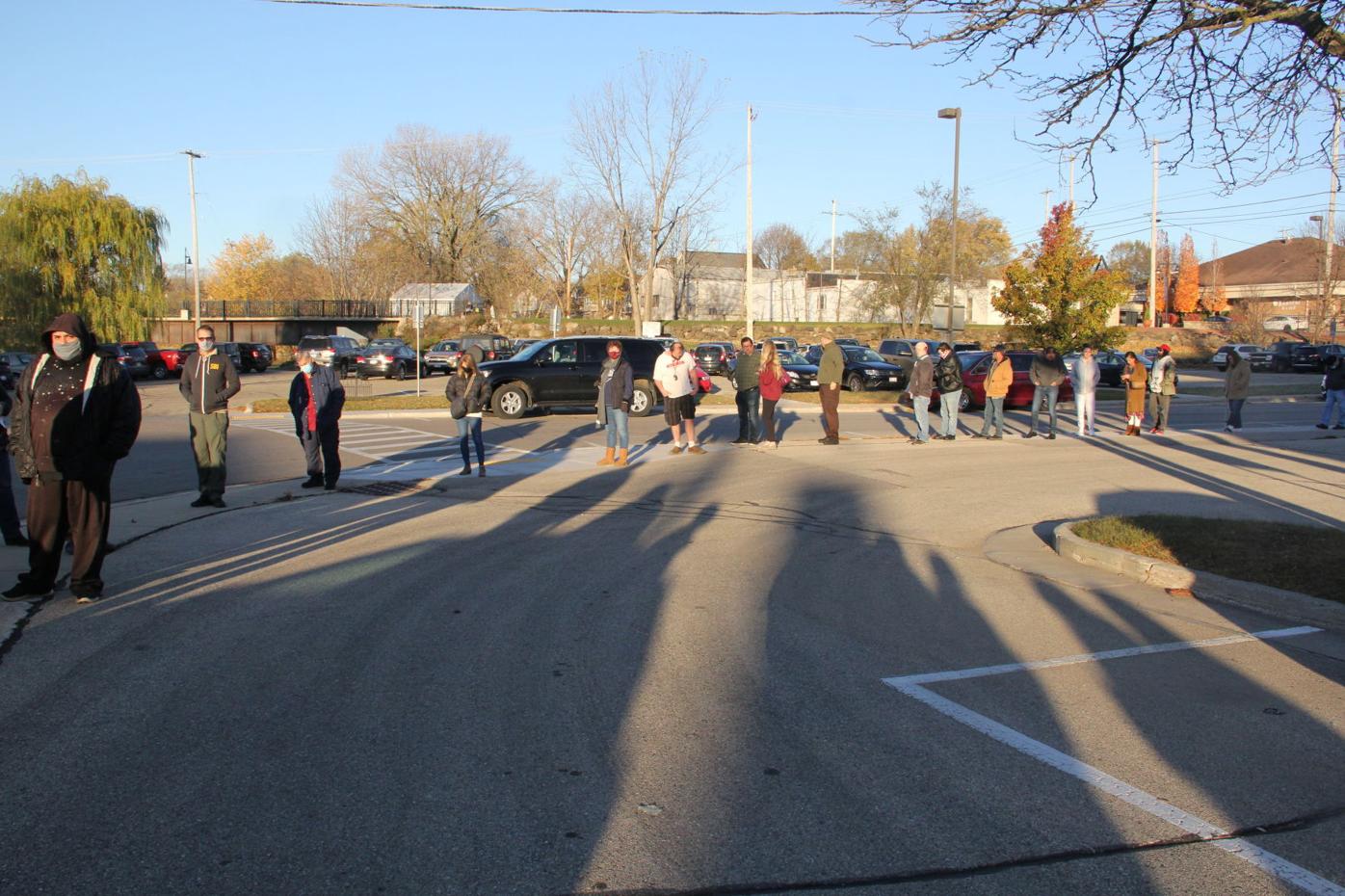 Fort Atkinson voters turned out early Tuesday to be among the first to vote in the presidential election. By 7:25 a.m., the line had turned around the corner and along the back parking lot of the municipal building. 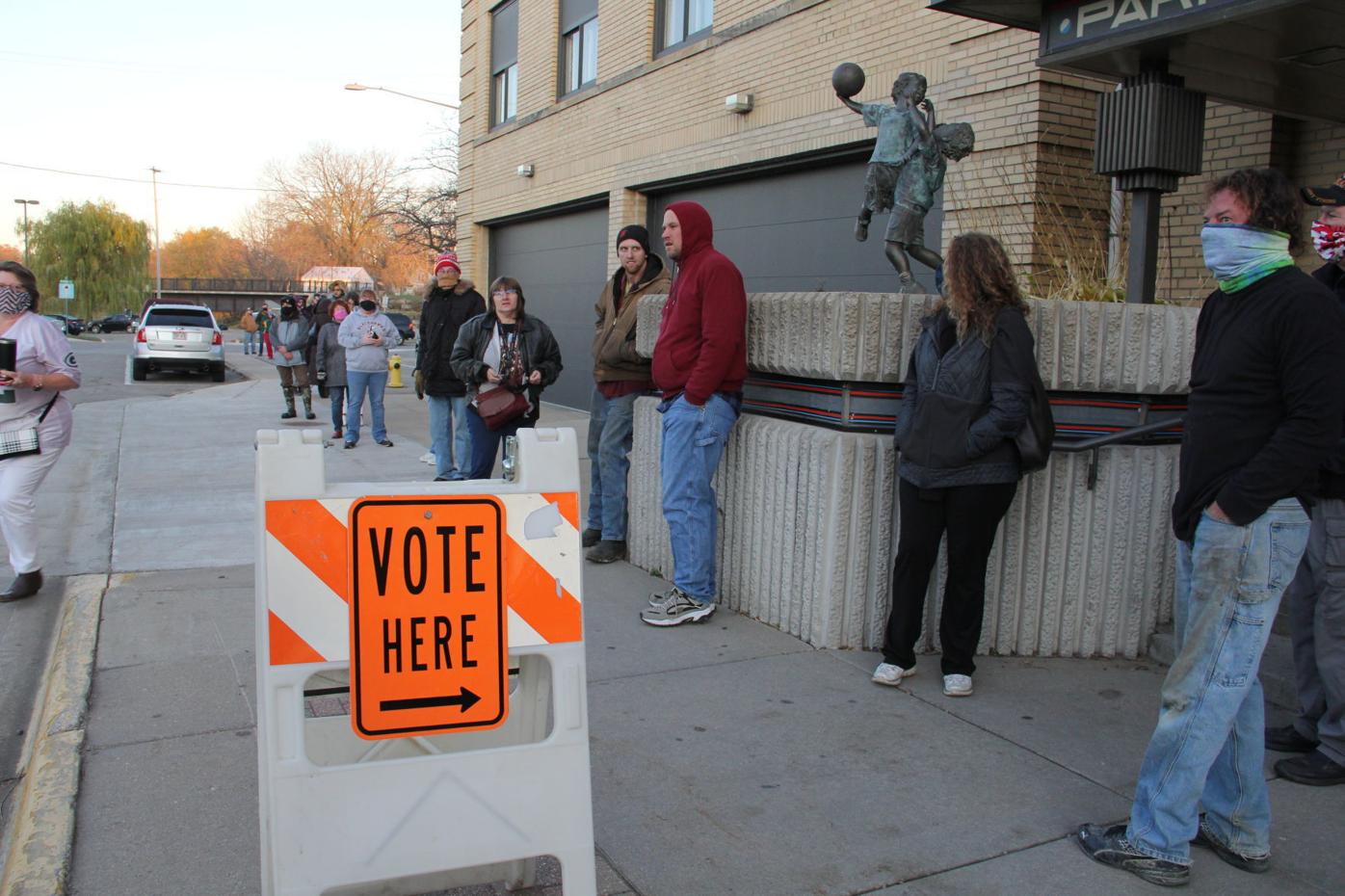 Voters line up at the Fort Atkinson Municipal Building about 6:40 a.m. to be among the first to cast ballots in Tuesday's presidential election.

Above, Tom and Karen Ulrich and their daughters, Sophia and Josie, are among the more than 125 Fort Atkinson residents lined up when the polls opened at 7 a.m. Tuesday.

Fort Atkinson voters got up early to cast ballots in the president election Tuesday. Shown here is the line at the municipal building about 7:15 a.m.

Fort Atkinson voters turned out early Tuesday to be among the first to vote in the presidential election. By 7:25 a.m., the line had turned around the corner and along the back parking lot of the municipal building.

Voters line up at the Fort Atkinson Municipal Building about 6:40 a.m. to be among the first to cast ballots in Tuesday's presidential election.

Tom and Karen Ulrich were among the more than 100 Fort Atkinson residents lined up to cast ballots when the polls opened at 7 this morning.

“I have to be at my desk to grade papers by 8 o’clock,” said Tom Ulrich, who teaches World Social Problems at Arise Virtual Academy in Janesville.

“It’s actually been a perfect class for this time in our history,” he added. “The kids have enjoyed it.”

The Ulrichs, joined by daughters Sophia and Josie, said that they always like to vote in person on Election Day.

“That’s why we come early, because we want them to come vote with us, Karen, who teaches special education at Fort Atkinson High School, said of her daughters.

Tom said that if he didn’t make it back home to start his virtual class, he would have to text the students to tell them not to log in yet.

“That is why this should be a national holiday like it is in other countries,” he said. “Maybe it would be a little more fun. People might enjoy themselves.”

Despite a little chill, Mother Nature brought out sunny spirits.

“Four years, we’ve been waiting,” she continued. “I woke up this morning earlier than I ever would and jumped out of bed early and I’m very excited. That’s what I’m looking forward to … my (I voted!) sticker! Every election, we’re here. It’s very exciting to be part of the process and make changes.”

“I did vote absentee in April, but otherwise, I’ve always voted in person,” she said. “I love it. It is just such a happy day. It’s like a holiday for me. It’s a right that not all countries have.”

The outcome is important, she noted, adding, “but it’s more important that we have the freedom to vote and to say what we need to say through our vote. “

Peterson said she was pleased to see so many people lined up first thing in the morning.

“And it’s awesome to see how many absentee ballots came in,” she said. “It’s amazing. I’m just so happy so many people are taking advantage of voting.

“Every four years, I am glad when voting day comes … except in 2000 with all the chads. I hope we don’t have that issue,” she added, referring to the Florida ballot problems during the Bush-Gore election.

“This is America. I believe we should all go out and vote,” she said. “I believe it is important; that’s what makes us ‘of the people, for the people and by the people.’”

She was voting in person, she said to “make sure that my vote was right. I’m not saying they would do it on purpose, but you don’t know what could happen and this way, I know it’s been counted.”

“And if you don’t at least vote, you can’t say anything for four years,” John Holzli pointed out. “If your voice isn’t heard, then you should keep your mouth shut.”

Tom Freeman said this was an important election.

“I just want to vote in person,” he said. “I think this is a biggie. The aftermath of this could be ugly. We have key positions on the ballot.”

“Up early today. It’s time to vote. I always vote on Election Day,” he said.

So does Bryan Roddy.

“I’m just here to vote because I think it is a right that a lot of people have died for to give us and I think it is right to take time out of your day to vote,” Roddy said.

There is excitement being in line, he said, adding, “I also think it is an opportunity for even neighbors who disagree with each other to stand in line peacefully and do their civic duty.”

Several Fort Atkinson citizens said they were voting in person Tuesday out of concerns about absentee balloting or their ballot not being counted.

“I don’t trust early voting,” Michael Stacey remarked. “I 0want to hand my ballot to somebody. It makes me feel like I actually voted if I’m here on Election Day.”

One man who asked to be anonymous said he tried to vote in 2018, but his ballot was not counted for some reason.

“I’m not sure why ... it wasn’t received or something, but it wasn’t counted. So I definitely wanted to be here in person,” he said Tuesday morning.

Other people in line agreed. Ashna Dhillon said she was excited about voting on Election Day, but that was not the sole reason for being in line early.

“We just didn’t want to risk it and put anything into chance. In person is a better option,” she said.

“I wanted to be sure that there isn’t anything that goes wrong, like a lost ballot,” she said.

Tammy Boese also said that she doesn’t trust the system.

“I’d rather show up. Nothing wrong with that,” she said.

“I’d rather have mine count for sure,” agreed Cedric Davis.

The two said they swung by Friday to vote in-person absentee, but it didn’t look like the office was open.

They encouraged all Jefferson County residents to vote.

“This is the way it should be in every election,” Boese said, with Davis adding, “Even the midterms should be like this. This is important.

“It’s one of the cool things about being an American,” he continued. “We’re not stuck with a king who hands it to his kid who gives it to his kid and they continue with the same tyranny.”

“It is nice to be proud of our country again,” Boese concluded.

Lana Dostie said she was voting in person Tuesday because she moved four blocks since the last election and couldn’t change her address on the website to get her absentee ballot.

“I’m excited to vote for whom I’m voting for, that’s for sure,” said another earlybird voter.

“I wanted to do it personally because I can’t trust the mail-in votes,” she said. “Better safe than sorry.”

Several people in line said that they had concerns about the coronavirus pandemic, but felt that the sanitizing and other health guidelines implement would keep everyone safe.

“I thought it would be OK if you stay far enough away from each other and wear the mask,” Warren Blackman said. “Usually when you are in line outside, there is a small crowd, so it’s relatively safe. I brought a pen along and sanitized my hands before coming; I like to vote on Election Day.”

The pandemic also was on Michael Wichmann’s mind.

“Whoever gets elected, I hope he takes care of the coronavirus and takes care of the health system,” he said. “My son at home has muscular dystrophy and it is very difficult to get him to the hospital and take care of his doctor appointments with the health-care system that we have.

“I feel no president we ever have had has done a very good job,” he continued. “I know they’ve tried, but I haven’t seen anything thus far. It’s quite hard and I would really love for the coronavirus to go away.”

Wichmann said that there have been numerous cases of COVID-19 at his place of employment.

“We all are doing our best, but it needs to be taken a little more seriously by a lot of more people,” he said of the pandemic.

And like the Ulrichs, several voters were in line because they wanted to vote before going to work.

Jeffrey Batz noted that he was going to be late for his 7 a.m. job, but that would not be a problem.”

I’m just going to get it done,” he said of voting in person. “I never vote early absentee. I just want to meet the people and all that. It’s exciting. I think Trump is doing really good for us, but a lot of people have different opinions.”

He said he wished that there would be high turnout for all elections.

Tammy Kaplan works in Madison and thus wanted to cast her ballot before heading to her job.

“But it is worth it to be late today,” she said. “I was going to vote early, but the hours were limited so I couldn’t make it work with work.

“ I couldn’t believe the line this morning. I got here 20 minutes early and I’m still here with 50 people ahead of me,” Kaplan added. “I was in Chicago for 30 years, so coming back to Fort and seeing this, it is quite an impressive turnout.”

While politicking or wearing campaign buttons and the like are not allowed close to the polls, a couple folks in line did indicate their presidential preference.

“I’m here to vote for Trump,” Rick Clevenger said. “I absolutely always vote in person. I think this is the way it’s supposed to be done.”

His wife, Melissa, agreed: “I have the same thoughts.”

And Tom May said that he was “just doing my part to keep the Trump economy going along. I want to put the ballot in myself.”