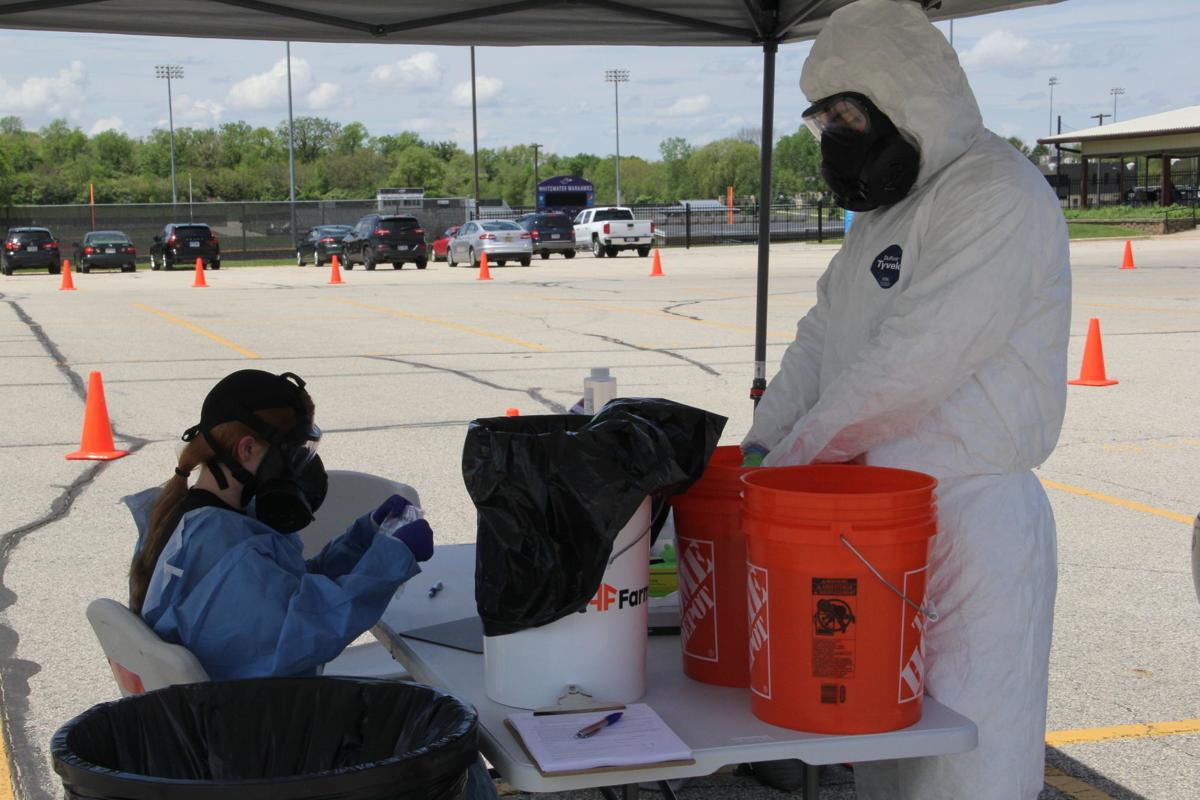 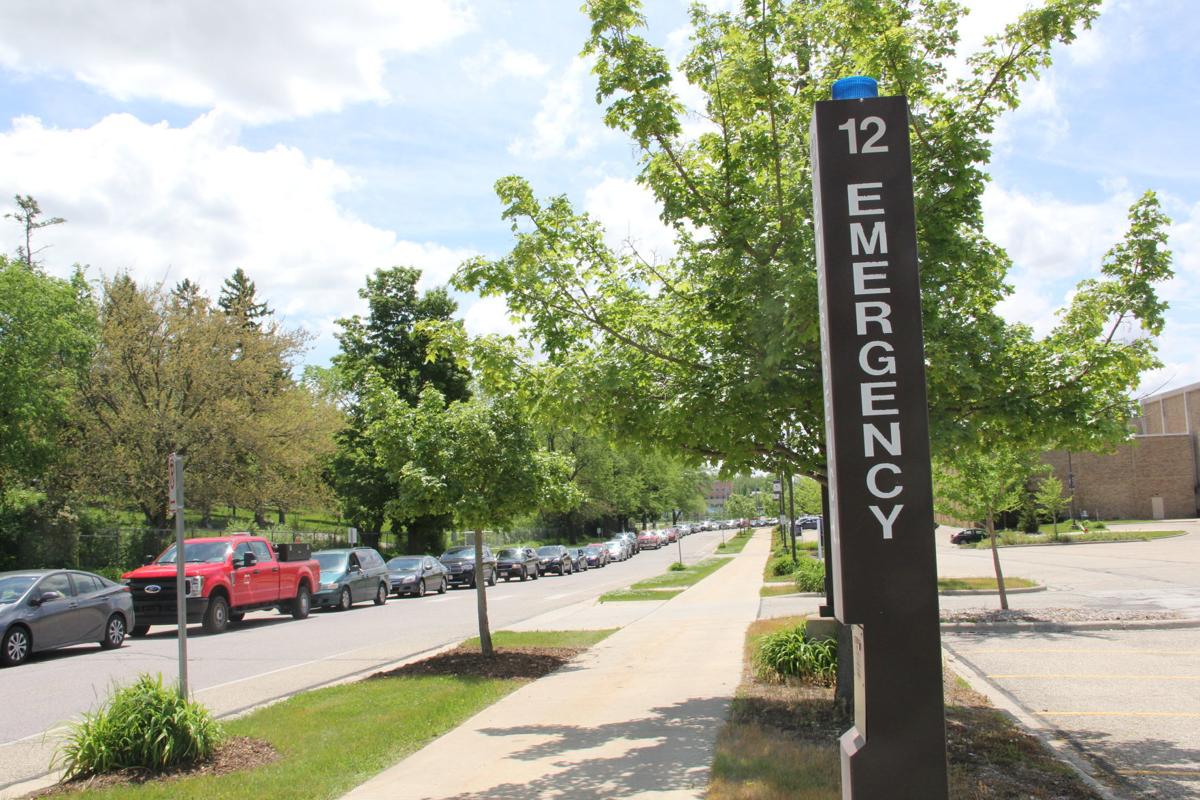 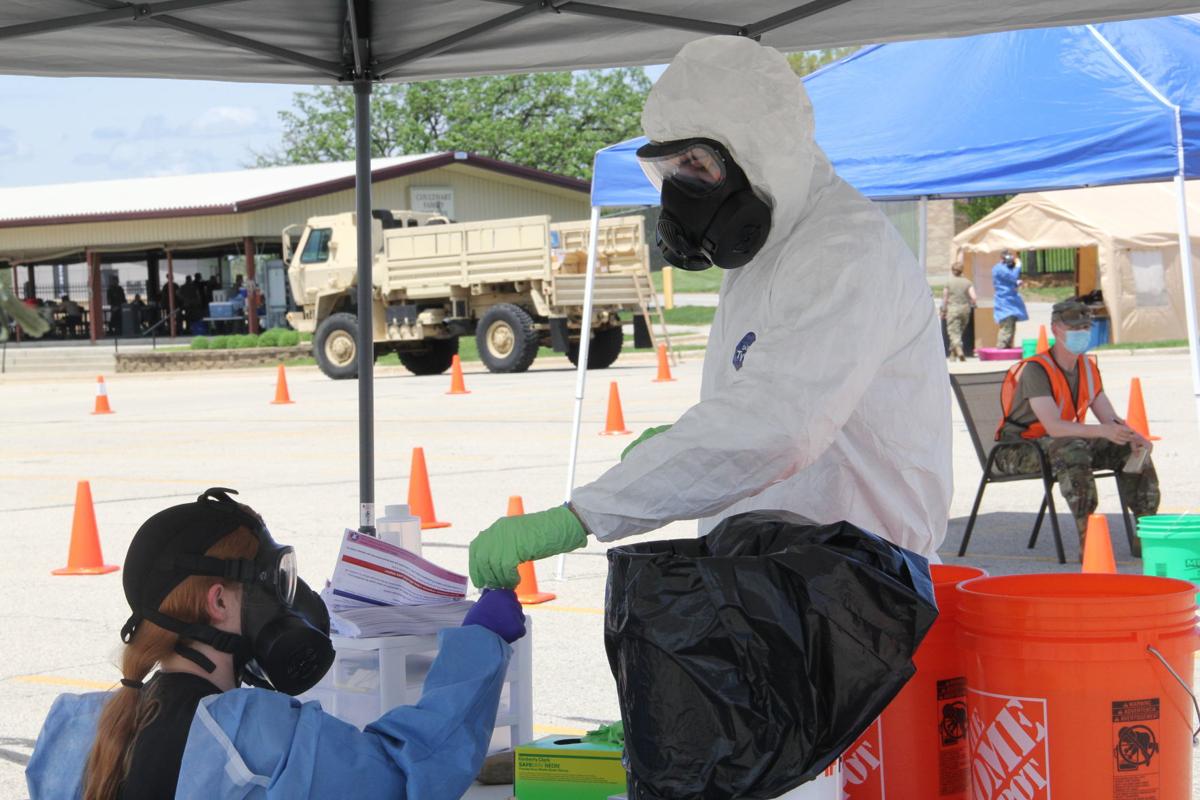 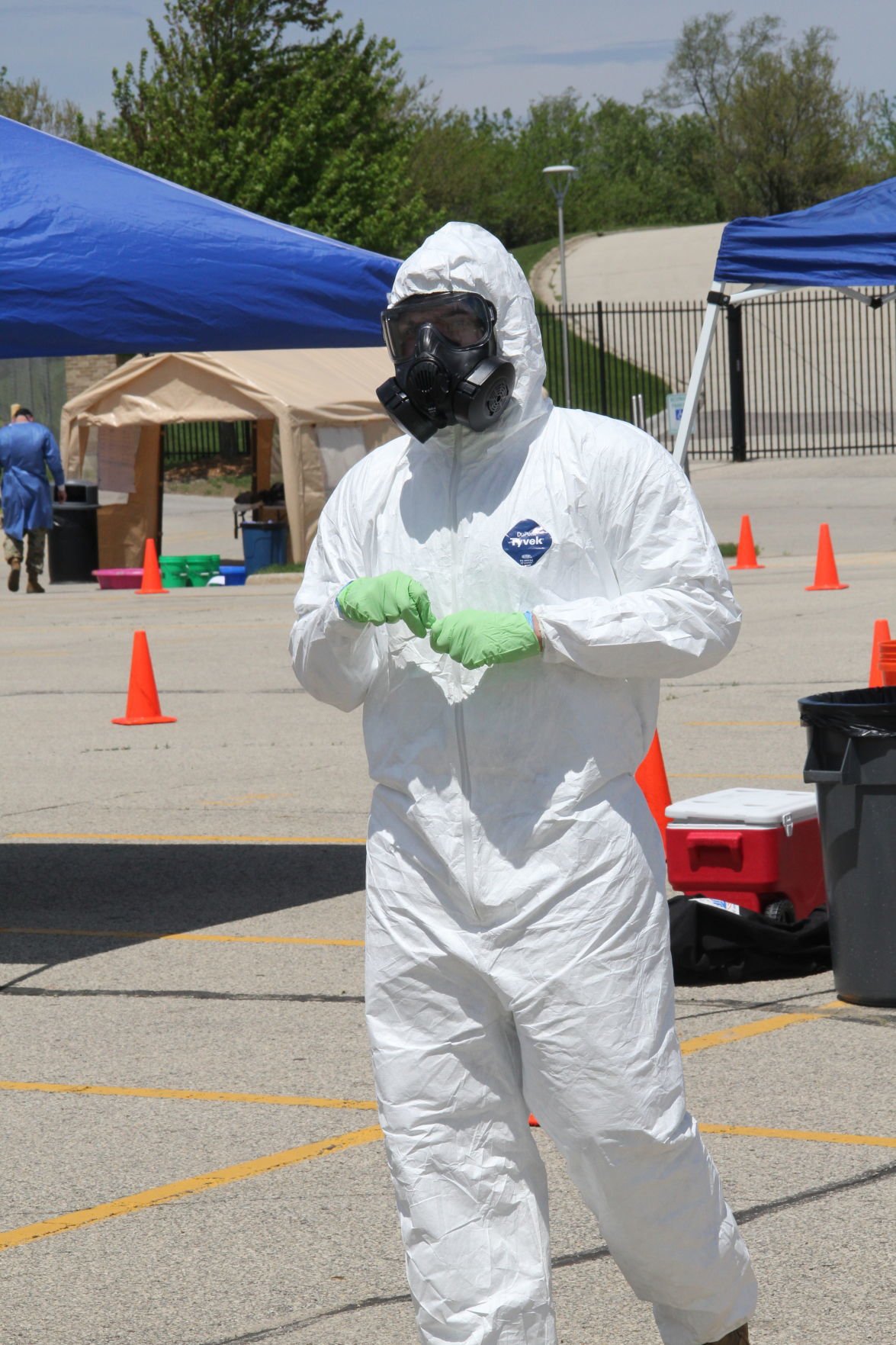 WHITEWATER — Glen Ledbetter pulled his truck into an empty parking lot and waited for his co-worker, who rode in on a motorcycle.

“Somebody in our shop ended up getting COVID, so they shut our shop down,” he said as he stood outside Perkins Stadium on the University of Wisconsin-Whitewater campus Wednesday. “I guess over the weekend he got tested.”

After that positive test, management at their workplace told everyone to get tested.

Ledbetter and co-worker Elliott Stone drove up from Pewaukee, where their plant employees are authorized to get a free test offered by the Wisconsin Army National Guard, which has set up test sites across the state.

The two co-workers were joined by hundreds of Jefferson and Walworth county residents who waited in a long line of vehicles as workers dressed in full protection gear and facemasks administered swab tests in the first of four days for this site.

“Pull up, wait, give your information, swab your nose and that was it,” Ledbetter said.

Now, they will wait three to five days for their results.

While many people have said the test is like being swabbed all the way to your brain, both Ledbetter and Stone said it was not like that at all.

“Kinda tickles,” Ledbetter said, adding that he tried not to chuckle.

Drive-up testing with no appointment began a little more than two weeks ago in Wisconsin, with the first test sites located in Madison and Milwaukee. The sites are operated by the Wisconsin Army National Guard.

As part of Gov. Tony Evers’ goal of testing 85,000 people a week in the state, the sites differ from going to a hospital to get tested. At these sites, all people can be tested, even if they have no COVID-19 symptoms.

“We plan on doing about 3,000 tests over the course of four days,” said Stg. 1st Class Aaron Wallander, who was one of many military personnel working the Whitewater site, along with local staff.

“We are operating rain or shine,” he said. “We are testing everyone — symptomatic or asymptomatic.”

Testing takes place from 11 a.m. to 7 p.m. daily through Saturday in the parking lot outside the stadium. No appointment is needed.

It is open to all Wisconsin residents ages 5 and older. A photo ID is not required, but attendees must provide their name, current address, date of birth and telephone number, in order to receive their results in a few days.

On Wednesday, there were so many vehicles waiting for tests that it looked like a football Saturday, but the line moved rather quickly. Once in the parking lot of the stadium, people were told which or the four or so lines to drive into wait for their test.

Despite the day being very sunny, muggy and warm, workers donned full face gear with shields, opening swabs under the protective shade of a tent then administering the test to a person, who remained in their vehicle.

Since the National Guard started testing around the state a few weeks ago, they have collected 70,000 specimens.

There are 25 National Guard teams that continue to operate across Wisconsin supporting local health departments and COVID-19 testing efforts, two of them assigned to Whitewater. They are comprised of more than 600 soldiers.

As of Wednesday, there were 92 positive cases of coronavirus in Jefferson County with 2,506 people tested. Three people have died.

In the state, there are 16,462 confirmed cases of COVID-19 in Wisconsin, with 539 deaths, according to the state Department of Health Services. More than 210,000 tests have been done. Of all the people tested, 3 percent of them were positive.

The actual number of infections is thought to be higher because many people have not been tested. And people can be infected without feeling sick.

State health officials also are urging caution as state and local governments are lifting restrictions, and allowing businesses to reopen.

In addition to Whitewater, which focuses on Jefferson and Walworth county residents, testing sites include:

Dane County: Two teams established a community-based testing site at the Alliant Energy Center in Madison May 11. Nearly 7,500 specimens had been collected as of May 27.

Dodge County: Two teams started specimen collection May 26 at the Dodge Department of Corrections facility in Juneau and has collected over 350 specimens as of May 27.

Fond du Lac County: Two teams started specimen collection May 26 at the Waupun Correctional Facility and had collected nearly 1,000 specimens as of May 27.

Milwaukee County: Three teams established a community-based specimen collection site May 11 at 2701 S. Chase Avenue (UMOS) and it had collected 11,627 specimens as of May 27 (the May 26 daily total was 944).

Racine County: One team established a community-based testing site at Festival Hall in Racine May 18 and had collected over 2,800 specimens as of May 27.