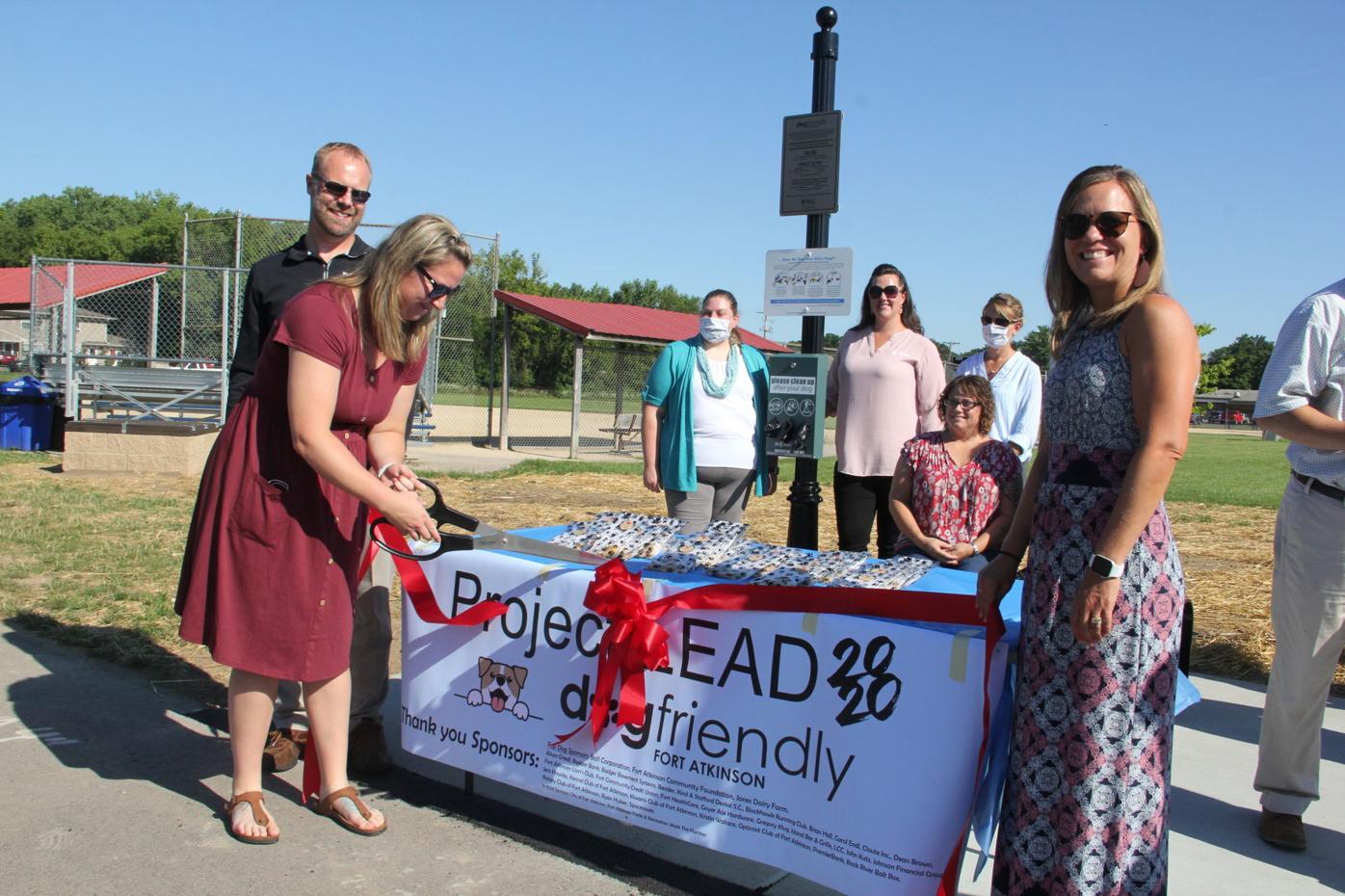 The Fort Atkinson Area Chamber of Commerce’s Project LEAD XXXII class has installed dog-walking amenities throughout the city’s parks and greenspaces. The ribbon-cutting ceremony took place along Rockwell Avenue near J.F. Luther Elementary School’s softball and soccer fields, where a dog waste station, bench and dog- and people-friendly water fountain have been installed. Above, co-project leaders Robert Cassiday and Heather Hartwig hold the ribbon while Trista Taylor, member and administrative assistant at the Fort Atkinson Parks and Recreation Department, snips it. In the back are Heather Traxler, Tracey Carlson, Becky Brom and Kayla Brown. 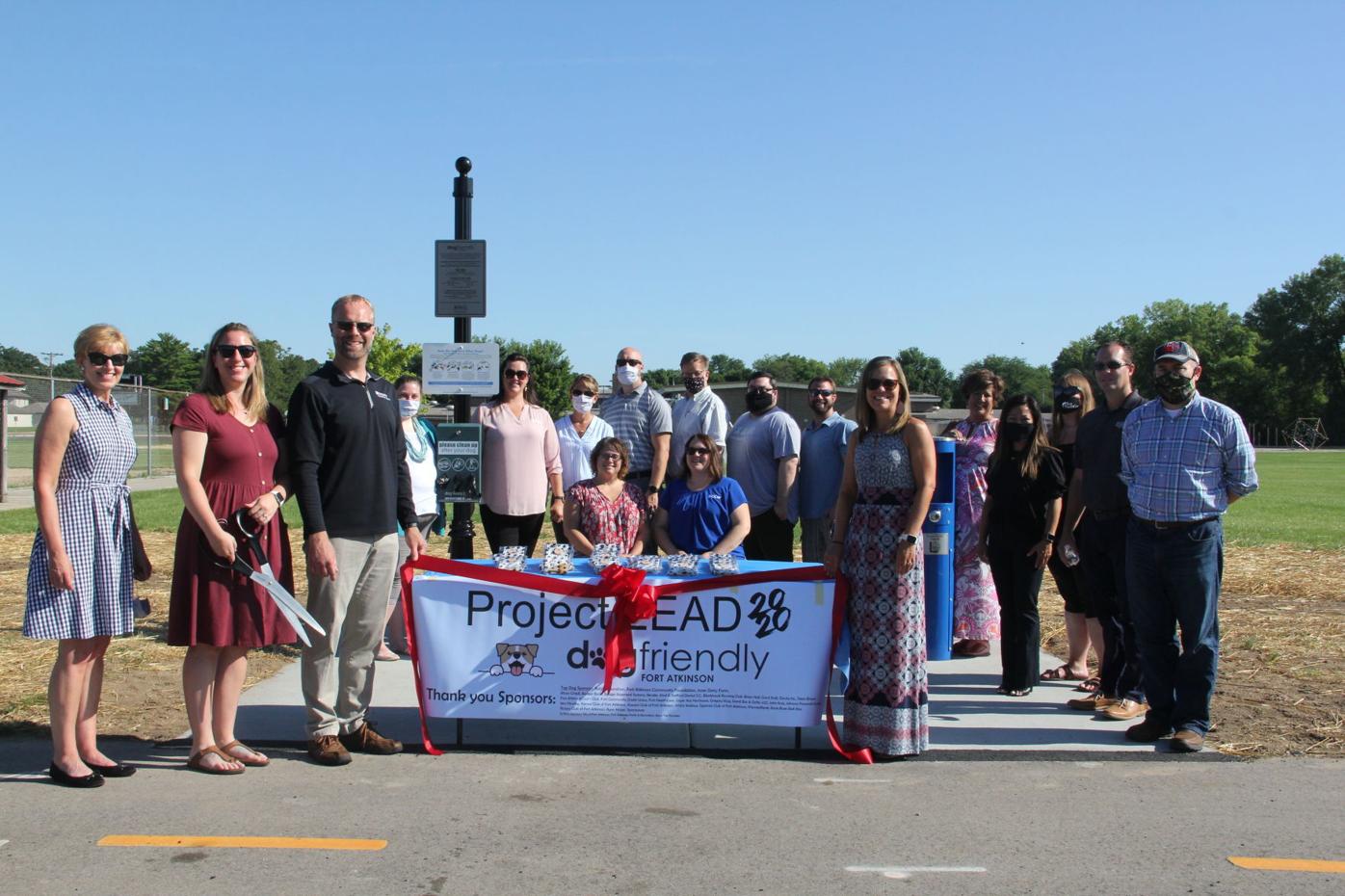 The Fort Atkinson Area Chamber of Commerce’s Project LEAD XXXII class has installed dog-walking amenities throughout the city’s parks and greenspaces. The ribbon-cutting ceremony took place along Rockwell Avenue near J.F. Luther Elementary School’s softball and soccer fields, where a dog waste station, bench and dog- and people-friendly water fountain have been installed. Above, co-project leaders Robert Cassiday and Heather Hartwig hold the ribbon while Trista Taylor, member and administrative assistant at the Fort Atkinson Parks and Recreation Department, snips it. In the back are Heather Traxler, Tracey Carlson, Becky Brom and Kayla Brown.

Fort Atkinson has become an even more dog-friendly city with the addition of watering and waste stations for man’s (and woman’s) best friends.

It replaced two existing dog- and people-friendly water fountains and added one new fountain at the J.F. Luther Elementary School softball fields. The fountains, which include drinking water, water bottle-filling and dog bowl faucets, are Americans with Disabilities Act-compliant.

In addition, the class added eight new waste stations along dog-walking areas: Two each at Ralph and Rock River parks, and one each at Trailway, Jones and Arrowhead parks and at the J.F. Luther Elementary School softball fields.

Existing waste stations are located at the Festival Foods/Ace Hardware intersection; three at Rock River Park, one of which was replaced; and one unit at Farmco Lane along the Glacial River Trail.

Finally, leadership class members placed in the city’s parks 11 educational signs regarding dog ownership and behavior. Topics include: Dog body language, the importance of microchips in finding lost pets, the importance of spaying and neutering pets, the dangers of chip bags and suffocation, how to properly approach a dog, who to call if one loses a pet, dangerous food for dogs, the “do’s and don’ts” of dog training, the Yellow Dog Project, “Does my dog love other dogs?” and the dangers of hot asphalt.

In reflecting on their project following the ribbon-cutting, co-project leader Heather Hartwig said much hard work and dedication from many people went into completing the dog water and waste stations throughout the community.

“We had a really great group of folks (Project LEAD class) that really put their heads together and had to think outside the box in order to determine the project, as well as determine how we were going to obtain the funding to do such a large project,” Hartwig said. “We all really wanted to go in with something pretty large to be impactful to Fort Atkinson.”

However, the COVID-19 pandemic became yet another obstacle for the class to overcome, she said.

“Everybody put their heads together, really thought hard, and came together as a group,” Hartwig said. “Once we had some additional funding, which was fantastic, we actually thought about what else could we do.”

And that’s when the pedestrian bench entered the picture, she added, noting there are a myriad of activities that occur on the J.F. Luther fields, from softball to soccer to the Blackhawk Running Club. And those young athletes need a source of drinking water to stay hydrated.

“To bring not only the dog-friendly amenities (and) the walking amenities for the individuals, but also all of these sporting youth events to have the water available to them now in two locations is really beneficial,” Hartwig stated.

“It was just amazing, the partnership we were able to share with them,” Cassiday commented. “And just when we were in the fundraising piece — knowing what the world was going through (with the pandemic) — the generosity of the businesses and individuals in the community was just short of amazing.”

“The group voted to make Fort Atkinson a more dog-friendly place,” Taylor said. “So, we added three total water, units which are people- and dog-friendly. And, specifically we made J.F. Luther our primary location because Rockwell (Elementary School) had been finished, and now we have a lot more traffic with adding the bike addition and walk trail.”

Therefore, she said, J.F. Luther is the one location where every enhancement the Project LEAD class raised monies for — including a dog-waste station, educational signs and a water fountain — can be found.

“We did, also, fundraise for a bench, considering that this (Luther) location is used by the community with soccer, and Fort Parks and Rec softball leagues,” Taylor pointed out.

And the fields’ close proximity to Luther Elementary School, she said, made it an ideal location for the water station.

The administrative assistant characterized this year’s Project LEAD class members as having been “a resilient group.”

“We hit our fundraising right when COVID hit and everybody shut down,” Taylor said. “We’ve conquered a lot of hurdles and still came out having a great project that makes Fort Atkinson a great community.”

“Project LEAD participants had more hurdles than any in recent history, working toward one goal at high speed (a possible dog park), and having to pivot in another direction (water stations and waste stations) without losing ground,” she said. “They launched their fundraising efforts just as the world economy was shutting down.

“Really big decisions had to be made virtually,” Chisholm added. “Resiliency and tenacity are not usually the outcomes of this leadership training program, but this class had plenty of opportunity to practice these traits. I am so proud to be associated with the Project LEAD Class of 2020 and all they have accomplished.”

In-kind donors were the City of Fort Atkinson, Fort Atkinson Parks and Recreation Department and Mark the Plumber.

Project LEAD also has received support and assistance during the planning of its project from the following School District of Fort Atkinson employees: Josh Carter, grounds and maintenance; Jason Demerath, director of business services; and David Geiger, Luther principal.

The School District of Fort Atkinson gave permission to place the water/waste units on its property. The City of Fort Atkinson will maintain and fund the dog waste and water stations. However, all city water fountains have been shut off during the coronavirus pandemic.