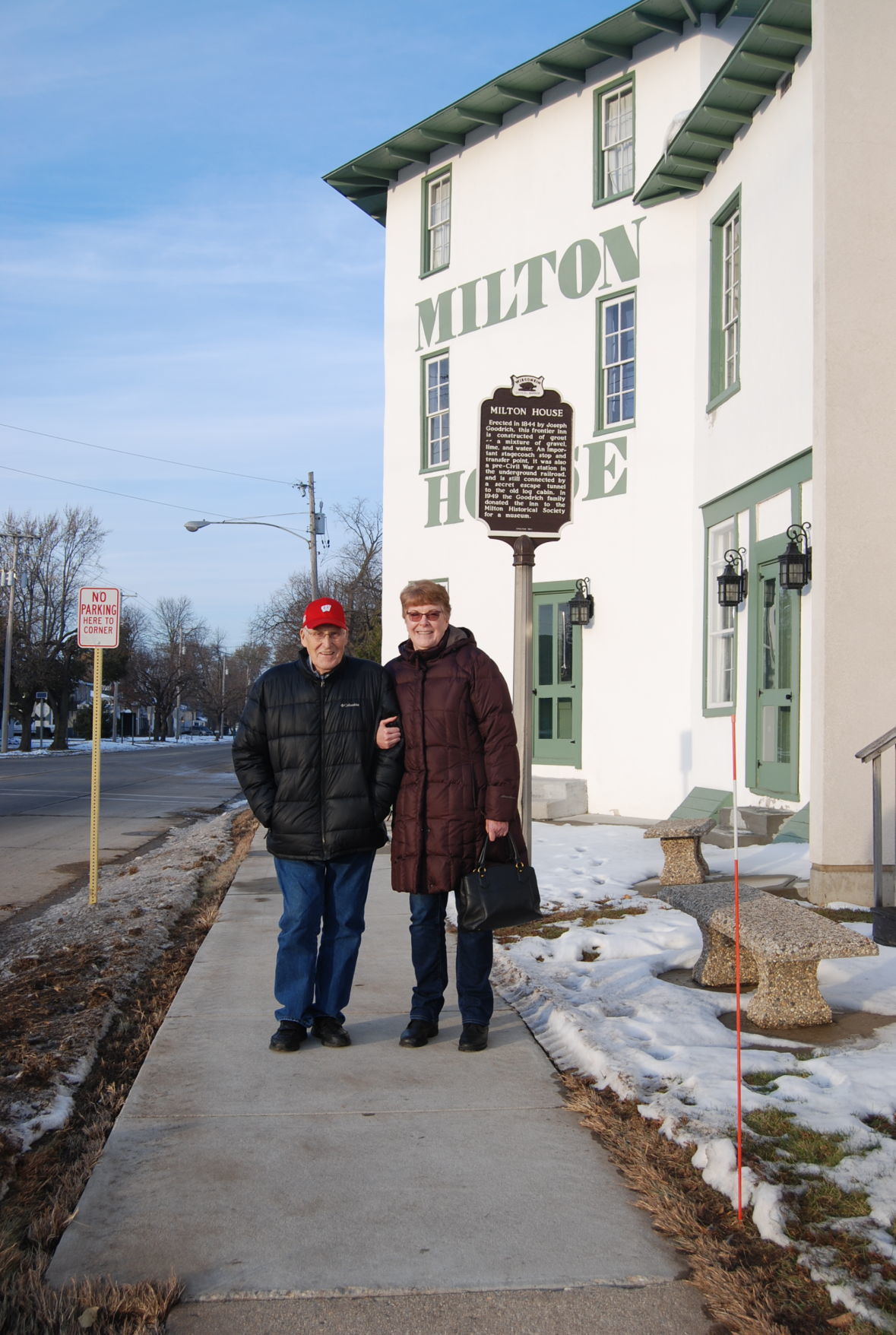 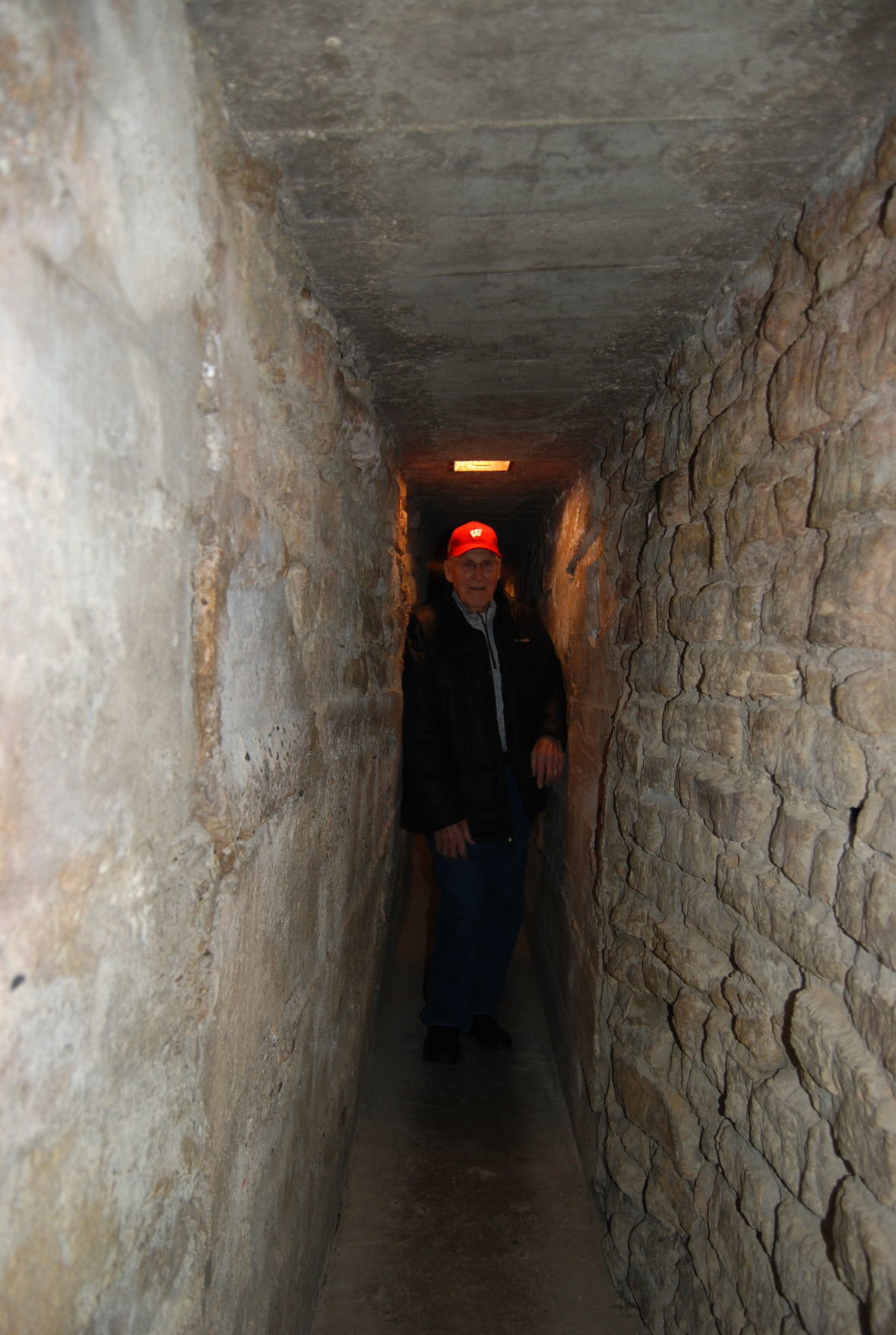 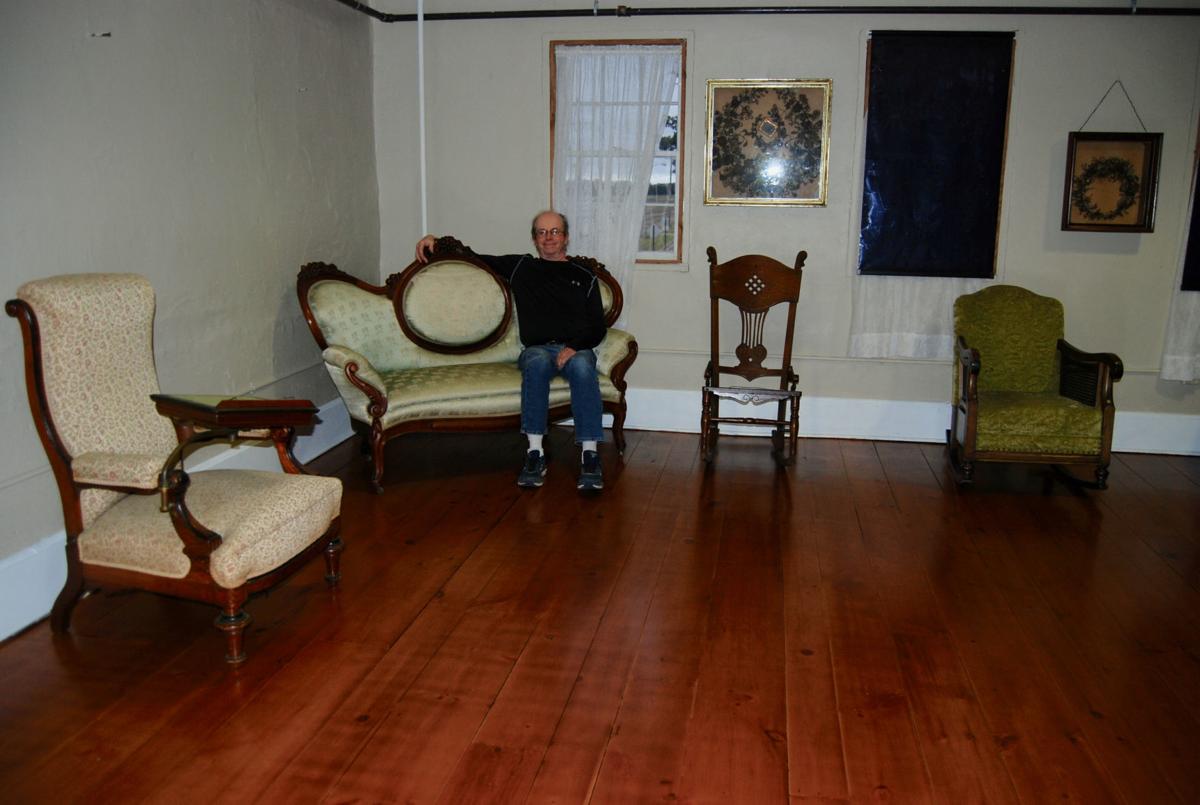 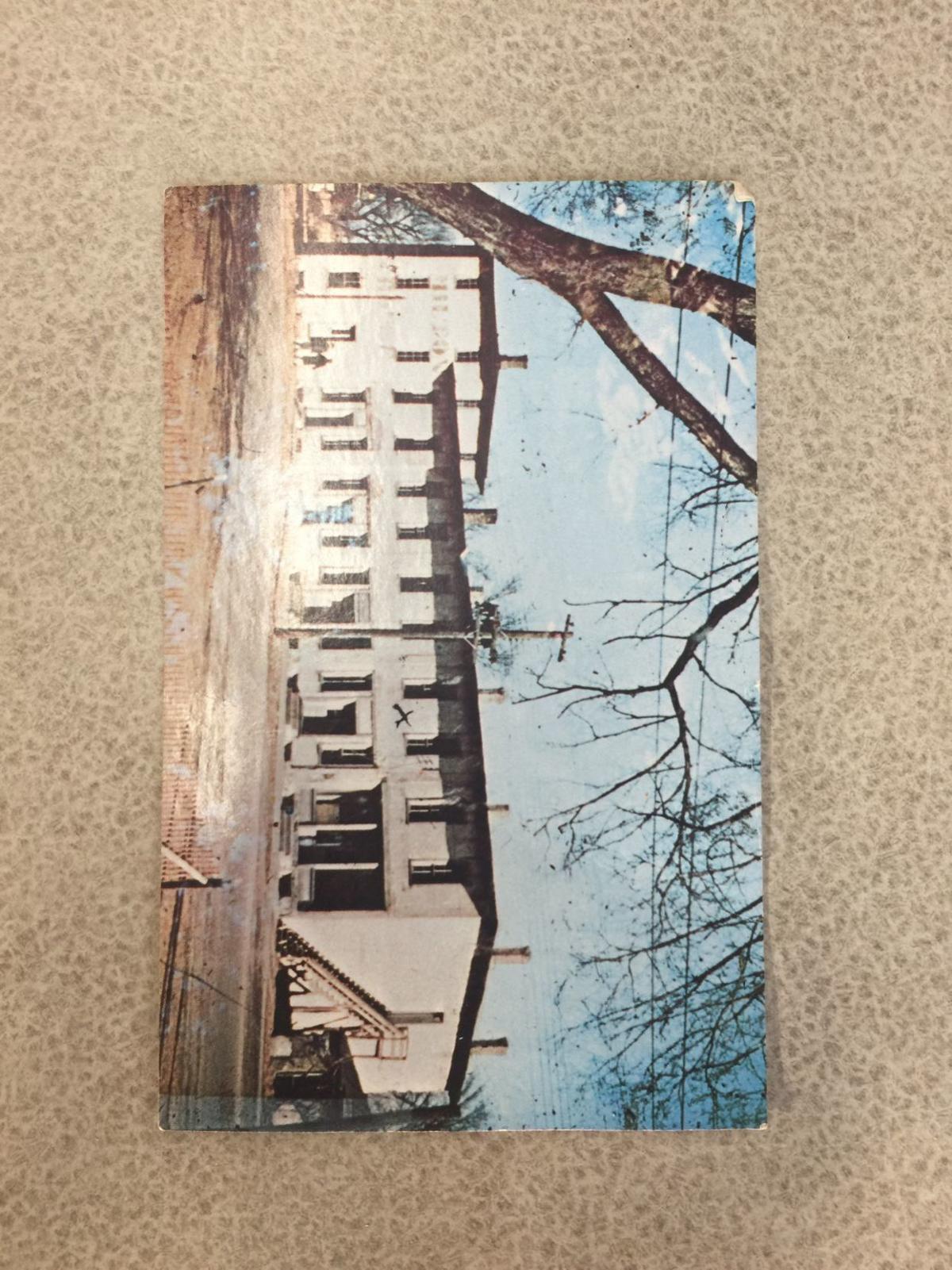 An “X” on this postcard marks the windows of the rooms where Joe Roberts and his family stayed in the 1930s. The family relocated from South Dakota to Milton during the Great Depression.

An “X” on this postcard marks the windows of the rooms where Joe Roberts and his family stayed in the 1930s. The family relocated from South Dakota to Milton during the Great Depression.

MILTON — Joe Roberts was 2 years old when his family moved from South Dakota to Milton.

“Things were not good when we came down. It was the 30s; it was bad,” the Town of Fulton man said.

In 1929, when he was 2, Joe said his family left Watertown, S.D., after his father, Marion, learned of work at a General Motors plant in Janesville, Wis.

In South Dakota, Marion had been employed by the railroad. The company was planning to change his responsibilities, so Marion opted to look for different opportunities, Joe said.

At the time, Joe was the youngest of four children. Four more would one day follow, he said.

Joe recalled traveling by car, pulling a trailer with the family’s possessions behind. They spent a night in a park in Evansville before arriving at the Milton House, he said.

“I remember going upstairs, and turning to go down this long hall,” he said of the Milton House. “There were big rooms. I remember the floors were plank and it (the apartment) had heavy walls.”

While the apartment in which Joe’s family stayed was lost in a building collapse in 1948, Milton House Museum Assistant Director Doug Welch said a similar apartment is being converted into an exhibit and is a good example of how each of the upstairs boarding units once looked.

The apartment consists of two large rooms, one of which would have functioned as a kitchen and family area and a second was used as a bedroom, Welch said.

At the time of Joe’s family’s arrival, the Milton House was in poor condition.

“It would have been low-cost housing,” Welch said.

Joseph C. Goodrich died in 1917 at the age of 63. He ran a grocery store in the portion of the building known as the block or wing, a two-story structure extending from the hexagon-shaped, three-story portion of the building. The block housed businesses on the first floor and two-room apartments on the second.

While a structure resembling the block still exists today, most of the original structure no longer stands, Welch said.

Welch described Joseph C. as active in community affairs, serving on the village and school district boards. He lived in a home built by his father, Ezra, in 1867. The cream brick structure, 742 E. Madison Ave., serves today as a home and antiques shop owned by Terry and Joe Williamson.

Lois was the only child of Joseph C. She never married, and after her father’s death, she returned to Milton and became the proprietor of the Milton House, running the upstairs rooms as a boarding facility between 1920 and 1930, Welch said, adding that Lois died in the 1970s.

Among his earliest Milton memories, Joe said, was the Milton Grade School, located across the street from the Milton House and across the train tracks. His three older siblings started school there, he said.

According to Welch, the building Joe described was built in 1869 and served as the community’s elementary and high school until 1920, when Milton Union High School was built. The 1869-built school continued to house the lower grades and was razed in 1968. The school was built on land occupied today by Milton East Elementary School.

“After we stayed in the Milton House for a while, we got our first home on College Street,” Joe said. He described the home as next door on the west side of Harry Crandall’s Meat Market.

“When we moved over by Harry Crandall’s, we had a garden out back and Mom picked flowers on Memorial Day and we marched to the cemetery,” Joe said.

Still, Joe said, once in Milton, things didn’t go exactly as planned: Marion did not immediately get work at the General Motors plant. Instead, the family soon moved to Whitewater and Marion worked at Creamery Package in Fort Atkinson.

“While we were in Whitewater, Dad got word of jobs at GM. He got a job there and said we needed to move back to Milton so he could get a ride to GM,” Joe recalled.

In the years that followed, the plant made trucks and Chevrolet cars, but by 1930, with the onset of the Depression, temporary layoffs began. GM closed the factory in 1932, but began hiring again in 1933, and employment at the plant grew to 3,400 workers by 1937.

Sometime during the 1930s, Joe recalled, Marion was hired at GM, and the family moved back to the Milton House.

At that time, Joe said, “The building was almost empty. I can’t remember anybody living up there then. I remember they had businesses down below.”

Among businesses that occupied first-floor space, Joe said that the puffed wheat factory left him with a strong impression.

They made cereal: puffed wheat and puffed rice, he recalled, describing a “long trough” and machinery that processed the grains. It was loud, he said.

“It would go ‘boom’ and blow all that puffed wheat and rice. It shook the buildings in town; the windows in town would rattle,” Joe said.

He said he believed the machinery might have been partly responsible for compromising the integrity of the Milton House structure.

In his book: “Images of America, Milton,” published in 2016 by Arcadia Publishing, Welch wrote that the wing collapse in 1948 likely was caused by a variety of factors, “including the fact that business tenants of the wing often removed support beams and walls from the lower floors or basement without realizing the structural integrity of the building was being compromised.”

According to Welch, block sections 3 and 4 collapsed. At the time, downstairs business space was either vacant or used as storage. Seven upstairs tenants were displaced.

While few records are available about the cereal factory, Welch said, he has come across some references, including documentation found in a 152-page “Milton House Historic Structure Report,” written in 2000.

“It documents the condition of the structure throughout time. The cereal company is mentioned, but not in detail. In the 1930s, there are references to an unnamed puffed wheat business that was operating from the block,” Welch said.

In the years leading up to World War II, Joe said, he remembered forming friendships and enjoying life in Milton.

“I used to follow Harry (Crandall) around,” he said. “I was with him all summer. He had horses up north, so he’d go around to sale barns and he’d take me with him.

“Marion Stevens was my first playmate. He lived in a house north of the Milton House in a building that had four apartments.”

When he was 8 or 9 years old, Joe said, he and a childhood friend, Wayne Hemmenway, played in the Milton House tunnel.

After living in the Milton House the second time, the family moved to a brick house on Janesville Street.

Joe lived there until he graduated from Milton High School in 1945, he said.

He was a coxswain aboard an LCVP (landing craft vehicle, personnel) or Higgins boat, which he described as a “big boat used to land people and equipment.”

Joe has two adult children, both retired teachers living in the Janesville area.

After Joe and Jean were married, the couple moved to Walworth County and, later, to Janesville. Joe worked in various maintenance jobs with Rock County for 34 years, retiring in 1963.

He volunteered part time in the agricultural department at Milton High School for 18 years.

In 1977, Joe built a home and barn in the Rock County Town of Fulton where he could keep horses.

“I moved out there for horses. Harry Crandall introduced me to horses. I rode my first pony in the Milton parade in 1936,” he said.

His love of horses grew throughout his life, and when he returned from the war, Harry Crandall gave him a horse in appreciation for a youthful good deed.

When he was 10, Joe said, he was looking in a window on a Saturday morning when Harry’s store was closed. He saw smoke, and ran to alert Harry.

His actions likely saved the store from catching on fire, he said.

After moving to Fulton, Joe said, he and his friend, Bill Finster, rode horses nearly every day until 1986.