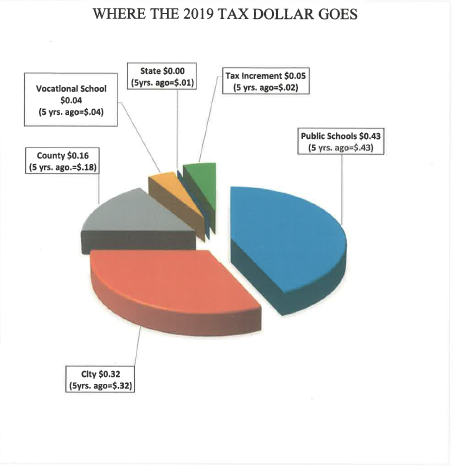 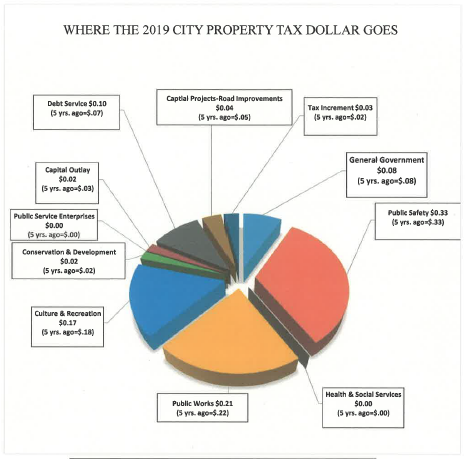 Fort Atkinson property owners will be assessed 19 cents per $1,000 assessed valuation more than last year for city operations when they receive their tax bills this winter.

Overall, the City of Fort Atkinson will collect $23,364,858.01 for city purposes, Jefferson County, the School District of Fort Atkinson and the area vocational school, bringing the total tax rate for Fort Atkinson residents to $25.21 per $1,000 of assessed property value.

The largest portion of a Fort Atkinson resident’s tax dollar will go toward funding the school district, which last week received an “exceeds expectations” grade of 73.1 on the state report card from the Wisconsin Department of Public Instruction.

The public safety departments’ budgets remain largely the same year to year, but capital outlay and debt services aren’t included in this calculation. That means that large projects such as the planned fire station expansion is included in a separate category.

The largest increase in the budget from 2019 is an increase in salary and wages to full- and part-time city employees.

City Manager Matt Trebatoski has said the increase will allow Fort Atkinson to be competitive with area municipalities in the job market — attracting and maintaining talented city employees.

“The salaries are the biggest part of any increases in budget this year,” City Manager Matt Trebatoski said at one of the two October budget workshops. “This was done to stay competitive with surrounding communities and to continue attracting and retaining good employees. We were aware that we were falling a little behind in pay in some areas and wanted to address the issue before it got away from us.”

The pay hike for full-time employees will range from 1.5 percent to 9 percent, depending on the position and other factors. Part-time positions will receive a 2-percent raise and paid-on-call firefighters will be given a 3-percent raise.

At the Tuesday council meeting, a public hearing on the budget was held. With the opportunity to speak to the city council about how tax dollars are spent, no Fort Atkinson residents spoke.

The council also adopted the city utility budgets and rates and approved adding any special assessments and delinquent bills to the 2019 tax roll.

Across the board, full-time City of Fort Atkinson employees will see a collective wage increase of $187,000 after the city council approved th…