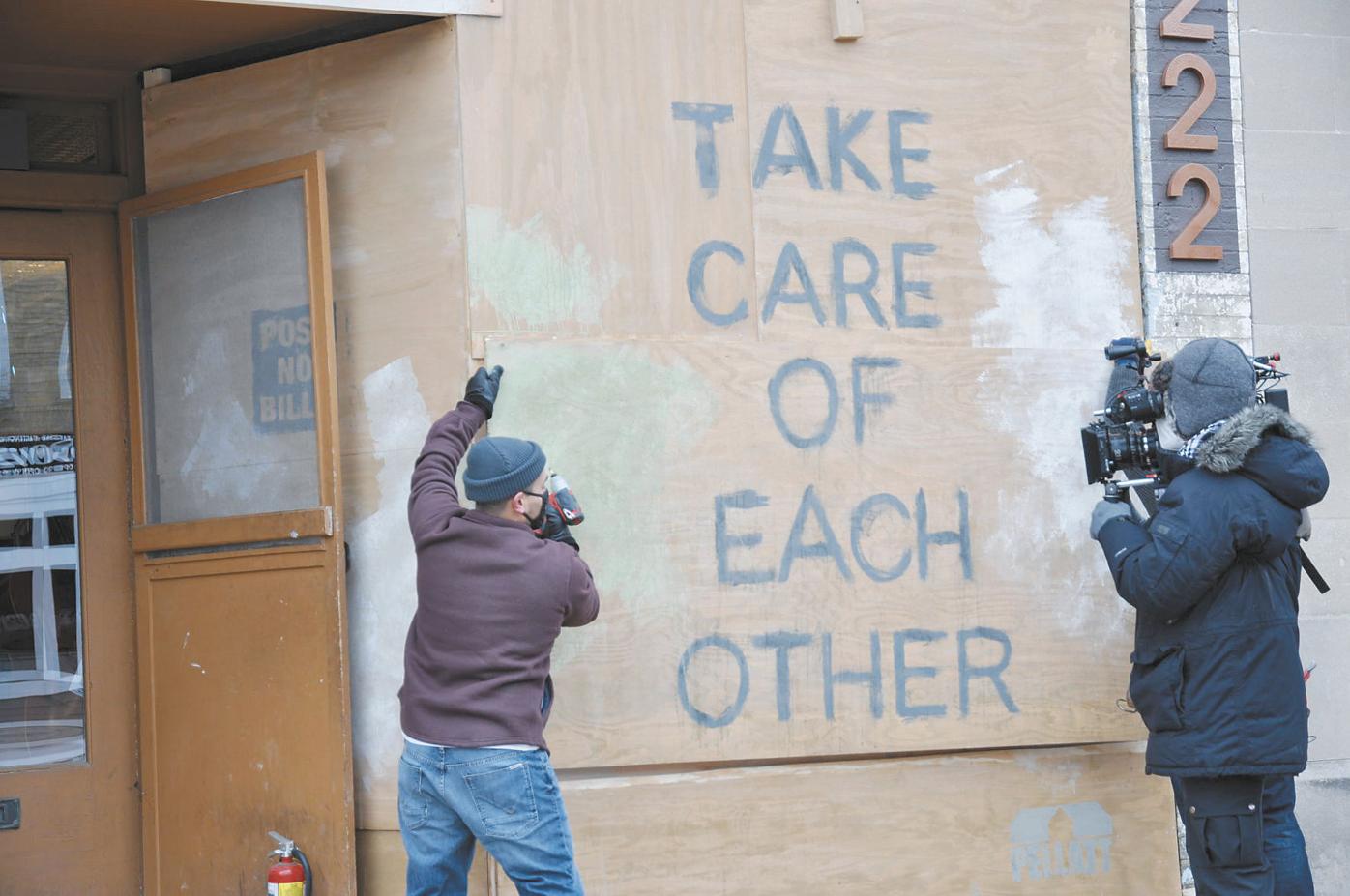 TOP: A scene from the Fort Atkinson portion of a National Football League commercial which aired during the Super Bowl. This portion of the commercial was shot at the Cold Spring Design building downtown. ABOVE:This contributed photo shows Fort Atkinson native and major regional commercial location scout Nick Langholff at Lambeau Field. 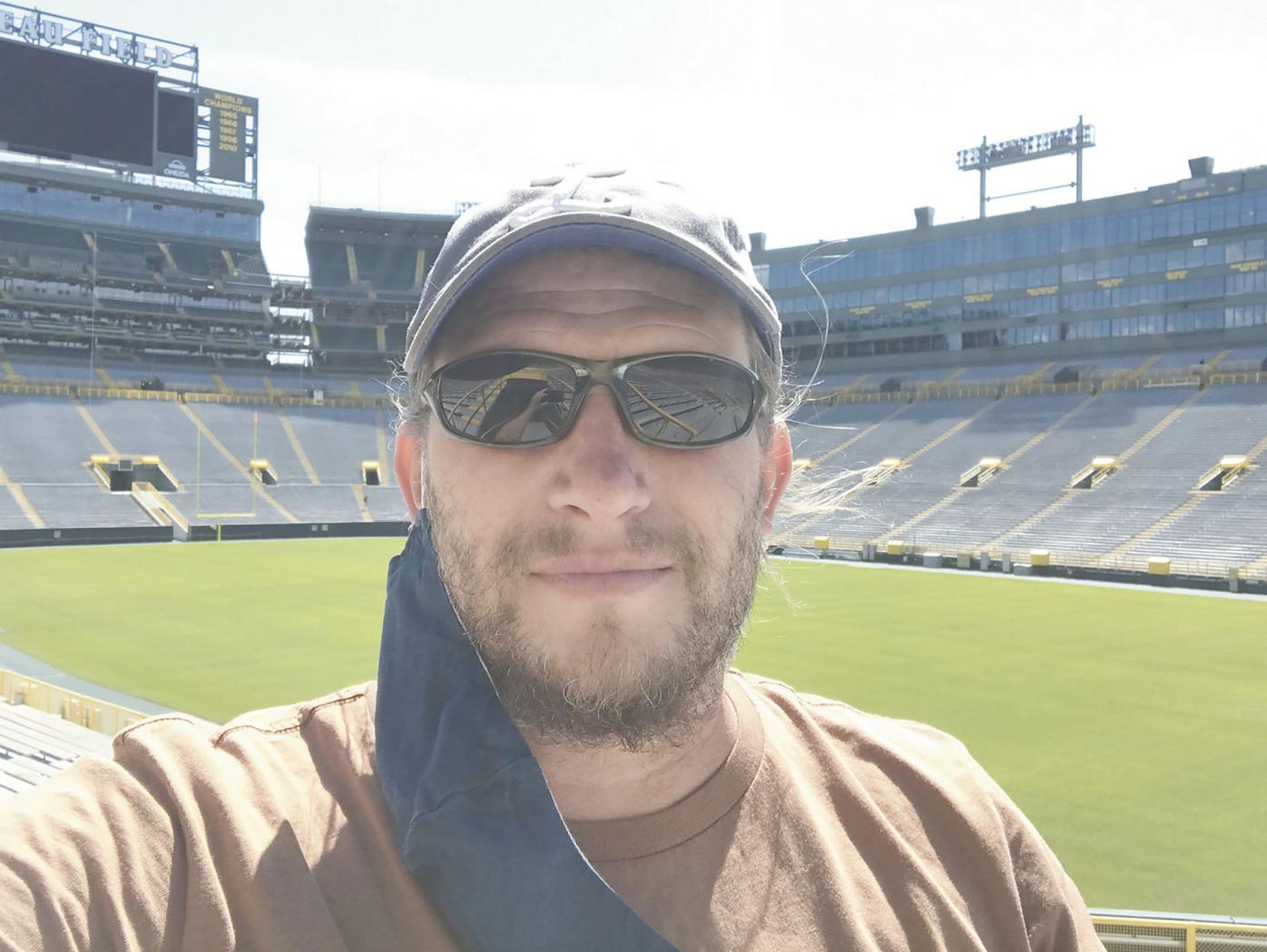 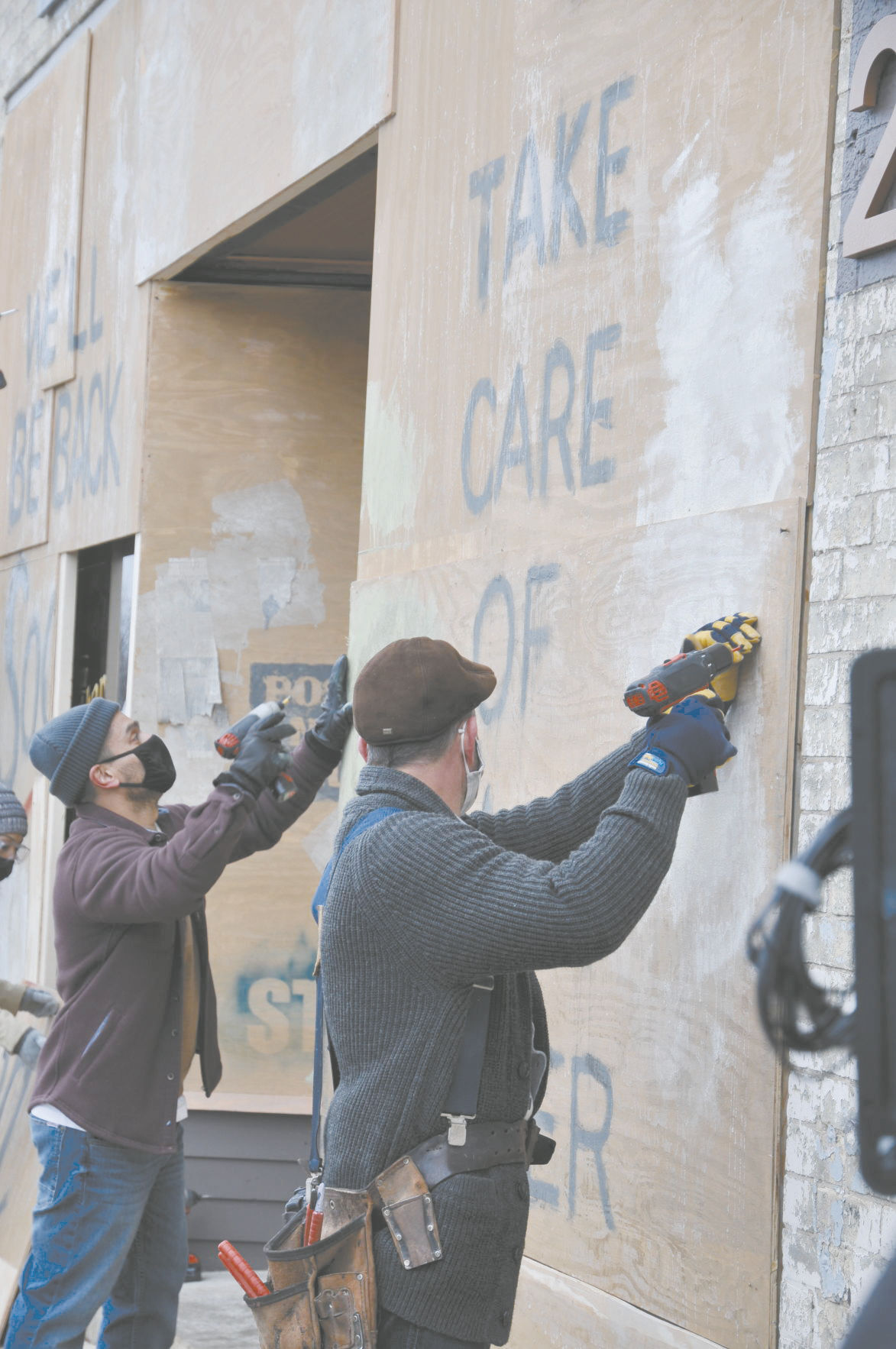 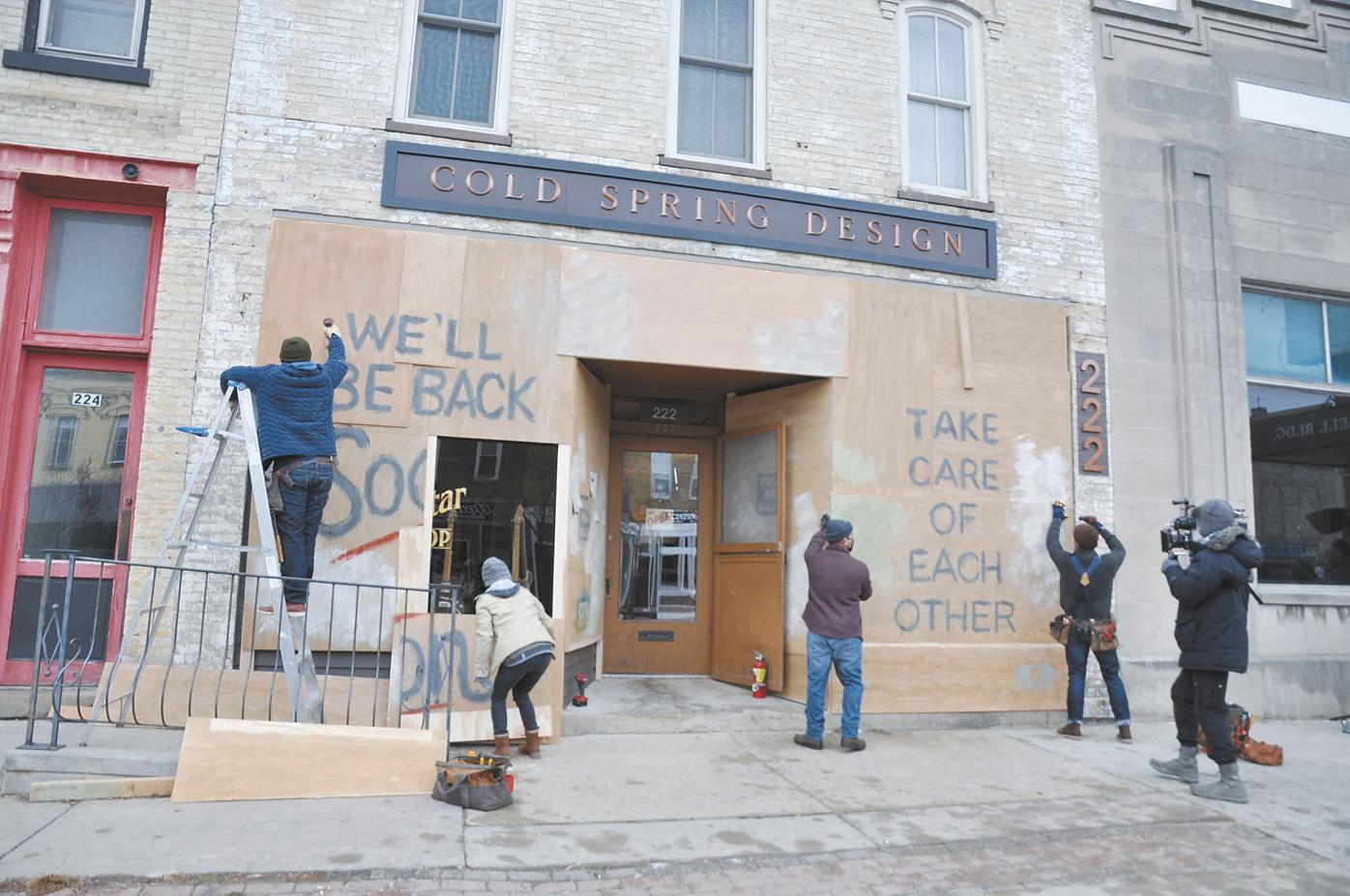 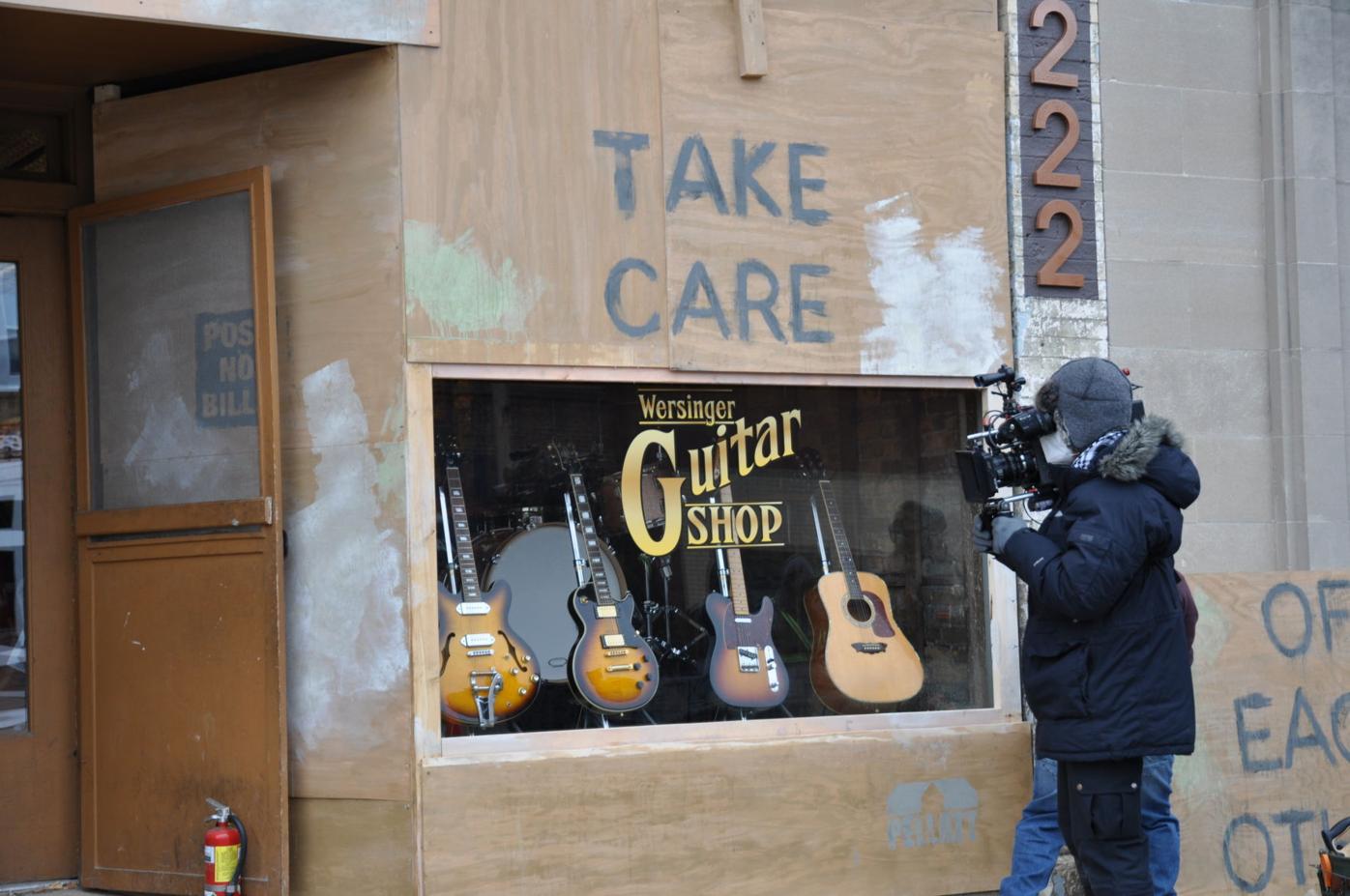 TOP: A scene from the Fort Atkinson portion of a National Football League commercial which aired during the Super Bowl. This portion of the commercial was shot at the Cold Spring Design building downtown. ABOVE:This contributed photo shows Fort Atkinson native and major regional commercial location scout Nick Langholff at Lambeau Field.

It is your typical small town. A mixture of charm and grit, whose residents have persevered through many tough times by coming together like a team.

That's the image filmmaker and location scout Nick Langholff was going for when he sought out a quintessential small-town for a signature NFL ad to run as an opener for the Super Bowl. As he considered communities all across the area to have the iconic image of Vince Lombardi stroll, he just had to sneak in a few shots from his hometown of Fort Atkinson.

As it turned out, NFL representatives really liked Fort’s atmosphere, selecting the local community as one of those featured in the league’s high-profile commercial which premiered during the Super Bowl Feb. 7.

A lot of other Fort Atkinson and Jefferson County strands wound up weaving into the whole process as well.

It’s safe to say none of this would have happened without the involvement of Langholff, a Fort Atkinson native and 1991 graduate of Lakeside Lutheran High School.

Langholff, a filmmaker in his own right and a well-established location scout who has worked on numerous major advertising campaigns, tends to get a call whenever there’s a commercial to be shot anywhere in the state.

“I typically am the first call for the production companies on the coast looking to film in Wisconsin,” the Fort native said.

Langholff’s resume includes 35 commercials with Green Bay Packers quarterback Aaron Rodgers and several with Giannis Antetokounmpo from the Milwaukee Bucks. He also has worked on a recent special on Tony Romo, football player turned analyst who served as announcer for the Super Bowl.

Around a year ago, Langholff got the call about scouting locations for the NFL ad, which was to feature a reenactment of some of the inspirational quotes of Lombardi, who coached the Packers from 1959-1967, leading the team to two Super Bowl victories.

The NFL wanted to showcase elements of Wisconsin that would have been meaningful to the iconic coach, using Wisconsin communities as the backdrop for Lombardi’s own words in quotes meant to resonate with the “hard times” the state, country and world are currently experiencing.

The communities of Green Bay, home of the Packers, and Milwaukee, where the team also played some of its games until the early 1990s, immediately came to mind, but the producers also wanted to touch on the small-town aspect of Wisconsin as a way to portray Lombardi’s connection with common citizens from around the state.

“What I do as a scout is to look for a whole variety of options, so I scouted around 10 small towns including Oconomowoc, Jefferson, Whitewater, Elkhorn ...” Langholff said.

The NFL narrowed down that list to their three top choices. Officials liked Oconomowoc’s charm, Jefferson’s river layout and Watertown’s extensive historic downtown, but there was something about Fort Atkinson that really sold them on the local community.

“It was just your quintessential small town — a mix of charm and grit,” Langholff said. “It was authentic.”

Fort Atkinson scenes that made the commercial included one in front of the Powers Tire mechanic shop and a downtown scene in which the Cold Spring building on Main Street is remade into a guitar shop where workers are removing boards from the windows, symbolizing the reopening of businesses across the country.

A shot of Fort HealthCare also made it into the ad, as well as the interior of a home on Sherman Street where a family is shown making dinner.

While the commercial was being shot in Fort Atkinson, crews rented the Creamery building downtown and used that as their “base camp,” Langholff said.

“We parked in the municipal lot, which I remember cruising by as a kid,” he said.

In the process of making the commercial, Langholff said crews also shot some footage of the football fields at Lakeside Lutheran, his own Alma Mater, and Johnson Creek High School, but those scenes did not wind up making the final cut.

Though he no longer lives in the Fort Atkinson community, Langholff said his ties to the area remain extremely strong.

Born in Kansas, Langholff moved to Fort Atkinson before he was a year old, as this community had been his father’s hometown and they had lots of family in the area.

Langholff developed friendships all over the region. He grew up in Fort Atkinson, attended Lakeside Lutheran High School and played sports against other area teams.

In his spare time, he liked to hang out at the cinema where he became a real film aficionado.

His strong interest in sports has persisted, as has his passion for film.

For a while, Langholff worked in New York, and then he returned to Wisconsin to become house manager for the American Players Theatre.

In 2002, he served as location scout for the movie “Reeseville” shot in the Jefferson County area, with Mark Hamill who played Luke Skywalker in “Star Wars” in the lead role.

As a location scout, producer and director, Langholff has done numerous independent films since then, some of which earned regional film awards. He also helped found Wisconsin’s Driftless Film Festival.

And through all this he built up a strong portfolio of commercial jobs.

In recent years, he has worked on major commercial campaigns for Subway, U.S. Cellular and numerous professional sports organizations.

Now working out of Mount Horeb, Milwaukee and Mineral Point, Langholff is the “go-to” location scout for big companies seeking to film commercials across Wisconsin.

He also has done work elsewhere in the U.S. and even internationally, including Africa and South America.

Langholff said he was proud to have been part of this NFL ad and to bring this project to his hometown, but he does have one major regret — that his uncle, Tom Letcher, never got to see it.

Letcher, a Fort Atkinson High School graduate who later moved to the Milwaukee area, passed away on Christmas Eve night.

“Tom was the one I really wanted to see this Super Bowl commercial,” Langholff said. “He knew I was working on it and that we were going to be filming in his sister’s yard in Milwaukee not far from where he and my aunt Candace Letcher (Langholff) lived. His sister is Laura Miller (Letcher,) who’s also from Fort.

“That’s the scene where the kids are playing football in the yard and Vince picks up the ball,” Langholff said.

Langholff noted one other Fort Atkinson connection that came up during the filming of the Super Bowl commercial.

While working on the NFL commercial at Lambeau Field, Langholff noted a familiar name among the photos showcased in the Lambeau Tunnel, that of Fort Atkinson native Evan Siegle who now serves as an official staff photographer for the Green Bay Packers.

Langholff noted that he and Siegle go way back. Though Langholff attended Lakeside Lutheran High School and Siegle attended Fort Atkinson High School, they knew each other through summer American Legion baseball.

“He and I played our final Legion baseball game together at Jones Field in the summer of 1991,” Langholff said.

“Now here I was doing a Super Bowl commercial for the NFL at Lambeau Field and here’s his (Siegle’s) archival photos leading to the Packers Tunnel where we are filming.”

The Fort Atkinson scenes for the Super Bowl commercial took place in December.

It was both heartwarming and strange to return to his hometown, Langholff said.

Mostly, it was wonderful to be back in Fort Atkinson again and to be able to see so many familiar faces and places.

“I saw people I hadn’t seen in 20 years,” he said. “And every time I’d turn around, there would be another memory.

“Like when I introduced myself at Powers Tire — I used to go there as a kid. I said, ‘I’m a Langholff,’ and they said, ‘I won’t hold that against you,’” the Fort native chuckled.

The strangeness came about because of the pandemic, which enforced a certain distance even as Langholff revisited all of these familiar scenes.

“The NFL had really strong pandemic protocols in place,” he said. “Social distancing, masks, testing every three days, meals all individually packed. It made the process extremely different.”

He noted that the pandemic made it even more complex in terms of maintaining all of the regulations dictated by the various unions and professional organizations like the NFL and the NBA.

But the work still had to be done, despite pandemic complications. That, in part, is the message of the commercial itself, in which Lombardi’s message of perseverance echoes through the years.

Here is the link to the NFL spot: https://www.youtube.com/watch?v=SilS_vq4XOw Here is a link…