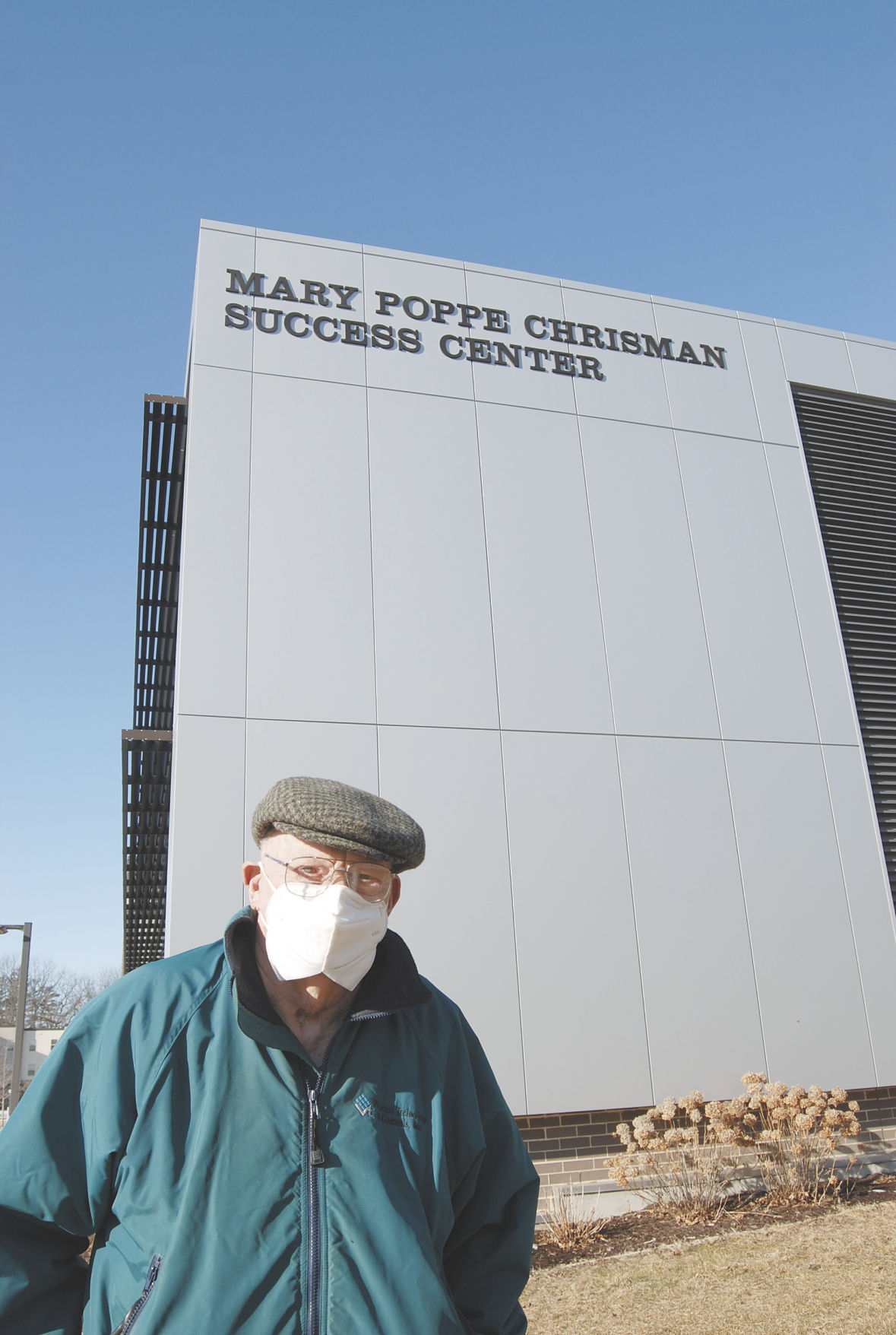 The Dr. Elmer G. Redford ’59 Lab now is up and running, though a formal dedication ceremony has had to be postponed indefinitely until the pandemic has passed. Redford, now 88, has lived in Fort Atkinson since he began teaching at UW-Whitewater in 1966. Left, a page from a University of Wisconsin-Whitewater publication from decades back includes a short bio and photos of Emeritus Professor Elmer Redford. 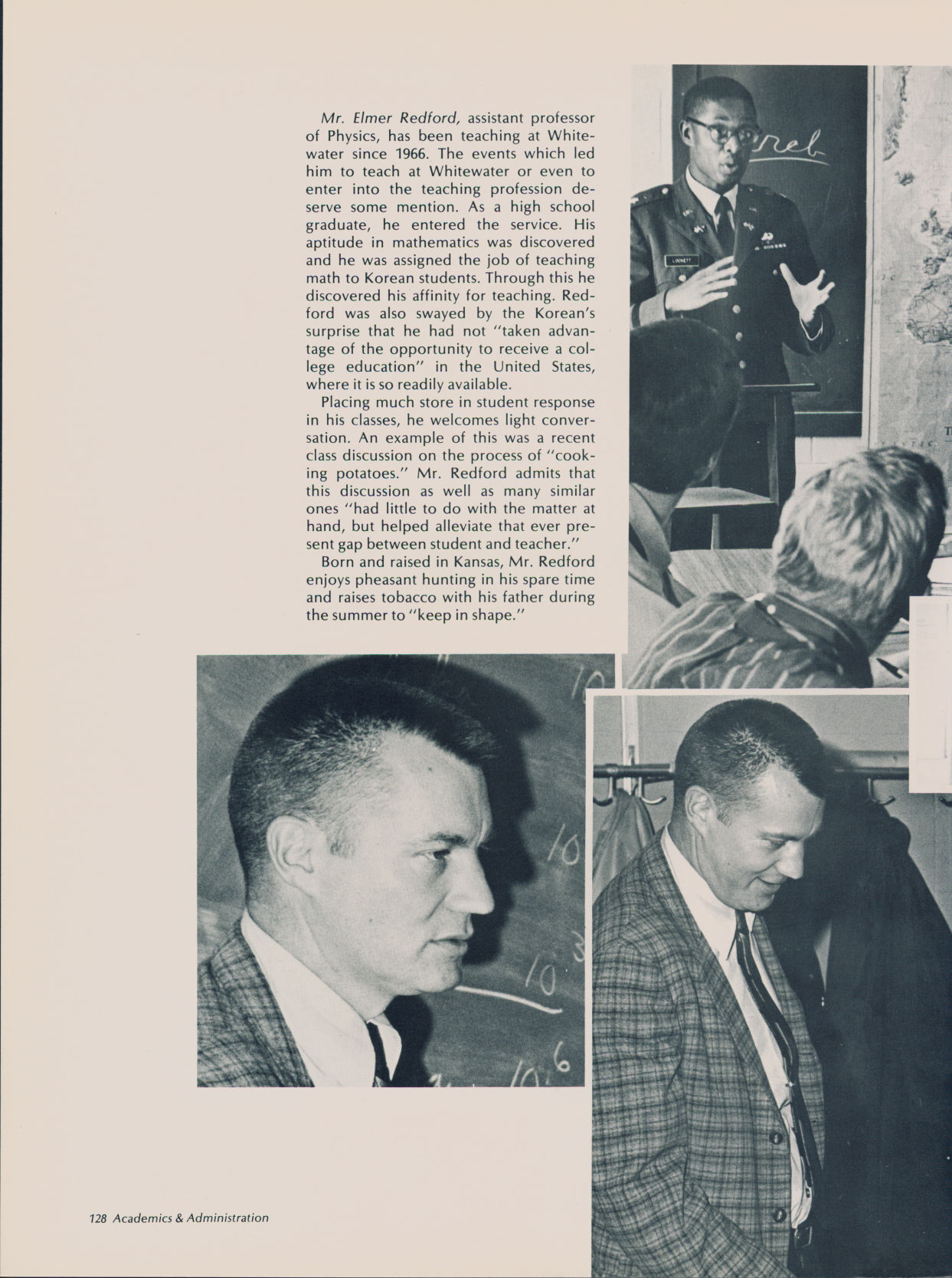 A page from a University of Wisconsin-Whitewater publication from decades back includes a short bio and photos of Emeritus Professor Elmer Redford, Fort Atkinson, who was recently honored by the naming of a lab at the university in his honor. The lab, Dr. Elmer G. Redford ’59 Lab, is is located in the Mary Poppe Chrisman Success Center on the UW-W campus. (Redford is in the bottom two photos.)

The Dr. Elmer G. Redford ’59 Lab now is up and running, though a formal dedication ceremony has had to be postponed indefinitely until the pandemic has passed. Redford, now 88, has lived in Fort Atkinson since he began teaching at UW-Whitewater in 1966. Left, a page from a University of Wisconsin-Whitewater publication from decades back includes a short bio and photos of Emeritus Professor Elmer Redford.

A page from a University of Wisconsin-Whitewater publication from decades back includes a short bio and photos of Emeritus Professor Elmer Redford, Fort Atkinson, who was recently honored by the naming of a lab at the university in his honor. The lab, Dr. Elmer G. Redford ’59 Lab, is is located in the Mary Poppe Chrisman Success Center on the UW-W campus. (Redford is in the bottom two photos.)

WHITEWATER — Many decades ago, a young physics and math teacher took a student under his wing following the death of the student’s father.

That student followed his teacher from junior high to his new post at a local high school and later to the University of Wisconsin-Whitewater, where the teacher became a professor.

This year, in recognition of the incredible impact that teacher had on his life, the former student has donated a significant sum to the UW-Whitewater to have a laboratory named after this influential instructor.

The Dr. Elmer G. Redford ’59 Lab now is up and running, though a formal dedication ceremony has had to be postponed indefinitely until the pandemic has passed.

Redford, now 88, has lived in Fort Atkinson since he began teaching at UW-Whitewater in 1966.

As a faculty member at UW-Whitewater, it’s natural that Redford had more ties with the campus community than his adopted hometown. However, his family is well-known in Fort Atkinson.

His wife, Marjorie Redford, served as a nurse at the Fort Atkinson Memorial Hospital (now Fort HealthCare) for nearly three decades, and all four of the couple’s children — Christopher, Deborah, Rebecca and Steven — graduated from Fort Atkinson High School.

The Fort Atkinson resident and retired professor said he was humbled and honored to be recognized, and “tickled” that he still would be in the thoughts of former students after so long.

The lab now named after Redford is located in the Mary Poppe Chrisman Success Center on the UW-Whitewater campus.

Redford has a long history with UW-W, not only as a professor but also as a student. He studied at the university as an undergraduate after a stint in the military.

“The former student of mine contacted me nearly a month ago to let me know,” said Redford, interviewed by phone earlier this week.

The student, who chose to donate anonymously, was a longtime men-tee of Redford’s who had continued to remain in touch over the years.

“When I first met (the student,) he was in the eighth grade,” Redford said. “His dad had passed away a year before, and I became a kind of a father figure.”

As it happened, the student followed Redford from the West Allis junior high where he began teaching, to the Nathan Hale High School where Redford had the student again as a high school junior, and later to the UW-Whitewater.

As a young member of the UW-W faculty, Redford taught basic algebra and basic physics. He noticed that a number of students were flunking college math and science courses because they had not had the rigorous math preparation they needed to succeed in these classes.

He offered to teach a high school-level algebra class to catch these students up.

“I was accused by a lot of my colleagues at the time of lowering the standards,” Redford recalled.

Alongside this remedial class, he helped to set up a system of peer tutoring to help students over the obstacles in their path.

As time passed, however, it became clear these remedial offerings served as a bridge that allowed students to succeed in their college-level studies.

Eventually, Redford took over the tutorial center and its developmental studies program, hiring other teachers to assist in this role.

Over about a year of planning, unbeknownst to the retired professor, the anonymous donor had worked with the college and with Redford’s family to set up the naming and to organize what was to be a big dedication ceremony.

The donor had contacted all four of Redford’s children, and was planning a big gathering and celebration. However, the coronavirus pandemic got in the way of those plans.

Eventually, it became clear even a small individual reunion was out of the question in 2020, let alone a large public ceremony.

So, the university created a video announcing the dedication of the lab and sent it out by email to all students and others affiliated with the university.

A full dedication ceremony will take place at a later time.

“A former student, an alumnus of UW-Whitewater, made the donation to dedicate the lab in Dr. Redford’s honor in order to recognize the professor’s impact on their life,” said Ben Strand, director of Philanthropy and Alumni Engagement for the UW-Whitewater.

“Dr. Redford was key back in the 1970s and ‘80s in establishing the student success center, developing the peer mentorship program there,” Strand said.

Redford founded what now is the student success center at the UW-W, retiring in 1993 as a professor emeritus.

For much of his career in Whitewater, Redford served as the director of what then was called the Developmental Studies Learning Skills Center.

Greg Rutzen, president of UW-Whitewater Foundation, Inc. and Vice Chancellor for University Advancement, said the newly dedicated room will recognize Redford’s foundational work on behalf of the college and its students.

“Dr. Redford faithfully served for 27 years as a member of the Department of Physics and is highly regarded for mentoring numerous students,” Rutzen said.

The college official said that Redford was instrumental in leading the development and growth of the tutorial service at UW-W.

“His vision laid the foundation for a tutoring program focused on student needs and leveraging the talents of peer mentors, faculty and counselors,” Rutzen said.

“Dr. Redford also was a long-term stakeholder and supporter of the R. W. Prucha Scholarship Fund,” the official said. “Additionally, he participated in the shared governance of the university as a member of the faculty senate.”

The Mary Poppe Chrisman Student Success Center is the home to the UW-Whitewater Campus Tutorial Services, which still is active despite the pandemic.

Rutzen noted that during the current crisis, staff and student tutors have shown remarkable flexibility in continuing their services via remote learning, in adherence with pandemic safety protocols on the UW-Whitewater campus.

“The technology in the Mary Poppe Chrisman Success Center has proven to be an impactful resource for students who are now not only struggling with classwork, but also unable to meet physically with staff and tutors for assistance,” Rutzen said.

“Luckily, the Campus Tutorial Services had been proactive early to implement digital options for the delivery of tutorial services,” he said.

The official noted that for the summer, fall and spring 2019-20 semesters, 188 student workers (summer/fall) and 149 student workers (spring) assisted their fellow students at the center. Tutors delivered 66,245 hours of services during the academic year.

When he was drafted into the service in 1952, he was stationed at Fort Sill, Okla., where he was informed he’d be training other young artillery soldiers in the math they needed to do their jobs.

“My math scores were so high, they decided I would be teaching math,” Redford said.

He recalls thinking, “I can’t do this.”

Then he thought back to one of his own influential teachers, Mrs. Moore, who had forced her students to do public speaking.

Redford remembered hating it, and challenging the teacher as to why that was necessary, as public speaking made him nervous.

She replied, “You will always be nervous, but you’ll learn to cope with it.”

He found that to be true as he began training artillery personnel in the United States and later in Korea, where he helped oversee the 38th parallel.

In Korea, Redford had to teach a class of Koreans, assisted by a North Korean interpreter who had fought his way to South Korea to support the cause. He recalled that his 33 students had to share 11 books, studying on rice mats.

It was Redford’s North Korean assistant who first challenged the young soldier’s education plans. He could not understand how Redford could pass up a college education, living as he did in the land of opportunity.

College just never had been on Redford’s radar. He always had expected to farm or do some kind of blue-collar labor.

But as he finished his stint in the service, he decided to try college after all. By this time, his father had bought a farm in the Cambridge area, so Redford wound up in Wisconsin.

He initially enrolled at the UW-Madison, but found it not to his liking. Switching to UW-Whitewater, he found the smaller campus a better fit.

At UW-W, he met Professor Prucha, who became a mentor as Redford went through college and later joined the UW-W faculty.

“He was probably one of the finest guys I ever met,” Redford remarked. “There’s now a scholarship in his name.”

It was these relationships that led Redford to enter the field of teaching, to be able to give back some of what he had received.

“People go into teaching to bring out the best in their students,” Redford said. “Looking back, that’s the most important thing.”

No one goes into teaching — be it at the elementary/secondary or collegiate level — to make big bucks, he noted. They do it to help others, and the biggest rewards come sometimes years later when that impact is recognized.

Redford said he has taken pride in the successes of all of his students. Some, like the former student who donated to name the lab in Redford’s honor, made it big in business. Others, like his former student Pat Slane, who now oversees a space telescope, have made major contributions to science and/or education.

“I got a phone call last year from a student I had back at Nathan Hale,” Redford said. “That’s the real reward of the job, knowing you made a difference in students’ lives.”