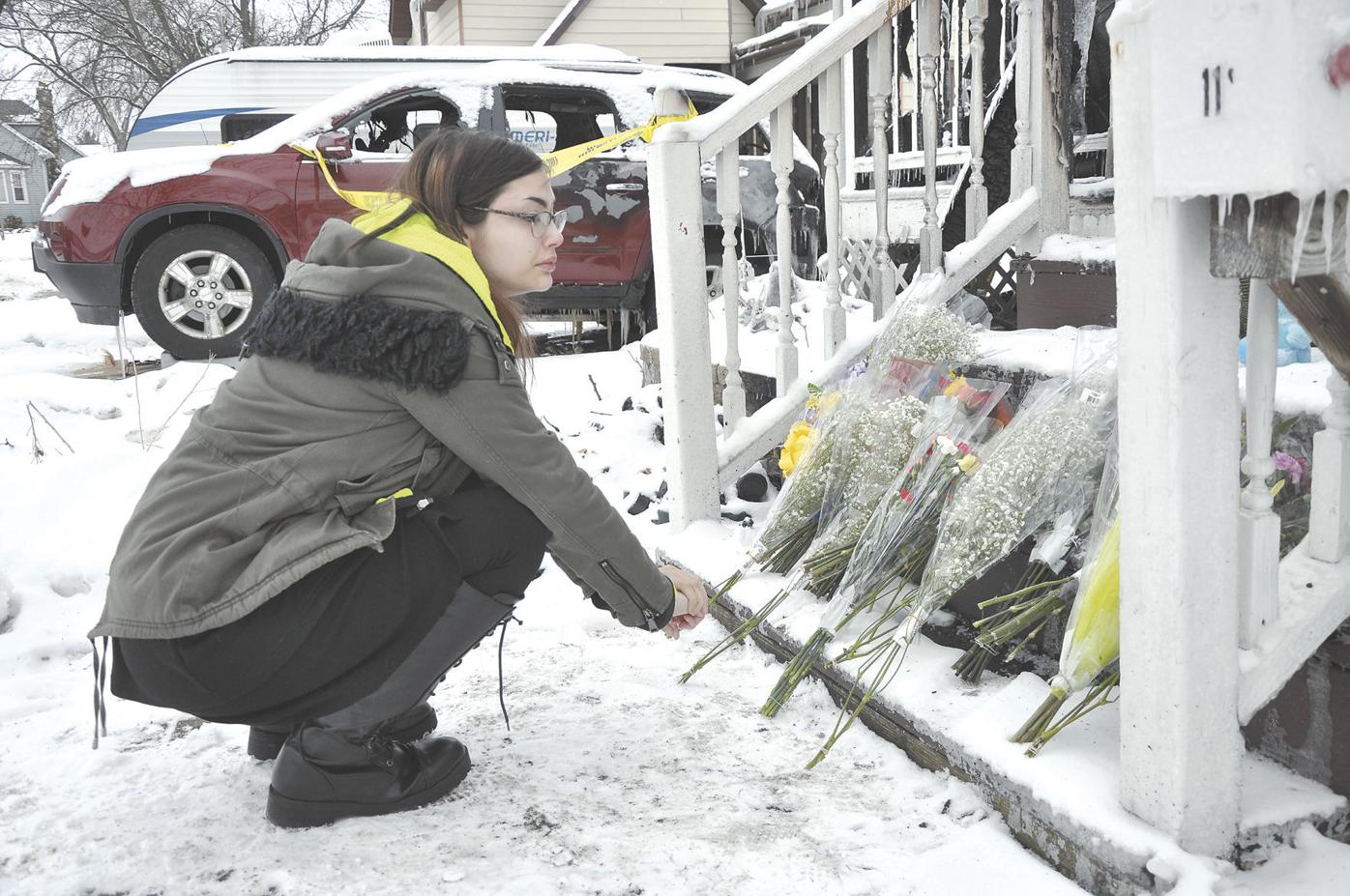 Above, Aliyah Noh of Fort Atkinson, whose sister Nevena was close friends with Bryan Palacios, 14, who perished in a house fire early Saturday morning, places a bouquet of flowers at the steps leading to the front porch of the charred house in honor of both Bryan and his nephew, Ethan Graciano, who also died in the fire. Middle, the charred remains of the house, owned by the Palacios-Perez family in the 400 block of Milo Street in Fort Atkinson. Left, Jaime Zuniga-Cortes, right, and Bryan Palacios from Fort Atkinson. 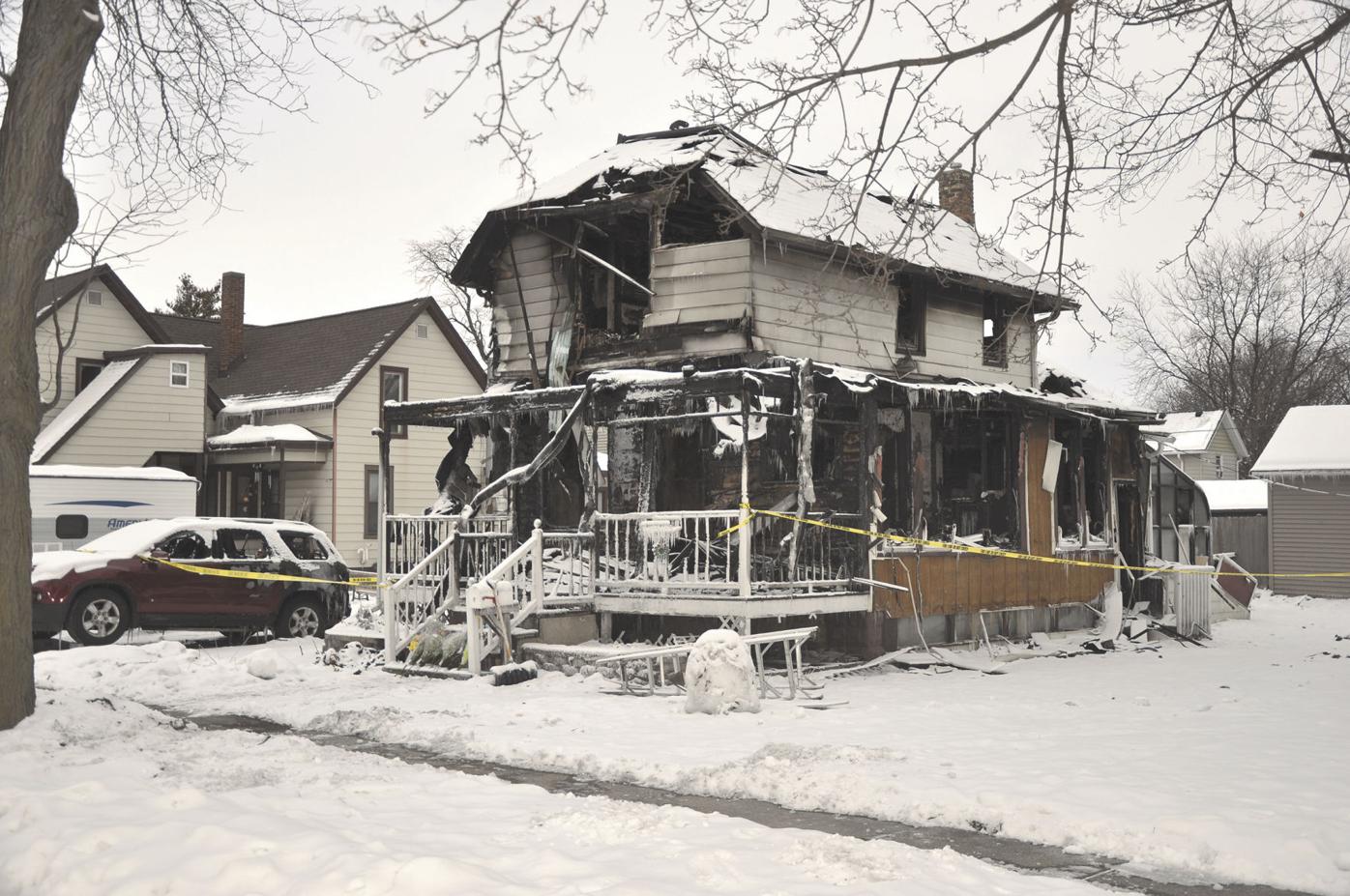 Above is the charred remains of the house, owned by the Palacios-Perez family in the 400 block of Milo Street in Fort Atkinson, that was destroyed by fire early Saturday morning. 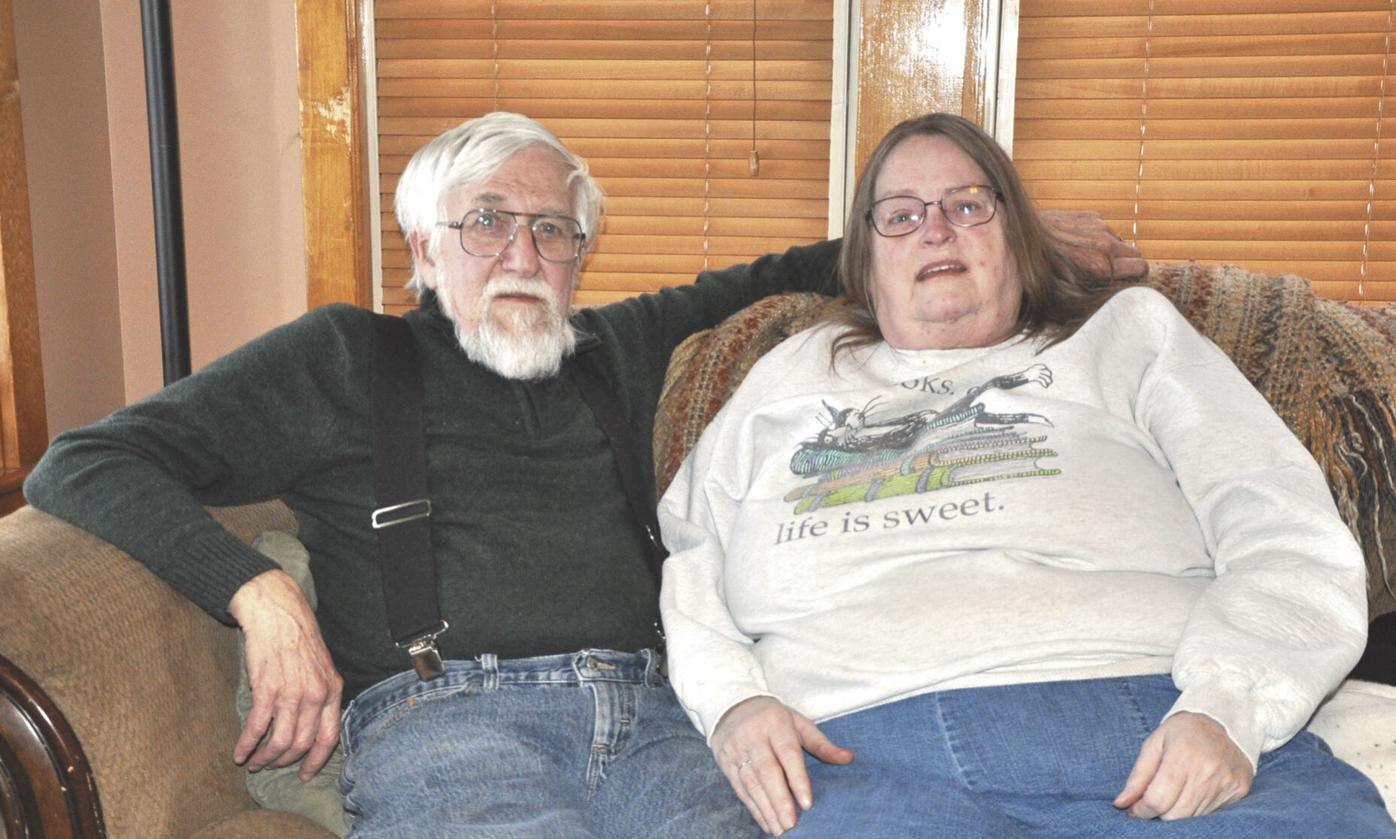 Above, next-door neighbors, Dave and Patricia “Pat” Frigo, of 409 Milo St., characterized the deaths of two children in a house fire Saturday as “a loss to the community and the neighborhood.” The couple thanked the community for its outpouring of support, and also the firefighters for their efforts to contain and extinguish the blaze. 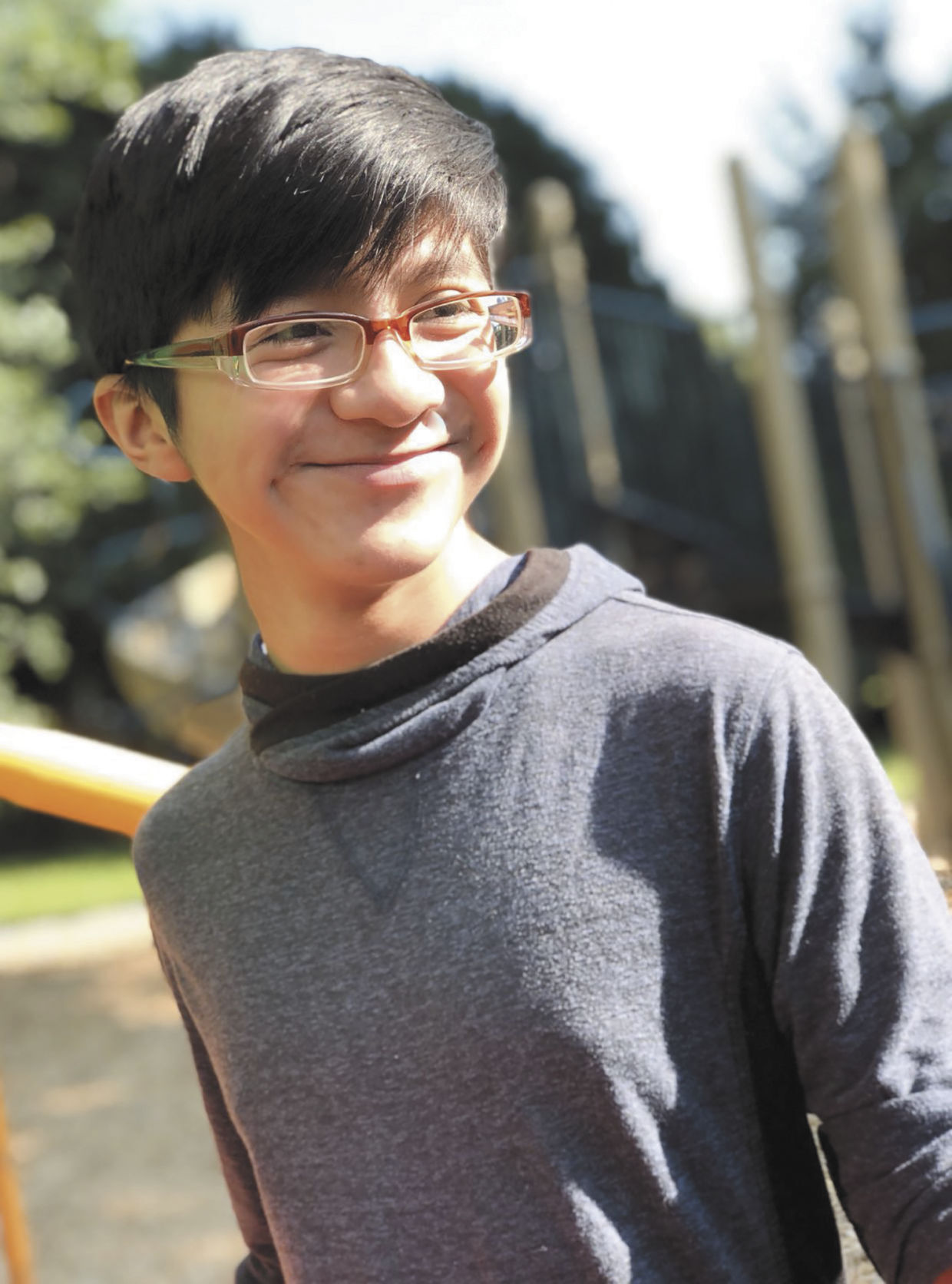 Above, Aliyah Noh of Fort Atkinson, whose sister Nevena was close friends with Bryan Palacios, 14, who perished in a house fire early Saturday morning, places a bouquet of flowers at the steps leading to the front porch of the charred house in honor of both Bryan and his nephew, Ethan Graciano, who also died in the fire. Middle, the charred remains of the house, owned by the Palacios-Perez family in the 400 block of Milo Street in Fort Atkinson. Left, Jaime Zuniga-Cortes, right, and Bryan Palacios from Fort Atkinson.

Above is the charred remains of the house, owned by the Palacios-Perez family in the 400 block of Milo Street in Fort Atkinson, that was destroyed by fire early Saturday morning.

Above, next-door neighbors, Dave and Patricia “Pat” Frigo, of 409 Milo St., characterized the deaths of two children in a house fire Saturday as “a loss to the community and the neighborhood.” The couple thanked the community for its outpouring of support, and also the firefighters for their efforts to contain and extinguish the blaze.

They were riding their skateboards, like they often did. Laughing and joking with each other, having been best friends since pre-school.

It was a Friday night, and Jaime Zuniga-Cortes and Bryan Palacios were having fun, making plans to hang out for the weekend with a few friends, go skateboarding around Fort Atkinson. Something they often did for the last decade.

“If Bryan wasn’t over here, then Jaime was over there,” said Carly Cortes, Jaime’s mother.

The two often talked about classes they were taking and what they were excited for coming up.

“He is the nicest person I’ve ever met,” Jaime said about his friend.

Early on Saturday morning, Carly was looking through Facebook posts and had seen a local group chat wondering where all the smoke was coming from along Milo Street.

She clicked on the comments and soon realized something wasn’t right.

But there was no answer.

“His phone is going to voicemail, and he is not answering and I’m worried,” Jaime told her.

The two got into a vehicle and headed to the street they have been on so many times.

They saw where the smoke had come from as firefighters battled the blaze. The house where Bryan lived had caught on fire early that morning.

“I parked a block way, and I asked if everyone got out,” Carly said. “A neighbor told me the parents got out, but Bryan did not.”

Both Bryan, who is 14, and his 4-year-old nephew Ethan whom he was trying to save from the fire, died in the blaze.

They were joking and having fun only hours earlier.

“He was an amazing kid,” Carly said. “He always had a smile on his face. He was joking and always trying to make everyone smile.”

For those who never got to meet Bryan and experience his great personality, there is one thing that Jaime wants everyone to know about him.

Bringing flowers to others

Aliyah Noh placed fresh-cut flowers on the front steps Monday afternoon, where others already had placed candles and teddy bears in tribute.

Her sister, Nevena, was close friends with Bryan.

“It’s been really sad, very tragic,” Noh said, her eyes tearing up. “He (Bryan) was way too young; he was a really, really sweet boy. He used to call my sister up so they could go buy flowers and give them out to random people in the community. So, I just wanted to bring flowers to him.”

Next-door neighbors to the family, like people across the City of Fort Atkinson, are mourning the crushing loss.

The Fort Atkinson Fire Department received a call concerning a structure fire in the 400 block of Milo Street at 3:23 a.m. on Saturday, according to a post on the department’s Facebook page. Firefighters arrived in less than four minutes and found the two-story home with heavy fire throughout.

“It’s just a loss to the community and to the neighborhood,” said next-door neighbors Dave and Patricia “Pat” Frigo, of 409 Milo St., on Monday.

The couple awoke early Saturday morning to find the house next door engulfed in flames.

Saturday morning, when she awoke at 4 a.m., Pat said she saw “white lights and heard voices,” and thought perhaps Fort Atkinson Police had stopped someone. Their son, Tyler, who works night shift, was off work that evening and awoke downstairs. Nobody came to ring their doorbell to alert them.

“When I came downstairs to see what was going on, Tyler said, ‘The neighbor’s house is on fire,’” Pat said, noting by that point there were five or six firetrucks on the street. “You could see then the fire was coming through the roof.”

“The dad said he opened the front door to try and alleviate some of the smoke and ran outside to see if he could find help, which he didn’t. He then ran back in; at that time, his wife had arrived home from work,” Carly said. “By then, he couldn’t get back out the front door.”

Carly said Bryan’s mother found a small ladder and set it up to the window. Bryan’s father climbed out, fell to the ground and told Bryan to hand him Ethan, that he would catch him.

“There was a gulf of flames that scared Bryan, so he jumped back and (his father) didn’t see Bryan or Ethan after that,” Carly said.

In addition to Fort Atkinson, a number of area fire departments including Jefferson and Lake Mills, as well as EMS and other public safety agencies responded to the scene.

Dave Frigo described the blaze as “very intense,” adding the entire house — the front, the back, everything — was in flames.”

“It wasn’t like one part of the house was burning — it (fire) was everywhere in the house,” Pat added.

After waking, Dave immediately went outside and asked one of the firefighters if everyone in the house got out safely. “And he (firefighter) said he didn’t know,” Dave said.

The neighbor described seeing the house on fire as “surreal.”

“You are watching it burn and you know there’s absolutely nothing you can do about it,” Dave said. “It’s heartbreaking.”

Pat said the father apparently smelled smoke and scaled a ladder to an upstairs window to break the glass in an attempt to rescue the two boys. She said the impression was that Bryan was making a valiant attempt to save his nephew.

“But the flames shot up and Bryan stepped back,” Dave said.

“And that’s the last they (parents) saw of him,” Pat added. “He (Bryan) was trying to get to the window.”

Pat Frigo commended both the Fort Atkinson Fire Department and other responding departments for their tireless efforts at helping contain and extinguish the blaze.

“The fire department was outstanding,” she said, noting firefighters remained at the scene until 2 that afternoon when the last person cleared out.

“It took awhile before they got all the (flames) extinguished,” Dave said, noting that the fire was intense. “The neighbor lady on the other side said that, when she got up, she put her hand on her window and the window was hot. So, there must have been a lot of heat going that way.”

The fire department also was extracting water from the basement that had been pumped in, Pat said, noting that city crews spread salt and sand on the sidewalk since the water was freezing solid.

Cause of the fire remains under investigation by the state fire marshal’s office.

Dave observed that since the firetrucks left Saturday afternoon, there’s been a steady progression of motorists passing by and people placing flowers on the steps leading up to the porch.

He characterized the deaths of the two young boys as “a great loss” for the community.

Although she didn’t know them real well, Pat described the homeowners, who are staying with family now, as “very nice people, salt of the earth.”

As Pat would return home from work, she said they just would be leaving for work “and we’d wave to each other. But they were always friendly.”

Bryan, she said, was a very well-mannered young man.

“If you’d engage him in a conversation, he’d always talk to you,” Dave added.

Pat said that if an errant ball strayed into their backyard, Bryan always would come and ask permission to retrieve it first.

“He wasn’t the kind that was just hooked into video games — he’d be outdoors with a soccer ball and stuff, and playing with the young ones,” she said.

One thing that makes Pat “heartsick,” she said, is how the father was “hardworking and perpetually working on the house — there was always a project going. I could see him going along the edge of the house picking out grass and sweeping the sidewalk. Who does that? Very meticulous.

“And she (mother) would have 12 to 15 plants just hanging on that porch every summer,” she added. “So much pride and so much time and work into it (their place).”

Moreover, Pat pointed out that the father was always willing to “go out of his way” to shovel another neighbor’s sidewalk or mow their grass.”

As of 6 p.m. Monday, a total of $46,476 in donations have been made to a GoFundMe page fundraiser organized Saturday by Carly Salazar. To donate, visit www.gofundme.com/f/help-the-palaciosperez-family.

St. Vincent de Paul, 1525 Summit Ave., also has announced through social media that it is accepting items for the family, including cash donations. Persons interested in supporting the family through St. Vincent can learn more about drop-off times on the nonprofit’s website: http://www.svdpfort.com.

The outpouring of community support “just has touched everybody’s heart,” Pat said. “Everybody wants to help any way they can.

“I’m heartened that the community is rallying around (the family),” she added, tears flowing. “These were very decent, hard-working people — wonderful neighbors.”