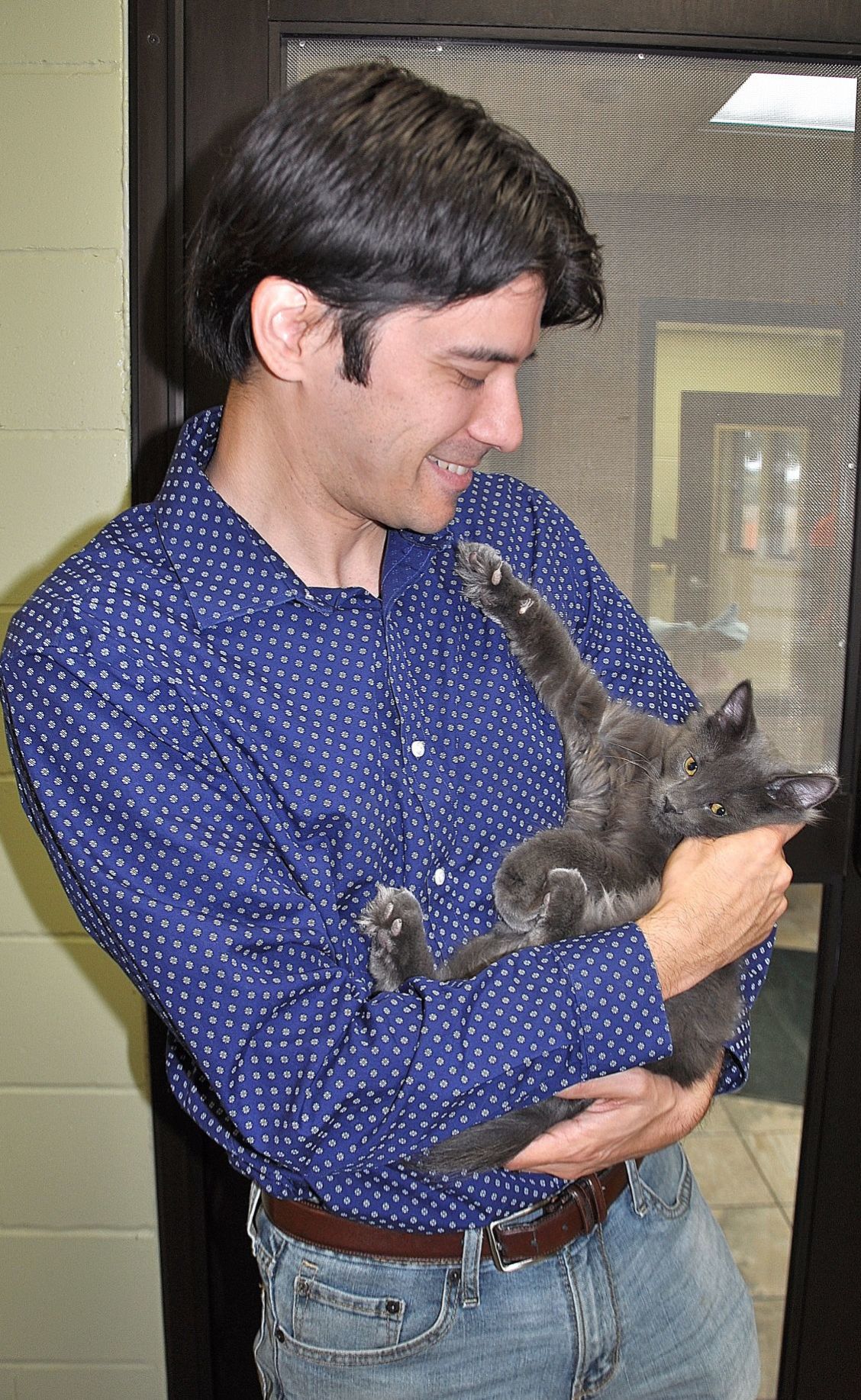 Jeff Okazaki, the new executive director of the Humane Society of Jefferson County, interacts with one of the shelter’s juvenile cats. 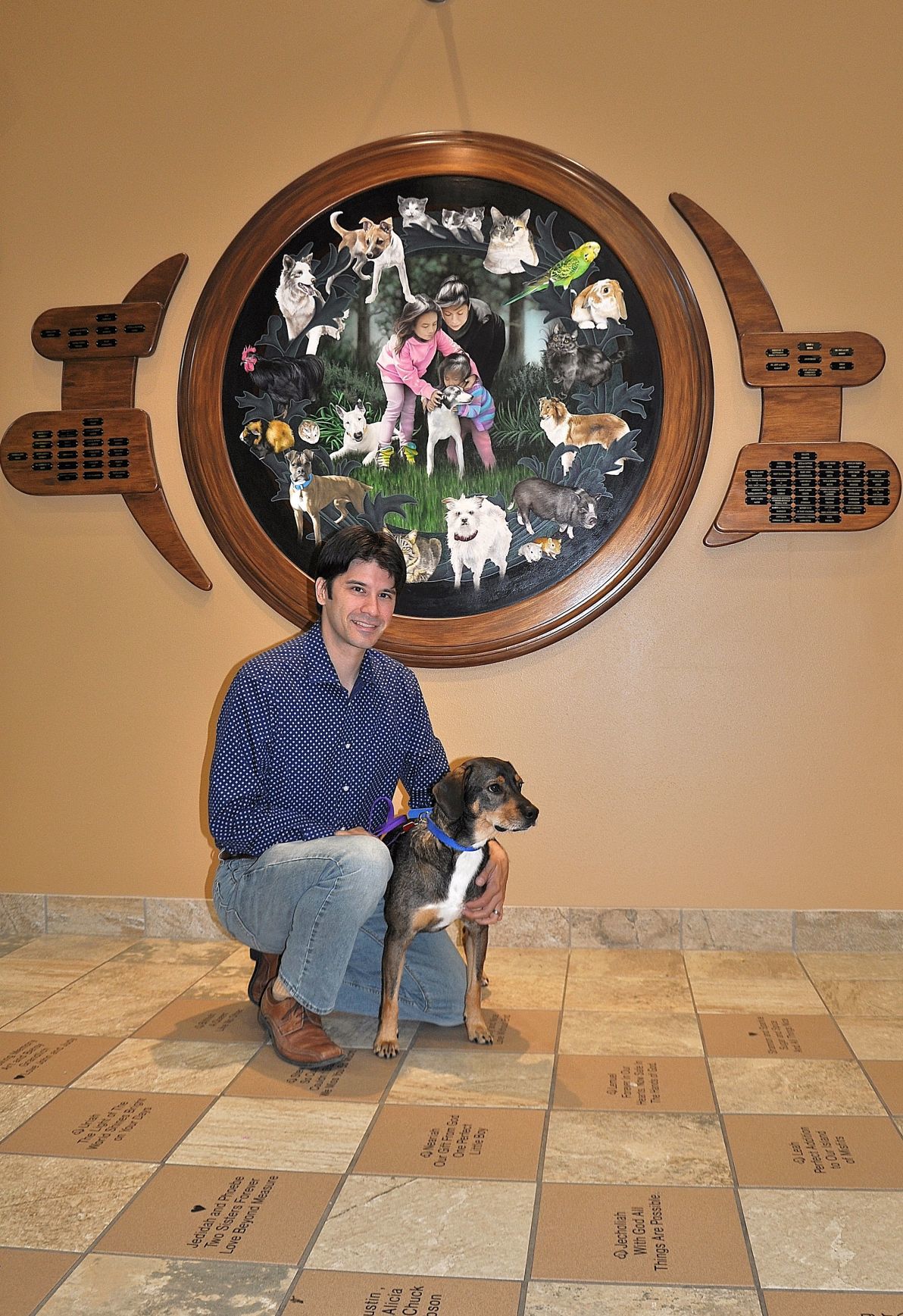 Jeff Okazaki, who recently stepped in as the new executive director of the Humane Society of Jefferson County, poses inside the society’s animal shelter with adoptable dog M.G.

Jeff Okazaki, the new executive director of the Humane Society of Jefferson County, interacts with one of the shelter’s juvenile cats.

Jeff Okazaki, who recently stepped in as the new executive director of the Humane Society of Jefferson County, poses inside the society’s animal shelter with adoptable dog M.G.

JEFFERSON — Jeff Okazaki brings a love of animals, a strong background in nonprofit work and a sound fiscal foundation as he takes over the helm of the Humane Society of Jefferson County.

Okazaki, originally from the Chicago area, moved to Madison a couple of years ago to be closer to his wife’s family.

In August, he got his feet wet at the Humane Society of Jefferson County, and in September he officially took over the role as the humane society’s executive director following the retirement of longtime director Lisa Patefield.

has pretty much always has been involved with nonprofit organizations. Both of his parents ran nonprofits when he was growing up and he spent two decades working in public service and the nonprofit sector, for state and federal elected officials from both major political parties.

He has been involved in a wide range of legislative issues, including the closure of the last horse meat-processing plant in the United States.

He also spent seven years working for one of the largest nonprofit hospices in Illinois, serving as director of communications and overseeing the organization’s business data management.

Okazaki grew up in the northwestern suburbs of Chicago and subsequently attended Bradley University in Peoria, Ill., studying public relations and political science as an undergraduate and then going on to pursue an Master of Business Administration degree, with a focus on economics.

Before coming to the Humane Society of Jefferson County, Okazaki worked for a small nonprofit dental clinic in Madison called “More Smiles Wisconsin.”

He said that before he came on board, the dental clinic had gone through some hard times.

Okazaki was the clinic’s fourth executive director in just a few years. It needed to downsize and refocus its mission so it could continue serving low-income and homeless persons from throughout the region, those earning $25,000 or less a year and those on Medicaid.

“We had a pool of about 90,000 eligible people in the Dane County area, plus some who came in from outside the county,” Okazaki said.

With the help of the clinic’s dedicated board, Okazaki said, he was able to right the ship so that the clinic could focus on the “deeply needed care” it provided to local residents.

At the Humane Society of Jefferson County, Okazaki steps into a much different situation, as the shelter is a well-oiled machine with strong community support, a great staff, and an outgoing director who has built a thriving program, he said.

“Though she retired in the first week of August, Lisa still does some consulting with us, so we are not losing her vast expertise and organizational skill,” Okazaki said.

Although he had not worked with a humane society before, Okazaki said he grew up with animals and is a loving dog owner.

As a child, he helped rescue local box turtles and snapping turtles from an adjacent bird sanctuary. He also helped to train his family’s German Shepherd dogs.

Okazaki and his wife, Grace, have a rescue dog, Tucker, a Labrador/Flat Coated Retriever mix, and a cockatiel named Opie.

He said he loves being able to bring his dog to work periodically in his new position with the humane society.

“It has been fantastic,” he said.

Okazaki said the transfer of leadership at the Jefferson County shelter has been very smooth, aided by extremely competent employees, board members, volunteers and, of course, the outgoing leadership of Patefield and of recently retired community outreach director Sara Lastusky.

“That level of stability and dedication is great to see,” Okazaki said.

The new director said he has visited animal shelters in a number of different communities and he is very impressed with the Jefferson County facility, both in terms of the building itself and how it is run.

“This is a high-quality shelter with great involvement and support from the local community,” he said. “We are able to draw on some great resources in order to grow and sustain our work. That speaks volumes about our community and I am really excited to be a part of that,” Okazaki said.

Currently, Okazaki, his staff and volunteers are working on several upcoming events.

First up is the humane society’s annual fundraiser, the Fur Ball, which will take place Saturday, Oct. 19.

On Oct. 31, the humane society’s shelter will host its trick-or-treat activity for youngsters, the “Howloween Party.”

“All of the components that have made us successful, I want to keep them going and build on that support,” Okazaki said.

Looking down the road, Okazaki said he is excited about the idea of working with emergency planners on the county level to assure that in the case of a mass evacuation or other large-scale disaster, area pets would be cared for.

He said the humane society’s shelter does have room to house a large number of animals in case of an emergency.

“We have reached out to Jefferson County Emergency Services,” Okazaki said. “Seventy percent of households have pets, so the vast majority of the people who live in the county would be affected if something like that does happen.

“If we could be involved in future emergency planning, that’d be great,” he said. “We would really like to help people prepare and help local pets to be safe.”

Another long-term goal would be getting solar energy for the shelter, which would significantly reduce the society’s electric bill, be more environmentally friendly and also help provide an backup system to keep things running in case of an emergency.