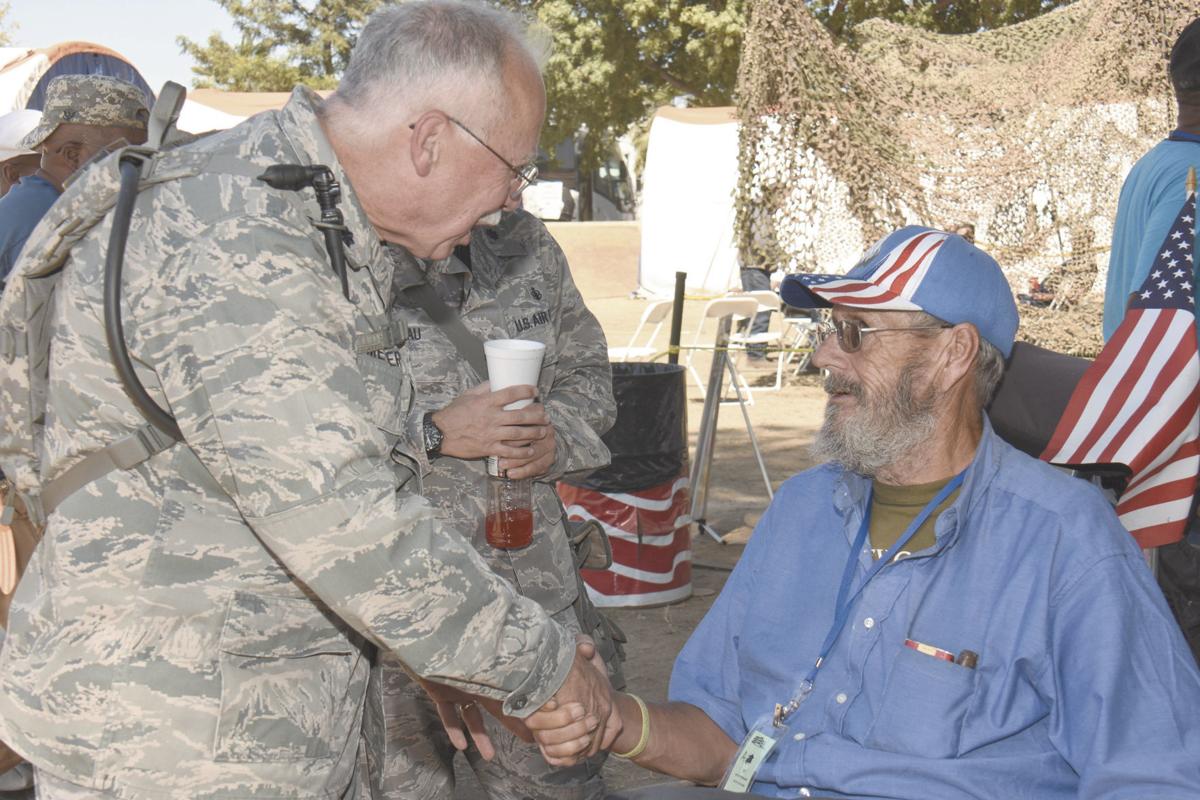 Col. Brad Meyers, left, now is in command of the medical group for the Wisconsin Air National Guard’s 115th Fighter Wing in Madison. 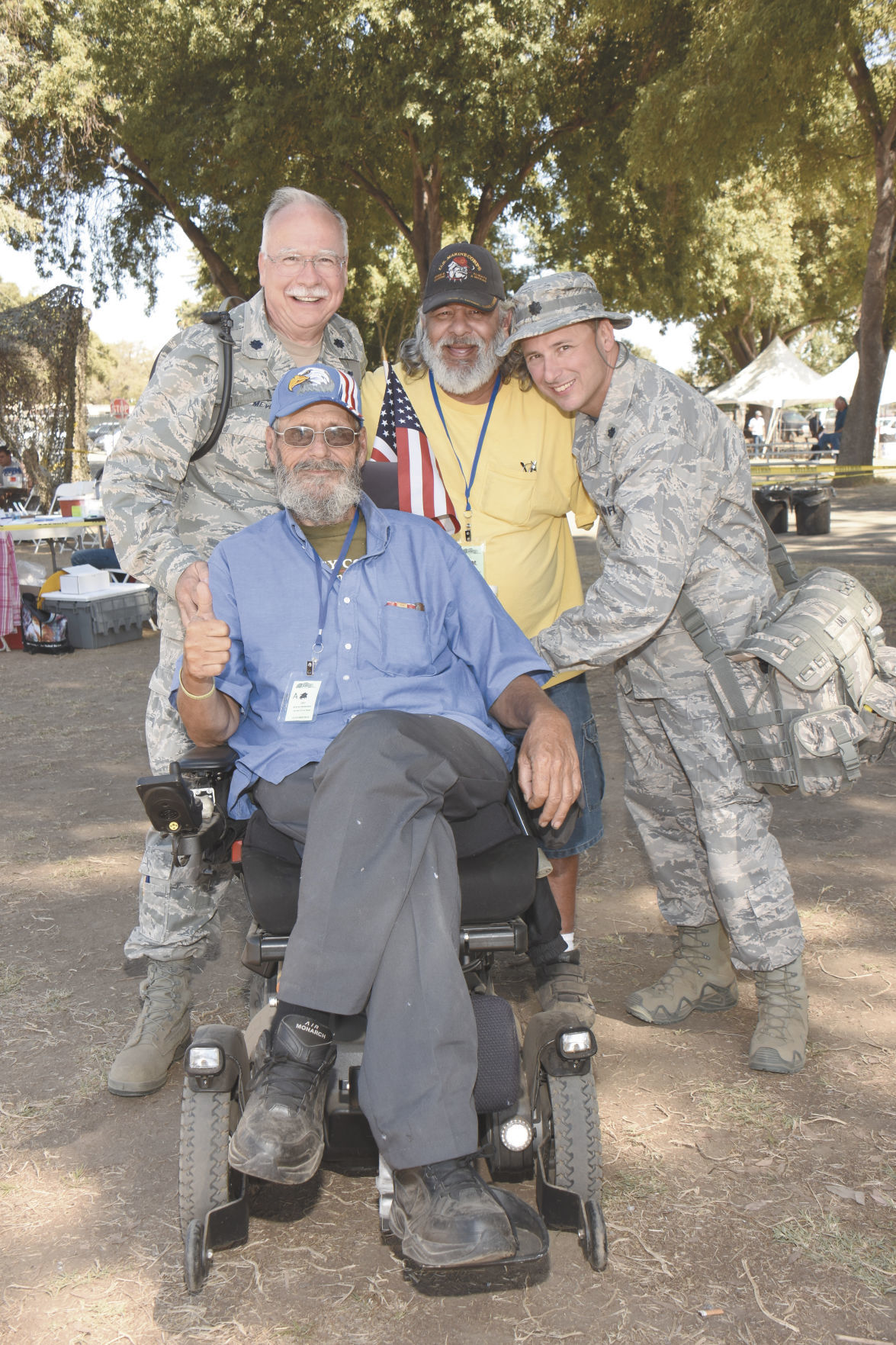 Col. Brad Meyers, Jefferson, shown above standing at left, is in command of the medical group for the Wisconsin Air National Guard’s 115th Fighter Wing in Madison.

Col. Brad Meyers, left, now is in command of the medical group for the Wisconsin Air National Guard’s 115th Fighter Wing in Madison.

Col. Brad Meyers, Jefferson, shown above standing at left, is in command of the medical group for the Wisconsin Air National Guard’s 115th Fighter Wing in Madison.

JEFFERSON — Brad Meyers remembers when his grandfather would chase steam engines to get a glimpse — and a picture — of an era when the powerful iron horses used to roll down the tracks.

But when that era faded, his grandfather soon turned to capturing pictures of airplanes — and brought his grandson with him to help spot the crafts about to land.

“We had some really good times doing that,” the former Jefferson physician said.

Meyers became so in tune with the hobby he could identify what type of airplane it was a few miles out.

And by the time he went to medical school in 1977, he had to find a way to pay for the education.

“I liked airplanes, so maybe I will join the Air Force,” he said of his thinking at the time.

After getting his degree to be a doctor, Meyers spent four years in the military serving on a medical base in Kansas. When he turned to private practice, he moved with his wife, Gretchen Geist, now a family nurse practitioner, to Jefferson, where they worked together for 20 years at the Rockwood Family Health Clinic.

But in 2011, Meyers found himself with a military opportunity once again — joining the medical team at the Wisconsin Air National Guard’s 115th Fighter Wing in Madison. And last month, now-Col. Meyers took command of the medical group.

The opportunity is humbling.

“Kind of a dream come true,” he said.

To balance his new title and still have a civilian practice, now in Waterloo, Meyers said he has a great team of skilled individuals with whom he works at the 115th Fighter Wing.

“The medical group is special to me. We have really great people who will help me make these next few years really special,” he said.

One of the big changes the fighter wing is facing is the possible switch from the F-16s fighter jets to the new F35 aircraft.

“We are still waiting to see if we will be selected,” he said. “We are optimistic we will.”

The issue of bringing the new aircraft to Madison has been a long one for area residents who have been studying the impact the new jets will have on the sound and on groundwater if a new facility is built. Meyers said he believes Madison could be selected in the next few months.

The 115th Fighter Wing is a unit that has an alert role, with fighters ready to go in the air at all times.

And if the base is picked to be home to the new fighter jets, the medical team also has a role in serving those pilots and looking at what challenges the changeover would have from a medical perspective.

Part of what the 115th Fighter Wing in Madison does in terms of the medical team not only involves evaluations of the 1,500 troops at the base, but also trains to go to regions that might have been affected by things like a natural disaster and needs to help a large number of people in a short amount of time.

Meyers said that many of the doctors who work on the base have experience working in an emergency room. There also is training in larger cities that focus on such things as gunshot wounds.

With the Air Force paying for Meyers’ education and giving him his first job as a doctor, he said, he believes in giving back and continuing his military service.

Meyers is married to Gretchen Geist, a family nurse practitioner who volunteers 20-plus hours a week caring for those with diabetes and other illnesses.

His daughter, Elise, also is joining the medical industry and is in the family medicine field, and his son, Cedric, is an electrical engineer.

Meyers earned his medical degree at the Vanderbilt University School of Medicine in Nashville, Tenn., and completed his residency in family medicine at the Medical University of South Carolina-Charleston.

He then embarked on four years of active duty, in 1984 being assigned to McConnell Air Force Base in Wichita, Kansas. There, Meyers served as chief of aerospace medicine and chief of the medical staff, which worked with pilots flying the B-1B strategic bomber, the KC-135R aerial refueler and F4 Air Guard fighter jets. At one point, he served as a flight surgeon.

By 1988, he was out of the military and decided to make a move from the St. Louis area, where he grew up, to Wisconsin. Although his wife was from Nashville, the couple settled in Jefferson, where they opened their practice, and where they still live today.

He said the family likes to travel and the location in the state was perfect.

Rockwood Family Health opened in 1988 as an independent practice, then continued operation under the umbrella of Fort HealthCare in 2008. He joined the SSM Health team in 2014, continuing to work in the county.

When he decided to get out of the family business, Meyers soon looked to the 115th Fighter Wing that had an exciting opportunity with a deployable forward emergency unit. He joined the Air National Guard in 2011 at the age of 56.

One of the exciting parts of this promotion is the challenge to balance his private practice with a military job, Meyers said.

While he gets to be around jets during his time on the base, Meyers said, he does not have his own pilot’s license — although he still is fascinated by airplanes.

To be a good pilot, he said, you need to fly as much as you can to learn, something that requires more time than he has with a busy schedule.

For those looking at the military as a way to gain an education and a career, Meyers encourages people to do so.

The men and women he works with are all there because they want to be, he said, and they also have a civilian career.

“I would encourage people who have any interest in the military to look at the Air National Guard,” he said. “It really is a good educational opportunity.”

In his free time, Meyers said,his fascination with airplanes and the “wild blue yonder” leads him each summer to Oshkosh during the EAA AirVenture to see the planes from another era that once decorated the sky.