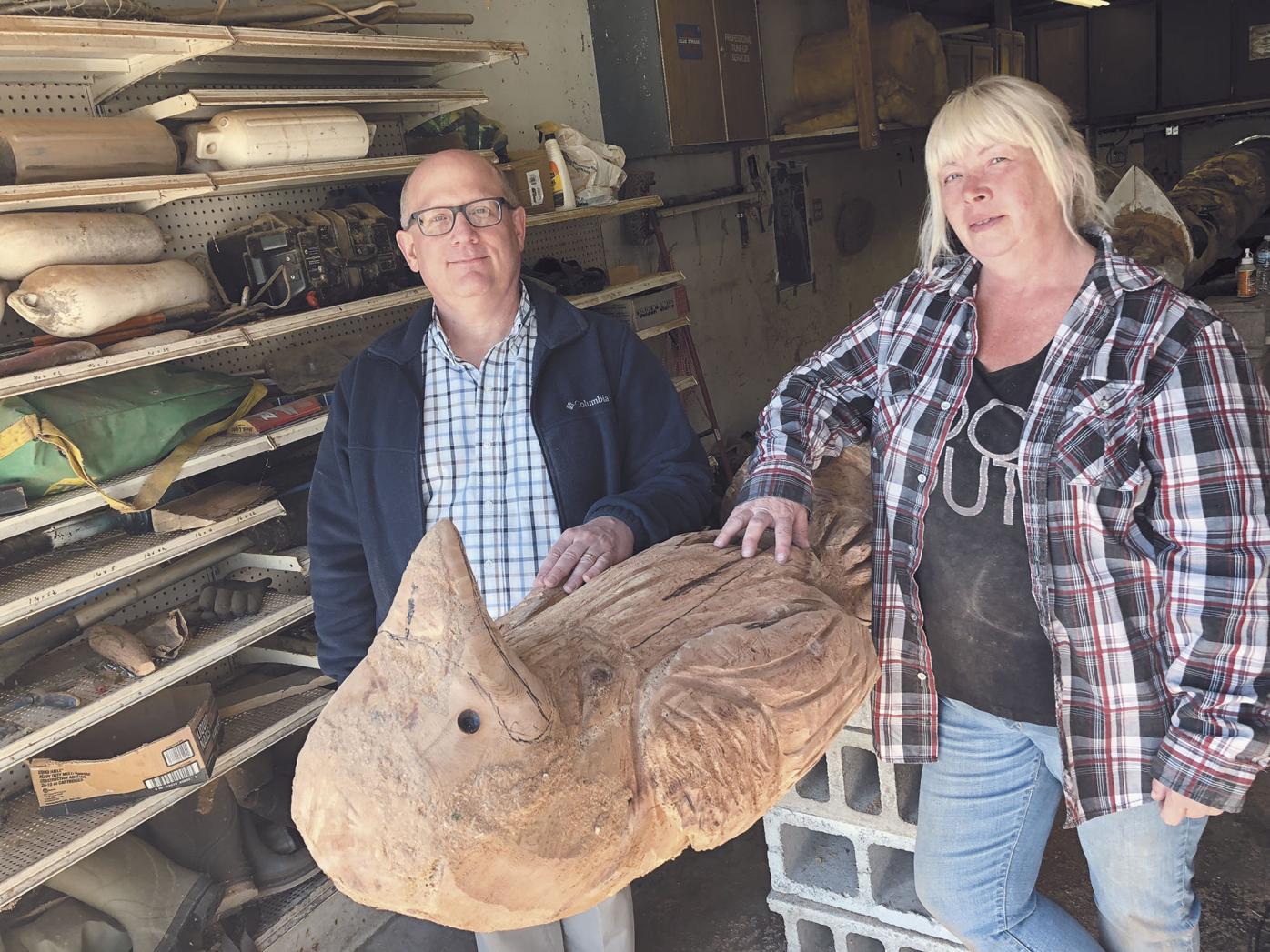 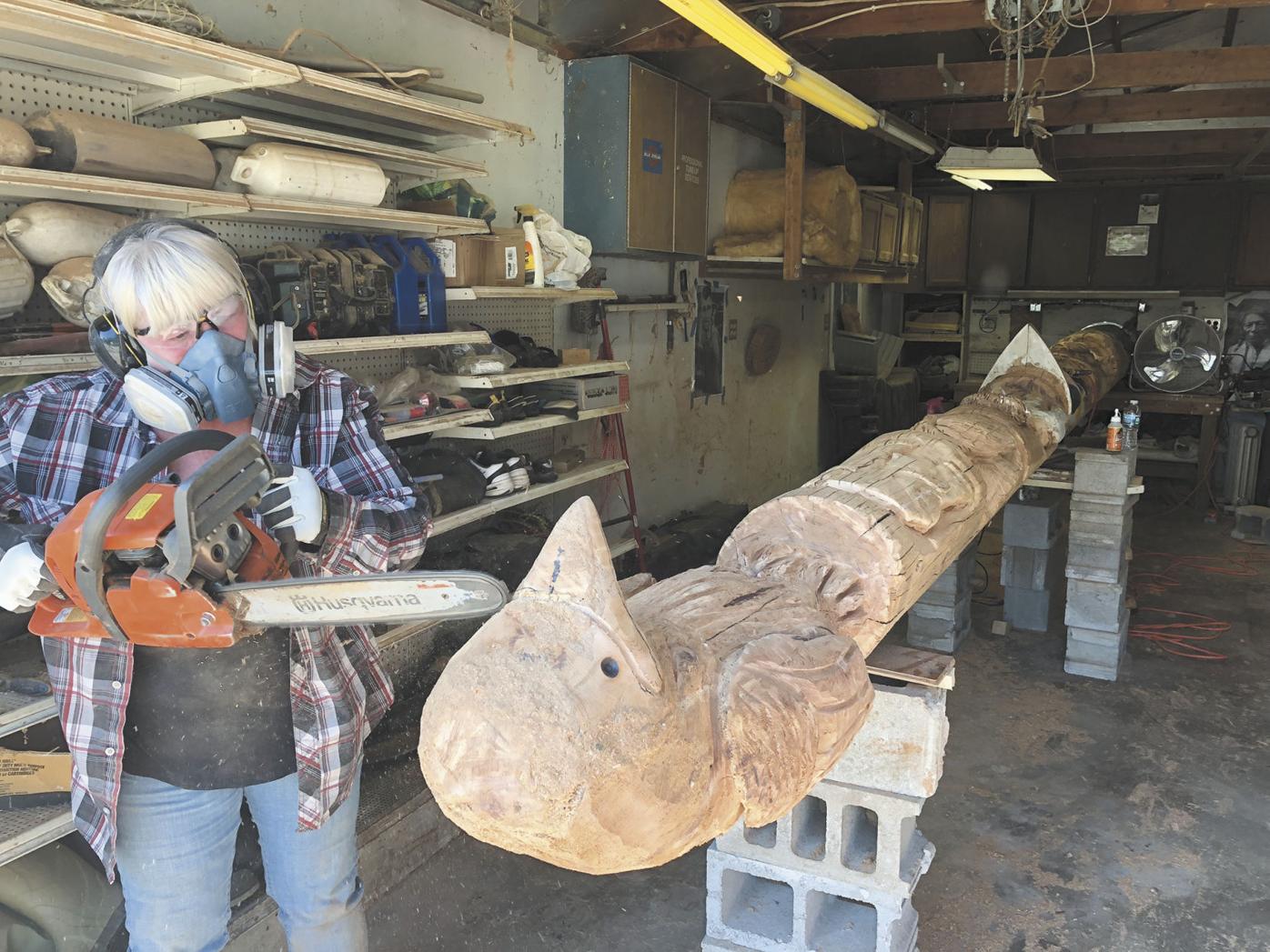 Jennifer Ruse works to finish a totem pole with a chainsaw and a grinder near Fort Atkinson. 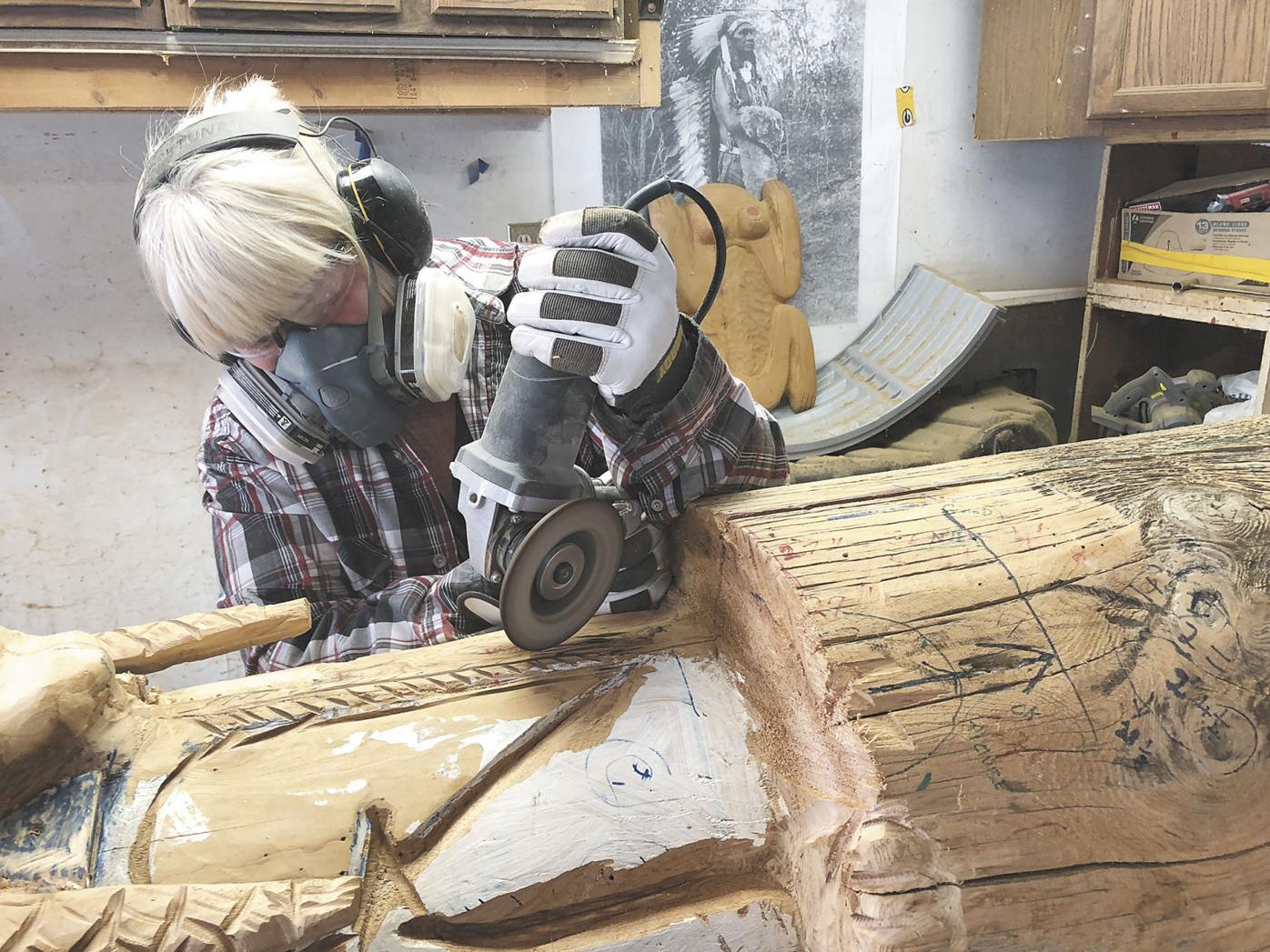 Jennifer Ruse works a grinder finish a totem pole for a man near Fort Atkinson she had never met. 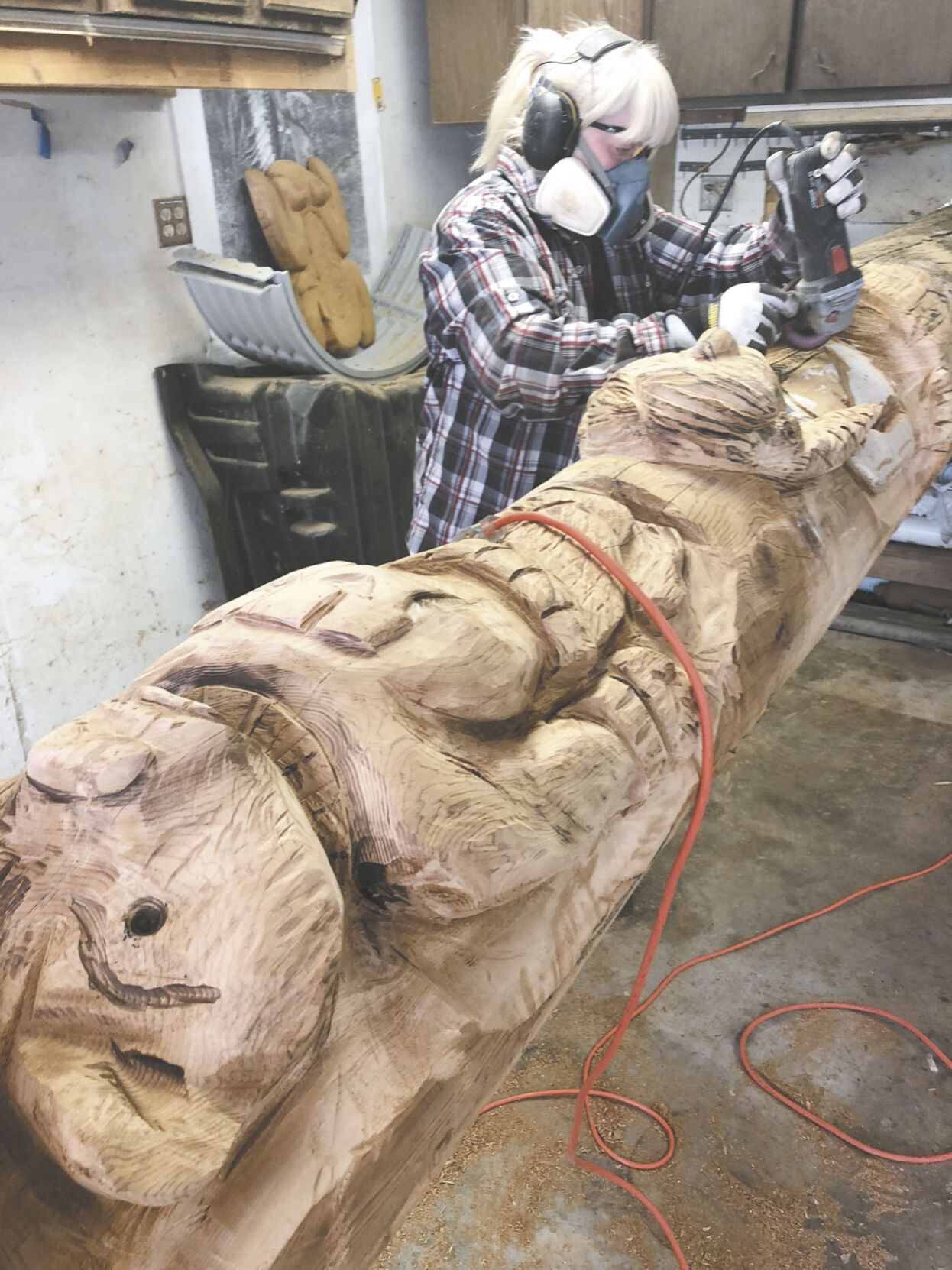 Jennifer Ruse works to finish a totem pole for a man near Fort Atkinson she had never met.

Jennifer Ruse works to finish a totem pole with a chainsaw and a grinder near Fort Atkinson.

Jennifer Ruse works a grinder finish a totem pole for a man near Fort Atkinson she had never met.

Jennifer Ruse works to finish a totem pole for a man near Fort Atkinson she had never met.

There is one last wish L.A. Wilson had.

Something he shared with his son Alan, who wondered where to begin to finish a life’s work.

Along Lake Koshkonong, where a row of homes sit along the water’s edge, a stand-alone garage houses Wilson’s final work — a glimpse of his true passion.

Wilson was nearly complete with the 40-foot-high totem pole that also tells a story of a man who didn’t really have many hobbies in his 93 years. It’s a story of how he saw Wisconsin, and one he wanted to share with the world.

But the person who now is taking the final steps on the project never met Wilson. But for Jennifer Ruse, she is helping make a family’s legacy viewable for everyone to see.

Ruse is a chainsaw carving artist from Janesville who has been traveling to the home just outside Fort Atkinson to finish what Wilson had started five years ago.

“This is the first piece of art I’ve finished for someone else,” she said, stepping back to take a look at the piece that extends through the back wall of the garage. “I think it’s got a little of both of us in there.”

Before he died on Feb. 9 of this year, Wilson was telling Alan, and anyone who was there, to finish the totem pole.

He had worked hard to reflect the state — from Bucky Badger to the back end of a cow that was inspired by a ceramic piece of art at the Pine Cone Restaurant in Johnson Creek.

And there is a Wisconsin cheesehead holding a football that he carved and started to paint.

“I call him Wilson,” Ruse said.

Wilson had completed what he could — some parts carved and painted, and others simply a drawing of what the vision would be. There were holes drilled in areas to show the depth he was after.

With the family still dealing with the passing, Alan turned to the totem pole and wondered what’s next.

Alan soon contacted three people who he thought could help. And one neighbor knew Ruse, who owns Roadside Saw Works.

She had started doing her first chainsaw work in 2018 when she saw a project someone had done.

“I got bored and decided to buy a chainsaw,” Ruse said. “I can do that. I can carve that.”

She started with a mushroom. And bears, eagles, birdhouses and signs followed. Ruse sells her smaller pieces on Saturdays at the Beloit Farmers Market.

Soon her husband was bringing her logs and asking what she sees. One piece her husband thought could be two turtles. When Ruse looked, she saw an eagle carrying a catfish.

She calls her work rustic, not finished. And the pieces she creates capture her vision. She works quickly with a chainsaw, seeing in her mind what she wants.

Last week, she set out to continue the work that Wilson started by carving her first pieces ever of a totem pole. After a few pulls on the chainsaw cord, and a loud roar of the tool, she started working toward the top on the giant white crow that also represents the name of the road Wilson lived along.

She started cutting a few more grooves to the piece with sawdust flying about.

“I never thought about doing someone else’s work,” Ruse said. “I was drawn to it.”

When Ruse works, the first ideas are her best ideas, she said. But on occasion, a piece might have to change along the way.

One of the challenges with this piece not only was keeping with someone else’s vision, but trying to get situated on how to tackle a piece this large lying on its side. The totem pole is so large it’s hard to take it all in without walking alongside and seeing the story it tells.

But Ruse was ready for this task. She has climbed on top of the piece and stood at the side. She even sat on a chair for some of the work. First, she uses a chainsaw. Then a grinder for the detail in her work. No chisels here.

So, where does someone get a giant log to even start a project like this? That answer is simple. Telephone poles are all around us. This pole once carried messages to people through telephone wires. Now, the messages tell a different story.

Ruse said that while being suspended over the piece crossed her mind, she worked away from every angle to get the right look.

And while wielding a chainsaw for her art might seem risky, Ruse said her husband is supportive of her work, and her ideas.

The hardest thing, she said, is staying true to Wilson’s vision when working.

“I had to really try to not make it mine,” Ruse said.

Wilson began making totem poles 35 years ago, starting with a small four-foot model. Of the large ones he worked on, people can see his other work across the street from the Fireside Dinner Theater in Fort Atkinson.

“For 35 years I’ve been hearing about totem poles,” Alan said.

While Wilson spent his life as an engineer who worked for Motorola, he found the totem pole projects to be his other calling.

“If it didn’t make him money, he didn’t spend time on it. But this he did,” Alan said of the totem poles.

And the person who is fulfilling the vision of his last work is someone he never met.

Ruse spent Wednesday priming and painting the last of the work. And now it’s ready.

“I feel so honored to be asked to complete L.A.’s work. I wish I could hear the comments he would have made regarding the completion of his pole,” Ruse said. “I feel a bit guilty completing it in a week’s time. I also wish I would have met him. Everyone speaks so highly of him.”

Sometime in the near future, the totem pole will be placed at a park not far from where the pole was started. We Energies has agreed to install it.

It is one last story a man named L.A. wanted to share with the world.