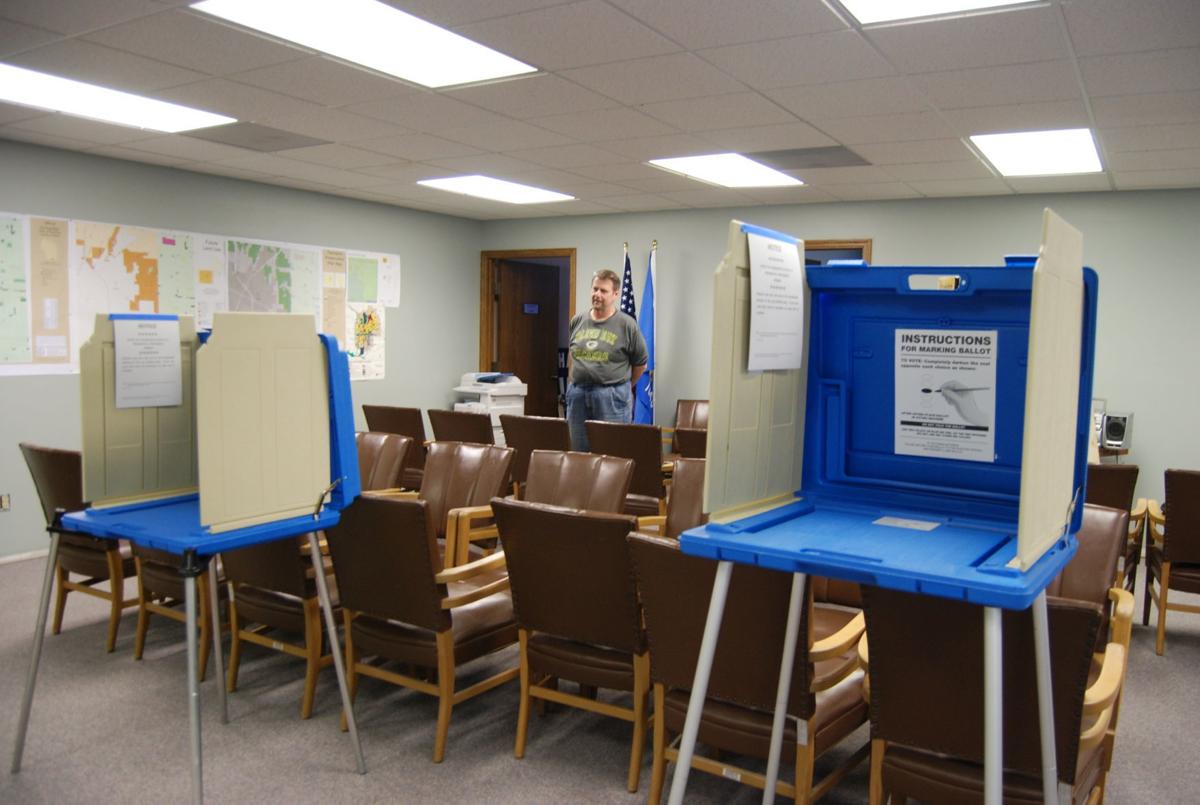 Town of Harmony Clerk Tim Tollefson talks about new procedures in place for Tuesday's election. While the town hall usually has nine booths, during this election there will only be four available to help with social distancing. The state Legislature has been called to a special session by Gov. Tony Evers this afternoon to decide if the election will progress as planned or move to a mail-in vote only model. 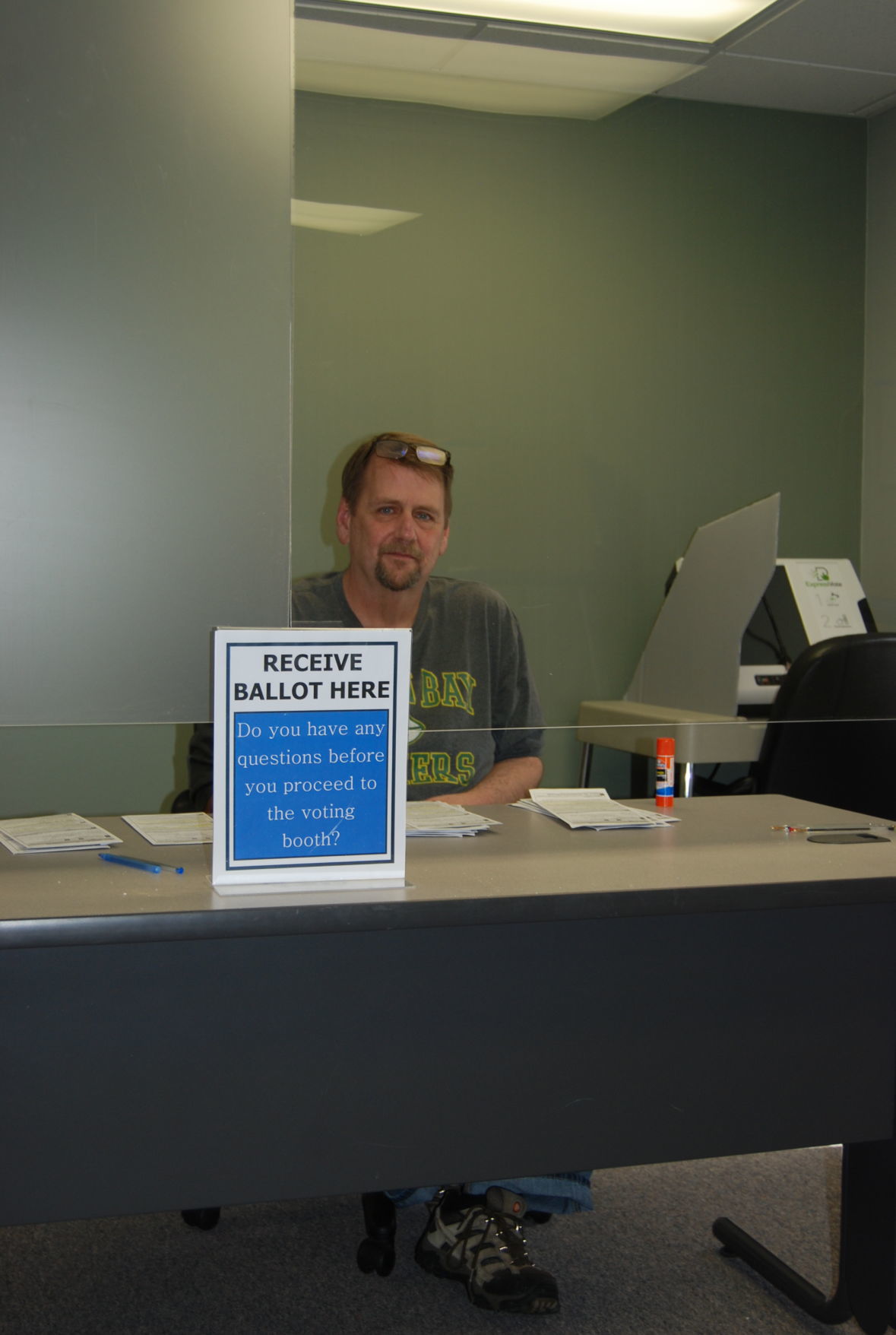 Town of Harmony Clerk Tim Tollefson says he's ready to run a fair and accurate election on Tuesday, April 7. With over 700 absentee ballots already submitted, he said he is expecting a few hundred constituents to vote on Tuesday. That, unless the state Legislature decides to move to an all mail-in election as called for by Gov. Tony Evers. That decision is expected to be made today.

Town of Harmony Clerk Tim Tollefson talks about new procedures in place for Tuesday's election. While the town hall usually has nine booths, during this election there will only be four available to help with social distancing. The state Legislature has been called to a special session by Gov. Tony Evers this afternoon to decide if the election will progress as planned or move to a mail-in vote only model.

Town of Harmony Clerk Tim Tollefson says he's ready to run a fair and accurate election on Tuesday, April 7. With over 700 absentee ballots already submitted, he said he is expecting a few hundred constituents to vote on Tuesday. That, unless the state Legislature decides to move to an all mail-in election as called for by Gov. Tony Evers. That decision is expected to be made today.

On Friday afternoon, Town of Harmony Clerk Tim Tollefson was making last minute adjustments in advance of the pending April 7 general election to his community’s town hall, a 30- by 30-foot room in a multipurpose government building just outside of Janesville.

Harmony has a population of about 2,500, with about 1,400 registered voters, Tollefson said. As of Friday, the last day after a recent extension to apply for an absentee ballot, Tollefson said he had received just over 700 absentee votes. More were expected to trickle in by the 5 p.m. deadline. Also new on Friday was a statewide decision to extend the voting period for those holding absentee ballots from April 7 to April 13.

Seven hundred absentee ballots was a goal he had hoped to hit, Tollefson said. Under more traditional circumstances, he would have expected to see about 300 absentee ballots and about 60 percent of registered voters coming through the doors of town hall, 440 N. US Highway 14, on Tuesday. Using that number as a benchmark, he said, he was planning for “a few hundred” to arrive at the community’s only polling place on April 7.

By late Friday afternoon, Gov. Tony Evers had released an executive order, directing the state Legislature to call a special session Saturday afternoon and make changes to the general election. Evers called for the closing of the state’s polling places, advocating instead that all registered voters receive ballots by mail. Voters would then have until May 26 to return their ballots. Ballots would be mailed to voters by May 19.

The request has sparked controversy between the Democratic governor and the state’s Republican led Legislature.

In a letter to the editor published in the April 2 print edition of the Milton Courier, Tollefson wrote about his frustration with the way the election was being handled.

During the several weeks before the election, he said on Friday, instructions and protocols coming to clerks from such entities as the governor’s office, the state Legislature, the Wisconsin Department of Health and the Wisconsin Election Commission were slow to arrive and lacked substance.

Tollefson said that he holds the Wisconsin Election Commission “personally responsible for giving clerks direction,” and some protocols were not shared until last Sunday.

Tollefson called some of the state-supported protocols “ridiculous.”

As example, he said, those quarantined at home using absentee ballots were instructed to leave their ballot on a porch or in a mailbox for at least 24 hours in advance of the arrival of a neighbor, food delivery person or postal worker. That person could then serve as a signature witness through a window or open door.

“To me, that’s ridiculous. When the person signs it they have contaminated it all over again,” Tollefson said.

Another cross-contamination trouble spot, he said, is the voter signature book.  When voters arrive and show ID, they are given a number that is written in a book alongside the voter’s name. The number is matched to the ballot to ensure each voter gets only one. The next step is to record the number in a second book and ask the voter to sign that book. While suggested protocols addressed the passing of the book, instructing voters and poll workers to step back by six feet after making entries into the book, they didn’t address the fact that multiple people would be touching the same book, Tollefson said.

Theoretically, he said, “200 people could touch that poll book.”

Within Rock County, he said, area municipal clerks had been communicating with one another, offering ideas about how to find and mitigate points of cross-contamination within their polling places as voters arrived into a process requiring multiple people to touch and use common items, ranging from pens and registration cards to door knobs and voting booths.

In Harmony, Tollefson said, the average age of his poll workers is 70, and about half of his workers “stepped out” from the process.

“If they don’t feel confortable, then they should step out. Their service over the years has been much appreciated by everybody,” he said.

Tollefson understood, he said, identifying himself, at 58, as a person with underlying medical conditions that placed him, would he contract COVID-19, in a high-risk category.

“The clerks in Rock County have been communicating with each other continuously, trying to show each other what we are doing,” Tollefson said.

To mitigate cross-contamination, he said, he bought 600 pens and is making in his home shop “pen trees” into which the pens can be placed by volunteers using gloves. As voters arrive at town hall, if they don’t have a pen with blue or black ink, they will be instruction to take a pen “for keeps,” Tollefson said.

Also new, is a shield built of Plexiglas erected between the voting public and the poll workers who will check voters in, assign them a number and give them a ballot.

Early on, Tollefson said, in absence of what he called clear direction from state level agencies, he was instructing his poll workers to buy sanitizers at the store and keep the receipts. As a result, he said, poll workers do have sanitizing products for their use behind the shield.

“We (clerks) had a teleconference two weeks ago and they (state officials) kept talking about sanitizers. We asked how to get them and they said talk to county officials, but they were already out,” Tollefson said.

If voters do come to the polls on April 7, they will encounter changes at town hall, beginning with how voters will be allowed to enter the building.

Adhering to protocols calling for gatherings of no more than 10 people, Tollefson said, only 10 people will be allowed in the town hall room at one time. He will have a staff of seven, including three election workers viewing IDs, assigning voters numbers and handing them a ballot, working from behind the Plexiglas shield. Two more workers will be at a table where they will announce absentee voters by name and walk their ballots for placement into the voting machine. Another worker will be stationed between the four voting booths that will be made available on the voting floor. Normally there would be nine. That person’s job will be to sanitize the booth after each voter. A seventh worker is the assistant chief inspector, whose job is to “address any problems that might pop up,” Tollefson said.

That leaves room for three voters at a time to enter town hall, he said.

To facilitate the process, voters, upon arriving to the multipurpose government building will be asked to line up six feet apart on the sidewalk near the building’s east entrance. A poll worker, serving as monitor, will instruct individual voters as to when they can enter the building. Once inside the vestibule, they will be asked, if registration is required, to do so in the vestibule where a worker will take their information using a computer. A printout of the information will be sent back into the town hall. No paper will change hands in the vestibule, Tollefson said. Once inside the hallway, voters will be directed to stand on predetermined spots marked with an X, keeping them at least six feet apart while waiting their turn to enter the polling place.

A poll worker, serving as monitor at the polling place door, will direct voters inside. As one voter leaves, the next will be allowed in, Tollefson said.

Everyone involved will be in communication using walkie-talkies, he said.

“I have to assume everybody walking in here has the virus and I have to find a way for us all, workers and voters, to be touching things as little as possible,” Tollefson said.

Under normal circumstances, Tollefson said, workers would expect patterns of increased voter traffic synchronized with the workday schedule: increases in traffic flow was typically seen in the morning, at lunchtime and in the late afternoon to early evening, he said.

With so many sheltering at home and no longer guided by the workday schedule, he said, he can’t predict how voters will respond. He hopes people will arrive is smaller numbers throughout the day rather than following traditional habits.

Tollefson said he has been posting daily updates on the town’s website: townofharmony.com.

In the meantime, Tollefson’s advice to voters: “be patient, be considerate, and it’s key to touch anything as little as possible for the sake of everyone’s health.

“If everyone is patient, it will be a fair and accurate election. Everybody will get to vote. We are 100 percent ready for it.

To add a little levity to a serious situation, he said he has ordered T-shirt for his workers and volunteers saying: “I survived the COVID-19 election of 2020.” The shirt features a picture of a roll of toilet paper.

This story will be updated.