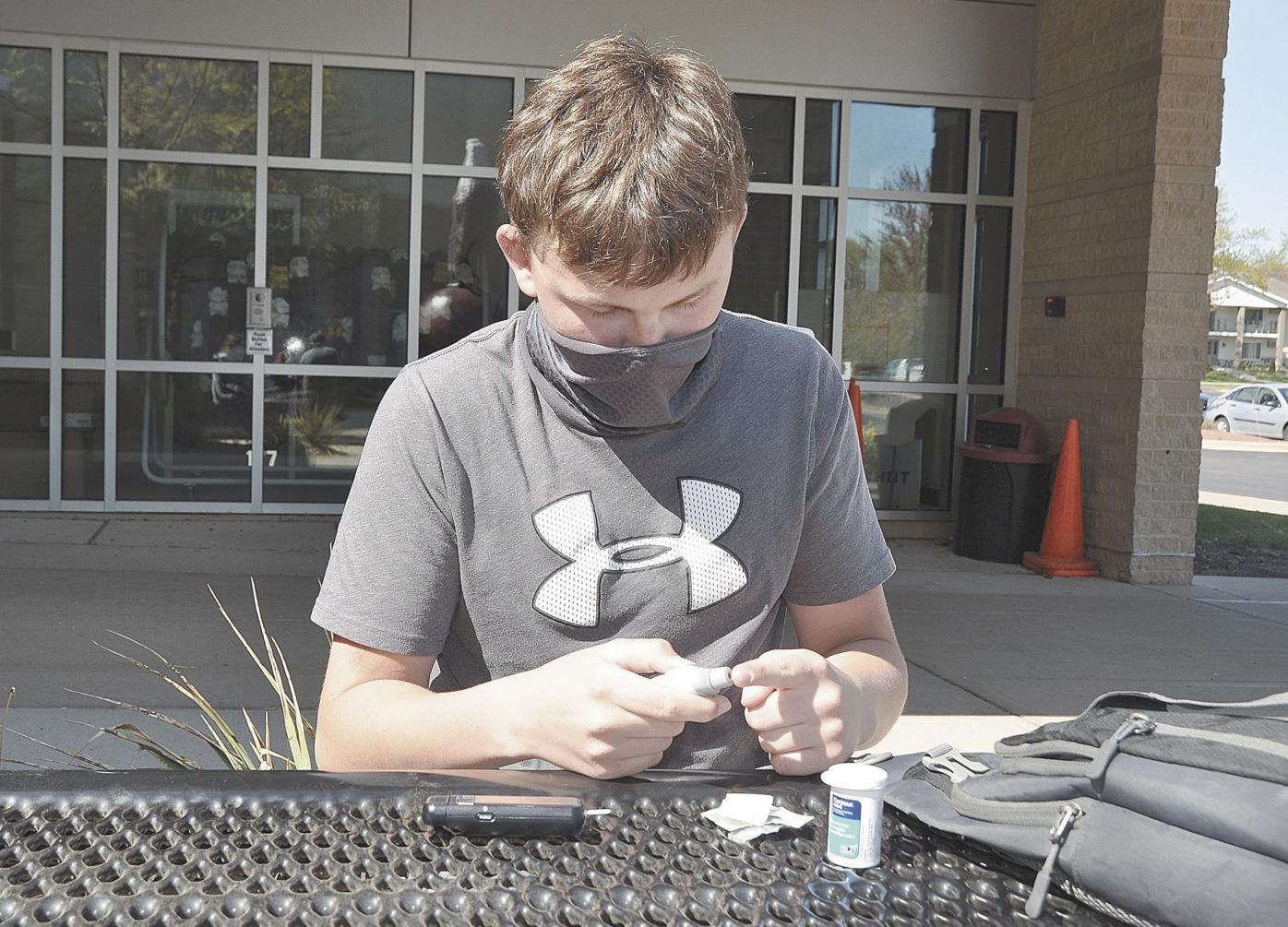 Hunter Jacobson, a freshman at Jefferson High School, tests his blood sugar as he prepares to recalibrate the sensor that communicates with his insulin pump. 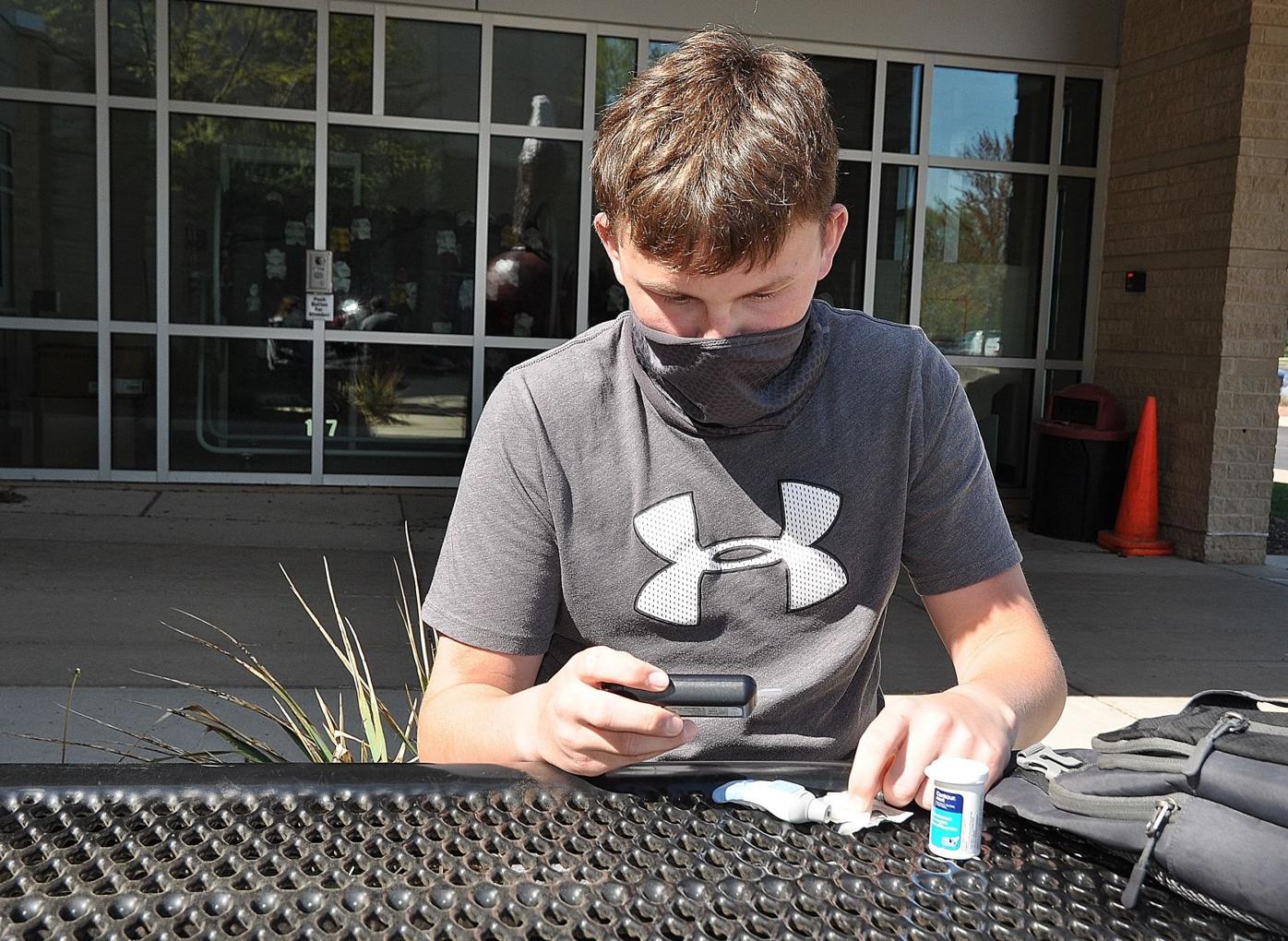 Hunter Jacobson, a freshman at Jefferson High School, reads his blood sugar test strip as he prepares to recalibrate his pump..... 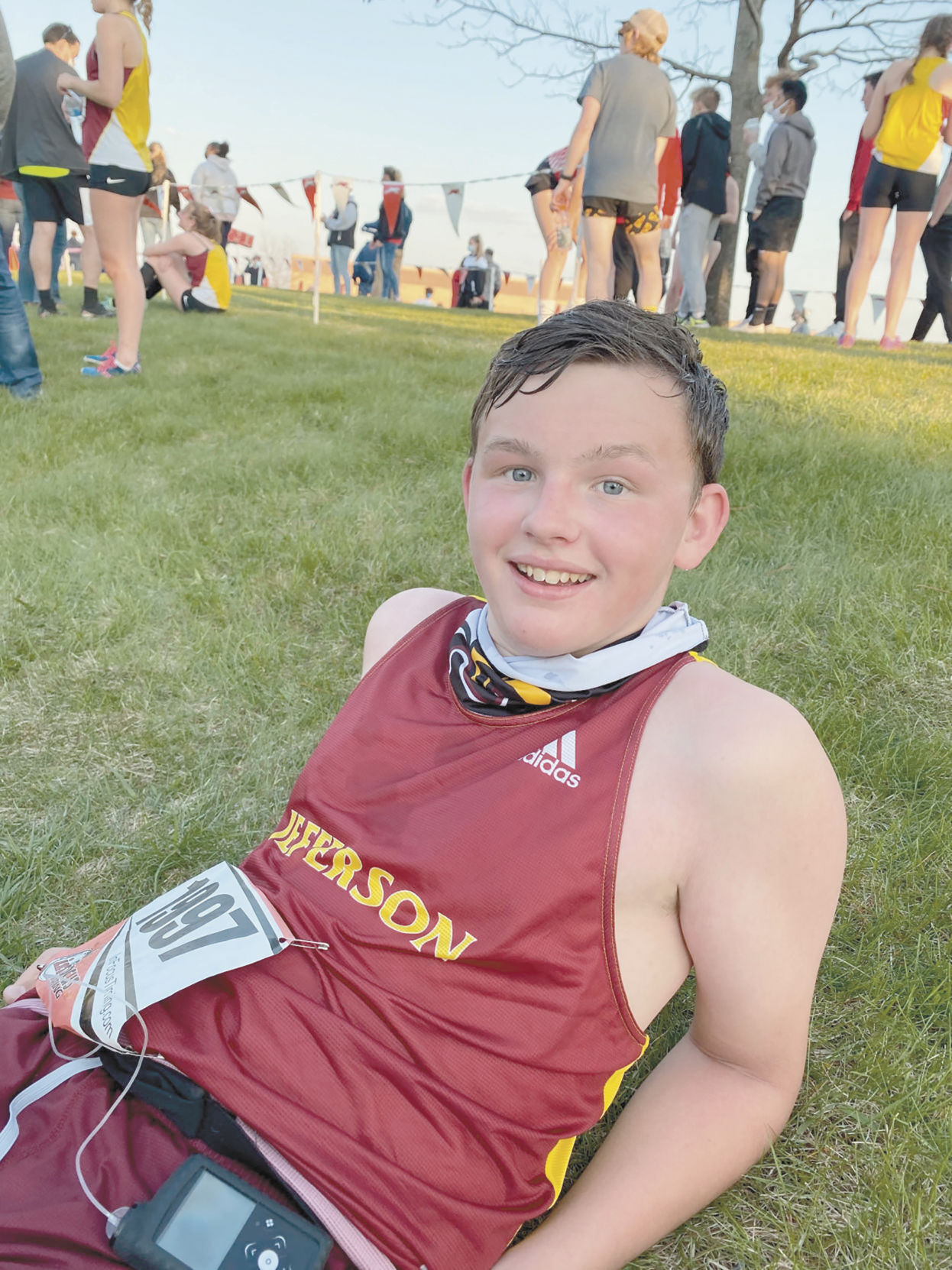 Hunter Jacobson after finishing a cross country race, his insulin pump at his hip. 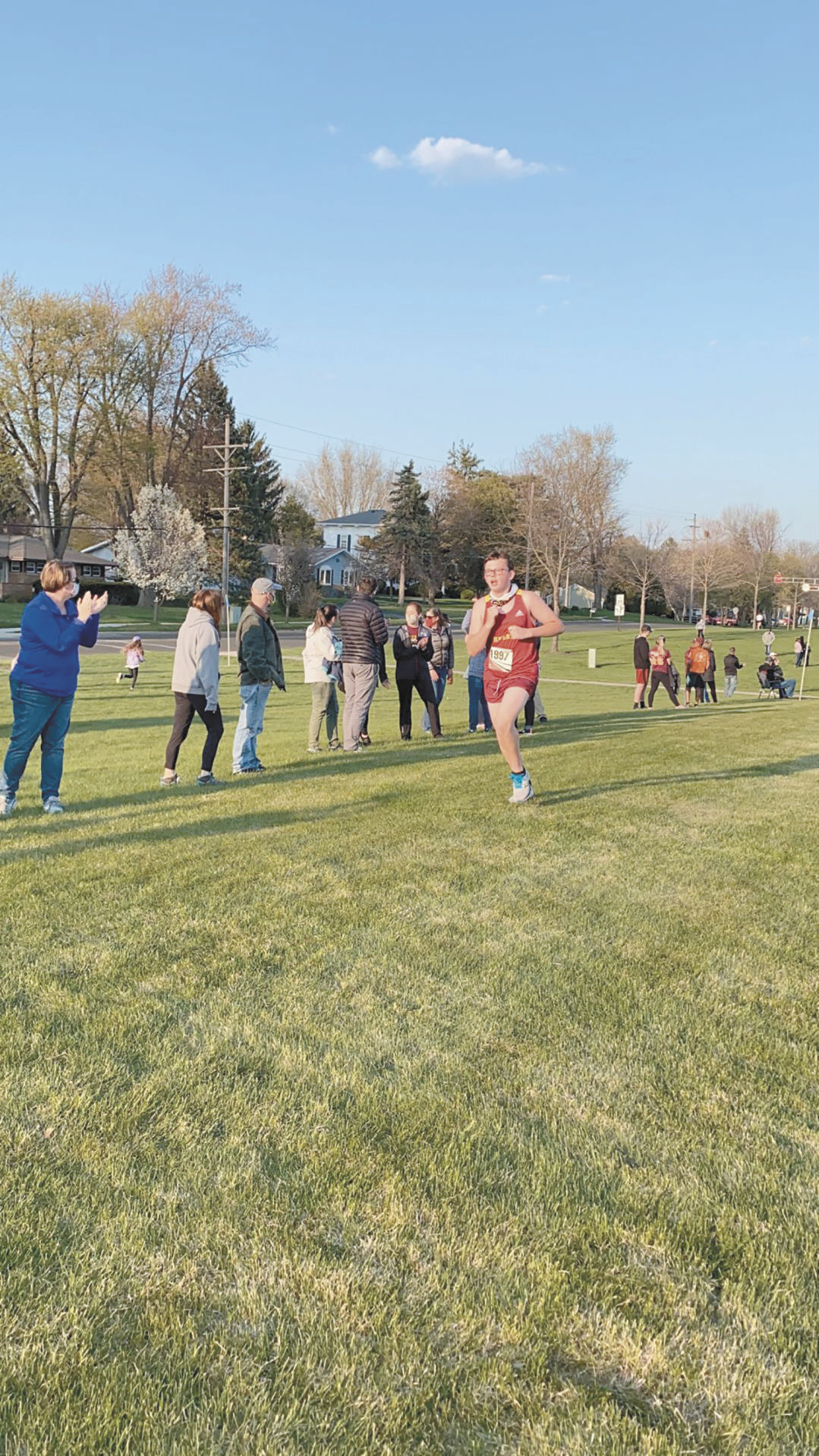 Hunter Jacobson comes in to the finish line after completing a cross country race.

Hunter Jacobson, a freshman at Jefferson High School, tests his blood sugar as he prepares to recalibrate the sensor that communicates with his insulin pump.

Hunter Jacobson, a freshman at Jefferson High School, reads his blood sugar test strip as he prepares to recalibrate his pump.....

Hunter Jacobson after finishing a cross country race, his insulin pump at his hip.

Hunter Jacobson comes in to the finish line after completing a cross country race.

When Hunter Jacobson decided to join the cross country team as a freshman, it wasn’t simply a matter of signing up and showing up for practice.

He had to consult with his doctor, his parents, his teachers and coaches, and set up numerous safety protections and protocols.

What if his blood sugar dropped during a race? Should he have a snack or drink on him? Should someone stand by at various points of the race in case of an emergency? Should he turn off his insulin pump ahead of time as a precaution?

Hunter, 14, of Jefferson, is no stranger to diabetes. He has lived with this chronic illness for as long as he can remember. But as with every new endeavor, starting cross-country this year meant a lot of thinking and planning ahead to make sure he had the tools to succeed.

And succeeding in Hunter’s mind never was about winning, but rather about living a full life and managing his chronic condition well enough so he could take on the challenges he wanted to.

The Jefferson High School freshman by far isn’t the only student his age managing this disease. In fact, diabetes is among the most common conditions for which students have health records in the school office, according to school nurse Lyn Zaspel.

But people still have misconceptions about the disease. They’re surprised to find out that someone their age has it. Or they think having diabetes limits what people can do.

The high school freshman has tried to be an advocate for the cause. He has participated in fundraisers, mentored younger kids who just have been diagnosed, and donated his earnings from the Jefferson County Fair/4-H Meat Animal Project toward the Juvenile Diabetes Research Foundation.

How it startedHunter just was a toddler when his parents began to notice their child was drinking a lot of water. Soon his parents could see he was losing a concerning amount of weight.

The Jacobsons scheduled a doctor’s appointment, but ultimately became concerned enough to take him to St. Mary’s Hospital in Madison ahead of his appointment. The medical team at St. Mary’s in Madison immediately determined that their son had diabetes.

The 2-year-old spent four days in the hospital, during which time the St. Mary’s staff received a crash course in how to care for him — basics like testing his blood sugar and administering insulin shots along with maintenance tools like counting the carbohydrates in his food so his sugar levels would not climb precipitously.

Less than 24 hours after being released from the hospital — and just as his parents were getting into their new routine — an inconvenient illness landed Hunter back in the hospital. Apparently he had picked up something contagious. Even a minor cold or the flu can change the way the body’s blood sugar levels shift, so for a newly diagnosed diabetic, this was a crisis.

Ultimately, the youngster was home for good and he began a life in which he learned the ins and outs of diabetes along with the alphabet and numbers.

The initial months were full of ups and downs.

Laura Jacobson, Hunter’s mom, said they would give him his insulin as directed, but depending on his activity level they would see his blood sugar level roller coaster from 40 to 400. (Normal is 100. Drop too far below that and it’s dangerous, while a blood sugar that’s too high can cause serious impairment and eventually coma.)

“So we talked to the endocrinologist,” Laura said. “We said, ‘There’s got to be something we can do to even this out.’”

On the specialist’s advice, the family invested in an insulin pump which automatically adjusts Hunter’s insulin levels in accordance with his blood sugar levels.

He later upgraded to a higher-level sensor which automatically tells his blood sugar. Even this has to be re-calibrated regularly to make sure it is accurate.

This system works great for regular levels of activity, but when he’s facing a big expenditure of energy — as with a three-mile cross country race — Hunter has to disable this automatic system, lest his blood sugar drop too low.

“When I have to run, I stop the pump so I’m not getting any new insulin,” Hunter said. “I also have juice and a snack, maybe 15 to 30 carbs, for additional fuel.”

He does another quick blood sugar check 15 to 20 minutes before the race, just as warmups are starting.

“If my blood sugar is high, I get really thirsty and dehydrated,” Hunter said. “I can’t think properly and I overheat. If I’m low, I get really hungry. My legs start to feel weak and shaky, and I can be cool and clammy.”

Either extreme is a state he wants to avoid.

Never having participated in the sport before, when Hunter first started training with the cross country team, he didn’t know what to expect. He worked really closely with the coaches and took a graduated approach, starting with one mile, building up to two and finally running all three.

It was a steep hill, entering a very competitive sport untrained, unconditioned, and with a significant health condition to work around, but Hunter persisted.

Coach Megan Carstens said she didn’t know if Hunter would come back after the first practice, but he did.

Meanwhile, the rest of the team made it clear they had his back. During practice, they’d encourage him, staying positive, and after crossing the finishing line themselves, team members would hang around to cheer Hunter on.

Together, they ran through snow, swamping rain and oppressive, summer-like heat.

Jacobson made steady progress and escaped any medical emergencies. The only minor incident happened when Jacobson was not in view of any of the others on a particular course and got confused about which way to turn.

Luckily, assistant coach Doug Siegert pulled up in a golf cart and escorted him along the correct path.

Jacobson always has been open about his diabetes, giving talks in his elementary and middle school classrooms, explaining what he’s doing when he pokes his finger to read his blood sugar, for example.

The freshmen said what he most would like people to know is that it’s possible to live a full life with this chronic condition — as long as one stays on top of it and manages it properly.

He said it also is important for people to know the warning signs of diabetes — like being excessively thirsty and needing to urinate a lot — as anyone can get it, from children to senior citizens.

Two types of diabetesThere are two main types of diabetes. Type 2 (non-insulin dependent) diabetes is an impairment in how the body regulates and processes sugar. It can be linked to obesity and often can be controlled through diet and exercise, or if needed, medication.

Hunter has the other, insulin-dependent, form of diabetes, Type 1. Thought to have a genetic component, this often strikes children but also can affect adults. In this case, the body stops making its own insulin entirely and relies on insulin shots to survive.

A century ago, diabetes was fatal. Pediatric patients rarely lived more than a year after diagnosis. In 1922, medical researchers produced the first insulin shots, and continual advancements in treatment over the last several generations have made it possible to live a long, full and comfortable life.

“If you stay with the right regimen, you can really do anything you want to do,” Hunter said. “Diabetes isn’t going to hold you back. You just have to manage it.”

Hunter’s mom said she was so proud of her son for taking on the challenges he has and for being willing to share his health issues with others.

She said the whole family has learned right along with him. Incidentally, she now works in diabetic education at Fort HealthCare.