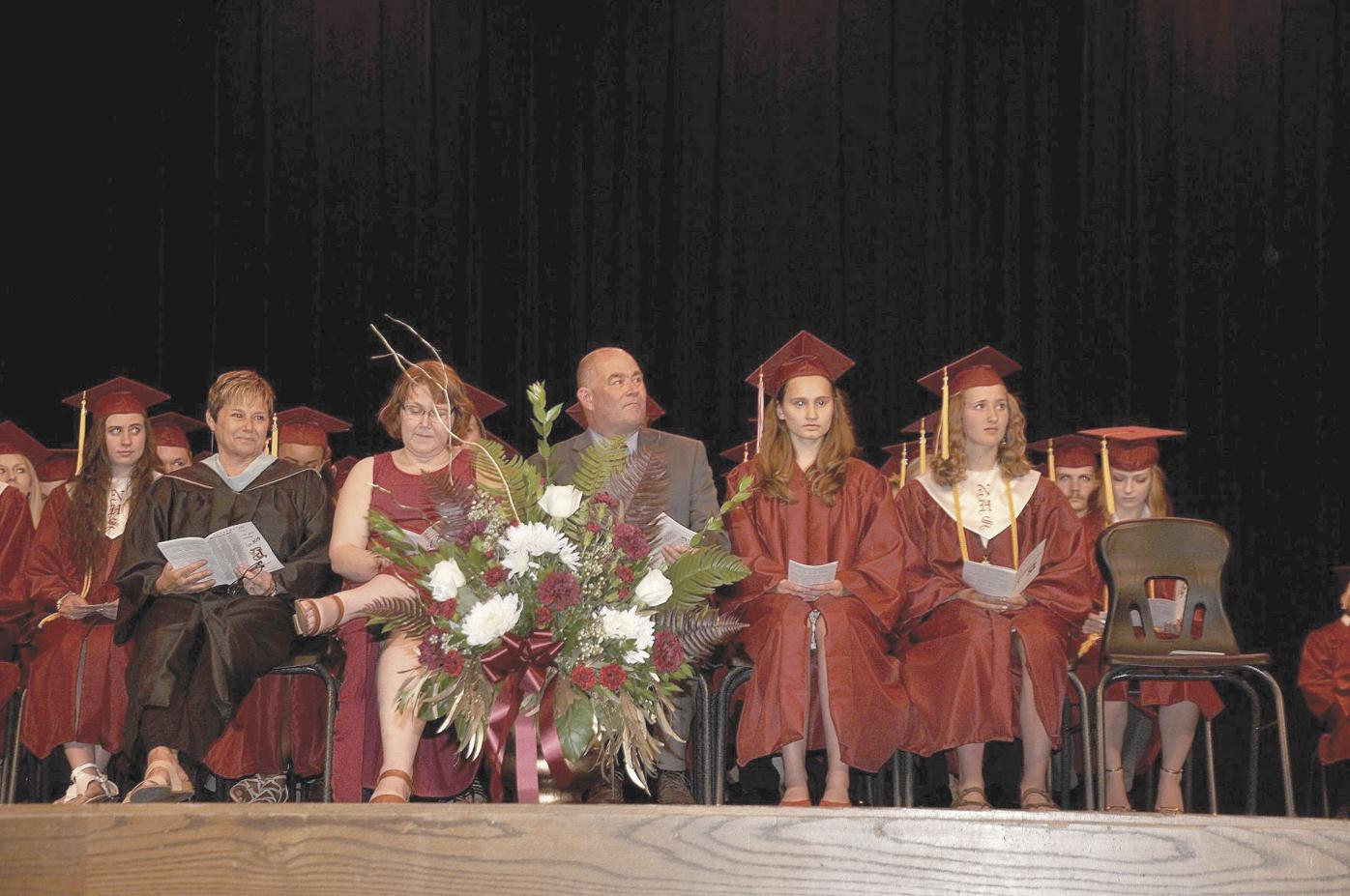 Mark Rollefson, center, will be retiring July 1 from his position as superintendent of the School District of Jefferson after 32 years of service to the local district as a teacher, coach, principal and superintendent. 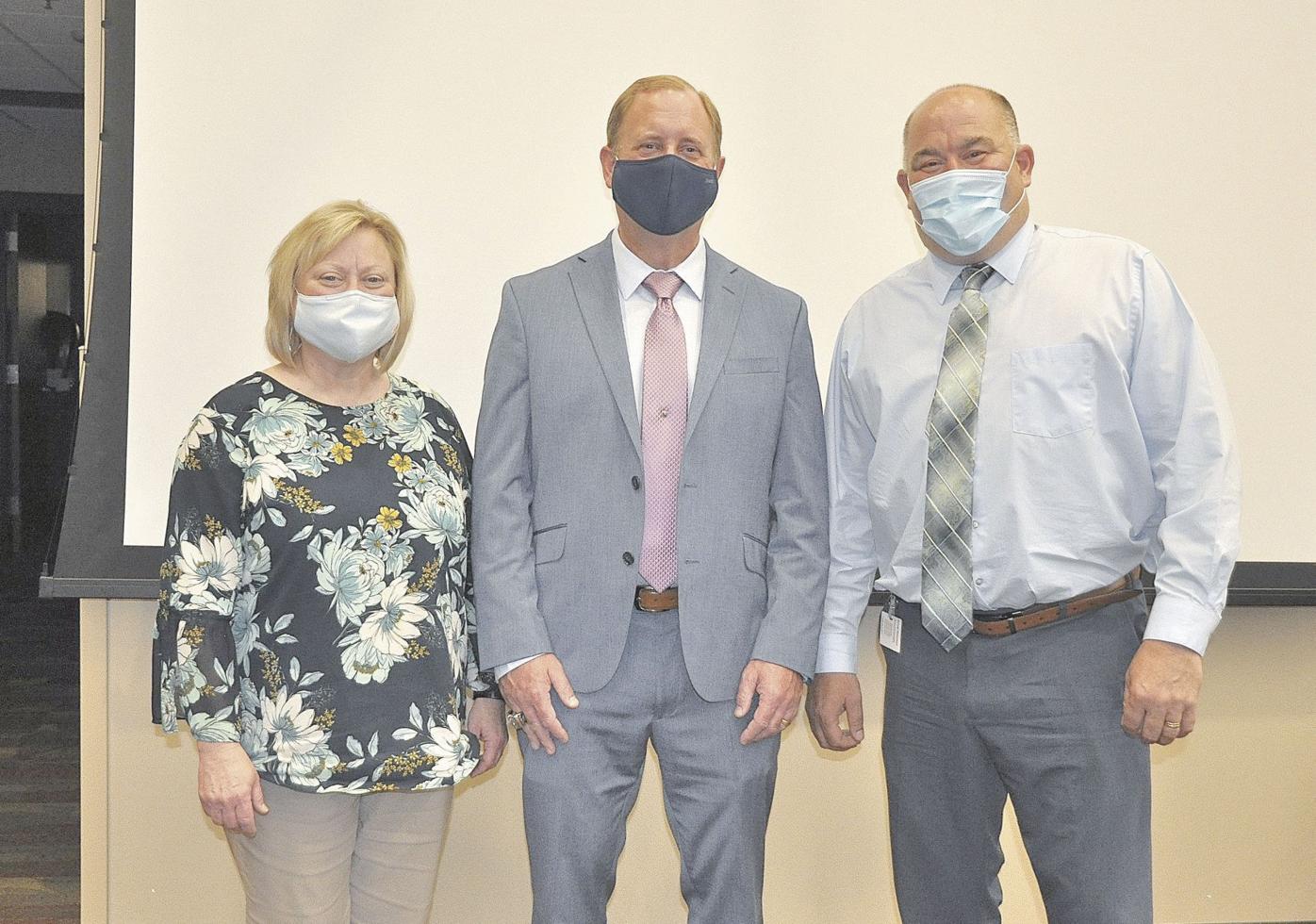 The School District of Jefferson Board of Education recognized three longtime employees who will be retiring at the end of this school year, each having given more than 30 years of service to the district. Pictured above are, from left, Cathi Dinkel, Jefferson Middle School eighth-grade English/Language Arts teacher; Steve Dinkel, Jefferson High School principal; and Superintendent Mark Rollefson. Also retiring this year are employees Gloria Wangard (five years with the district) and Sally Schutte (3 1/2 years with the district.)

Mark Rollefson, center, will be retiring July 1 from his position as superintendent of the School District of Jefferson after 32 years of service to the local district as a teacher, coach, principal and superintendent.

The School District of Jefferson Board of Education recognized three longtime employees who will be retiring at the end of this school year, each having given more than 30 years of service to the district. Pictured above are, from left, Cathi Dinkel, Jefferson Middle School eighth-grade English/Language Arts teacher; Steve Dinkel, Jefferson High School principal; and Superintendent Mark Rollefson. Also retiring this year are employees Gloria Wangard (five years with the district) and Sally Schutte (3 1/2 years with the district.)

JEFFERSON — A fixture in the Jefferson community since 1989, retiring school Superintendent Mark Rollefson is experiencing a strange phenomenon. His calendar, instead of getting busier, is slowly clearing, with more and more white spaces opening as he nears his retirement date of July 1.

But though he’s stepping down from his full-time administrative position, Rollefson isn’t ready to leave education completely behind.

He recently accepted a part-time superintendent position in the Yorkville K-8 district, which will allow him to continue doing what he loves but with much less of a time commitment.

But the Yorkville job offers a more gradual step down from the hustle and bustle of everyday school life.

Rollefson has been with the Jefferson schools for the greater part of his educational career. An Oconomowoc native, Rollefson said the Jefferson community won him over and though he left for a couple of years — first for an Oconomowoc teaching position and then for a brief stint in pharmaceutical sales — he already felt his heart was here in his adopted hometown.

Rollefson’s first job in education was as a middle/high school science teacher in Belmont. He came to Jefferson High School in 1989, teaching high school chemistry and physical science, and coaching baseball under head coach Bob Zweifel.

“So that year, I was overseeing seniors I had taught as freshmen,” Rollefson said.

Rollefson also worked under interim principal Ken Leipold for a semester, then Mike Cipriano for two years before succeeding Cipriano as Jefferson High School principal in 2001.

In 2004, Rollefson bucked tradition to assume the principalship of Jefferson Middle School after a time of turbulence. Within a couple of years of Rollefson’s arrival, the school atmosphere had changed so much that the middle school staff nominated him for a state-level award.

Rollefson subsequently was named Wisconsin’s middle-level Principal of the Year in 2007.

Not long after that, Rollefson — still at the middle school — was among the three finalists for the Jefferson superintendent job, but at that time he had not quite completed his doctorate, and the school board went with Craig Gerlach instead.

In 2013, after a couple of years of administrative turbulence at Jefferson High School, Rollefson started his second stint in that job, with current (also outgoing) high school principal Steve Dinkel by his side as associate principal.

In 2016, Gerlach left for Stevens Point and Rollefson was selected to become Jefferson’s next superintendent.

Throughout his years in Jefferson, Rollefson said he has found many mentors among the Jefferson staff. To name just a few from the earlier years, he listed coaches Bob Zweifel and Ken Leipold; teachers Carolyn Behrens, Family and Consumer Education; Mark Touhey, English; Skip Schulz and Bill Brandel, social studies; and Fran Vandre, special education, but he noted that he continues to learn from the newer staff even today.

Asked how education has changed during his three decades-plus in the field, Rollefson said the most obvious answer centers on all of the technology changes schools have adopted and adapted to.

Looking deeper, he said that this ties in with a swifter pace, faster response time and more connected educational system overall.

This is good in that school staff is accessible in an instant even on their off days, but it has a negative effect, too, of eroding weekends and days off that otherwise might provide respite from all of educators’ job responsibilities and restore their energy when they do return to school.

The rise of social media has added one more element administrators have to stay on top of. Sometimes there are misconceptions that need to be corrected, or complaints aired online which should be addressed in person.

As superintendent, Rollefson has tried to stay on top of community sentiment and be responsive to people’s concerns. He tries to call the individuals involved to hear them out and/or to correct any misinformation they might have.

Likewise, cognizant that these channels are many people’s main window onto the world, the district has made use of social media to share the good things that are going on in the Jefferson schools.

In terms of broader social changes, Rollefson said he sees today’s teens as actually more responsible and respectful than teens a generation before.

“My first year as associate principal, we had dozens of noon detentions a day for things like being late to class or disrespecting a teacher,” Rollefson said. “That first year, the high school was averaging more than one physical fight a week, in the halls or at a game. Now, we might see two a year.”

He said he still is amazed that students feel safe leaving their phones at charging stations in the school halls for an hour and a half, confident no one will steal or mess with them. This honor system seems to work well for everyone.

What has changed in the intervening decades? Prioritizing character and a positive school culture throughout the Jefferson schools couldn’t have hurt, but Rollefson credits the students themselves with becoming more aware of the importance of respecting others — and not just figures of authority but other young people as well.

“No matter who you are working with — parents, students, teachers, business people, neighbors — everybody wants to be treated with respect and kindness,” Rollefson said. “People are people no matter their background.”

He noted that while reading, math and other academic measures are important, placing all of the emphasis on test scores “misses the boat,” and that building people skills also is enormously important to students’ future success.

There have been structural changes to education as well, Rollefson said. The rise of open enrollment over the past couple decades has made public schools into competitors for a regional population of students.

Now, with the emergence of private school vouchers, this competition has expanded to include private/religious schools as well.

With this change in mind, the Jefferson district has chosen to focus on school culture, seeking to provide a safe, welcoming environment in which students want to learn. Additionally, the Jefferson schools have boosted student offerings in terms of the variety of classes and the rigor of studies.

“We do have a good relationship with the area districts and the parochial schools, and we do try to cooperate where we can,” Rollefson said. “If you look at just in terms of dollars and budgets, it would be in our interest for other schools to shut down.”

However, he said he recognizes that schools with differing approaches, whether public or private, religious or secular, offer options for families and it’s in students’ interest to keep all of those options open so they can find the right fit.

“In my professional opinion, I don’t believe we should be competing with our neighbors, but rather, looking out for the greater good of humanity,” the outgoing superintendent said.

Rollefson always had it in his long-term plans to retire around this time. However, he did not expect to be doing so amidst a pandemic, which has forced educators to adopt new technologies, approaches and ideas on a very steep learning curve.

“At many times, it could be intense and confusing, but our staff members rolled up their sleeves and got it done,” Rollefson said.

Meanwhile, the necessity of addressing pandemic safety pushed back normal processes like the development of a strategic plan and facilities study.

“Our strategic plan got put on hold for a year while we dealt with the pandemic,” Rollefson said. “Now the district is moving forward with a facilities study.”

Rollefson said he would have like to be a bigger part of that process, but now it’s in the hands of the school board and incoming superintendent Dr. Charles Urness.

Though Urness’ contract technically does not start until July 1, the incoming and outgoing superintendents have been in close touch to facilitate a smooth transition.

“By now I have spent more than 50 hours with Dr. Urness,” Rollefson said. “I am very glad to get the chance to know him. He’s intelligent, classy, a great listener, well-informed and capable of making tough decisions when he has to.

“Knowing he’ll be coming in has put me more at peace than I have ever been with my decision to retire,” Rollefson said.

But retirement from the Jefferson schools does not mark the last educational hurrah for Rollefson.

Originally, the outgoing superintendent had intended to go into educational consulting or teaching at the graduate level.

But a couple of months ago, he received a call from Jon Bales of the Wisconsin Association of School District Administrators, asking if he would be interested in filling a part-time superintendent vacancy with the Yorkville K-8 district in Western Racine County, which feeds into Union Grove High School.

Rollefson was intrigued and wound up taking the two-day-a-week job. His wife, Anne, has a few years to go before she expects to retire and plans to stay at Sullivan Elementary School.

The part-time role will allow the outgoing Jefferson schools chief to keep his hand in education, while giving him more flexibility to spend more time with family members, including his daughter Ashley, her husband and children in Jefferson; his son Mitch, his wife and children in Waukesha; and his parents, who still live in Oconomowoc.