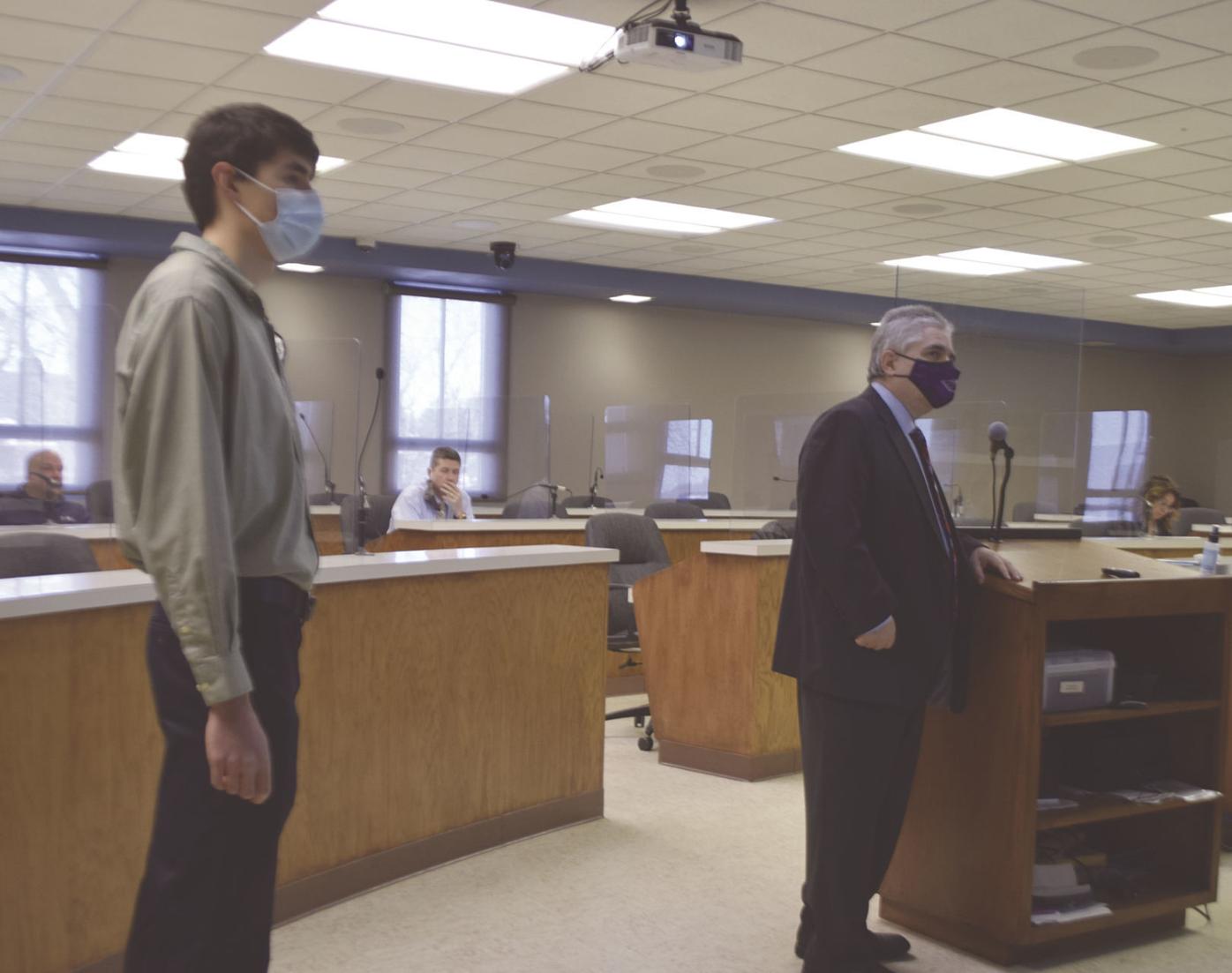 ABOVE: Clayton Gallman, left, and Professor Russ Kashian of the University of Wisconsin-Whitewater Fiscal and Economic Research Center, presented information on the seriousness of the housing shortage in Jefferson County Thursday morning at the Jefferson County Courthouse. 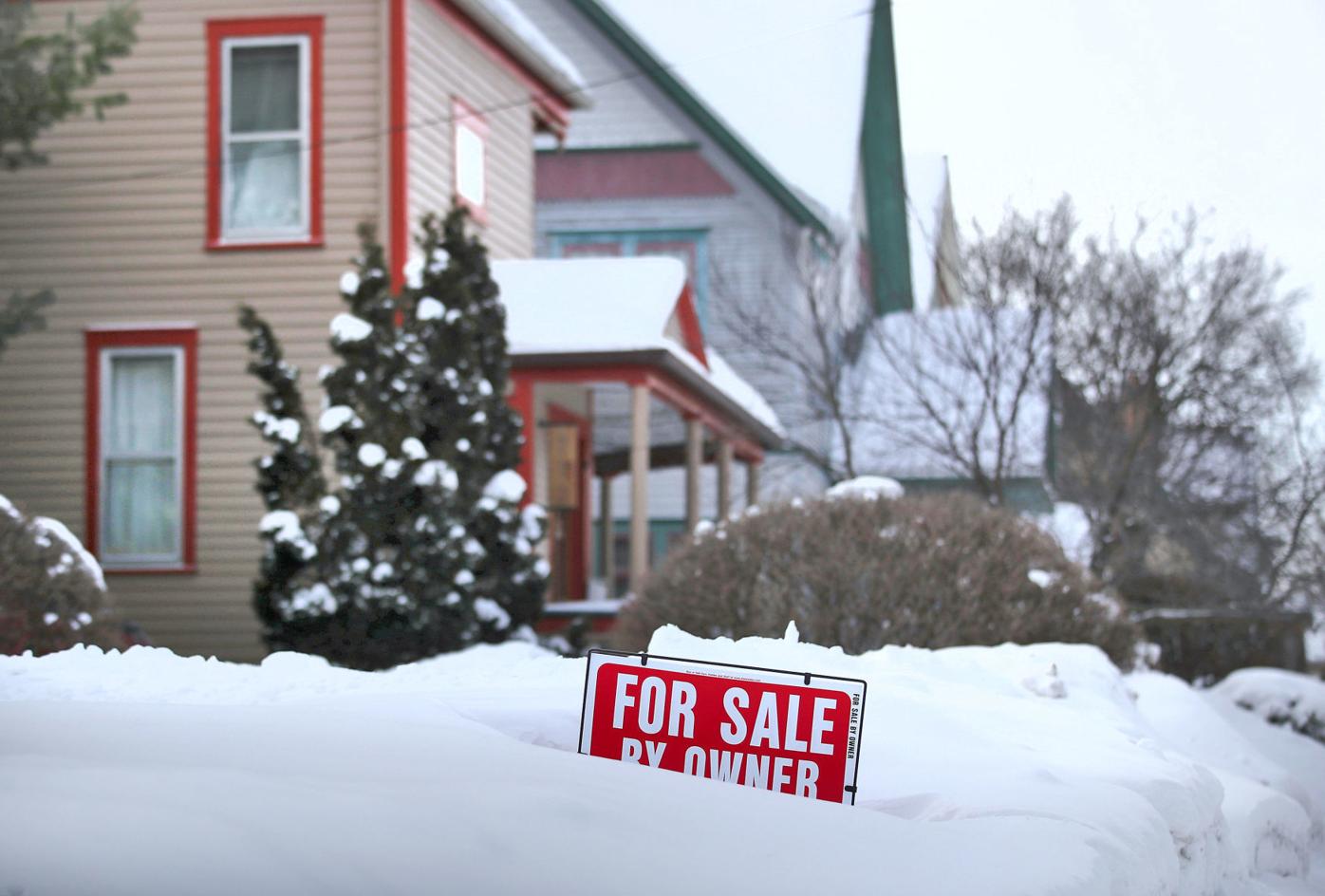 A ‘for sale’ sign sits half-buried in snow at a home along Court Street near downtown Janesville on Wednesday. Despite recent snowy, frigid weather, national and local real estate analysts say Janesville-Beloit’s local housing market is among the hottest in the U.S.

ABOVE: Clayton Gallman, left, and Professor Russ Kashian of the University of Wisconsin-Whitewater Fiscal and Economic Research Center, presented information on the seriousness of the housing shortage in Jefferson County Thursday morning at the Jefferson County Courthouse.

A ‘for sale’ sign sits half-buried in snow at a home along Court Street near downtown Janesville on Wednesday. Despite recent snowy, frigid weather, national and local real estate analysts say Janesville-Beloit’s local housing market is among the hottest in the U.S.

JEFFERSON — People might want to live in places like Watertown, Jefferson and Fort Atkinson, but they are having trouble finding roofs to put over their heads.

The housing shortage, according to an evolving study, is even worse than some local leaders had thought.

An ongoing study being generated by Thrive Economic Development and the University of Wisconsin-Whitewater is revealing just how dire the housing shortage is in the area.

Many counties in the state are living through housing droughts and this is driving up the costs of renting and buying homes.

“Meeting today’s and tomorrow’s housing needs has become an increasingly greater challenge for counties,” Thrive Economic Development leader Vicki Pratt said Thursday in introducing the report, which was presented by Professor Russ D. Kashian of UW-Whitewater’s Fiscal Economic Research Center in the school’s Department of Economics. “Jefferson County is no exception. Having a sufficient supply of housing that meets the demands of households of varying incomes is critical to the economic vitality of our county.”

To better learn about the state of housing in Jefferson County, Thrive commissioned the housing study by the university. The meeting at the county courthouse was conducted on Zoom and was personally attended by audience members, including Jefferson County Administrator Ben Wehmeier. UW-Whitewater student Clayton Gallman also presented a portion of the report along with Kashian.

Kashian said in is introduction that he is a “numbers person,” but that sometimes numbers can obscure facts and realities that people live with. He said in addition to numbers, he is interested in human beings and talked of his impoverished upbringing in a small, working class household in Cudahy.

He said there are tough choices that are being made by people about whether to put groceries on the table or gas in the car.

Kashian and Gallman said home values in the county are increasing due to the shortage of housing. Rents are also on the rise.

Kashian said a husband and wife with two children living with them must have an annual income of $54,000 to live comfortably in the county in 2021.

“Each community in the county needs affordable, workforce housing and we need to help developers make things more affordable,” Kashian said. “Most cities here have affordable housing problems. The problem is worse than we originally thought.”

Kashian said he does not want the study to “gather dust,” but to be used to make the housing situation better in the county’s communities. He said the lack of housing has deleterious effects on functions of school districts and, in the future, incentives should be established to help builders maintain housing inventories.

Jefferson entrepreneur Steve Lewis, who operates the Jefferson Area Business Center on the west bank of the Rock River in downtown Jefferson, said his research has indicated that there are just three weeks of housing inventory in the city.

“There are two houses for sale in Fort Atkinson right now and the housing problem is worse now than your numbers even indicate,” Lewis told Kashian.

Watertown Mayor Emily McFarland acknowledged the housing shortage in the city she leads.

In an interview following Thursday’s meeting, she said the shortage affects many aspects of life in the city, including the local economy, so housing has been a priority of hers for the past few years.

“Our comprehensive plan has detailed population and housing projections, and those, in conjunction with the needs of our employers, brought housing development of all kinds into focus a few years ago,” she said. “The data presented today substantiates the importance of our continued focus on attracting housing developers. I recently had a conversation in which I said housing is an important part of our economic development plan. Our employers need people and those people need housing that they can afford. We can’t just start in the middle of that cycle.”

McFarland said the city has been fortunate to be able to continue working with a few housing developers that have done what she called “outstanding projects” in the city in the past.

“So we’re hopeful that we can continue working with them and grow additional relationships,” she said. “Our focus is on a variety of housing types, including multifamily; demographic-specific housing and small, single family.”

Waterloo City Clerk/Treasurer Mo Hansen said he was not surprised by the findings produced by the UW-Whitewater team.

“Mayors, municipal administrators and elected officials in Jefferson County are acutely aware of housing challenges. They live with them every day,” Hansen said. “But with every challenge, there is genuine opportunity. The quantity and quality of residential developers are important pieces. We need to welcome reputable home builders. A skilled home building workforce receiving family-supported wages is important. Private-sector employers, big and small, focusing on housing as a vital employee recruitment tool, is essential.”

Hansen also said housing is a key pillar supporting the overall quality of life in Waterloo.

“The high residential land prices long locked in, in places like Waukesha and Dane counties, have not yet fully gripped our county,” he said. “Concentrated efforts at the municipal level, now, can reap dividends for our communities for years to come. In Waterloo, we understand that. We get it. In the long-run, housing prices cannot exceed the wages of working families. Economic vitality is a complex, ever-changing dynamic. There needs to be a functional balance — household incomes need to grow to support quality housing.”

“(The report) should be part of the process for making decisions in the future,” Kashian said. “The point is, if you have needs, come to us, because the housing problem here is worse than we thought.”