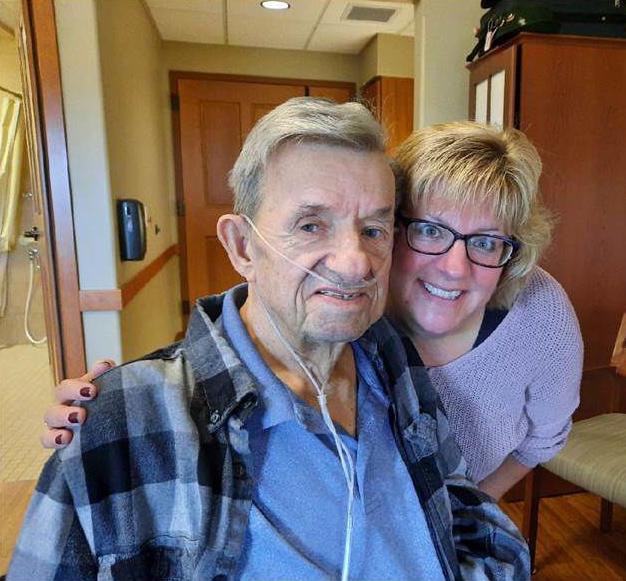 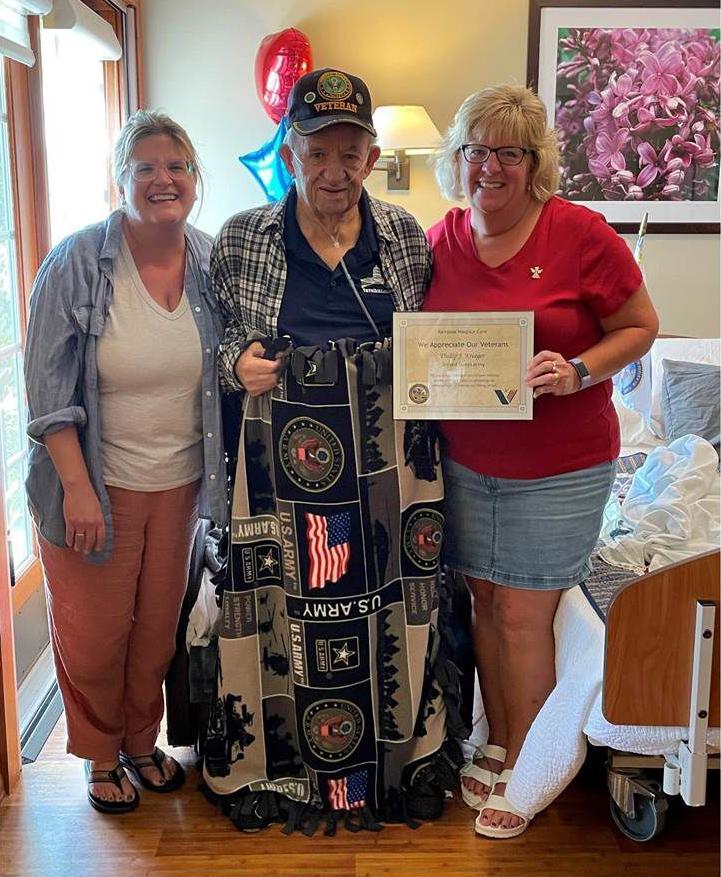 Phil with his daughters, Mary on the left and Sarah on the right, after his veteran pinning ceremony. 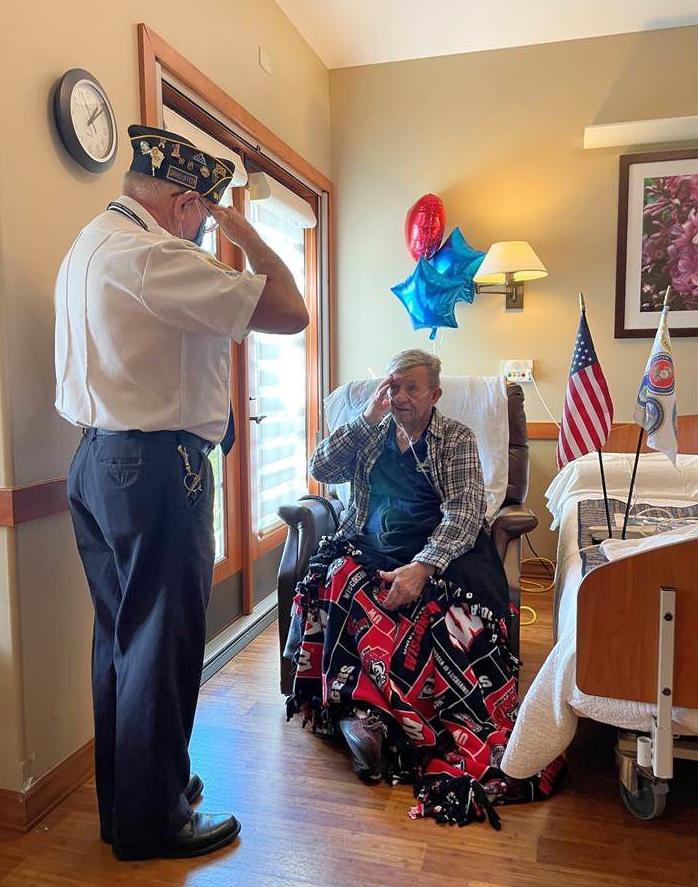 Phil being saluted by one of Rainbow’s veteran volunteers, John Phillips.

Phil with his daughters, Mary on the left and Sarah on the right, after his veteran pinning ceremony.

Phil being saluted by one of Rainbow’s veteran volunteers, John Phillips.

JOHNSON CREEK — When Phillip Krueger enlisted in the United States Army at age 22, he wasn’t sure where his journey would take him.

The year was 1960, and Phil had just finished two months of basic training in Fort Leonard Wood, Missouri, where he became skilled in military communications.

He thought he probably would end up staying in the Midwest.

“They were taking applications for Illinois, Michigan, Minnesota, and Wisconsin, and they asked which one of those states I would like to go to and I said Michigan,” said Krueger.

But Phil soon found out he wouldn’t be going to Michigan after all. The last place he was expecting to be sent though was somewhere over 3,000 miles away.

“They tipped Michigan upside down and made Alaska out of it, I guess,” Krueger said.

While he was there, Phil worked as a switchboard operator to link up communications for units in the battle group throughout Alaska.

“We would go out in the field and I'd have all those companies switched into my board and I would supply that communication for them,” Krueger said. “I spent six months out there with line companies that were doing exercises on glaciers … glacier training.”

One of the downsides of being in Alaska, was the unpredictable Alaskan weather, with long periods of freezing to subzero temperatures, and lots of snow. That was enough to make any soldier want to retreat and find some momentary relief.

“We had certain boots and big heavy snowshoes so we were comfy,” Krueger said. “But it was also uncomfortable jumping in a sleeping bag with all your clothes and shoes on. You feel like you’re stuffed inside a baloney.

“We had a field trip we took and it was 60 below zero,” he added. “And we had to supply our own heat. You try digging through two feet of snow for some dried branches. That’s not easy.”

During that time, the Cold War rapidly was heating up around the world between the United States and the Soviet Union. The shortest and most likely route of an attack from the Soviet Union was through Alaska, so it became America’s first line of defense and a perfect location for early-warning radar systems and the best place troops could train for ground and air combat to simulate weather conditions in the Soviet Union. In 1961, an attempt to overthrow Fidel Castro and the growing Communist threat in Cuba ended with a failed Bay of Pigs invasion.

By October 1962, the world was on the brink of nuclear war when U.S. surveillance planes detected that the Soviets had begun to place long-range nuclear missiles in Cuba, just 90 miles off Florida’s coast. Not only could those missiles reach the United States, but it was estimated those missiles could kill 80 million Americans within minutes.

In what became known as the Cuban Missile Crisis, the U.S. then opted to set up a naval blockade on Cuba to prevent more offensive weapons from entering the country. Eventually, a tense 13-day standoff with secret negotiations ended without any military action, and the Soviet Union agreed to remove their missiles as long as the U.S. agreed to never invade Cuba again.

Thankfully, that situation never escalated to the point of any military combat missions for Phil while he was stationed in Alaska. But his job in communications and on the switchboard kept him busy and gave him a chance to see and experience the picturesque Alaskan frontier filled with gorgeous scenery and wildlife.

“Alaska was a nice clean state and you could do just about anything you wanted up there because there was not that much action,” Krueger said.

Phil still remembers the marching drills he and his fellow soldiers did around the camp carrying their M1 rifles and wishes they could have practiced that more. He enjoyed getting to know the guys in his group who were from all over the country.

“We had to make it a guys’ thing, so we’d go to clubs and the dancing on weekends to amuse ourselves and the beer was much cheaper then,” Krueger said.

When there was downtime, Phil found another way to make some extra money on the side.

Phil wrote lots of letters back and forth to his girlfriend Sharon. They first met at a birthday party in Johnson Creek and then their relationship blossomed when he asked her out to go dancing in Ixonia a week later. They dated for about a year before he joined the Army.

“How Sharon could wait that long for someone is beyond me,” Krueger said.

But Sharon did wait. Once Phil returned home to Wisconsin, it wasn’t long before he and Sharon were married in September 1964.

Phil then started working in carpentry, had a little stint hanging ceiling tiles at the former Northwestern College in Watertown, and also had a job at Heavy Duty. He also helped his in-laws work their farm.

Having been born and raised on a farm in Lebanon, farming was his first love. That’s what gave Phil the desire to run his own farm and that’s what he did for over 20 years. In 1973, Phil and Sharon moved into that same farmhouse that Sharon grew up in, and there raised their two daughters, Sarah and Mary.

When he decided to give up farming, Phil got a job at Target Distribution Center in Oconomowoc and also worked as a head custodian at Park Lawn Elementary School.

When he was cleaning up in the cafeteria one day he noticed some children were not receiving hot lunch because their parents couldn’t afford it. He and his wife Sharon decided they wanted to help somehow and decided to “adopt” a family with three children to make sure their school lunches were paid for the rest of the school year.

“It started out as just lunch and then it escalated,” Krueger said. “We started with only 100 dollars.”

That led to other staff members stepping up and donating some money and the cause became known as the “Phil Fund.” Besides free lunches, the fund also provided Thanksgiving, Christmas and Easter meals to working families. It wasn’t long before Christmas presents, winter clothing, gift certificates to local grocery stores, and money for medical bills, medications and doctor visits also were added to the mix.

The Phil Fund no longer exists today but it helped increase school and community involvement, and inspired others to step up and give back to make sure children didn’t go hungry. Back in the late ’90s and early 2000s, free and reduced lunches for students didn’t exist in every school district. That’s why Phil’s job at Park Lawn Elementary touched his heart the most.

“That’s one of the best feelings there is, to help others,” Krueger said.

Phil lost his wife Sharon to an illness in 2015 and he helped care for her before she passed away. After that, Phil still had a passion to help others and decided to volunteer for the Watertown Unified School District in the elementary school buildings with the Ready, Set, Read! Program to help children with their reading skills.

“By serving in the Army, my dad was exposed to all different nationalities,” said his daughter, Sarah Miller.”

By being with people on base and with all the new people he met, he learned what giving, sharing and working together is all about.”

Phil has been battling lung cancer and when his health began to decline he didn’t want to leave his farmhouse that was full of special memories, but he knew he needed more care.

“We found out in December that the cancer had spread to the fluid around his lungs and at the end of August he got a little bit weaker,” Miller said.

Rainbow Hospice Care stepped in to provide home hospice service in August and then a month later, after talking it over with his family and Rainbow social worker, Emily Marx, Phil decided to come to Rainbow Hospice Care’s Inpatient Center (IPC) in Johnson Creek.

“What brought me here (to the IPC) faster was a wheelchair,” Krueger said. “I lose less oxygen if I’m just sitting in a wheelchair and it was easier breathing.”

“For him to go from point A to point B was too much work on his lungs and for his heart,” Miller said. “He would be huffing and puffing. Dad said he was ready for that step to get more care.”

Phil moved into the IPC in September so he could receive around-the-clock care. It’s also close enough for Sarah and her family to visit Phil multiple times per week.

The IPC still has some of the comforts of home and Phil also developed a closeness with Rainbow’s Bereavement Counselor Laura Wessels.

“One day I was like, we’ll I’m going to come and meet who this Laura is because dad was like, ‘we had a really nice visit and had communion,’” Miller said. “Laura has been amazing, the top of the list.”

“I’m inspired by how Phil has lived life fully, caring for and celebrating others, especially his two daughters and his four grandchildren,” said Wessels. “He has truly lived a life of service.”

Phil certainly has been a hero in more ways than one, not just for his military service but the way he’s been giving back his whole life to his family, friends, neighbors and his community. A few days after Phil arrived at the inpatient center the staff surprised him with a special veteran pinning ceremony. Rainbow volunteer John Phillips, also a veteran, pinned Phil and gave him a salute and tribute for his service in the United States Army.

“Dad had no idea that it was going to happen,” Miller said. “He is honored to have served his country and he was very humbled that others were thinking of him. Dad’s pin for his service we put on his veteran's cap and he has that with him in his room.”

Sarah, her husband Rob, and her sister Mary were there to witness the pinning and each received an angel pin, a patriotic-themed pin given to those that are special to a veteran patient being honored. Phil also received a fleece Army blanket that is sewn and tied together by several of Rainbow’s volunteers.