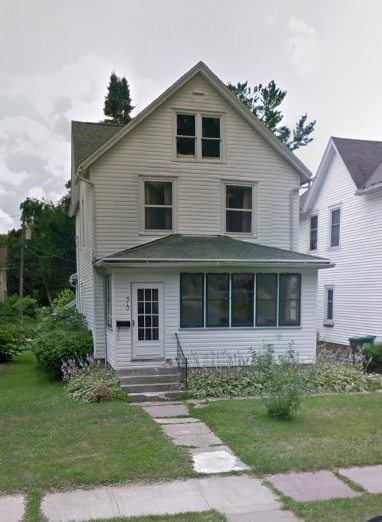 Daily Union reporter Pam Chickering Wilson's childhood home today, minus the green shutters that set off the home at the time she lived there in the 1970s and the fruit tree that once blossomed in the front yard. 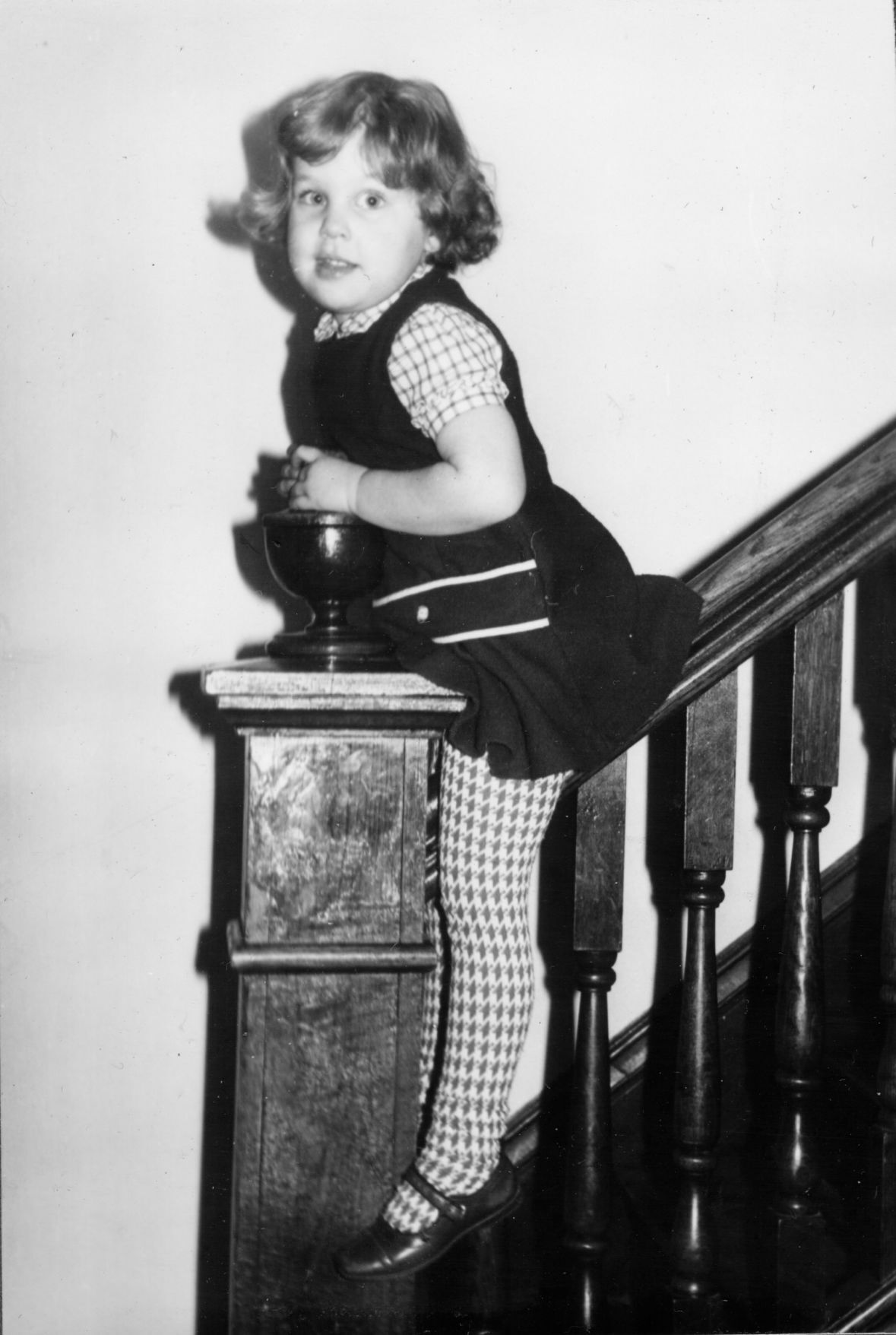 Daily Union reporter Pam Chickering grew up in this home in Baraboo, minus the green shutters that set off the home at the time she lived there in the 1970s and the fruit tree that once blossomed in the front yard. At right, she is perched on the distinctive banister, next to the newel post. 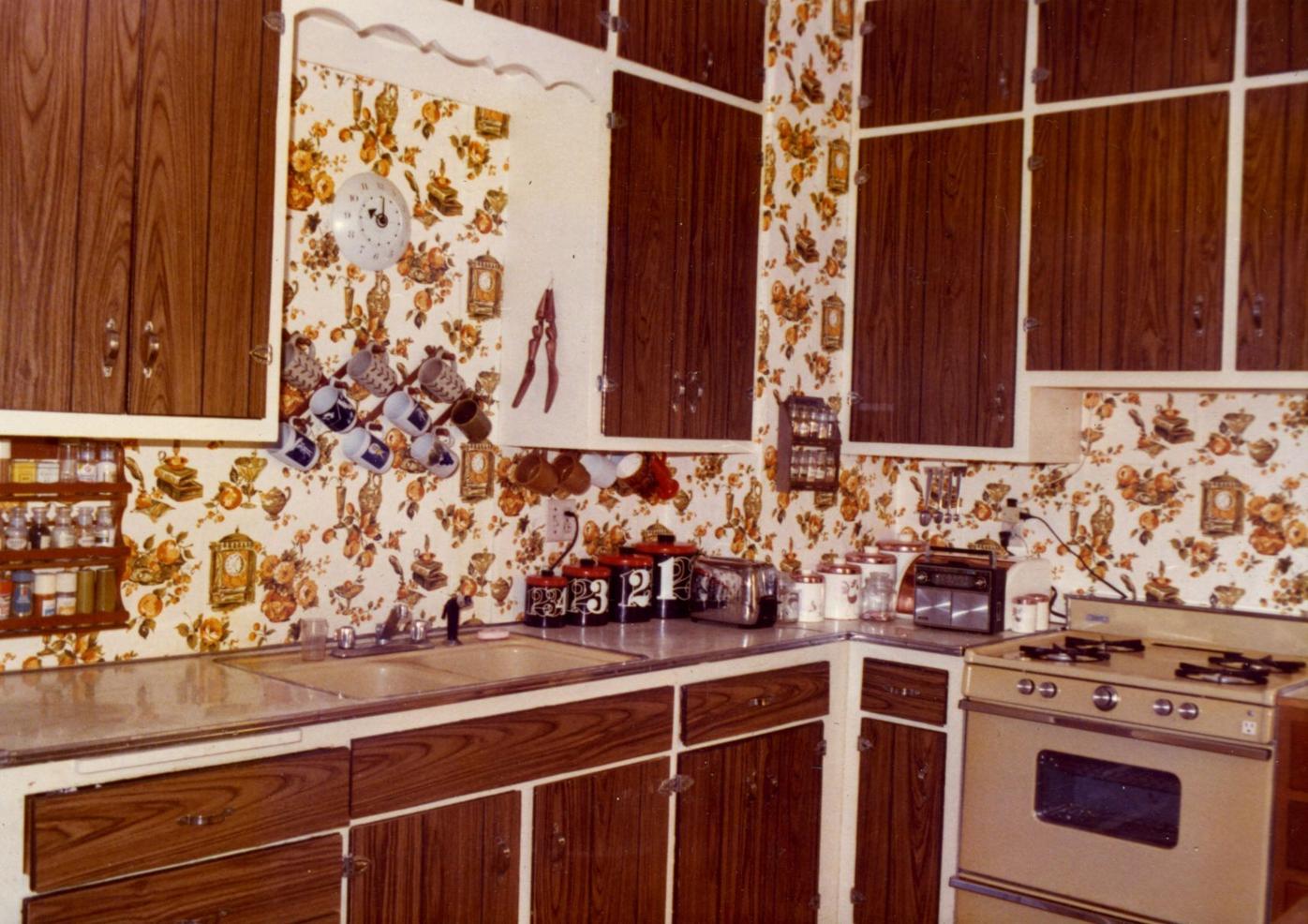 The kitchen of Daily Union reporter Pam Chickering Wilson’s childhood home circa 1972. The wood paneling cupboard fronts, large print wallpaper, harvest gold appliances and black and orange canisters may look hideous today, but these styles were all the rage at the time.

Daily Union reporter Pam Chickering Wilson's childhood home today, minus the green shutters that set off the home at the time she lived there in the 1970s and the fruit tree that once blossomed in the front yard.

Daily Union reporter Pam Chickering grew up in this home in Baraboo, minus the green shutters that set off the home at the time she lived there in the 1970s and the fruit tree that once blossomed in the front yard. At right, she is perched on the distinctive banister, next to the newel post.

The kitchen of Daily Union reporter Pam Chickering Wilson’s childhood home circa 1972. The wood paneling cupboard fronts, large print wallpaper, harvest gold appliances and black and orange canisters may look hideous today, but these styles were all the rage at the time.

This is part of a periodic series of columns by Daily Union reporter Pam Chickering Wilson, sharing her experiences in getting the most out of life without going broke.

This column was inspired by a “Write Your Story” group hosted by the Jefferson Area Senior Center as part of its pandemic-era teleconference series. Participants were asked to write about their childhood homes.

The first childhood home I can easily remember was a tall white-painted house built in the late 1800s and located at 510 2nd St., Baraboo.

While it was modest in size and appearance, a couple of lovely details made it stand out: the prism glass pieces inset in the front window that sprinkled rainbows across the living room in the mornings, and the elegant polished wooden banister that flanked the stairway to the second floor.

This banister provided the backdrop for many a Christmas photo — taken in July, because all of my mom’s film had to be shipped out and processed elsewhere, then later made into cards. We’d wind tinsel garlands and greenery through the balusters, accent with red velvet ribbon, and then don our Christmas finery for the photo, all while birds twittered in the green leaves outside.

The three-season front porch at the front of our house was the site of many a rummage sale during my youth, for which my mom would meticulously mark my sister’s and my outgrown clothes at 5 cents, 10 cents and 25 cents for the best outfits. She could not understand the occasional “bargain hunters” who tried to drive the prices further down.

The hallway which edged the banister led to the kitchen in the back of the house, with its handpainted built-in cupboards. I regularly climbed these like a jungle gym to get at the cereal as I wasn’t tall enough to reach.

My strongest memory of this room comes not from the many meals we shared here, but of my mother painstakingly hand-drawing a full-size billboard she’s been hired to create for some Bicentennial celebration in 1976. She got woozy midway through the task — someone should have warned her that utilizing permanent markers for hours at a time while bending over the kitchen table in close quarters was hazardous to one’s health.

Off the kitchen stood the lower level bathroom my dad had added in what must have been a former pantry or storeroom. Going the other direction, you could round the corner to the den, which served as the office for my mom’s home-based photography business.

Looping through the den would bring you around to the front room again, with dancing rainbows coming through its prismatic windows.

Heading upstairs, my room was the first off the hallway, with an iron-framed bunk bed that was very hard on the head should you shift around too much at night. It also had no rails, so a sleeper had to be very sedate — or tucked in tightly — lest they fall out of the top bunk.

My room had one southern-exposure window, through which the out-of-tune hoots of the circus calliope would sound all summer long from Circus World Museum two blocks away down the hill.

At night, moonlight and an alley streetlight coming through this window would cast a strange pattern of light and shadow on my wall that resembled a crooked skull.

I remember eyeing this pattern warily late into the night, trying to convince myself that it was not spooky at all; rather, the skull was Tom Sawyer’s ghost come to keep me company.

Across from my room was my parents’ bedroom, the largest in the house, with its big bed, deep closet and a small black and white television, which never did come in very well, on the bedside stand.

On weekends and during the summer (when my dad had months of free time while the school he taught in was out of session,) I delighted in rushing into the room to wake my parents up before they were really ready to rise.

(Little did I know that by the time I was a teen, my dad would delight in returning the favor, notoriously waking me up at 9 a.m. by pretending I had slept until noon. Apparently his dad had once done something similar, playing extremely loud Mexican music at 6 or 7 a.m. to assure that everyone on the farm was awake in time for chores.)

A lasting memory I have centered in my parents’ room was the mystery of the buzzing wall, which we eventually learned heralded the establishment of a huge nest of hornets inside the wall.

We had to eradicate the colony by creating a small hole in the wall, then filling the wall with insecticide via an old tank vacuum cleaner set to blow out instead of sucking in. Then we reversed settings and vacuumed up all the dazed and dying insects – scary and fascinating.

At the end of the upstairs hall was a small bathroom with a tub, and in the northwest corner of our cramped second floor was my sister’s bedroom — the smallest in the house.

I don’t remember much about the furnishings, but I do remember playing hide and seek in her dark but fairly expansive closet. One time we hid so well, back behind the clothes and storage, that we couldn’t find our way out and got quite upset before realizing that the dresser that usually stood to the side had gotten pushed in front of the doorway, blocking it.

Our house also had a tiny, fairly inaccessible attic and a traditional cellar. No, not a finished “lower level” or even a regulation “basement” with smooth cement floors. This was a cellar, with walls of rough stone and dirt floors.

I did not like it down there, except for the room right at the bottom of the stairs, lit only by red right, which served as my mom’s photographic darkroom. In this eerie illumination, I liked to watch the magic of images appearing from nothing as my mom’s developing photos went through a series of mysterious chemical baths and were hung up to dry on a modified clothesline.

Our yard was small, but in typical 70s fashion, my sister and I did not confine ourselves to playing on our own property. Like other youngsters of the time, we traveled all around the neighborhood, benefiting from the era’s much looser rules about where children could go and how long they could be gone.

“Go out and play,” was a common command of mothers (I knew of many “housewives,” but no stay-at-home dads) at that time. Parents didn’t expect children to stay in the yard or even to report back within an hour or two. Unless otherwise specified, the assumption was that anytime ahead of supper — or when it got dark, whichever came first — would be fine.

As a result, I had free rein throughout our neighborhood. I got to know every single neighbor all around our block and a number of those across the street. I wandered through yards and knocked on doors without compunction.

My dad was involved in community theater, and I had the privilege of attending rehearsals from a very young age. Entranced by the costumes, music and spectacle, I’d often memorize the full script.

I recall going door-to-door in my neighborhood at the age of barely 3, boldly asking everyone “Do you want to hear me sing ‘Brigadoon?’”

(What these long-suffering neighbors did not realize is that I didn’t refer to the title song of the musical — I meant the entire musical, which I’d perform song by song unless stopped.)

The neighbors were surprisingly accommodating. Several were quite elderly, and perhaps they didn’t get many visitors.

Among the most memorable were a white-haired couple who never failed to give me hard candy when I visited; a pair of sisters in their 90s who lived on the corner, and a lady with an artificial voicebox whose gravely, mechanical voice fascinated me.

This environment served as the backdrop for many adventures in my preschool and early elementary years Then at the age of 7, I was uprooted from our comfortable neighborhood to move to the country — a whole new adventure that deserves its own column.