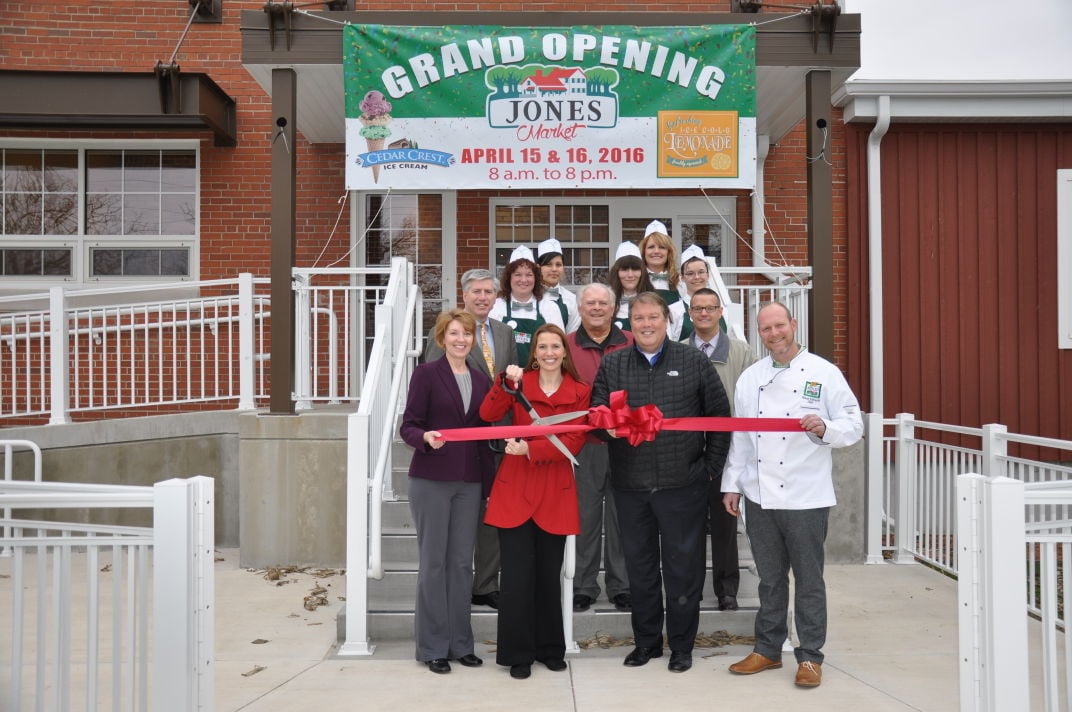 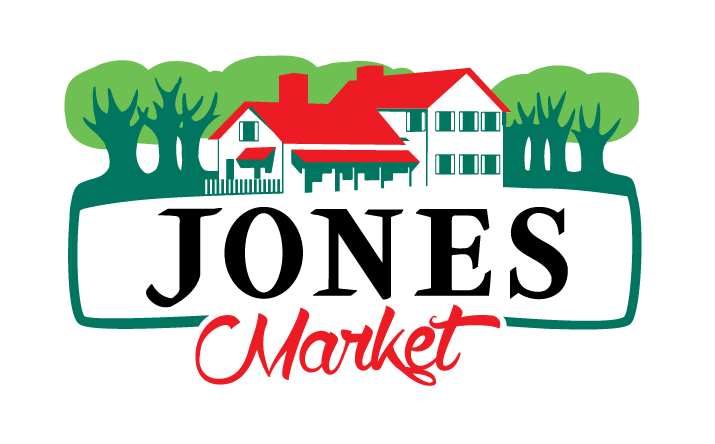 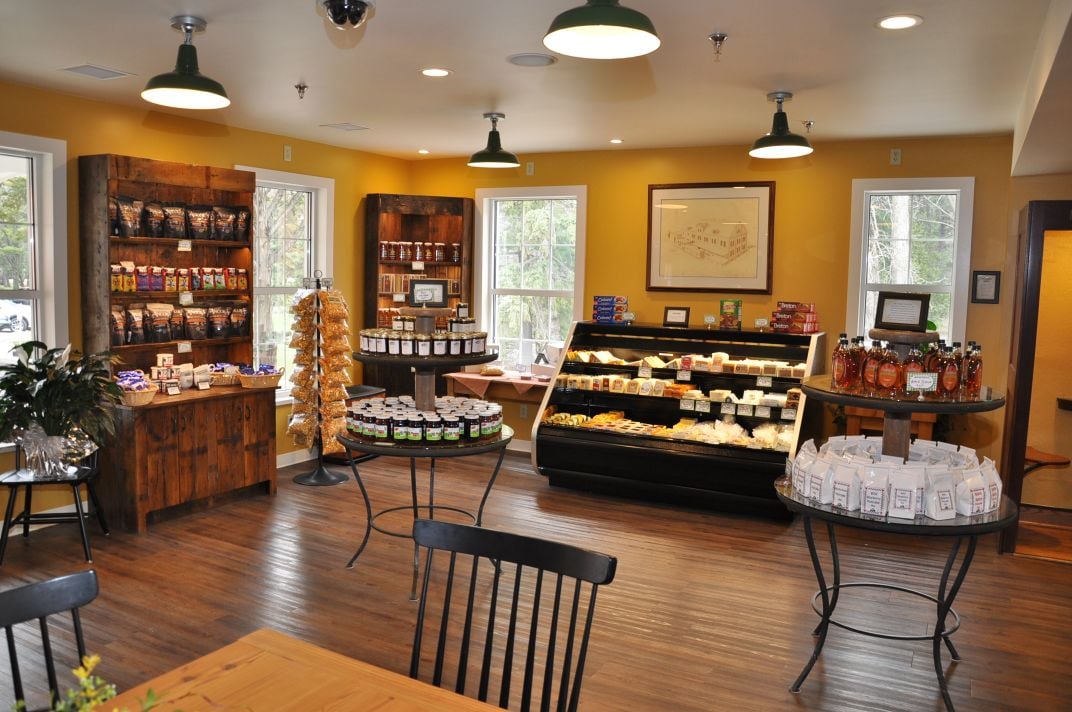 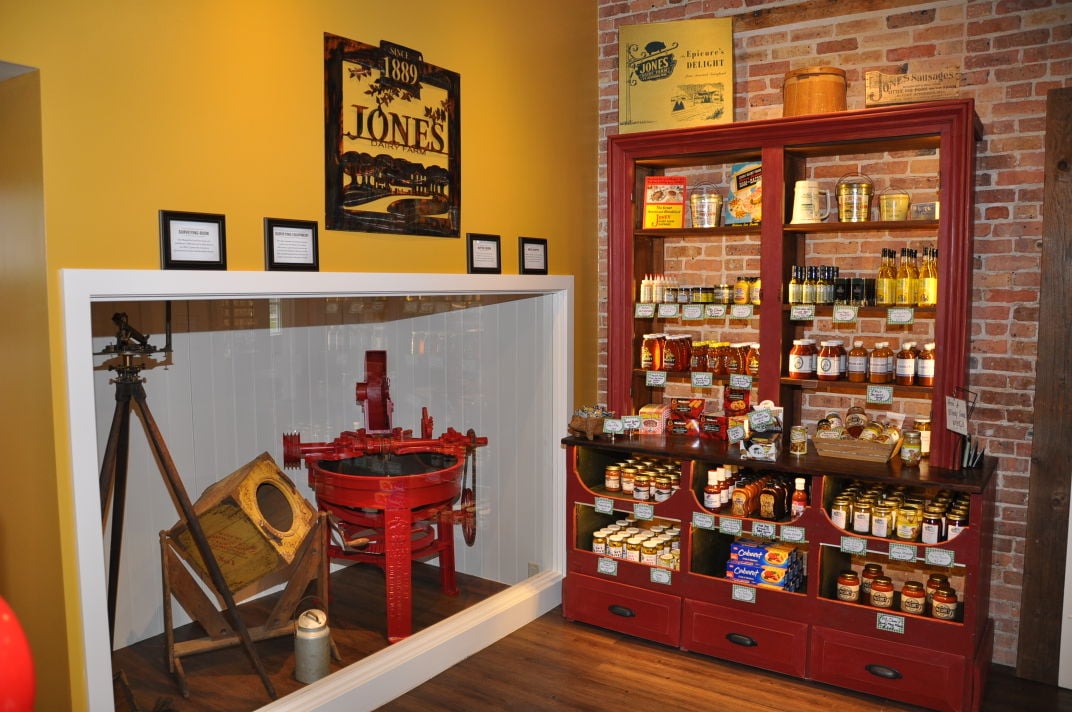 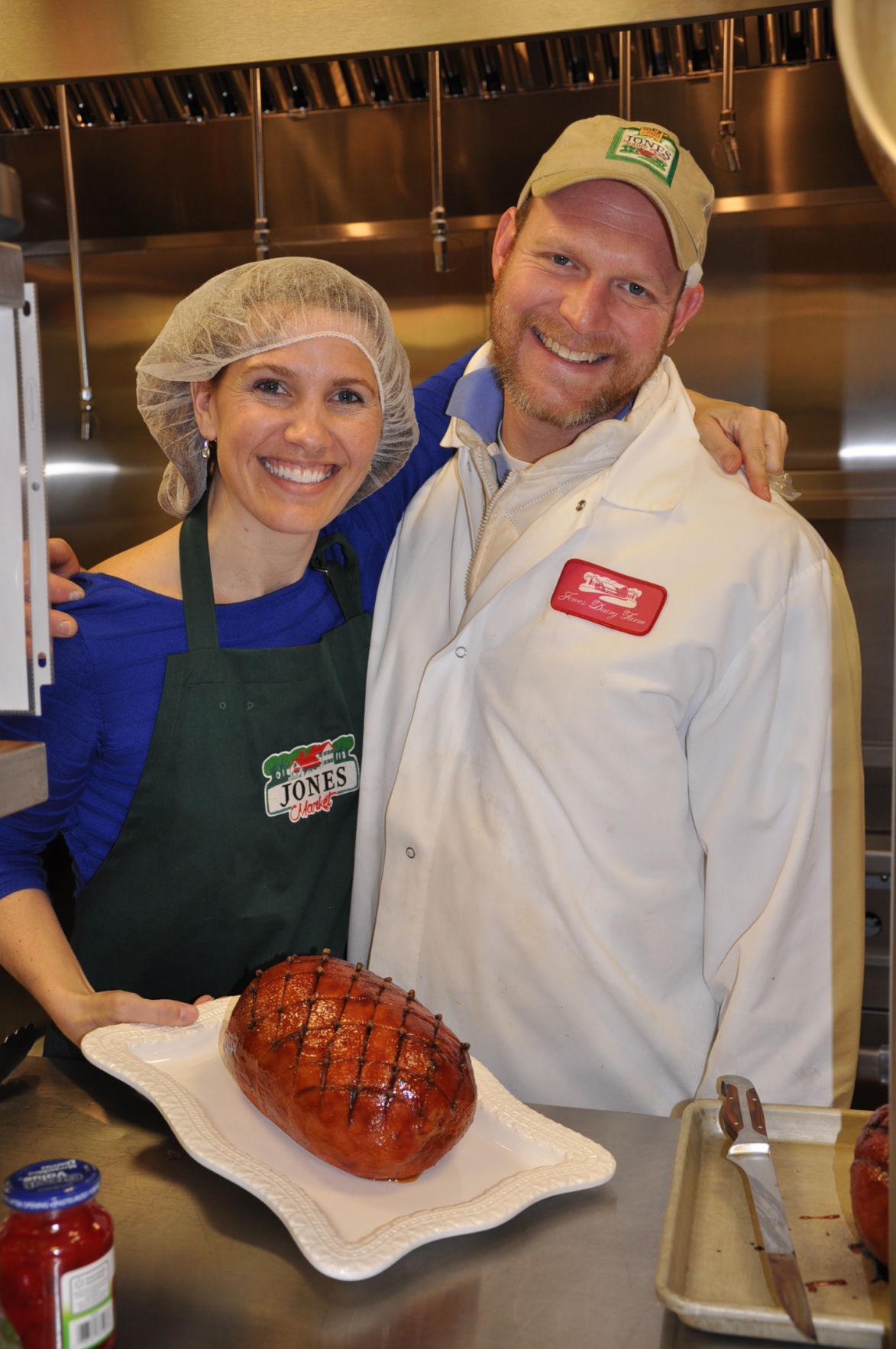 KEEPING UP WITH THE JONESES — A newly renovated Jones Market, featuring access off the Glacial River Trail, is hosting a grand opening on April 15-16. Pictured here are views of the new space, where a ribbon-cutting ceremony was held Monday. Above, Jones Market sales and marketing manager Mariah Hadler and Jones Market chef Shaun Edward display a Jones ham.

KEEPING UP WITH THE JONESES — A newly renovated Jones Market, featuring access off the Glacial River Trail, is hosting a grand opening on April 15-16. Pictured here are views of the new space, where a ribbon-cutting ceremony was held Monday. Above, Jones Market sales and marketing manager Mariah Hadler and Jones Market chef Shaun Edward display a Jones ham.

For the past 127 years, one Fort Atkinson family’s sausage recipe has been enjoyed by people around the world. From breakfast sausages to Christmas hams, serving a meal with Jones Dairy Farm products conjures up warm memories of close family gatherings.

Now, tourists and residents alike may enjoy the homey atmosphere of the family-owned business while purchasing a variety of products at the newly expanded and remodeled Jones Market.

Located on the Jones Dairy Farm property in the same location as the former Jones Retail Store, the new Jones Market pays homage to the Jones family that settled in Fort Atkinson in the 1830s.

Items on display throughout the market have historical significance to the Jones family, including Milo C. Jones’ wicker wheelchair; a cabinet from the Green Mountain House, Fort Atkinson’s first inn built by the original Milo Jones; a door from a S.H. Harris Company safe from Chicago that had been in the bookkeeping room of the pork-processing plant; a restored time clock from the plant that was used from 1906-52, and much more.

Above the deli counter is a meat rail that formerly transported hog carcasses from the time of slaughter to processing throughout the plant.

The Jones Market offers the company’s entire product line, including favorites such as breakfast sausage, dry-aged bacon and naturally smoked hams, as well as large selection of specialty food items from around the Badger State.

Nearly four times larger than it was previously, the market has expanded its offerings to include many exclusive items, like fresh brats, Italian sausage and sausage meatballs.

“Basically, anything we make, you can order in the store,” Jones Market sales and marketing manager Mariah Hadler said. “The Jones Market has become a destination of its own because of the extensive product offerings, the unique historical items on display that have passed down through the years by the Jones family, and the delicious sampling that takes place every day, all day long.”

Starting in May, Hadler anticipates it to offer a small breakfast menu of just a few quick breakfast sandwiches. Options remain in the product development stage, and at the start, that might be limited to Saturdays.

“The Jones Market is a real treat for the entire family,” she said.

A grand opening celebration of the expanded Jones Market will be held Friday and Saturday, April 15 and 16, from 8 a.m. to 8 p.m.

Hadler credited Philip Jones for coming up with the concept of having the market offer ice cream and promoting its proximity to the Glacial River Trail.

“We just wanted to set ourselves apart from the other soft-serve options in town,” she said, noting that this offers an opportunity to feature another Wisconsin-based family-owned business in the market.

One of Cedar Crest’s owners and his son will be at the Jones Market to help scoop ice cream during the grand opening celebration.

Hadler said a variety of sundaes with varied toppings will be available.

“You can get bacon on top of anything,” she quipped.

Product sampling and demonstration stations will be set up throughout the day and product giveaways will take place every 15 minutes. Plus, there will be a drawing for a free year’s worth of Jones sausage.

To kick off the celebration of the completed expansion and remodeling, the Fort Atkinson Area Chamber of Commerce and City of Fort Atkinson on Monday recognized the Jones Market with an official ribbon-cutting ceremony.

“It’s fun to see Jones Dairy Farm come full circle, returning to their dairy roots and selling ice cream,” chamber Executive Director Carrie Chisholm said. “Their retail store is a big attraction for locals and Fireside (Dinner Theatre) tour groups, and now they have the space to accommodate visitors along the bike trail. Every investment in their business is also an investment in Fort Atkinson.”

“It’s great to see the Jones Dairy Farm family continue to invest in the community and expand their marketplace here,” he said. “Taking a look around and seeing what they’ve done in here, it’s just amazing.”

The market has a loyal following of Fort Atkinson-area residents who stop by almost weekly and often call to find out the special of the week.

The original space utilized for the Jones Market was built as an office for founder Milo C. Jones, the son of the Milo Jones, the surveyor who came from Vermont in 1832 and was among the original founders of Fort Atkinson.

Milo and Sally Jones’ son, Milo C. Jones, was crippled in his early 30s with rheumatoid arthritis. Wishing to continue a productive life, he struck an idea of using his mother’s recipe to produce sausage commercially.

Chicagoans spread the word to the East Coast and Jones Dairy Farm and its “Little Pig Sausages” were on their way to their current international reputation.

Hadler noted that the original farmhouse in which the business started still is featured on the packages and in Jones Dairy Farm commercials to this day.

Outgrowing the farmhouse, the company built the original plant along Janesville Avenue in 1906.

Due to Milo C.’s physical limitations and being confined to a wheelchair, the street-level space later used for the Jones Dairy Farm Retail Store originally was built as his office.

She said that over time, it was used as a mending room for employee frocks, aprons, hats and other production apparel. The space also was used as a women’s locker room before becoming a retail outlet store to assist in making use of seconds and byproducts of manufacturing.

The original retail store is believed to have been opened circa the 1950s, as a venue for employees to purchase Jones Dairy Farm products. However, Hadler pointed out there is no clear record as to when it debuted.

With the renovated space and expansion, the Jones Market has nearly quadrupled its original size.

The current deli area was the main shipping room in the plant until the 1964 addition was built and the sausage operations were relocated to the current plant next door.

Hadler noted that the ice cream area was an open-air railcar loading dock to the Chicago Northwestern Railroad. The tracks that once were adjacent to the plant now have been replaced by the Glacial River Trail bike path. That area of the plant later became a men’s locker room.

Large doors that separated the spaces previously were retained during the renovation; however, she said they were unable to come up with concepts of how to utilize them in the existing space.

“The whole downstairs of this building has been repurposed,” Hadler said.

Hadler noted that it was company President Philip Jones and his father Edward (Ted) Jones for having the vision of the product development center to help grow the business.

Over its 127 years, many developments have been made in food technology — developments that make production faster and cheaper.

However, in that time, Jones Dairy Farm has resisted adding anything artificial to its sau­sage recipes, Hadler said. That philosophy applies to the company’s full range of products, including bacon, ham, Canadian bacon, turkey sau­sage, turkey bacon, braunschweiger and scrapple.

Chef Shaun Edwards has been instrumental in developing new product offerings that now, with the development center being part of the original plant, first are offered to customers through the market before making a determination to move production to the main plant.

Production in the original plant stopped in 2008 when an addition was completed on the current manufacturing facility.

“When we closed down this manufacturing facility here, we finally had a way to do two things we always wanted to do: one was to develop the product development center and the second thing was to expand our retail store,” Jones Dairy Farm Executive Vice President Rick Lowry said.

He pointed out that the Jones family has a history of repurposing historical items, citing their support of the recent renovation of the Fort Atkinson Club and restoration of the 1901 watertower.

“They are a very old-fashioned family that doesn’t believe in throwing things away, and if they can be used for another use, they are going to figure out how to do it,” Lowry said.

He acknowledged that the less-expensive option would have been to demolish the original plant. But that simply is not the Jones family way.

“There is just a lot of history here,” Lowry said.

All throughout its history, Jones Dairy Farm has been a family business. Since 2001, it has been led by Philip Jones.

Lowry noted that most family businesses don’t make it past the third generation because of the simple premise that it becomes “all about me” and not the needs of the business. However, he said the Jones family always has put their employees first.

“That is why you survive,” Lowry said. “You think less about the things you want personally and more about what the employees need.”

The family-owned business, has a long history of being committed to the community.

The Jones family was recognized with the chamber’s 2004 Economic Contribution Award and the business itself was honored in 2016.

Since 1990, the American Meat Institute has presented the Edward C. Jones Community Service Award to an individual who has led his or her company in volunteer efforts that enhance the communities in which the company and its plants reside. Philip Jones was recognized with the award, named after his grandfather, in 2014.

Jones Dairy Farm supports the chamber’s Project LEAD endeavors and its New Teacher Welcome, and its employees volunteer for Rhythm on the River, the chamber board and community organizations such as Tomorrow’s Hope, the Boys & Girls Club of Fort Atkinson and the United Way of Jefferson and North Walworth Counties. Also, the company provides rent-free operating space for the Fort Atkinson Food Pantry.