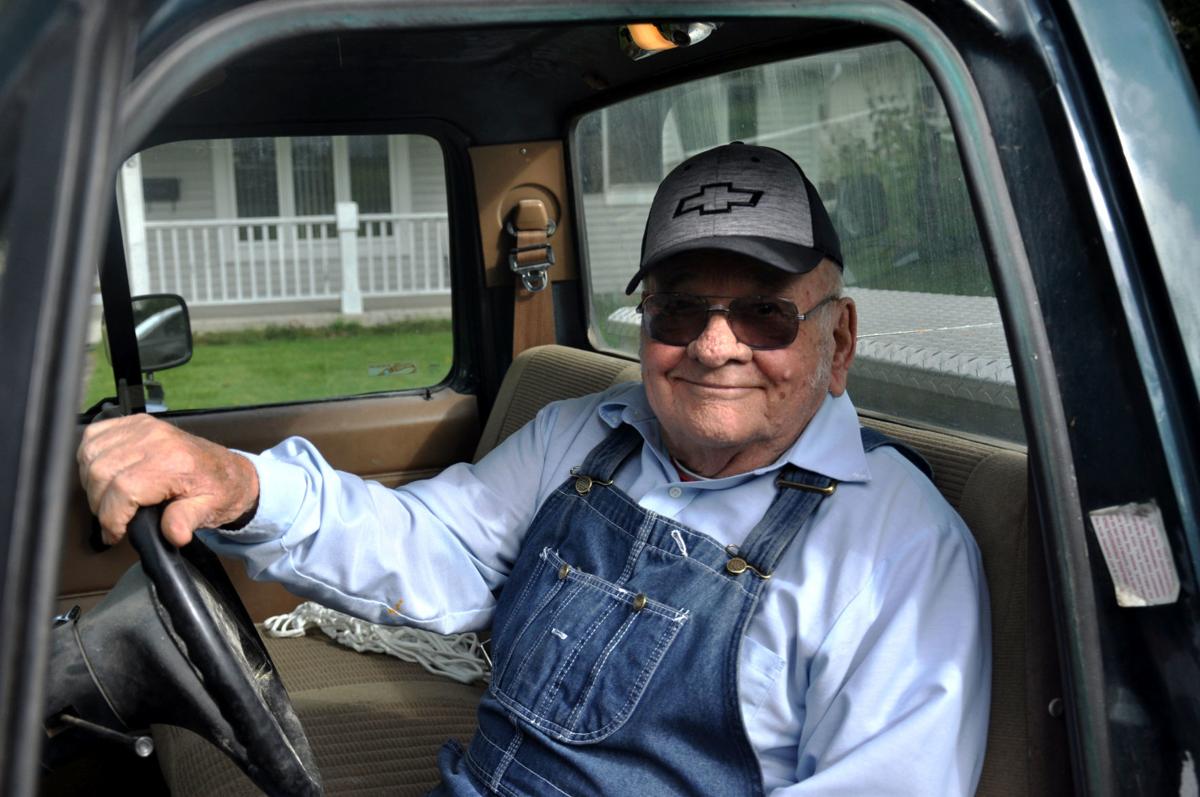 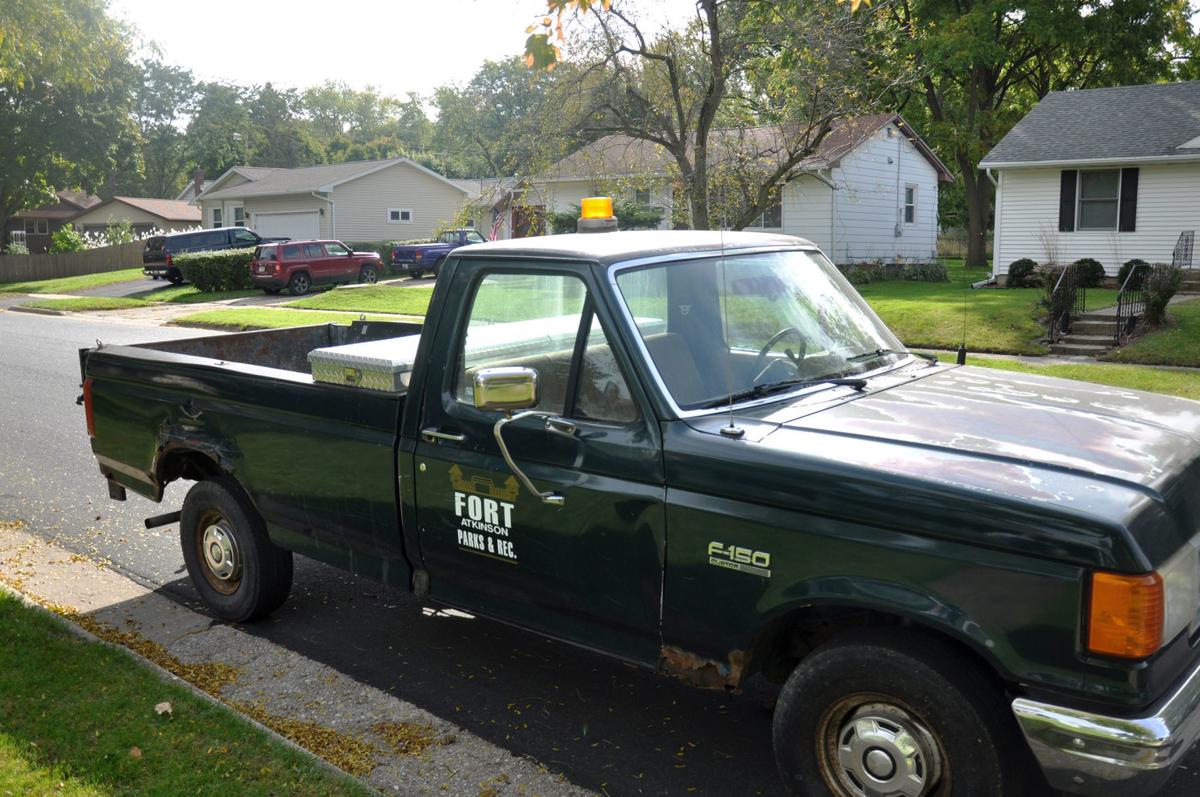 The F-150 with the A/C and AM/FM radio that’s been in the Fort Atkinson Parks Department since 1991. 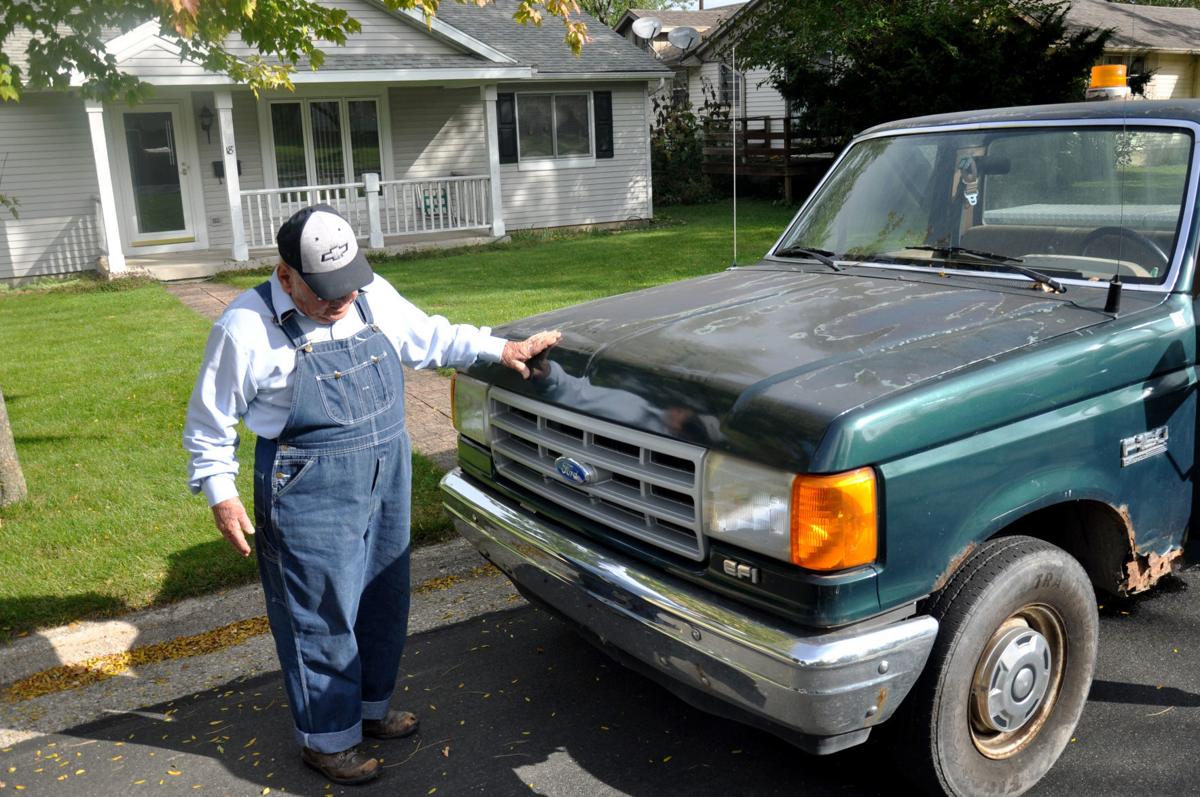 Vern Magsamen kicks the tires on the truck he drove every day for eight years. 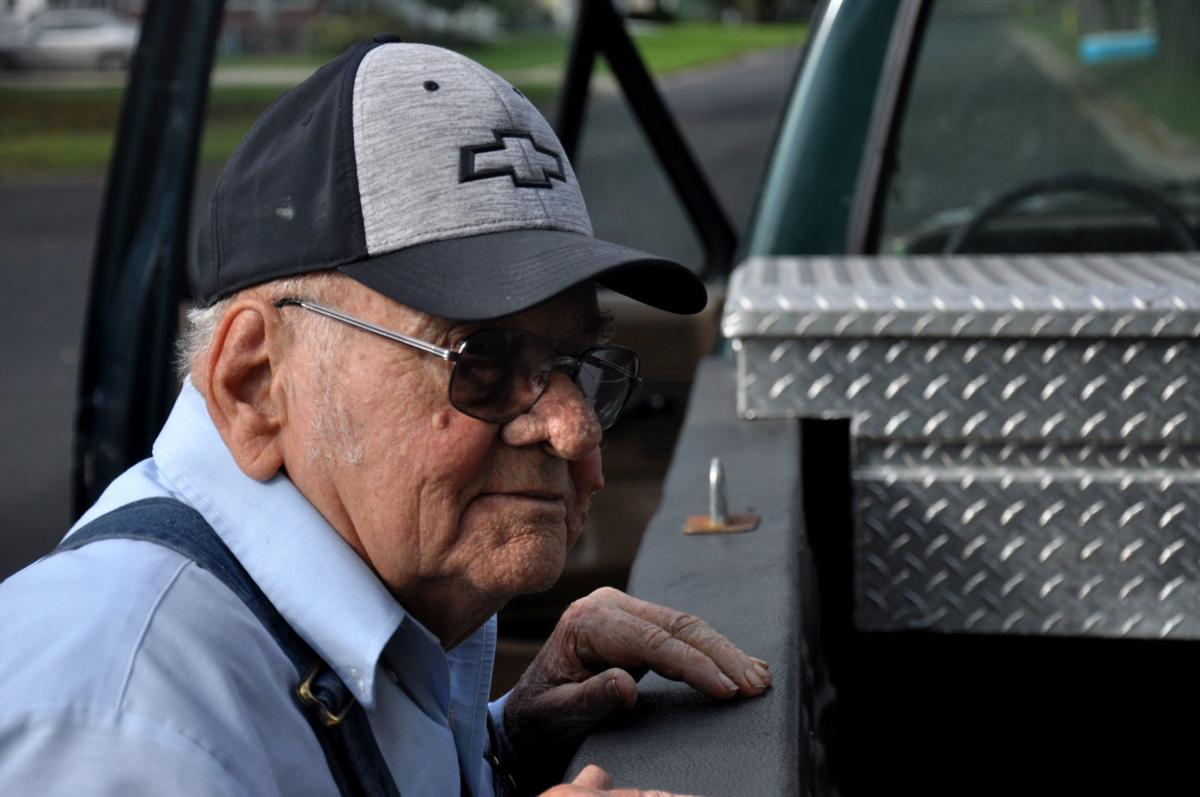 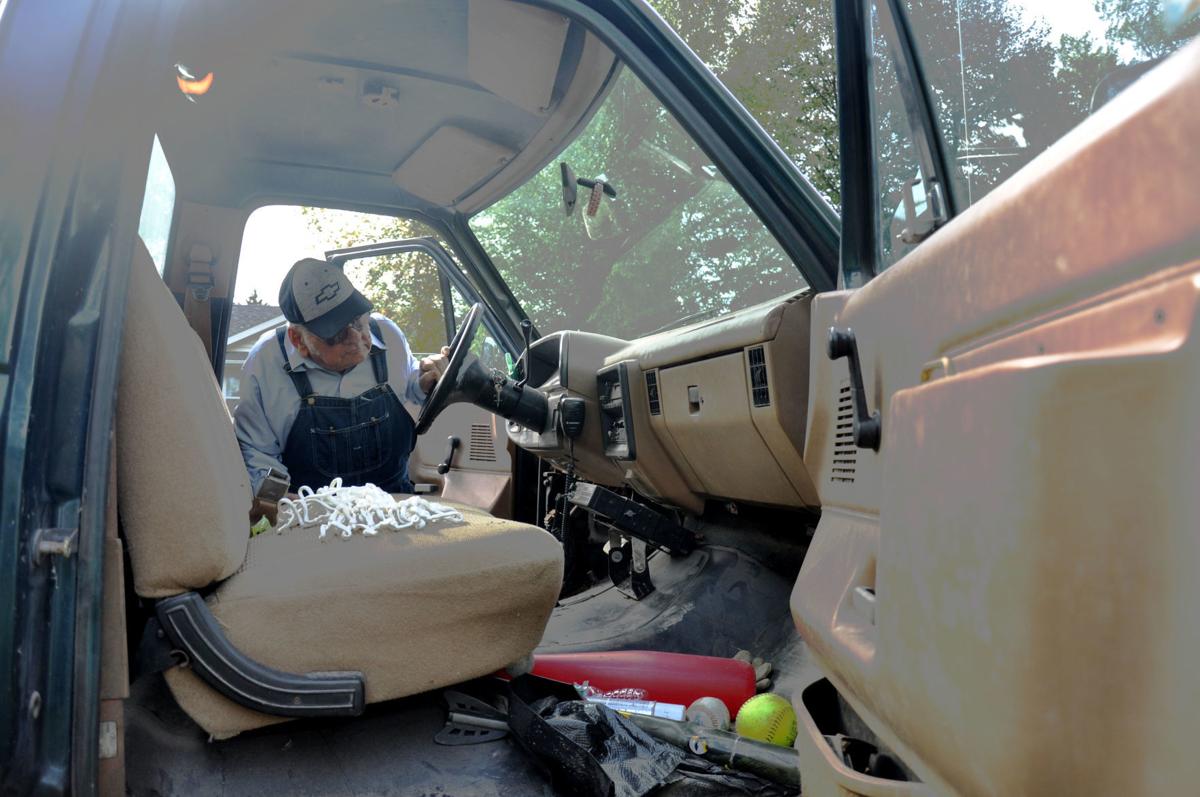 The truck has seen better days with the wear and tear of 28 years of use showing in the interior. 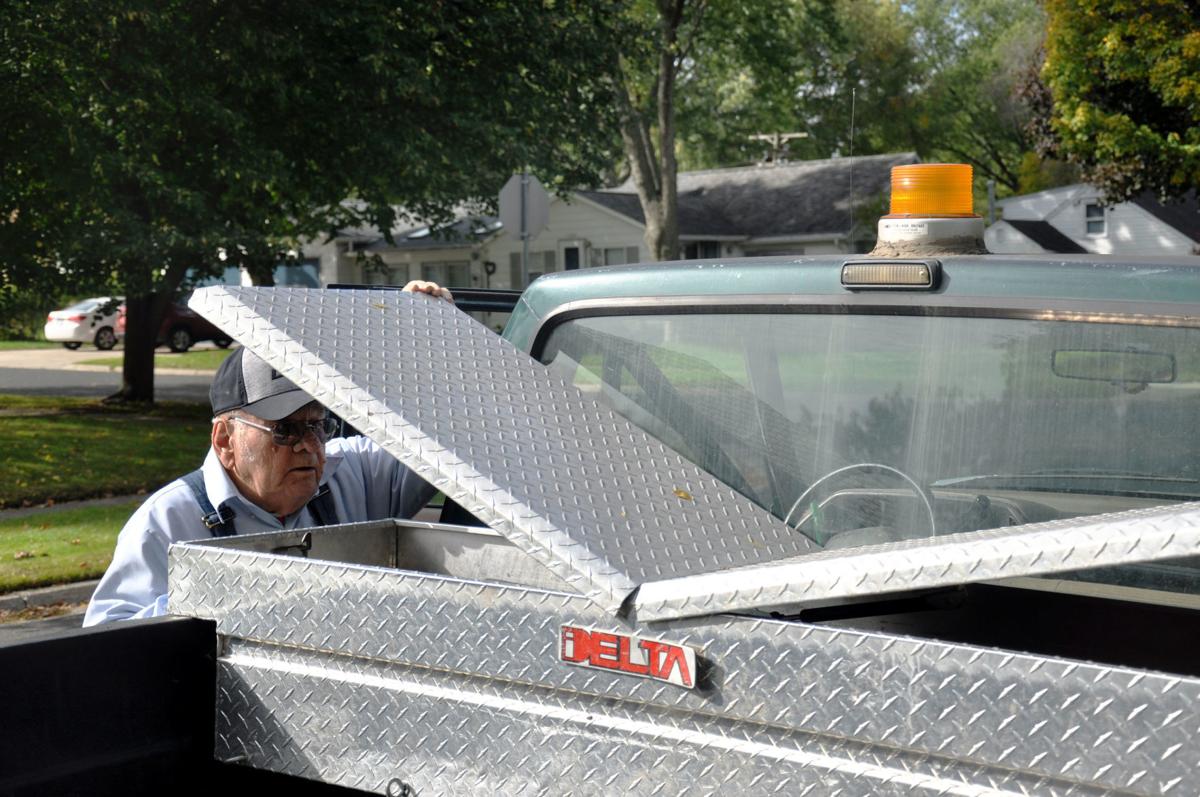 When the F-150 was Vern’s, the truck didn’t have a tool box in the bed. Instead, he packed his overall pockets with the tools he needed for the day.

For 28 years, that forest green 1991 Ford F-150 hasn’t been called anything but “Vern’s Truck.” It’s traveled up and down the streets of Fort Atkinson, checking on the city’s parks and making sure the pool was running smoothly.

Vern is Vern Magsamen, a 42-year veteran of the Fort Atkinson Parks and Recreation Department who retired — for the second time — in 2018.

But while Vern is retired now, the truck isn’t.

That forest green 1991 Ford F-150 remains in service, still traveling up and down the streets of Fort Atkinson, checking on the city’s parks and making sure the pool is running smoothly.

And if he could, Vern still would be in service, too, traveling up and down the streets of Fort Atkinson, checking on the city’s parks and making sure the pool was running smoothly.

The truck bears the city’s old logo on the doors. The door handles are long gone; instead, someone’s screwed metal cabinet handles into the siding.

Scott Lastusky, Fort Atkinson’s Parks and Recreation Department director, couldn’t remember if it was this truck or another that had a stop sign on the floor to cover a hole; however, he did know Vern’s truck’s floor recently was replaced.

At 28, the truck is one of the oldest vehicles in the municipal garage, kept alive with a hope and a prayer and the ingenuity of the city’s mechanics.

“They have really good mechanics who know how to keep up with it,” Lastusky said.

The truck looks pretty good, according to Lastusky, as long as you avoid looking at the sun-aged hood.

If you don't look at my hood, I look pretty good too."

“If you don’t look at my hood, I look pretty good too,” Vern said.

But why this truck? What’s the big deal about an aging city-owned vehicle? Sure, plenty of vehicles have stories to tell.

A 16-year-old’s first car might tell the story of a first kiss, the drive to prom, to football games, to parties and trips down dark, dusty country roads taken a bit too fast as it rounds the curves of Jefferson County.

A parent’s car might tell the story of the first day of kindergarten, rides to school and to soccer practice and the drive to college, packed full of clothes with a futon strapped to the roof.

Your car might tell your story, of cross-country roadtrips and songs sung a bit too loud and a tad off-key.

Magsamen was born in 1934 in Nebraska. His dad moved the family to Fort Atkinson after three years of crop failures.

But those other jobs didn’t stick like the one he ended up holding for four decades.

“I moved off the farm and over onto Janesville Avenue,” Magsamen said. “One day, I watched three guys planting a tree outside and said, ‘I’ve got to get a job like that.’”

From mowing lawns, Magsamen worked his way up and eventually became parks foreman, in charge of the upkeep and maintenance of all the parks in town.

Six months into his job as parks director, Lastusky attended his first city capital outlay meeting. In that meeting, Lastusky requested money to buy a new truck for the department.

He ended up buying a forest green 1991 Ford F-150 with air conditioning and AM/FM radio.

“The 1991 budget, six months into my new job,” Lastusky recalled. “I get to tell Vern he’s getting a new truck. I think I wanted him to like me.”

The truck arrived and it got to work.

“The other departments were jealous,” Magsamen said.

“In the mornings, I checked the parks,” Magsamen said. “Whatever it took, that’s where I went.”

For the next eight years, Magsamen got into that truck every day. He didn’t have a tool box in the bed of the pickup, so the pockets of his overalls were filled with the tools he needed for the day.

For the next eight years, Magsamen — then in his mid-fifties — and Lastusky — in his late twenties — worked together. Magsamen helping Lastusky every step of the way with his encyclopedic knowledge of the city’s park system.

“We don’t let them go easy, kind of like the trucks,” Lastusky said of employees. “His knowledge is so important.”

As parks foreman, Magsamen’s duties were widespread, but he became the in-house expert on the Fort Atkinson Aquatic Center — and his lungs show it after years of dealing with the chemicals.

He remembers having to fill the 400,000 gallon pool with a single garden hose, sitting at the pool 24/7 with his son-in-law making sure nothing went wrong.

When the pool opened in the early 90s, the first person to use the brand-new waterslide was supposed to be a local child.

But, Lastusky said, the city had a party the night before to celebrate the grand opening and someone had to test out the new slide.

Magsamen, who Lastusky had never seen out of his trusty overalls and baseball cap, asked for a pair of shorts.

So that’s how Magsamen, the 50-something-year-old parks foreman, the veteran, the overall wearer, became the first person to use the waterslide at the Fort Atkinson Aquatic Center.

In 1998, Magsamen retired from the department. But that doesn’t mean he actually retired. For the next 20 years, he worked part time for the department.

Partly for something to do, and partly to chew the fat with the guys in the garage.

And during that time, Vern still was in his truck and still was helping the department with his vast knowledge of every in, out, nook and cranny.

Eventually, though, Magsamen had to hang it up.

But even though Magsamen isn’t working anymore, his impact is still felt, Lastusky said.

The way Magsamen and his truck stuck around say something profound about the way a town like Fort Atkinson works, according to Lastusky.

Kids grow up, people move and come back, city council members are elected and leave, but still, Vern Magsamen and his forest green 1991 Ford F-150 will be around.

That’s because in a place like this, you spend your money wisely and make sure you get every last drop of hard work out of everything.

“We took care of it, and they lasted,” Lastusky said. “If this is what your budget is, you take care of it. You spend your dimes wisely. Vern was in charge of a group of guys who were good at fixing things, taking care of things.”

That lesson of taking care of things has been passed to Lastusky, who’s now about the age Magsamen was when he arrived in town. Whenever someone heads out in that truck, he tells them to be careful.

Things change and things stay the same, and one thing that will remain the same in Fort Atkinson — for as long as it’s given the care it deserves — is that forest green 1991 Ford F-150 with the air conditioning and AM/FM radio.

Longtime Fort Atkinson Parks and Recreation director Scott Lastusky is set to retire at the end of May, leaving the city to undertake a search…