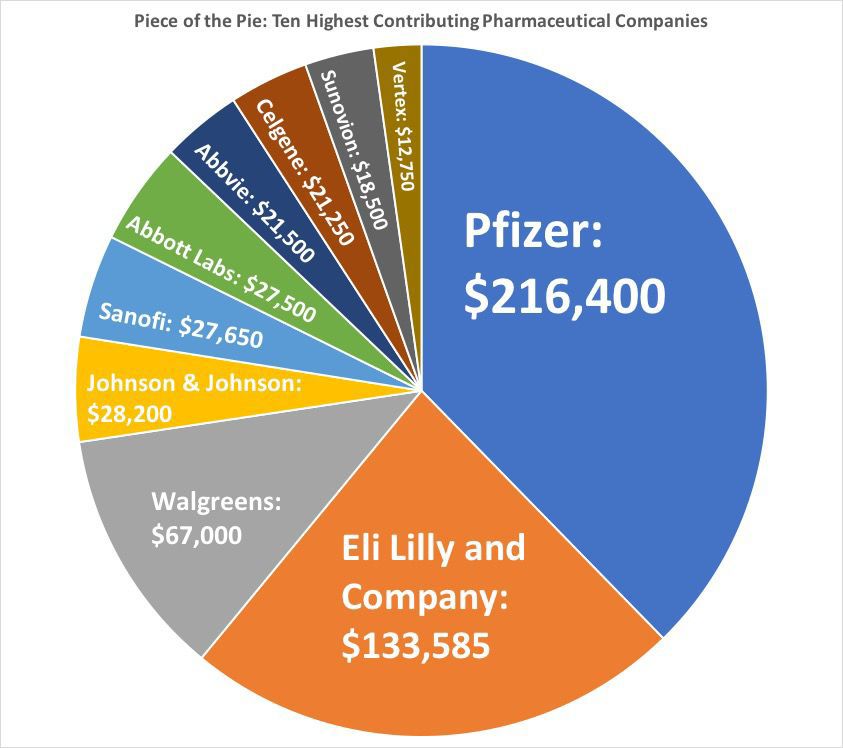 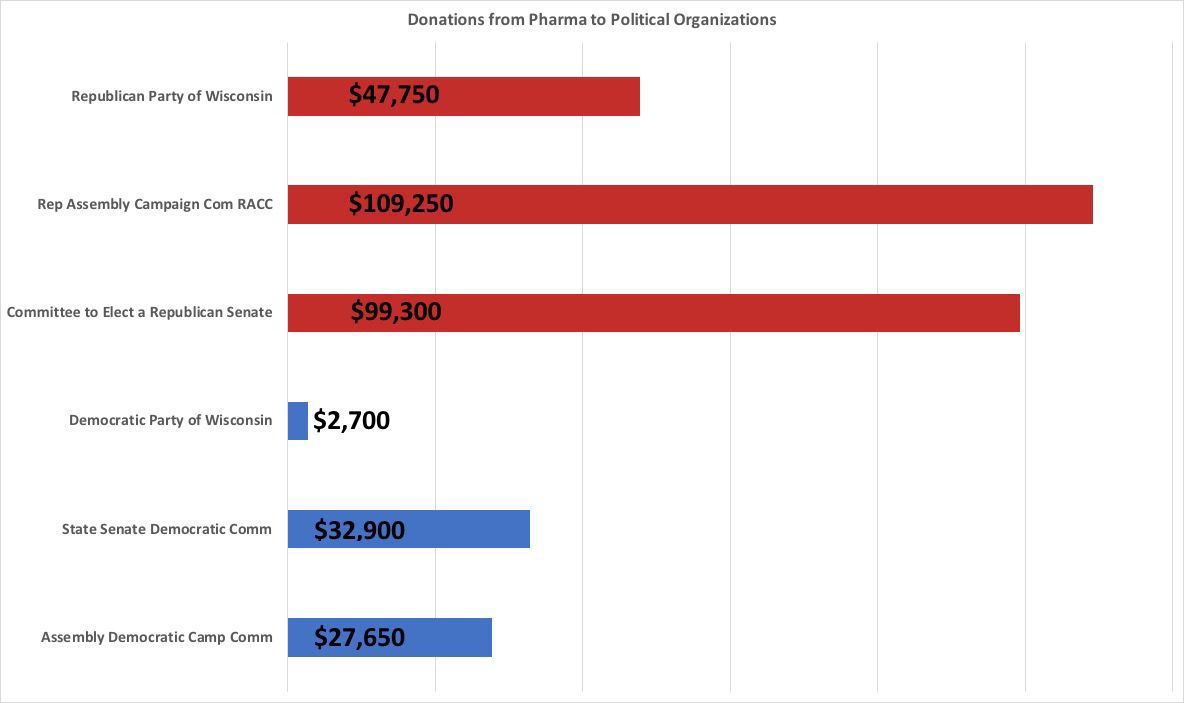 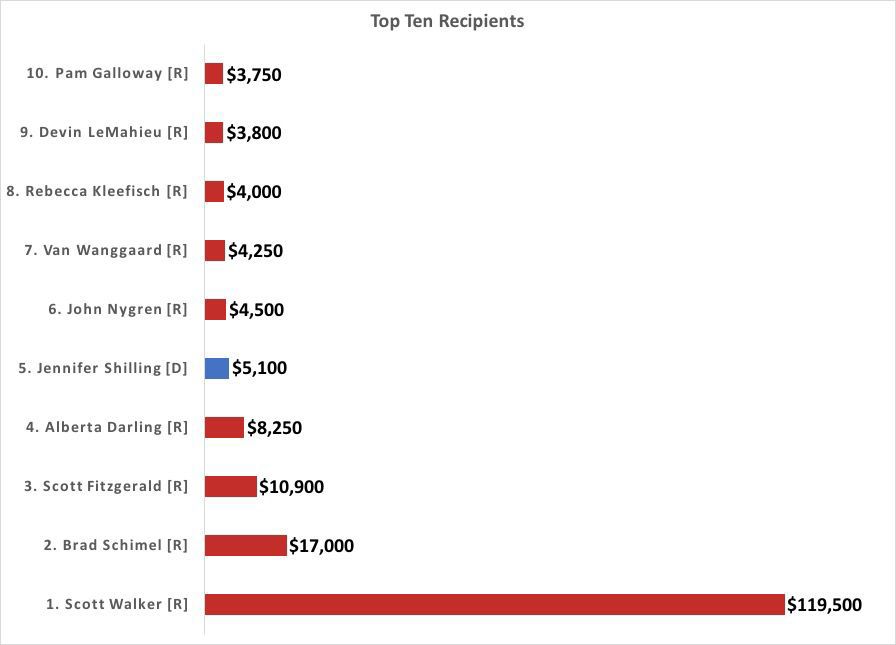 Opioids have killed, on average, 54 Wisconsinites a month since 2014, according to the Department of Human Services. And the Washington Post reports that from 2006-12, more than 1 billion prescription pain pills were prescribed in Wisconsin.

The impact of the opioid crisis in Wisconsin is staggering. So far this year, 839 people have died of an opioid overdose.

However, even as harmful and addictive opiates were changing the lives of regular Wisconsinites, state political campaigns and organizations accepted more than $600,000 in donations from pharmaceutical companies, according to an analysis of Wisconsin campaign finance records.

The analysis was done by cross-referencing publicly available campaign finance records with pharmaceutical companies named in the Washington Post data or listed by the Center for Responsive Politics as a large donor to political campaigns.

It revealed that political contributions from pharmaceutical companies skewed Republican as the Wisconsin Legislature voted on issues reaching far and wide into the pharmaceutical industry.

Right now, the state Assembly Committee on Health is considering a bill that would impact how pharmacies are licensed and audited.

The campaign donations cover the last decade, beginning in 2008, and went to politicians in every branch and every level of Wisconsin government.

Party organizations accepted half of the money from Big Pharma — on both sides of the political aisle.

The organization that received the most was the Republican Assembly Campaign Committee, garnering $109,250 in political contributions.

The candidates taking money from pharmaceutical companies also were overwhelmingly members of the Republican Party.

Of the 10 political candidates who accepted the most cash from pharmaceutical companies in the last decade, only one was a Democrat: Senate Minority Leader Jennifer Shilling.

Shilling accepted $5,100 from Big Pharma, making her the fifth-highest recipient.

“Over the past few sessions, Senator Shilling has supported and voted in favor of numerous bills aimed at reducing opioid and heroin abuse,” Shilling Spokesperson Kate Constalie said in an email. “Additionally, Senator Shilling has held multiple round tables in her district with municipal leaders, law enforcement, service providers and victim advocates regarding the opioid crisis and continues to have ongoing discussions on the matter.”

The number-one beneficiary of donations from pharmaceutical companies was former Governor Scott Walker, who accepted $119,500.

The next-closest politician is behind by more than $100,000. Former Attorney General and current Waukesha County Circuit Court Judge Brad Schimel, who accepted $17,000, is second on the list.

A spokesperson for Fitzgerald defended the senator’s record on facing the opioid crisis.

“Senator Fitzgerald and Wisconsin Republicans have attacked the opioid epidemic in Wisconsin directly,” Communications Director Alec Zimmerman said in an email. “Through legislation like the HOPE agenda and increased investments in Treatment and Diversion programs carried out by county courts, he’s taking a hands-on approach to combating opioid abuse in Wisconsin.”

Pfizer is one of the largest pharmaceutical companies in the world, making dozens of well-known drugs — including the highly addictive synthetic opioid Fentanyl. Pfizer has spent $216,400 on Wisconsin politicians since 2008.

“Pfizer supports candidates and elected officials from both political parties who work on policies that are important to patients and our industry,” Pfizer said in a statement. “Our political contributions are led by two guiding principles — preserve and further the incentives for innovation, and protect and expand access to medicines and vaccines for the patients we serve.”

“Walgreens pharmacists are highly trained professionals committed to dispensing legitimate prescriptions that meet the needs of our patients,” Walgreens spokesman Phil Caruso said in an email. “Walgreens has not distributed prescription controlled substances since 2014 and before that time only distributed to our chain of pharmacies. Walgreens has been an industry leader in combatting this crisis in the communities where our pharmacists live and work.”

While 24 pharmaceutical companies donated to Wisconsin campaigns in the last 10 years, the 10 highest contributors constituted 91 percent of the donations. Those 10 companies spent a combined $574,335 on Wisconsin politics.

Meanwhile, pharmaceutical companies continue to pour money into the state. On June 19, a $2,500 donation came from Alkermes, the producer of Vivitrol, a drug used to prevent relapse into opioid use.

The Republican Party of Wisconsin, Judge Brad Schimel and Eli Lilly did not respond to requests for comment.

JEFFERSON — The holiday season can be difficult for many people. Whether they’re coping with the first Christmas since the loss of a loved one…

Jefferson County drug arrests up since 2014

JEFFERSON — As residents struggle with addiction and law enforcement agencies try to focus on education and treatment of addicts, drug arrests…