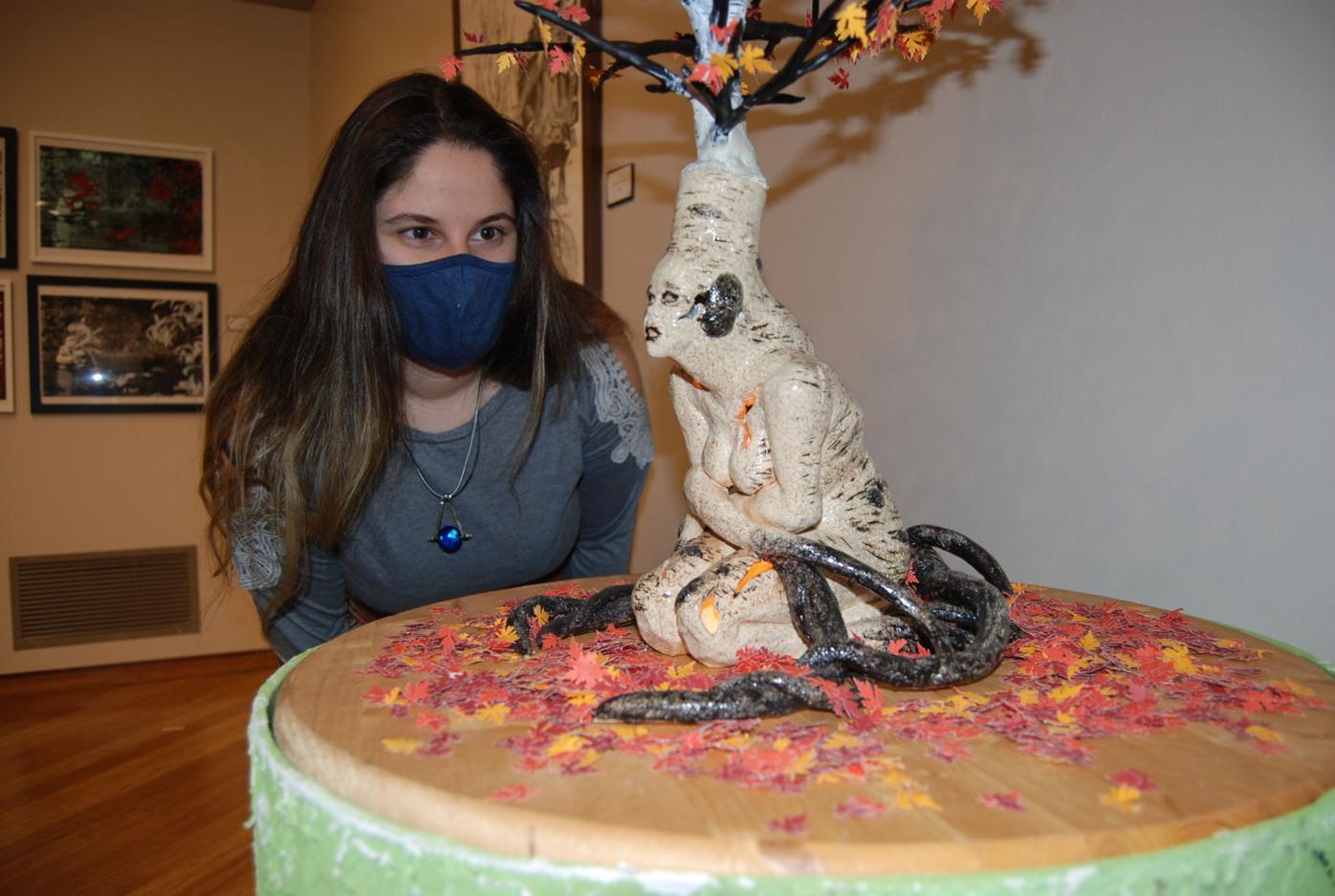 Local artist Taylor McDarison visits with one of three "tree ladies" on display this month as part of the "Old Myths in a Modern Conversation" exhibit at the Roberta Avonn Fiskum Art Gallery located in the James R. Connor University Center at UW-Whitewater. The piece, called "Light Pollution," is one of several depicting man's impact on the natural world. 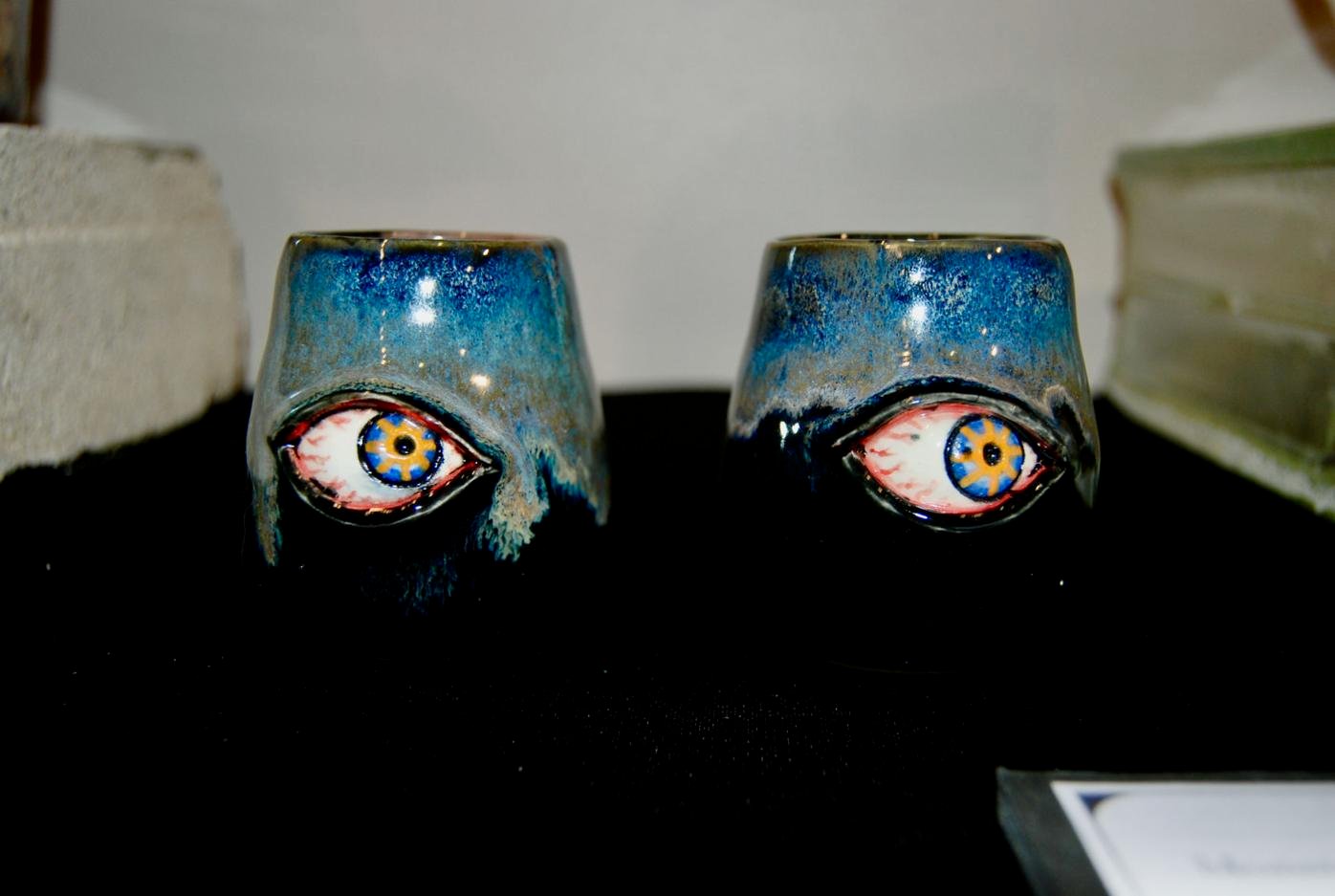 Ceramic shot glasses created by artist Taylor McDarison bring an element of whimsey. The glasses are among pieces on display this month at the Roberta's Art Gallery in the James R. Connor University Center at UW-Whitewater. 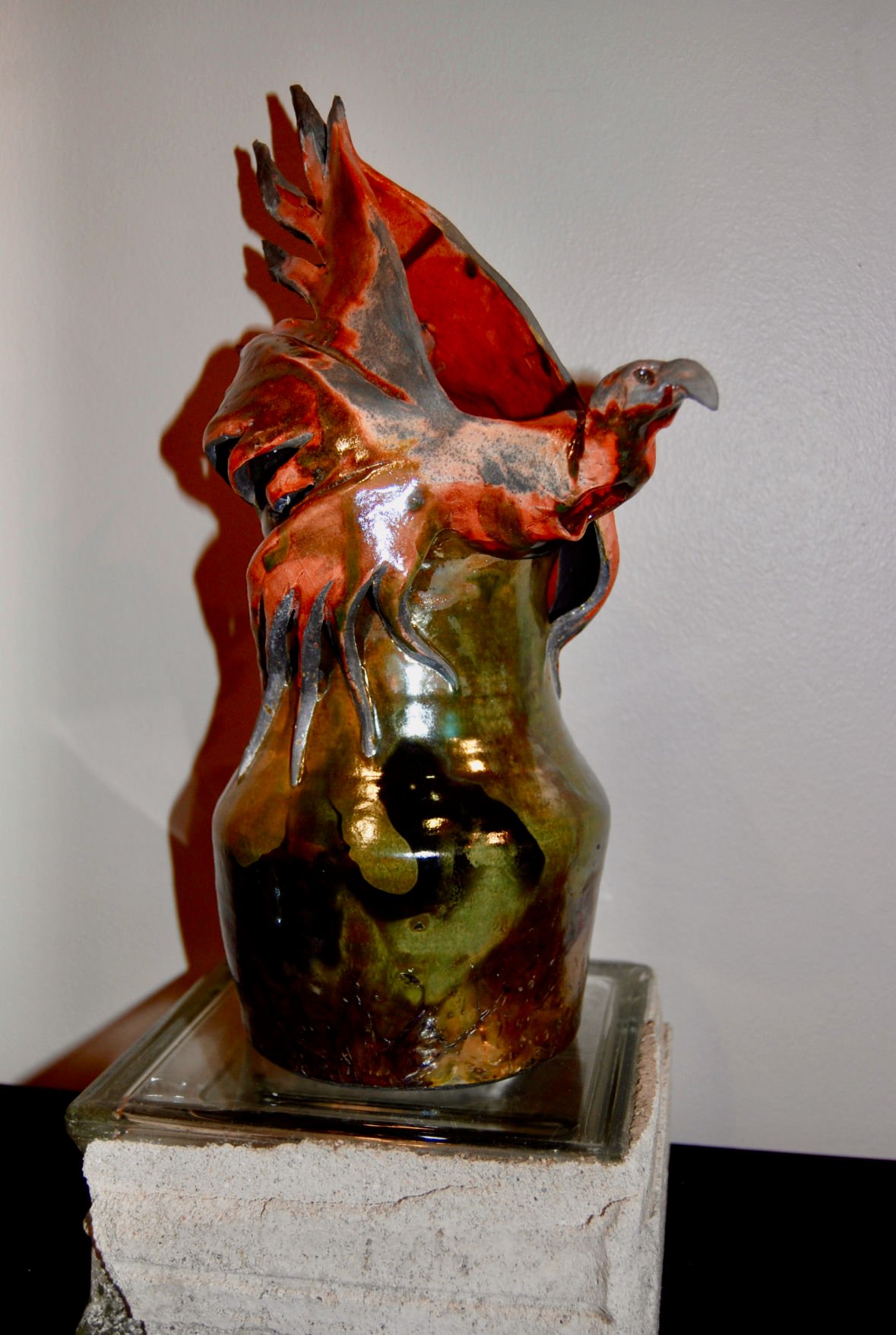 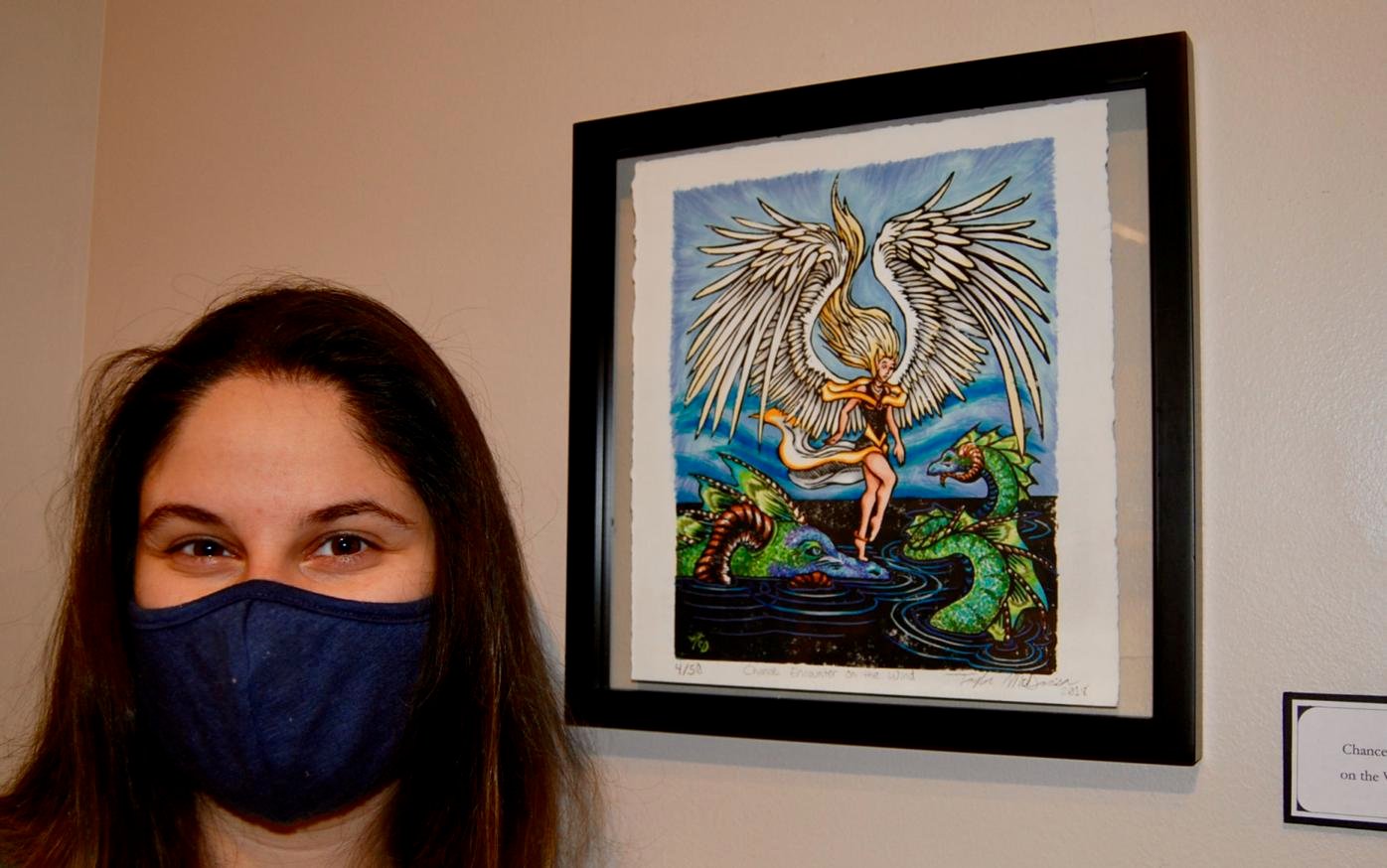 A lino-block relief print entitled: “Chance Encounter on the Wind,” is among flatwork pieces on display at the Roberta’s Art Gallery at UW-Whitewater. The piece is included in an exhibited entitled: “Old Myths in a Modern Conversation,” featuring the work of local artist Taylor McDarison. 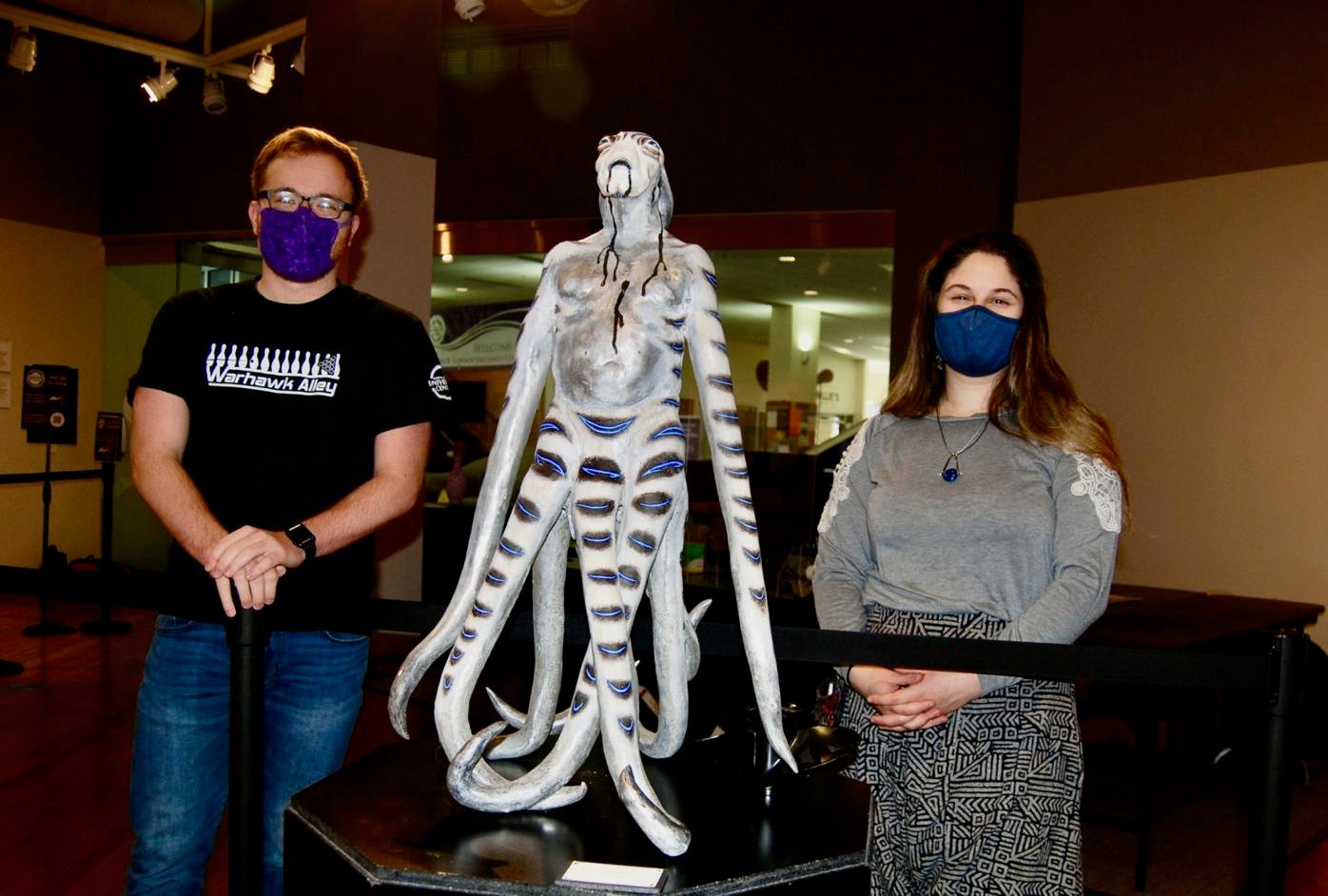 Local artist Taylor McDarison visits with one of three "tree ladies" on display this month as part of the "Old Myths in a Modern Conversation" exhibit at the Roberta Avonn Fiskum Art Gallery located in the James R. Connor University Center at UW-Whitewater. The piece, called "Light Pollution," is one of several depicting man's impact on the natural world.

Ceramic shot glasses created by artist Taylor McDarison bring an element of whimsey. The glasses are among pieces on display this month at the Roberta's Art Gallery in the James R. Connor University Center at UW-Whitewater.

A lino-block relief print entitled: “Chance Encounter on the Wind,” is among flatwork pieces on display at the Roberta’s Art Gallery at UW-Whitewater. The piece is included in an exhibited entitled: “Old Myths in a Modern Conversation,” featuring the work of local artist Taylor McDarison.

WHITEWATER -- “Old Myths in a Modern Conversation” is the featured exhibit at the Roberta Avonn Fiskum Art Gallery, located in the James R. Connor University Center at UW-Whitewater, 190 Hamilton Green Way. The exhibit is free, open to the public, and can be viewed in-person and virtually through Jan. 8.

The exhibit features the work of local artist and UW-Whitewater alumna Taylor McDarison. McDarison is a 2016 graduate holding a bachelor’s degree in fine art, with emphasis in ceramics and sculpture.

McDarison said this is her first solo exhibit, which includes a body of work that took about six years to make. Several mediums are represented, including print making, mixed media, ceramics, metal casting, pottery and drawings.

McDarison was born in Lake Geneva, and lives there today, but said she most identifies with her upbringing on a small farm in rural Delavan.

The melding of art, animals and myth

“We lived on a 3-acre hobby farm. We raised everything from horses to cats, to peacocks and even a Sulcata tortoise, so it was just a slew of everything. It was where I formed my love of nature and the organic,” she said.

That love, ultimately transferred to her art, she added.

“We are sort of creations of our experiences, and the farm is a very large part of whom I came to be, and you see nature and beasts in my art because I was raising all these animals. My love of fantasy grew not just out of inspiration from the farm, but also I have a very supportive family that didn’t stifle any creative thoughts. Instead, I was encouraged to imagine, and grow from there.”

Intrigue with the natural world amalgamated with her interest in lores, legends and myths, McDarison said, noting: “I’m drawn to those things as a heavy inspiration for all of my work. It comes from a desire to escape to something eccentric and happy.”

Such desires are often expressed culturally through lore, and legends, in the form of allegory and storytelling, she said.

In middle school and high school, she said, she was drawn to mythologies from Greek, Japanese and Chinese cultures, and used those inspirations as a “launch pad” to create compositions and ideas, and ultimately sought to use mythical expression to talk about modern issues.

In those years, she said, many of her young contemporaries were interested in myths and legends. “I just never grew out of it. The fascination grew and it became context, and I made art from this place of whimsey,” she said.

McDarison said she felt drawn to express her thoughts through art as a preschooler.

“When I picked up a crayon as a 3-year-old, I felt like I had direction,” she said, adding that over time, “the crayon just turned into many forms. It became ceramics, metal casting, print making and whatever else I can get my hands on,” she said.

“This show: Old Myths in a Modern Conversation, is about taking old myths and legends and spinning them into art pieces that speak about modern topics, such as the environment and emotional struggles, and this idea that good and evil, in our society and in our world, is gray,” McDarison said.

McDarison said having her work selected for a solo show in the “Roberta’s” gallery, as it is known on campus, was “a dream come true.”

“I have taken part in a lot of group exhibitions, but never had my own. It felt like coming home.”

Connections made through contacts and volunteer experiences on campus and through the Whitewater Arts Alliance have been invaluable in helping her explore opportunities for her art, she said.

“I think opportunities come through volunteering. I did a lot of volunteer work and I am still involved with the UW-Whitewater metal studio,” she said.

McDarison serves as a volunteer agent, helping students and community members with metal work projects and assisting both on and off campus on metal pour crews. Through such experiences she has become connected with a community of metal artists, she said, noting: “If you attend iron conferences, you know everybody in the nation. It’s a small community. Collaboration comes through friendships formed with like-medium artists, I’ve met along the way.”

Those collaborations have allowed her to join several metal pour crews, some of which are reoccurring, and some of which form on a project-by-project bases, she said.

As a student, McDarison said, she began volunteering with the Whitewater Arts Alliance, and then left the program to focus on starting her own company, Arttaysia, LLC. In 2019, she said, she was hired as gallery manager by the alliance.

“I adored the position, but I have stepped down and passed the torch to focus again on Arttaysia, LLC. But I have found the nonprofit art work to be invaluable as I continue to reach for my own goals,” she said.

McDarison also serves as a ceramics instructor at The Potter Shop, Waukesha.

“I never thought I’d enjoy teaching. In the art world, it’s about making the work, you’re like a hermit, a diva, it’s all about yourself, but when I became a teacher, I learned how much teaching teaches you about your own technical prowess, and your concepts. You have to troubleshoot and learn why things fail, and teach that to other people. It’s very self-reflective, and it enforces self-improvement because you want to be the best resource for your students that you can be. It’s very rewarding,” McDarison said.

For McDarison, goals include pursuing happiness and making a living through art. She travels throughout southern Wisconsin and northern Illinois, she said, selling her work at art and holiday fairs.

“After COVID came, there was a dry spell from June to August, but people wanted their art fairs back, so people became innovative, creating in-person experiences and I’ve been impressed,” she said, adding that organizers have become very good at adhering to protocols that keep everyone safe.

For those viewing her work at the Roberta’s gallery online or in-person, McDarison said she hopes to challenge them to see beyond a first impression.

“My pieces come off as beautiful, but I hope people will see past the beauty, and see the conceptual undertones. I want them to come away with thoughts about the environment and their own sense of happiness.”

Offering her advice to other artists, she said: “You have to have blind optimism. You will have more disappointments than successes, so you have to have zero room for any kind of doubt in yourself.”

To view McDarison’s work on exhibit at the Roberta’s gallery online, visit: https://www.uww.edu/uc/things-to-do/robertas-art-gallery/old-myths-in-a-modern-conversation.

The mission of the Roberta’s gallery, as stated on its webpage, is to “collaborate with campus departments, students, organizations and community groups in coordinating and sponsoring exhibits,” and to “plan and implement free, hands-on workshops for students, campus and the community.” The gallery looks to “inspire individuals to explore their creativity and share their stories.”

For more information about the gallery, visit the webpage: https://www.uww.edu/uc/things-to-do/robertas-art-gallery.