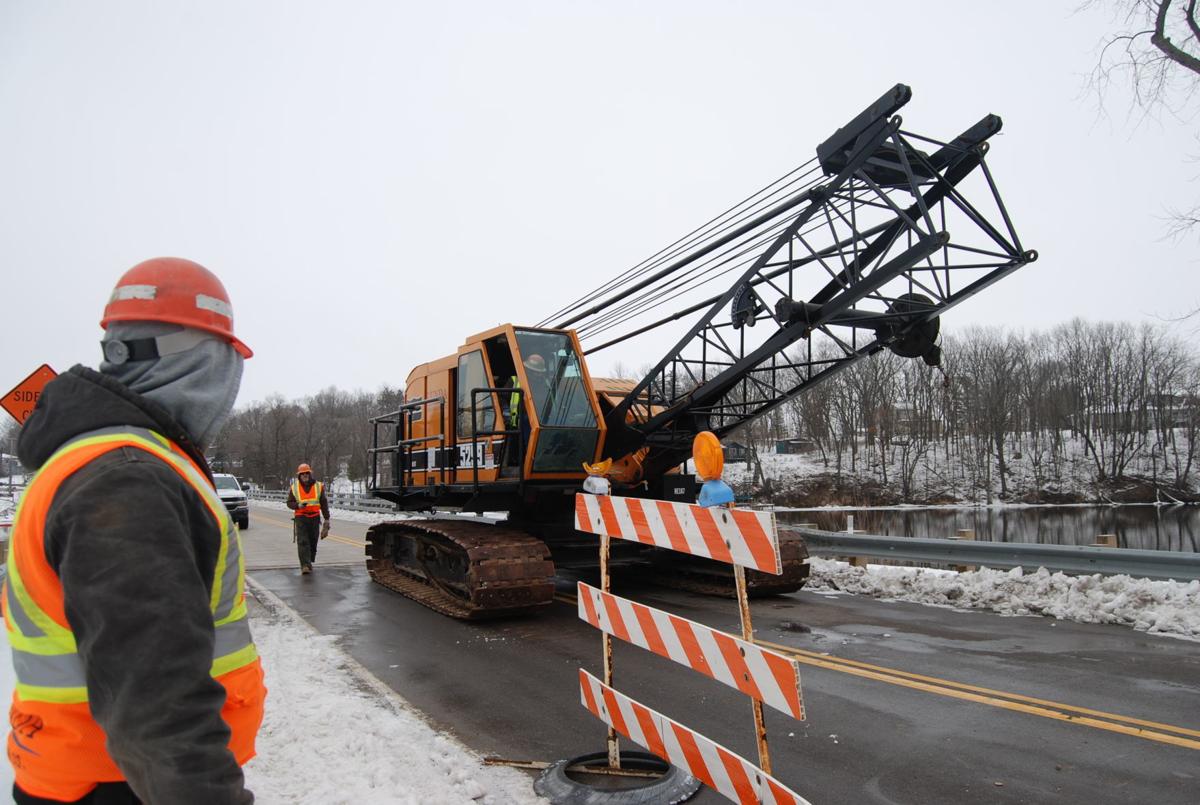 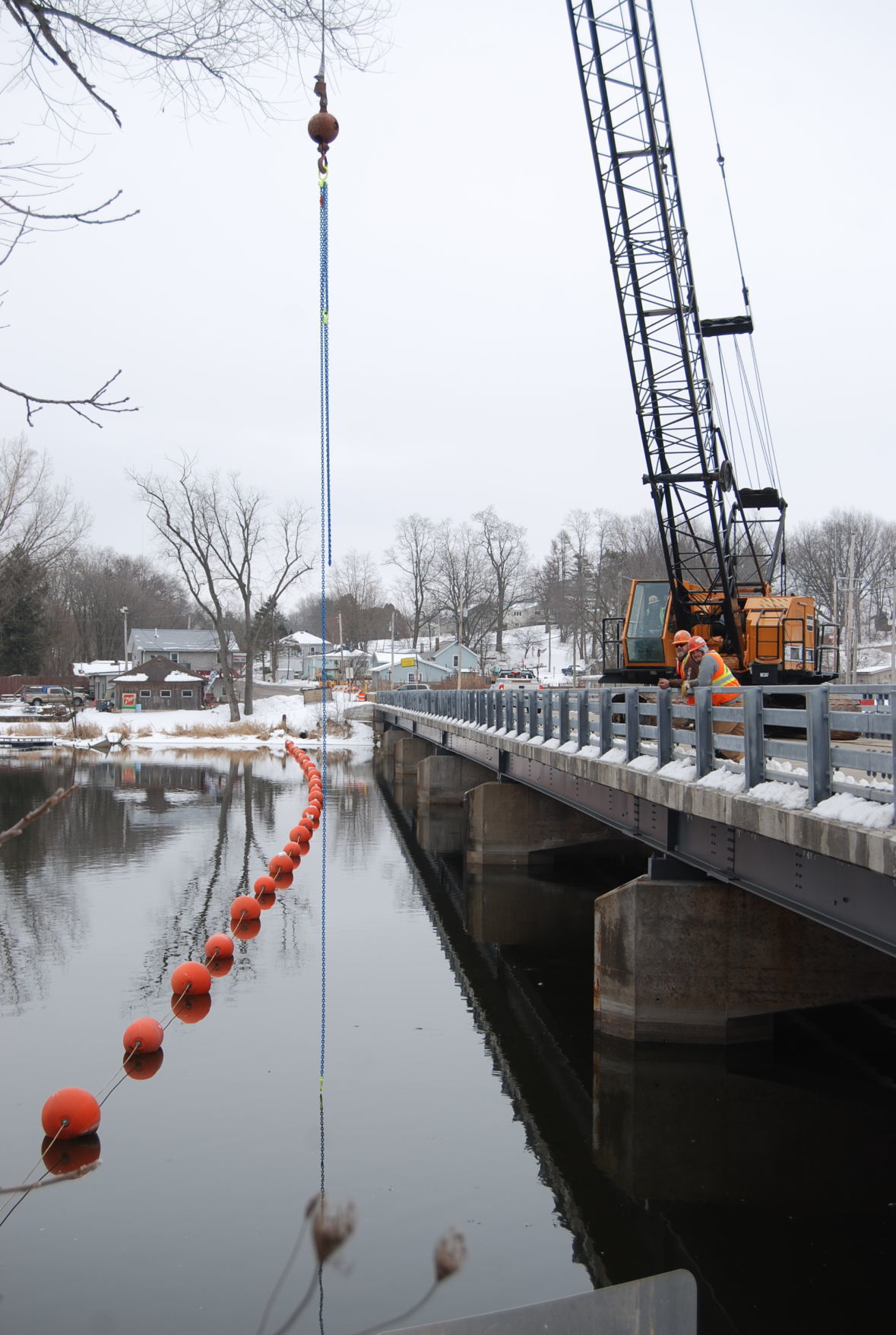 Positioned on the bridge, the crane served like a giant fishing pole with a hook on the end of a line. The hook was used to retrieve metal debris found Monday. 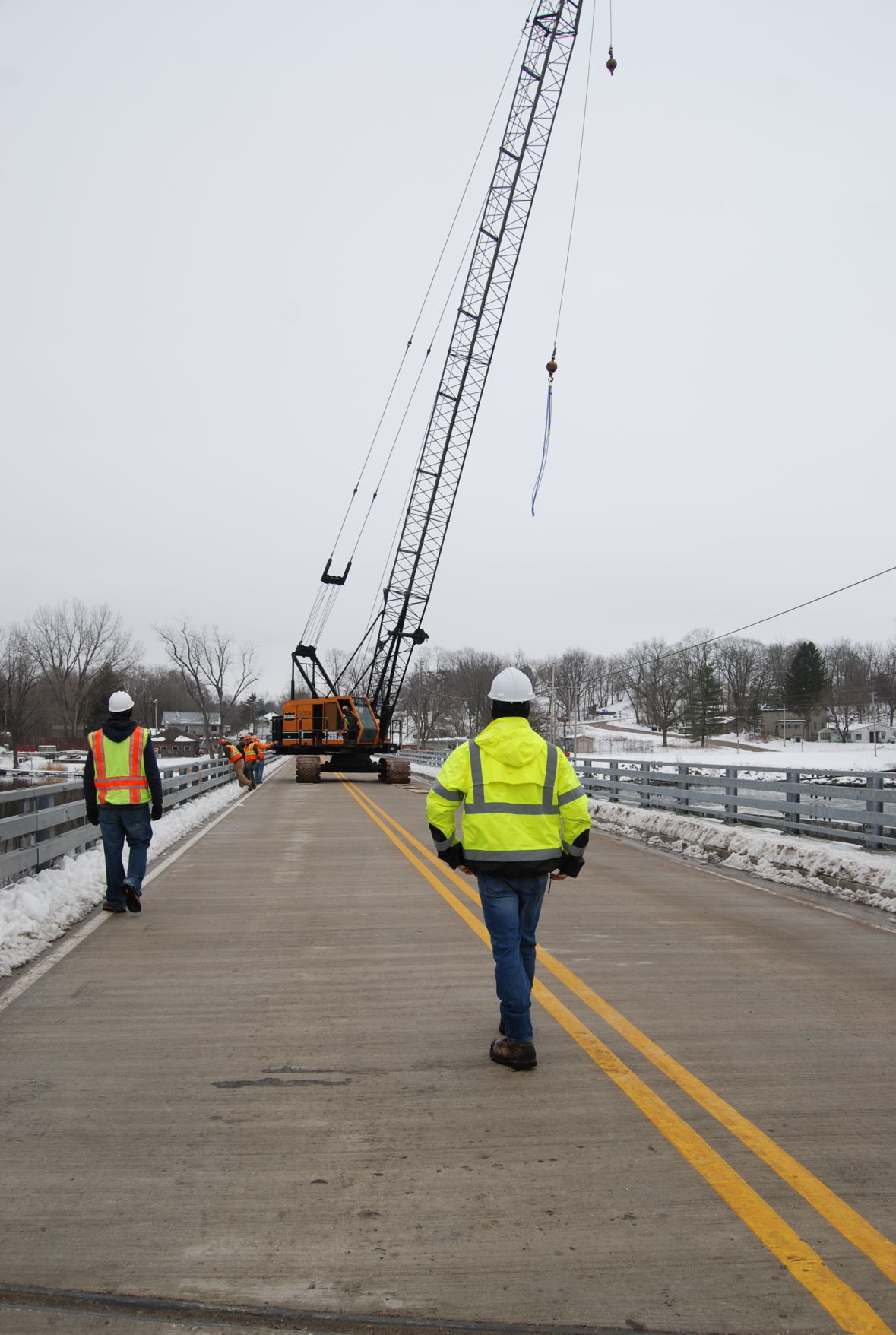 Workers guide the crane onto the bridge. 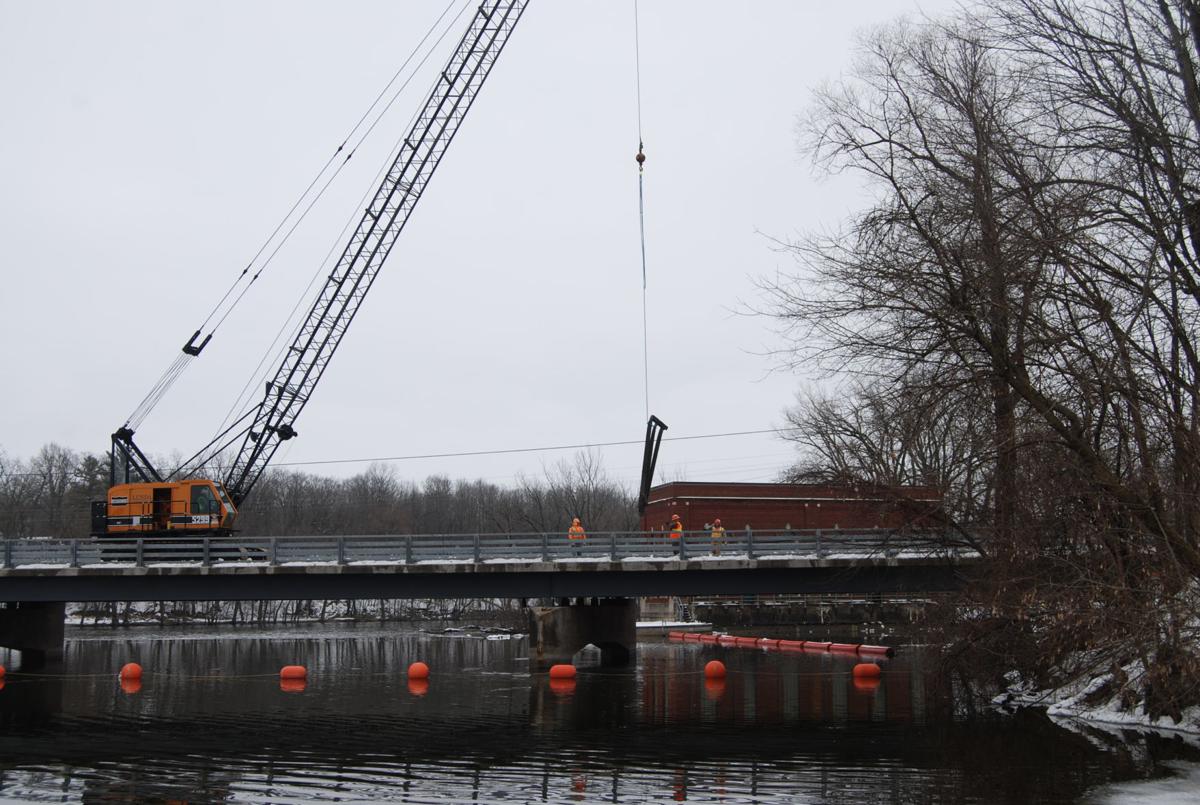 A large piece of metal debris is removed from the water.

Positioned on the bridge, the crane served like a giant fishing pole with a hook on the end of a line. The hook was used to retrieve metal debris found Monday.

Workers guide the crane onto the bridge.

A large piece of metal debris is removed from the water.

INDIANFORD — Debris removal from the Rock River beneath the County Highway M/F bridge in Indianford began Monday and is expected to be complete by week’s end at the earliest and possibly within two weeks, according to Lunda Construction senior project manger Laremy Sacia.

A need for debris removal was identified in October, both DOT and state Department of Natural Resources (DNR) officials said, after each agency conducted surveys using sonar equipment underneath the bridge. While the bridge reconstruction project used what DNR environmental analysis specialist Shelley Warwick described as “a minimal debris standard” — meaning that as a safety precaution, a minimal amount of construction debris was allowed to fall into the river — surveys exploring the riverbed showed that more debris than what was anticipated had become submerged.

DOT project manager Marc Schweiger sent a letter to Rock Road in November, directing the contractor to take corrective measures and requesting a plan of action and schedule for the work.

As the subcontractor performing the work, Sacia said, the task was passed on to Lunda.

“We have agreed to remove large concrete debris and it might take two weeks; we won’t know until we get in there to be sure,” Sacia said.

The process will include divers in the water and a crane with a “clam bucket” on the bridge deck. The volume of debris underwater remains unknown, Sacia said. Divers will make video recordings of the riverbed while work is under way. Videos will be shared with DOT and DNR officials periodically throughout the process.

“The plan is for a diver to go in and find the larger pieces. They won’t be able to remove it all,” said DOT project development supervisor Kurt Johnson.

DNR and DOT representatives are on site to visually observe progress, Johnson said.

While the DOT has authorized bridge closure for one week, Johnson said, depending on what is found under the bridge, cleanup could take longer. Weather also plays a role.

“The goal is that they make the best possible effort to remove extraneous materials from the river as much as possible and everyone is working together to accomplish that goal. DNR is looking for the subcontractor to make a good faith effort of removing as much debris as possible while balancing safety and feasibility as to what can be done out there,” Warwick said.

While work is being performed, wicket and slide gates at the Indianford Dam are closed, Rock-Koshkonong Lake District Board of Commissioners Chairman Alan Sweeney said.

High water and strong water flows contributed to safety concerns last year while the bridge was under reconstruction, Warwick said.

Currently, the water elevation is lower, but flows are strong, Sacia said. The company requested gate closure at the dam, especially near the river’s east bank where the bridge and dam are in close proximity, to reduce water velocity, Sacia said.

Schweiger said costs associated with the cleanup effort will fall to the subcontractor.

According to Johnson, costs were not discussed as part of the cleanup request.

“I don’t know what it will cost. Nobody brought that up. But they weren’t supposed to drop large pieces into the river,” Johnson said.

Johnson said larger pieces of concrete were located through sounding devices at the east end of the bridge and around the center spans. He cited ongoing safety concerns brought by high water and the dam’s proximity to the bridge as mitigating factors.

There also was a possibility that some debris could be from a 1950s bridge construction project, DAAR project engineer Casey Cullen said. DAAR provided onsite engineering consulting while the reconstruction project was under way last year.

Said Johnson: “The process concludes when we see a video that shows enough material has been removed. This is the Rock River. The cloudiness of the water makes visibility very poor, so we don’t know how much they are going to be able to see. In the winter, it clears up a little bit, but it is still difficult to see, so we are going to have to have some trust in the contractor, too.

Schweiger and Cullen were on site Monday.