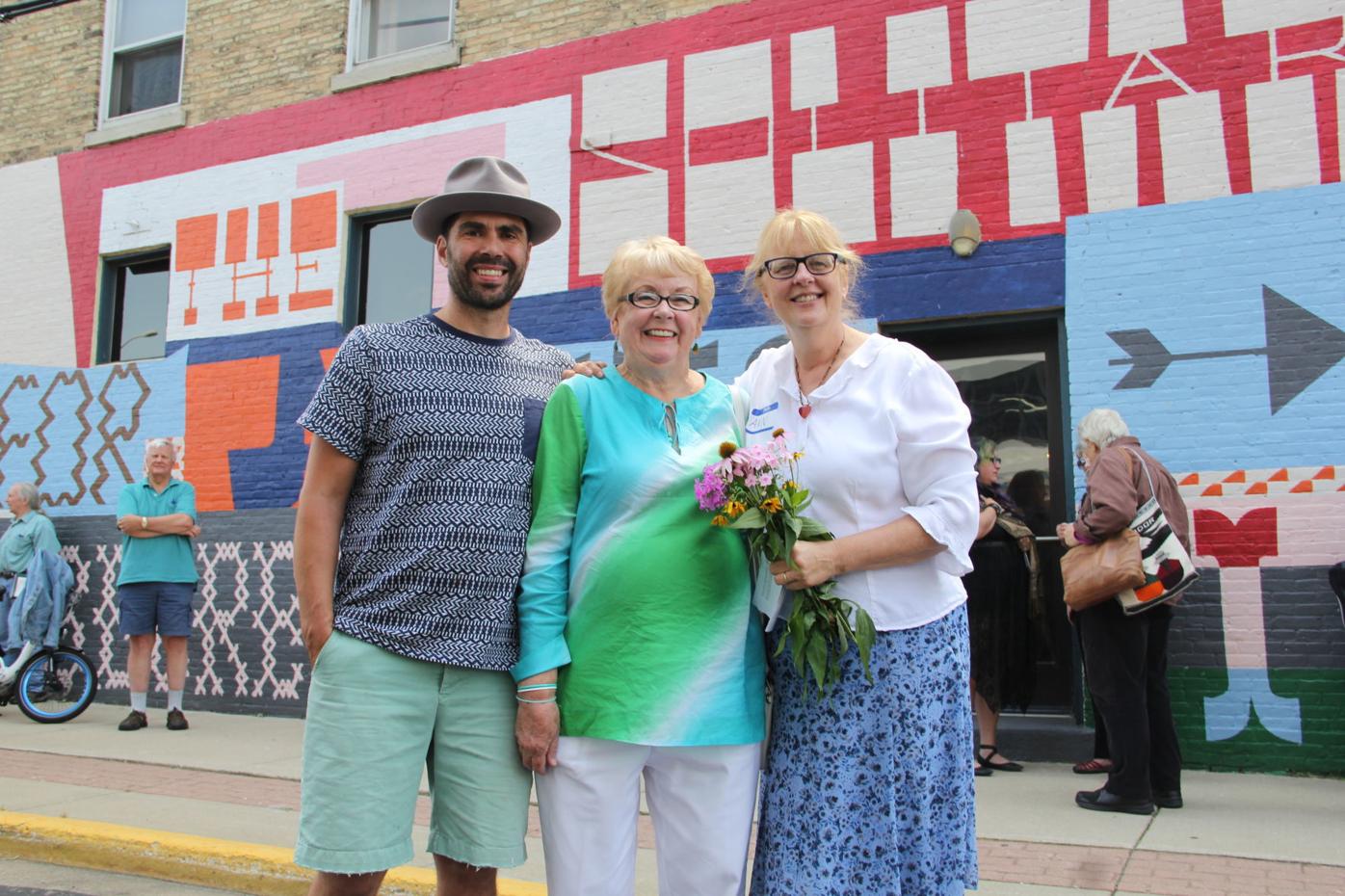 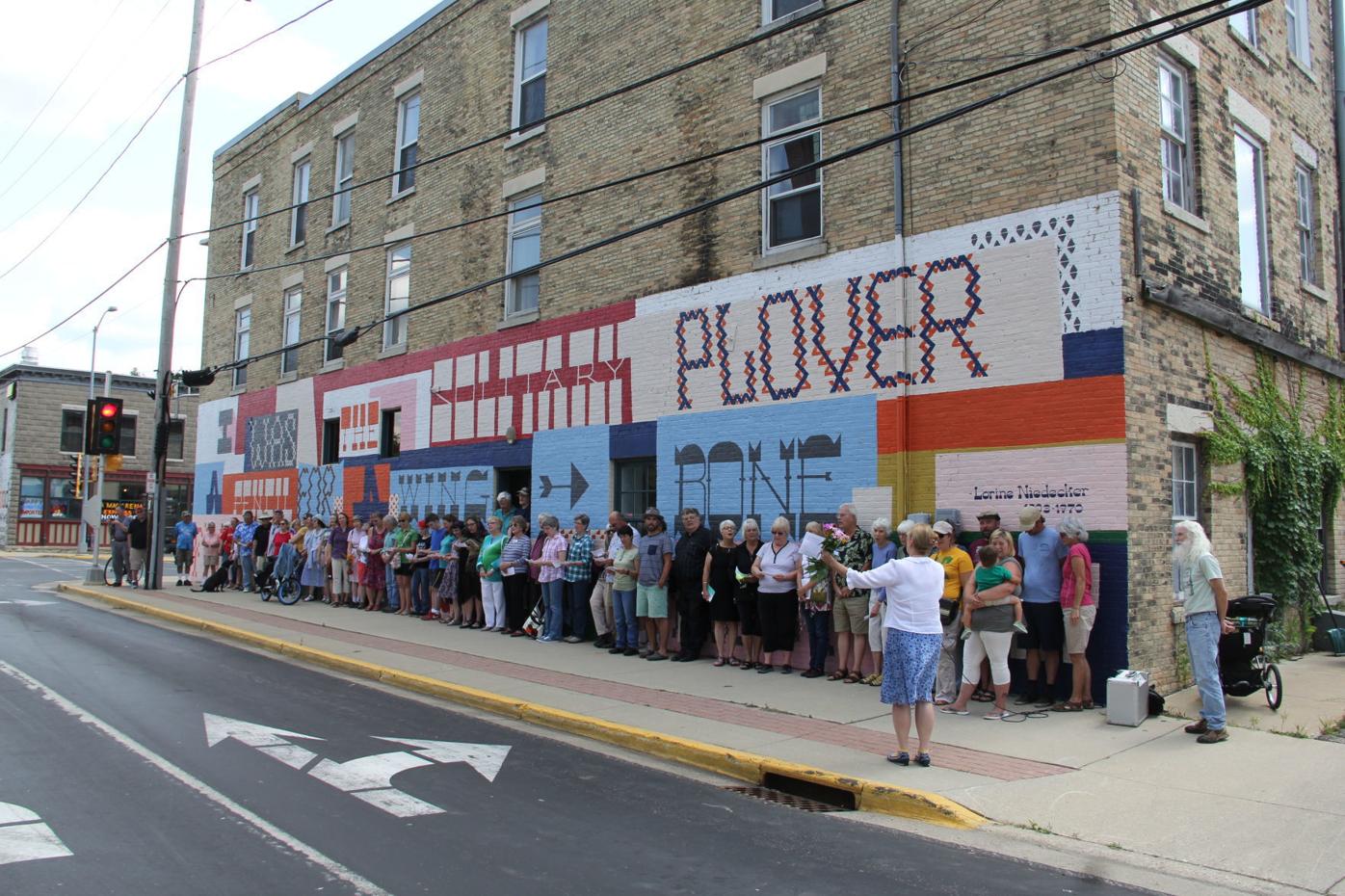 Julie Schoessow acknowledged Saturday that the pomp and circumstance that stopped traffic at the corner of North Main Street and West Sherman Avenue likely would have embarrassed her stepmother.

“She really would,” Schoessow said. “She liked the literary attention that she got from the literary world. But she was really her own person. A private person.”

However, her stepmother just happens to have been the late Lorine Niedecker, prolific “Poet of Place” who resided on Blackhawk Island west of Fort Atkinson. And the city she called home has been displaying her work with pride in very public ways.

Niedecker’s poetry inspired a first “poetry wall” in 2009, and the second was dedicated Saturday as part of the Lorine Niedecker Wisconsin Poetry Festival and the Fort Atkinson Area Chamber of Commerce’s Friends and Family weekend.

The wall was dedicated in an afternoon celebration, with members of the Friends of Lorine Niedecker, mural artist Jeremy Guzzo Pinc, Schoessow and many other Niedecker fans and community supporters in attendance. It was one of many poetry events Saturday, which included a poetry seminar at Dwight Foster Public Library, street poet Paul Wiegel creating spontaneous poems in addition to the dedication.

Designed and painted by Pinc, the wall features words from Niedecker’s “Paean of Place,” reading: “I was a solitary plover, a pencil for a wing-bone. From the secret notes, I must tilt.”

It speaks to Niedecker seeing herself as a little shorebird, and as she writes, her arm is her wing-bone.

The poem “Paean to Place” has been used in both poetry walls. The first, done in 2009, reads, “Fish Fowl Flood, Water Lily Mud, My life.” That wall, located right across Main Street street, refers to the poets Blackhawk Island roots.

“Paean” means a joyous song or tribute, a work that praises or honors its subject.

Friends of Lorine Niedecker President Ann Engelman led the ceremony Saturday, starting off by reading aloud the first two lines of the new poetry wall. She then recognized how Fort Atkinson is unique in having a poet such as Niedecker.

“Not many towns have the opportunity to have a poetry corner,” she said. “Heck, not many towns have in their history a poet like Lorine Niedecker. We have had such a good time inviting people to get to know her!”

In addition to thanking everyone involved with the project — including the various sponsors, event participants, building owner Sharon Holz, Dwight Foster Public Library’s Amy Lutzke and Scottie’s Eat More for its poetry take displayed on its sign on Main Street — Engelman introduced Pinc.

“We knew we wanted Jeremy to paint this wall,” she said. “He gets all the connections ... Lorine, our town, our river, the culture of our community. We waited for his schedule to clear.”

Engelman added, “Jeremy understands layers ... like Lorine, whose poems are often layered. This wall has layers ... you will come to know its many, many parts and nuances along with the poem stanza.”

Pinc has exhibited his work at various galleries in Madison, Milwaukee, Chicago and smaller towns in between.

Most recently, he curated “Future Primitive” at The Bubbler in Madison’s Central Library and will open a solo show at its main gallery in the fall.

His art is owned by collectors in the Midwest, as well as on the coasts in New York and California, and across the “pond in Paris.”

Pinc resides with his wife, Cynthia Holt, in Fort Atkinson, and is the artist behind both murals. He said Saturday that he had two different ideas for the second mural, and it took Engleman to convince him to take the more ambitious route.

“The other one … it almost looked like lined paper. It was going to be just that…and it was going to look like handwriting,” explained Pinc. “Maybe more stark and austere.

“Ann seemed to like this concept better,” Pinc added about the current design, with a mix of different font styles, colors and design elements.

“When you stand up close to it, I think there’s a lot of like rhythmic colors popping all over the place,” “It was really more inspired by (African-American) quilts I found online.

“I kind of took the idea from that.”

Representatives of those groups, plus many members of the Friends of Lorine Niedecker, were on hand. After the ceremonies and photos wrapped up, there was one final bit of history to cement. Everyone in attendance was videotaped saying the first two lines of the new poetry wall.

“I was a solitary plover, a pencil for a wing-bone.”

During her lifetime, Niedecker published her four poetry books at infrequent intervals (“New Goose” in 1946 and “My Friend Tree” in 1962), although she was a regular contributor to literary magazines. Since her death in 1970, the publication of four additional books, her “Collected Works” (2002), in particular, has contributed to her reputation as an original and significant voice in contemporary American poetry.

For more information about Niedecker, or to assist with this or future poetry projects, visit www.lorineniedecker.org. Pinc’s work can be found at www.jeremypincart.com.