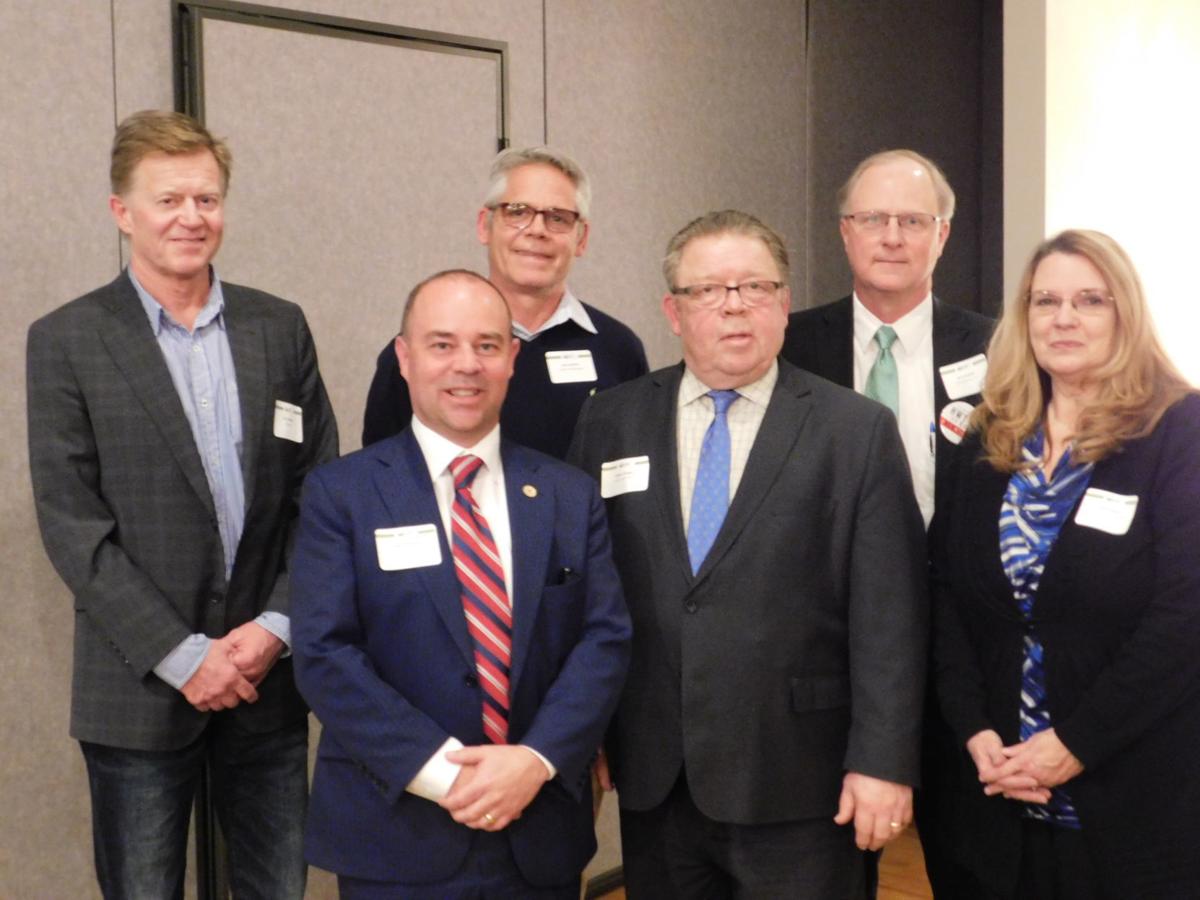 Wisconsin Transportation Secretary Designee Craig Thompson keynoted the Greater Whitewater Committee’s annual meeting Thursday night at the 841 Brewhouse in Whitewater. He is pictured above with members of the Greater Whitewater Committee Executive Board of Directors. From left to right are: Front Row — Thompson, GWC President Jeff Knight and Crystal Singer; Back Row — Russ Walton, John Laundrie and Larry Kachel. 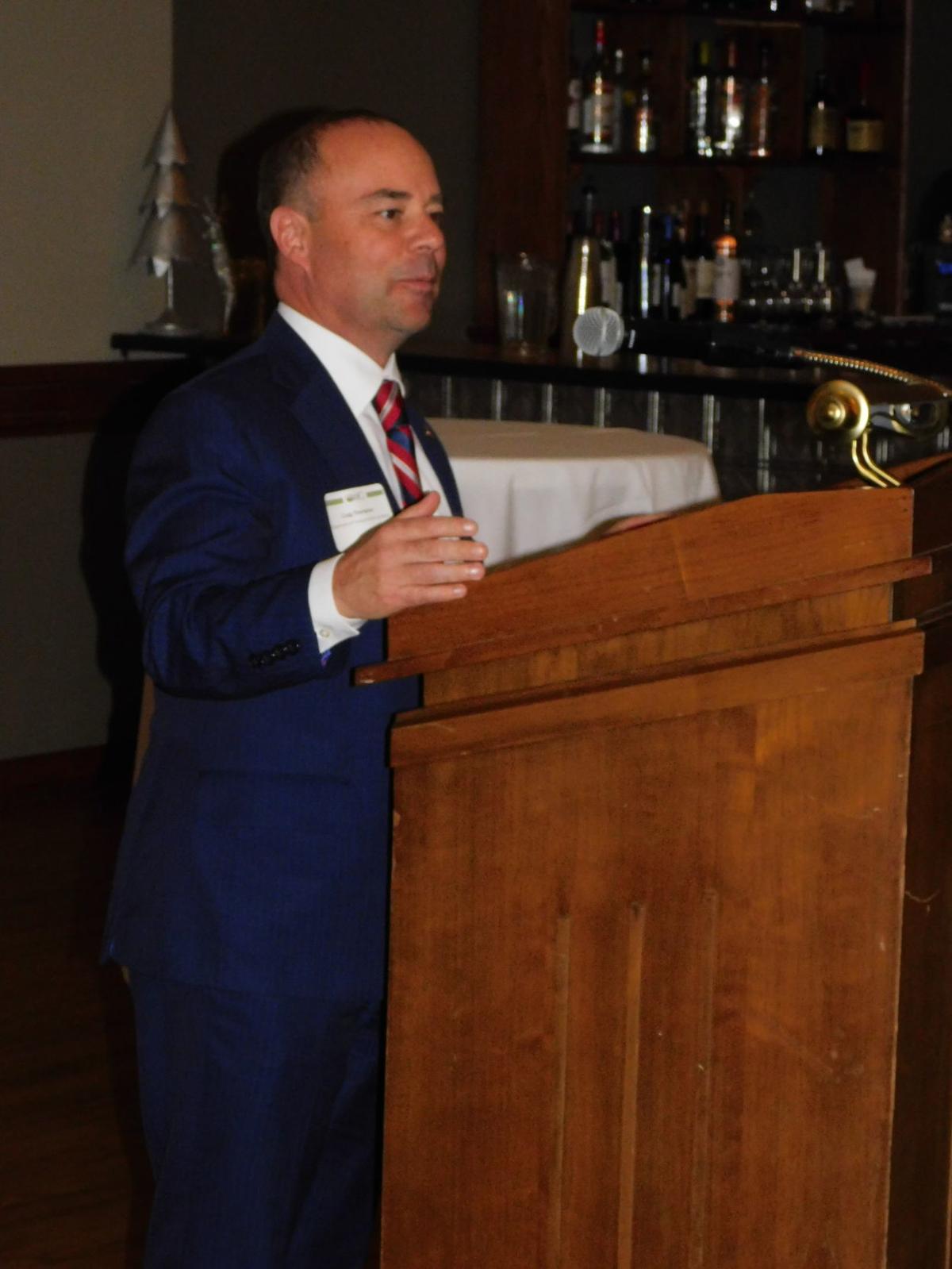 Wisconsin Transportation Secretary Designee Craig Thompson keynoted the Greater Whitewater Committee’s annual meeting Thursday night at the 841 Brewhouse in Whitewater. He is pictured above with members of the Greater Whitewater Committee Executive Board of Directors. From left to right are: Front Row — Thompson, GWC President Jeff Knight and Crystal Singer; Back Row — Russ Walton, John Laundrie and Larry Kachel.

Introduced by GWC member Jeff Knight, Thompson spoke at the 841 Brewhouse, covering a number of topics related to highway and road funding as it relates to the efforts of the state Transportation Stakeholder Task Force.

That task force consists of 36 members who represent industries, agencies and organizations from across the state. Knight is on the panel on behalf of the Association of Wisconsin Tourism Attractions.

Prior to being named DOT secretary by Governor Tony Evers, Thompson was the executive director of the Transportation Development Association of Wisconsin. Prior to leading TDA, he served as the legislative director for the Wisconsin Counties Association, managing legislative initiatives at the state and federal levels.

Thompson also commented on the U.S. Highway 12 corridor between Whitewater and Elkhorn, also known as the Red Line. The GWC, City of Whitewater and several Walworth County-based organizations have been advocating for an expansion of the Red Line from a two-lane to four-lane highway for many years.

The first step in that process would be to conduct and environmental impact study on that route.

At its Feb. 5 meeting, the Whitewater Common Council approved a resolution that states: “The City of Whitewater hereby supports the completion of the environmental impact study for the U.S. Highway 12 extension project” and “urges the appropriate elected officials make the project a priority and direct WisDOT to make a good faith effort to complete the study as originally directed in the state budget.”

The Red Line map was created in 1967 and included in the 2035 Jurisdictional Highway System Plan for Walworth County. The project also is included in the Southern Wisconsin Regional Planning Commission’s (SEWRPC) Vision 2050 Plan.

In the state’s 2013-2015 biennium budget, the state directed the DOT to complete the study for the project. However, in July 2016, the DOT cancelled the project, citing “financial constraints and overall WisDOT system needs,” as stated in the resolution. The project has been dormant since.

One of the most effective points in support of the study’s completion, Thompson said during his remarks Thursday, was that the University of Wisconsin-Whitewater is the only school in the UW System not accessible by a major highway.

Thompson also specifically noted that another important expansion project is Highway 23 near Sheboygan, and that when the country’s interstate system was built in the 1950s and 1960s, it was designed to last 50 to 60 years.

“We have now reached that point,” he observed.

“I would rather not be the secretary that efficiently managed the decline of our transportation system,” Thompson said. “I would much rather be the secretary that efficiently managed our investment in our transportation system to bring it up to the level we need for our tourism industry, our agricultural industry, our manufacturing industry.”

After his presentation and answering a few questions from the audience, Thompson spoke to several reporters from area media.

He elaborated a bit more on the U.S. Highway 12 situation after being asked how he would address the concerns of those affected by the expansion.

“If we did get to the point of saying we want to do an environmental impact study — we are not at that point yet — but if we did, that is the sort of thing the study would look at,” Thompson answered. “That means we are going to study the impact on those residents.”

Thompson noted that the environmental impact study could cost several-million dollars to complete.

“A study does not predetermine you will be doing a project, but you do not want to do impact studies on projects that you do not think have a reasonable chance of moving forward,” he said. “It is a very worthy project, we have fallen way behind and there is a glut there, but I think it is definitely one we will want to look at.”

The secretary-designee was asked that if the U.S. Highway 12 environmental impact study were authorized and completed, how long would the study take before the project would be under way.

“If everything went forward, you could maybe start breaking ground in about seven years,” Thompson estimated.

He also was asked what funding sources he willing to tap for road monies.

“When we brought the task force together, we looked at whether they wanted to transfer money out of the general fund, whether they wanted to look at tolling, or registration fees, or gas tax, or sales tax on cars and trade-ins, and some other — we had a broad swath,” he said. “I will tell you, we saw a lot of consensus on the user fees we have; we had the most consensus on a gas tax and second most was vehicle registration.”

Thompson said that state officials still are looking at the numbers, but he could not state how much any of those increases would be yet.

He commented further on open road tolling, as well.

“It is something that would take another study and more authorization from Congress,” he said. “It is not anything we are in a position to implement right now. We are open to looking at that as a longer-term solution.”

Thompson was asked if the Interstate 39/90 corridor between Madison and the Illinois state line remains on schedule.

“At this point in time, yes, I believe we are still on schedule,” he said.

“We had a little trouble with that near Madison on I-39/90. Some of the pavement has been coming up. So, we had to close down a lane for the last two days, but I believe we will have that problem fixed by tomorrow (Friday).”

Thompson said the immediate priority for Gov. Evers is to maintain current infrastructure.

“I think what you’ll see from the governor, when he introduces his budget on Feb. 28, a clear priority on trying to fix the roads we currently have,” he said. “Once we get into better shape, then we can move on to these areas where we need bigger improvement projects.”

Knight said he was pleased that Thompson was able to attend the GWC meeting.

“I worked with Craig at both the TDA and Accounting Association and can only say Craig Thompson is an outstanding choice for the secretary of the transportation department,” GWC President/CEO Knight said.

The GWC is an action-oriented group committed to working with citizens, elected officials and policymakers to identify, craft and implement a pro-business agenda.

The agenda advances the economic, education and social policies required to energize and secure the Whitewater area’s economic future, as well as protect Whitewater’s quality of life.

By working closely with the City of Whitewater, University of Wisconsin-Whitewater, Whitewater Unified School District and the local community, Whitewater can increase its visibility and become a beacon for business and leisure in the state of Wisconsin, Knight said.