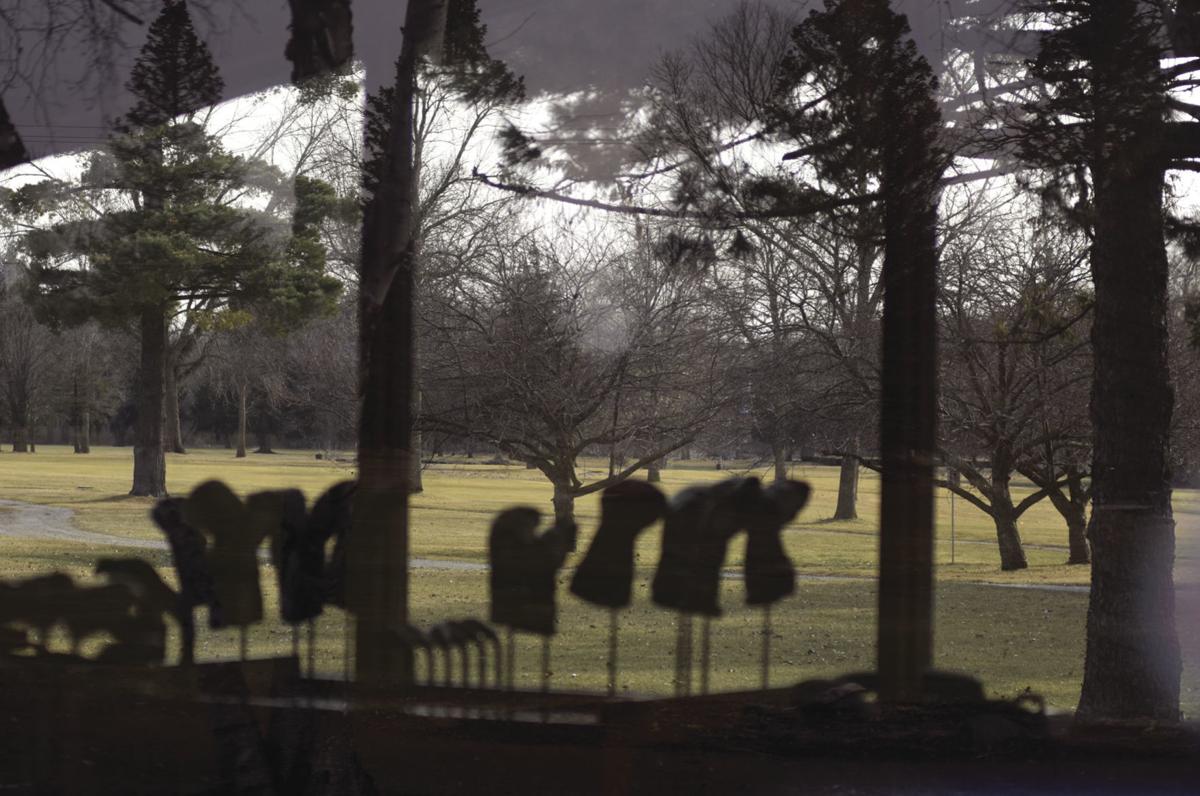 The front nine of the Watertown Country Club can be seen from its Pro Shop on Wednesday. Golfing around the state has been officially suspended after Gov. Evers clarified on Wednesday that golf courses are considered non-essential businesses and therefore must remain closed until “Safer at Home” restrictions are lifted. The Watertown Country Club golf course was supposed to open on Monday. 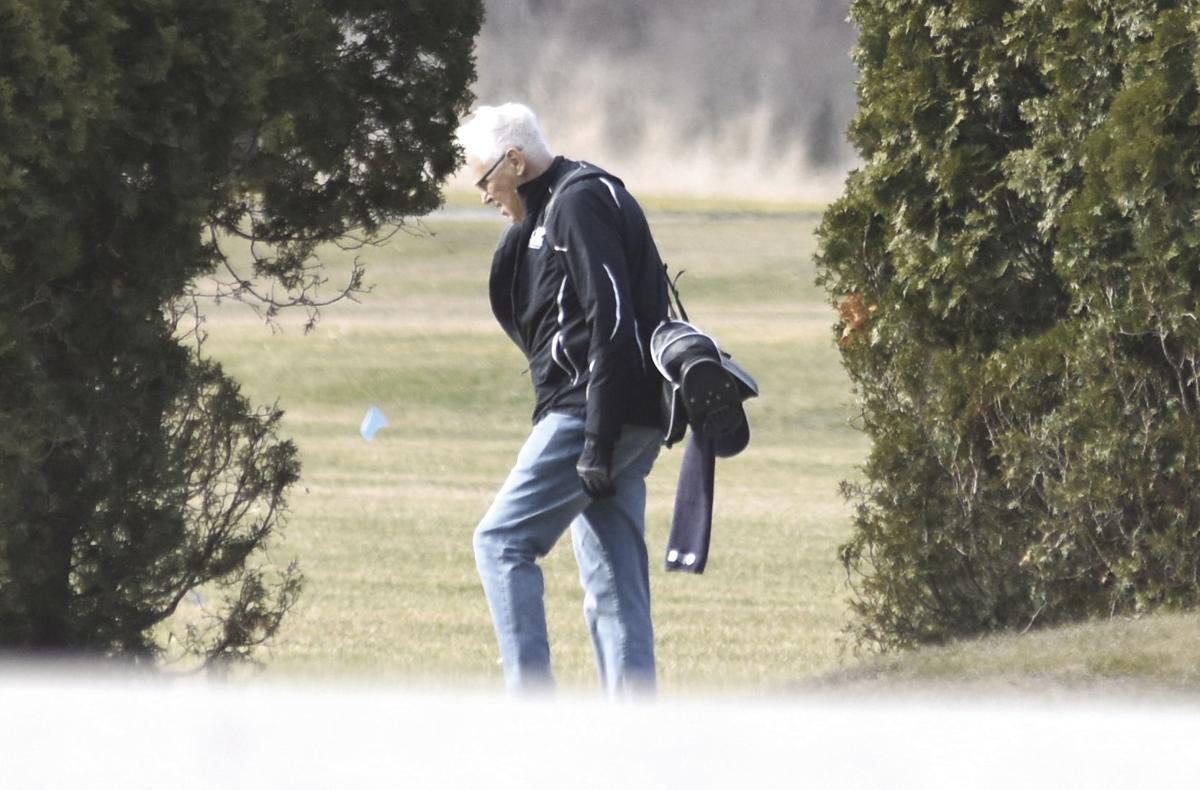 Watertown Country Club member Jim Krueger carries his golf bag on the back-nine earlier this week. Krueger wanted to get in some chipping and putting in advance of a potential suspension of the state’s golfing season, which became official Wednesday.

The front nine of the Watertown Country Club can be seen from its Pro Shop on Wednesday. Golfing around the state has been officially suspended after Gov. Evers clarified on Wednesday that golf courses are considered non-essential businesses and therefore must remain closed until “Safer at Home” restrictions are lifted. The Watertown Country Club golf course was supposed to open on Monday.

Watertown Country Club member Jim Krueger carries his golf bag on the back-nine earlier this week. Krueger wanted to get in some chipping and putting in advance of a potential suspension of the state’s golfing season, which became official Wednesday.

Jim Krueger knew time was potentially running short, so he took his golf bag and toured the edges of the Watertown Country Club golf course alone earlier this week.

“I came out to chip and putt a little bit,” Krueger said. “I’ve been a member here for 30-some years. We golfed all winter. Every Saturday morning, we had up to seven guys. We put stakes in front of the ground with the tees and used golf balls in the snow and played with hats and boots on.

“We’ve come out here since December. Since the social distancing, we haven’t played as a group any more. We just decided, guys, let’s just not take a chance. You can’t go down to the (clubhouse) bar to have a beer and a couple sandwiches any more, but people need to do something.”

As of Wednesday, “something” no longer includes golfing in Wisconsin.

Gov. Evers issued a statewide “safer at home” order in response to the COVID-19 pandemic on Tuesday, which included orders to close all non-essential businesses to the public. After requests for clarification over whether golf courses could remain open despite the clubhouses being closed, Evers directed people to his safer-at-home FAQs online, which state that “golf courses are not considered essential businesses. Staff can perform minimum basic operations as defined in the order.”

“It’s kind of a disappointing decision, but it’s nice that we can still maintain the course,” WCC Club Director Mike Quinlan said. “You’ve got to be able to keep the maintenance crews out there. The property is too expensive to not keep up.”

With proper maintenance, courses around the state will be playable whenever the statewide ban is lifted.

“We’re ready to move as soon as we can,” Quinlan said.

The coronavirus that leads to contraction of COVID-19 has been responsible for eight deaths in Wisconsin and 707 positive cases as of Thursday afternoon. In the United States, more than 1,000 people have died. The virus originated in Wuhan, China and now has been contracted by more people in the United States than in any other country.

In response to the growing threat of this coronavirus, the Watertown Country Club took the proactive step of closing its doors prior to its annual St. Patrick’s Day event earlier this month. A sign at the clubhouse informed members of the closing, with plans to re-open as soon as possible.

The hope was that at least the golf season itself could continue, as long as members followed social distancing guidelines. After all, Evers encouraged the public to enjoy the outdoors responsibly during this crisis. State Parks have remained open and all fees waived, and nearby places such as Lapham Peak in Delafield have been crowded as a result.

“We wanted to try to see if we could (open for the season) on Monday, but now we’ve kind of set that aside,” Quinlan said. “A lot of us are sad. I’m not going to lie. They are trying to do what’s right, but it’s frustrating. When you see 12 people sitting at a picnic table, it’s like, really?”

The Wisconsin State Golf Association sent a letter to Evers on Monday urging him re-consider and is continuing to push for a reversal on the golfing issue. Proponents for a change are pointing to positions in nearby states to bolster their argument.

Stay-at-home policies have been enacted by governors throughout the neighboring Midwest states, with varying rules regarding golf courses.

Golf courses in Ohio and Indiana have been allowed to remain open, with limitations. Raised cups on the green are a requirement in Ohio, to prevent golfers from reaching in to retrieve balls and risk contamination. Touching the flags is also forbidden there.

Minnesota Gov. Tim Walz ordered golf courses and all other businesses deemed non-essential closed until the end of today and possibly longer. The golf industry has been lobbying Walz to amend the order since golfers could practice social distancing of six feet from each other.

Illinois Gov. J.B. Pritzker made the same decision when he put forth his stay-at-home order late last week, but reversed course with an executive order Tuesday that allowed courses to re-open with restrictions starting Wednesday. Clubhouses remain closed and golf carts are not allowed. Only online or telephone scheduling is allowed. Golfers and staff must observe social distancing guidelines at all times while at the golf course.

“I just don’t understand,” Krueger said. “We got an email which said the USGA will try to contest it. Even guys who come as a group, you stand apart. As long as people are being responsible, I don’t see why (we can’t start the golf season).”