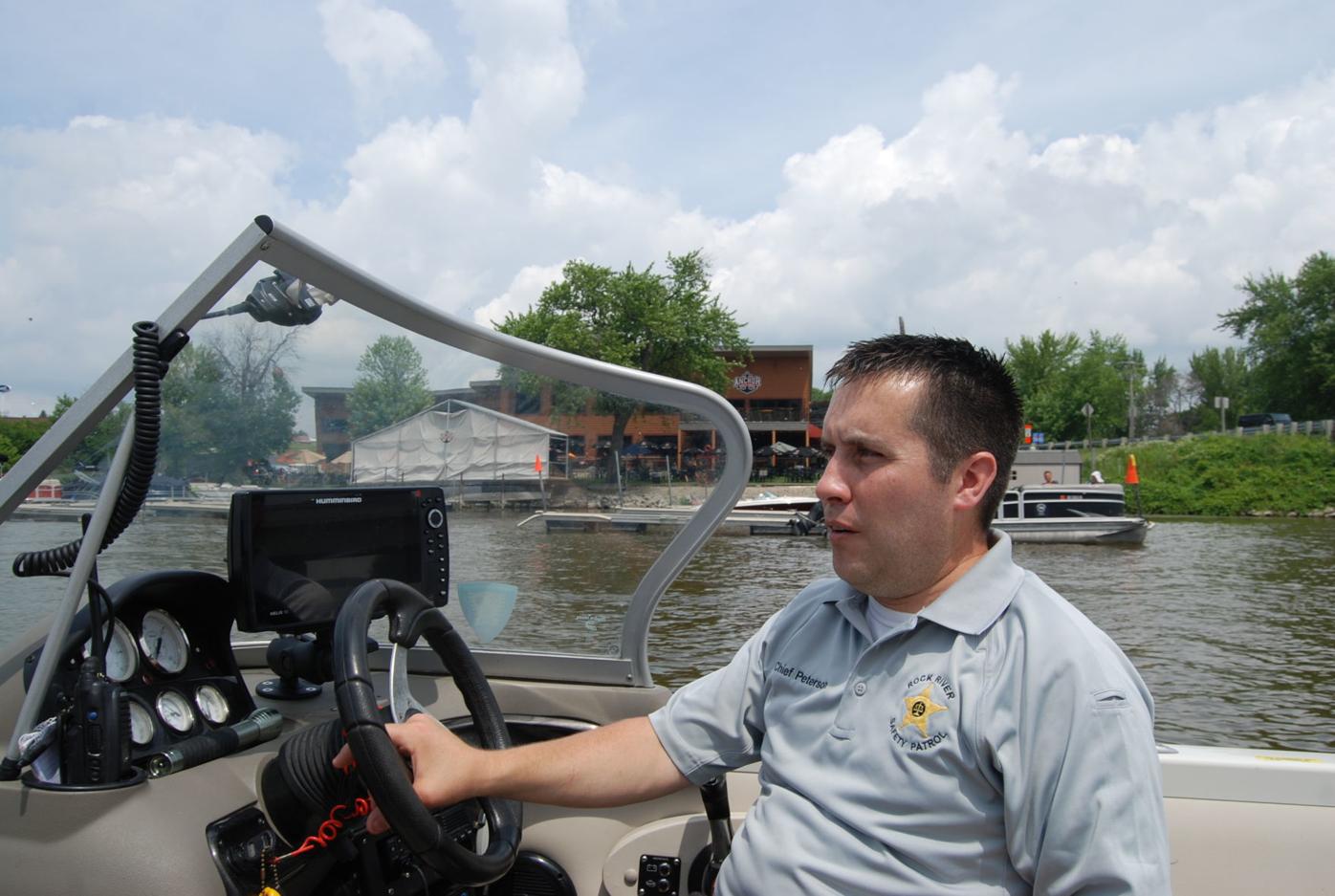 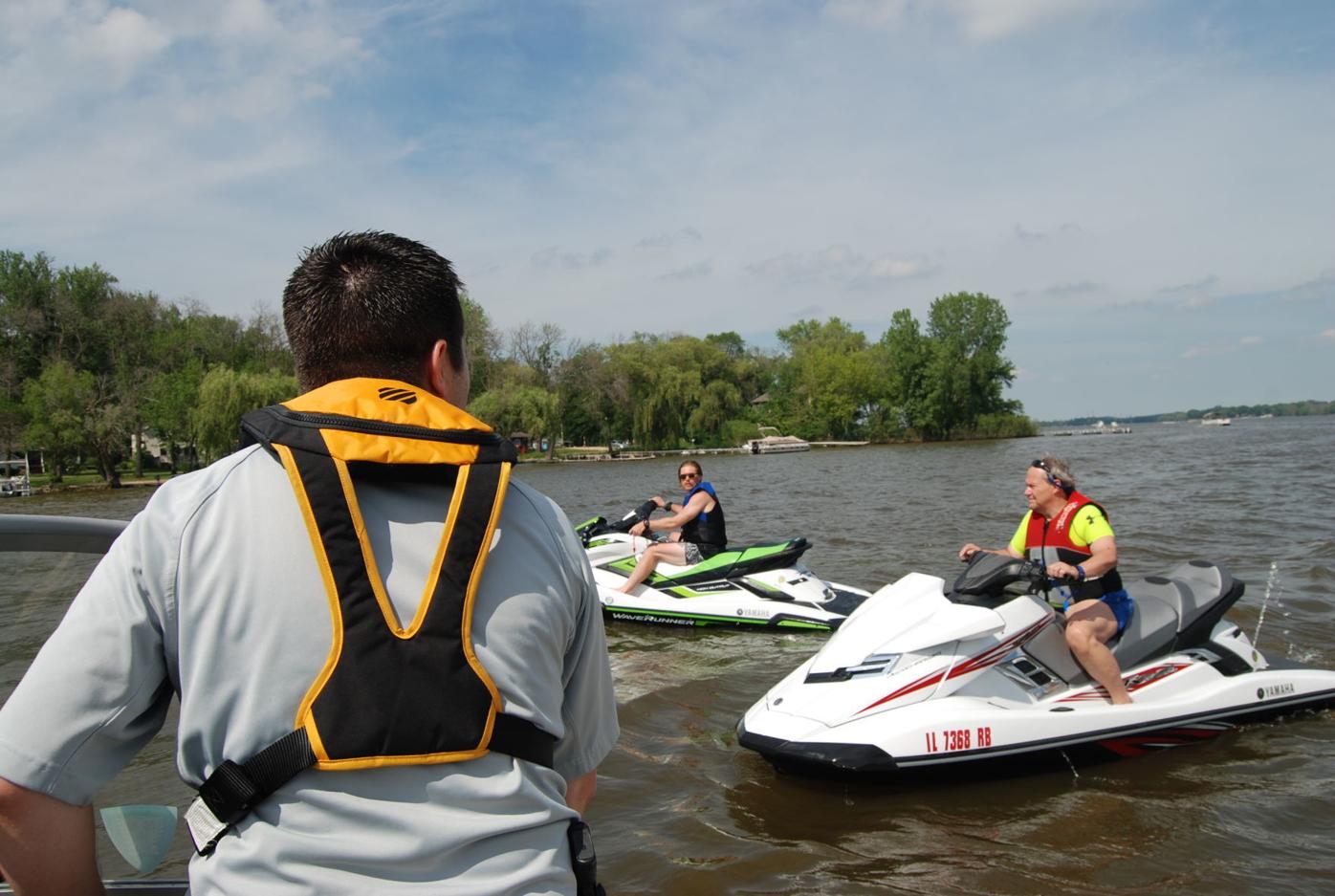 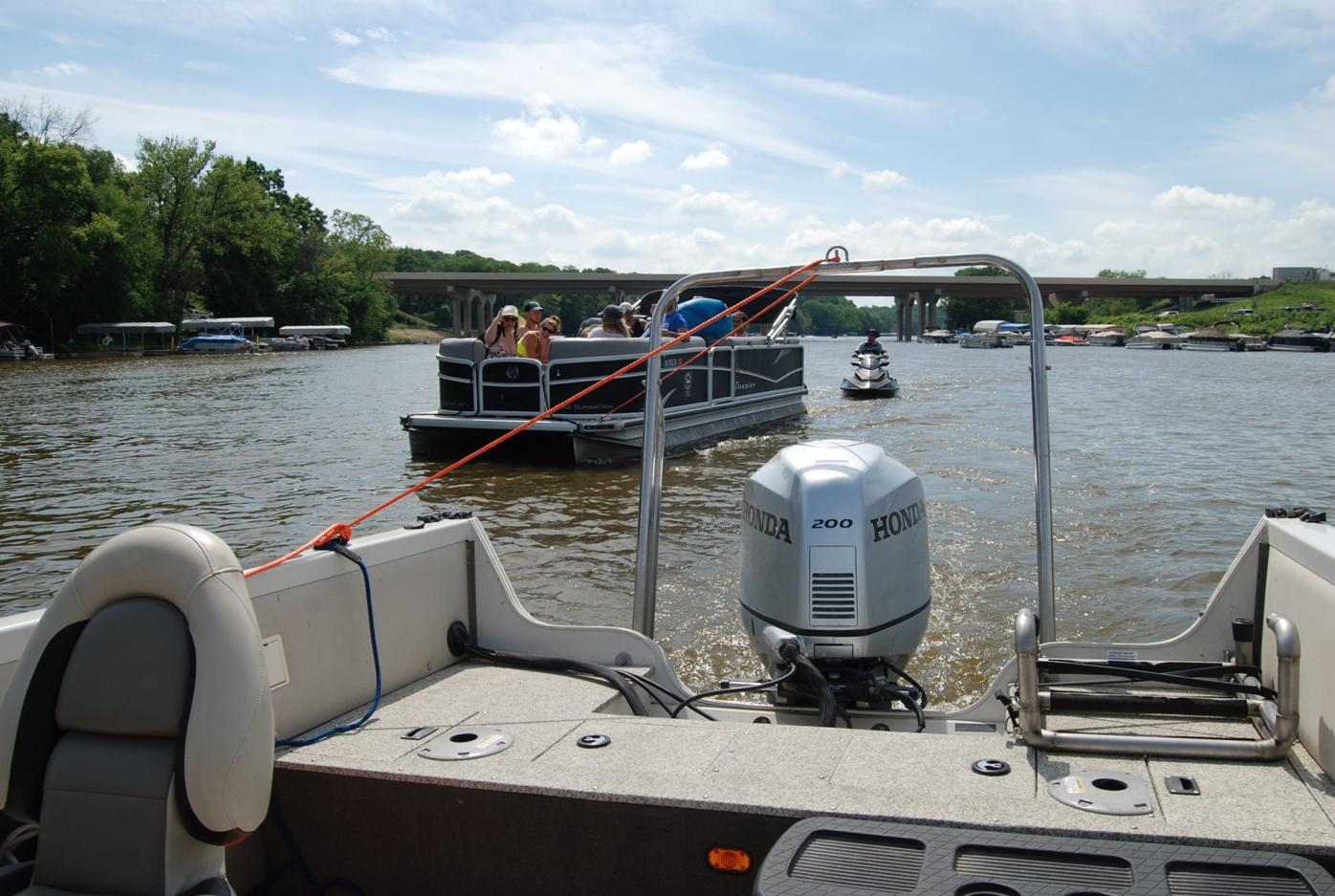 After being flagged down for help by boaters, the Rock River Safety Patrol tows a pontoon boat no longer under power back to its dock of origin. 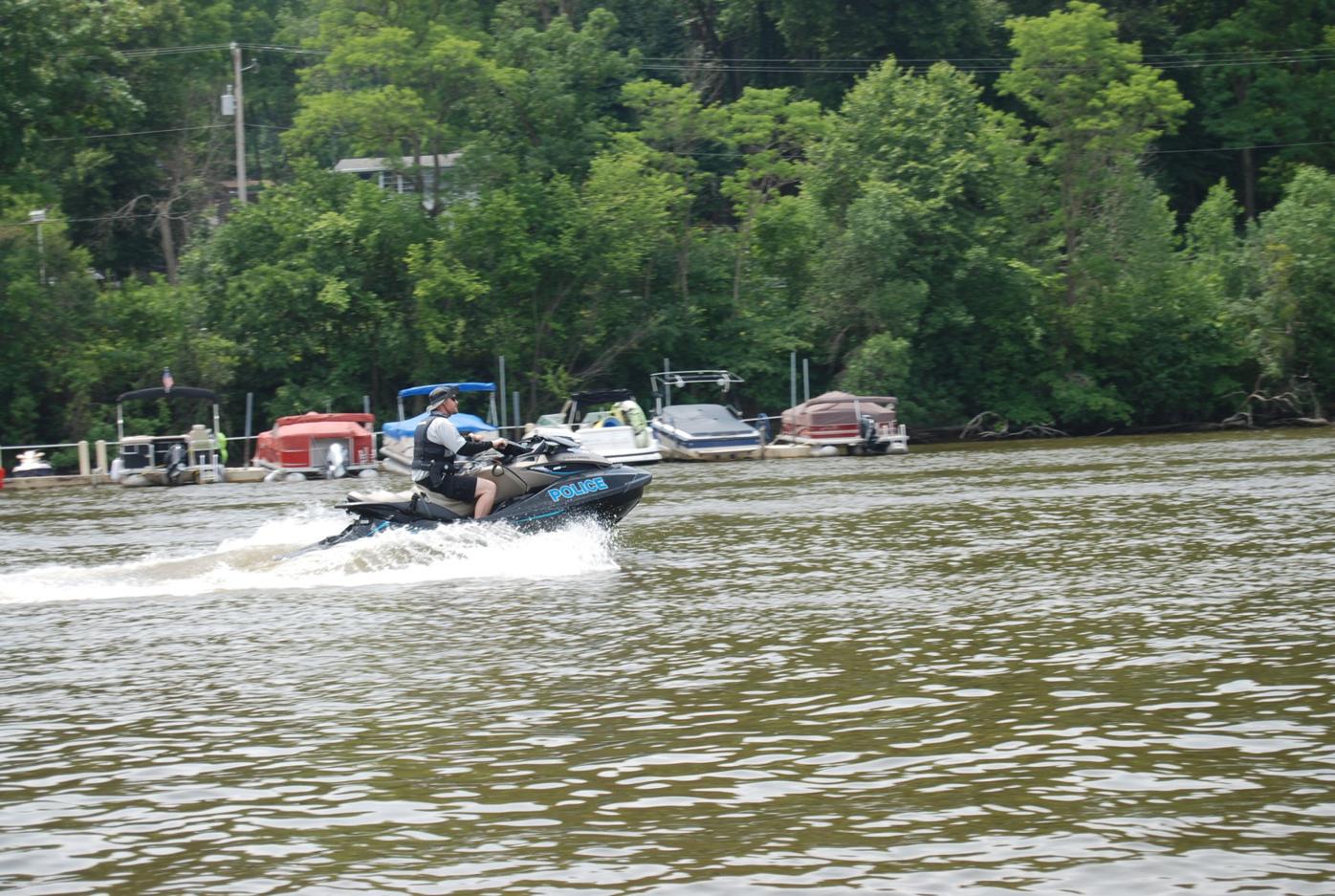 After being flagged down for help by boaters, the Rock River Safety Patrol tows a pontoon boat no longer under power back to its dock of origin.

With waves of heat come waves of boat traffic on Lake Koshkonong and the Rock River.

And this year, perhaps due to increased interest in outdoor recreation after staying "safer at home" to curb COVID-19, boating traffic is on the increase.

Ryan Peterson, a member of the Rock River Safety Patrol (RRSP) for 15 years and chief for three, shares leadership responsibilities with Capt. Henry Sautin, a retired Rock County deputy whom he described as instrumental in maintaining the patrol while helping to develop its leadership.

The patrol has been in service for over 40 years.

Peterson said that the lake and river traffic last weekend was the busiest he’d seen over a Fourth of July holiday.

While the traffic is increasing, the patrol’s commitment to safety remains constant, as does its practice of offering prevention over punishment: Peterson said the 12 sworn officers on the patrol, on average, hand out more boater safety pamphlets and warnings than they do tickets.

The practice is a kind of community policing focused on boater safety while building trust and communication through a sense of fairness, Peterson said.

An Adams Publishing Group reporter rode along with the patrol Sunday, June 28, a day Peterson described as “well-populated.”

“It is much busier then other years in June," he said. "June, in general, is always fairly slow. People have graduations and weddings. This year, that has not been the case at all.

“We are hearing from the marinas that they are having parts ordered for boats that haven’t been out for years,” Peterson continued, adding that he believed some of that interest was driven by COVID-19 and people’s interest in finding safe outdoor recreation.

“There are a lot more people on the water. COVID has changed people’s mindset and gets them out,” Peterson said.

The Rock River Safety Patrol is responsible for law enforcement, water rescues and recoveries across the 10,500 acres of Lake Koshkonong and 26 miles of the Rock River, covering surface from Jefferson County to Indianford, in Rock County.

“We like to say dam to dam,” Peterson said.

It also patrols Clear Lake in Milton, he said.

Members of the patrol operate part time, working to cover high-traffic days from two vehicles: a 21-foot Crestliner boat and a Sea-Doo personal watercraft (PWC). The boat is equipped with supplies similar to those used by fire departments, Peterson said.

While driving the boat, Peterson remained in contact through radio with Patrol Officer Mike Herman, who operated from the PWC. He also was in communication with Rock and Jefferson county sheriff's office dispatch units through a separate radio.

“Sunday is usually quieter than Saturday," Peterson said, describing boat traffic. "A typical weekend two years ago, Saturday would be busy. Today (June 28), at its busiest point, would have been a typical busy Saturday.

“Traffic is up dramatically,” he said.

The nature of the lake, offering diverse appeal in a variety of activities, and its proximity to Illinois, contributes to its popularity, he said.

Over the course of the day, several PWC operators approached the patrol with questions about boater safety. Peterson and Herman were eager to share safety rules and tips, handing out boater safety pamphlets with frequency. Multiple verbal warnings and about five written warnings were issued to PWC operators.

In the afternoon, the patrol, along with members from area fire departments, responded to a dispatched call to help locate and rescue a distressed swimmer. The individual was found and taken to the Rock River Marina in Newville.

A group aboard a pontoon boat, describing trouble with the motor, was towed by the patrol back to its pier of origin.

Addressing concerns of safety and law enforcement, Peterson said, “We’ve had more stops in June than we typically have because more people are here. They are new people and they don’t always know what’s expected of them.”

Many are new to boating and others are unsure of differences between their state of residency and Wisconsin laws, Peterson said.

"Most people out here are here to have fun," Peterson said. "We make sure other people won’t put them in danger. We like to give them a DNR (Department of Natural Resources) pamphlet with a general overview of the rules while they are in Wisconsin.”

Of the list of 25 citeable infractions, Peterson said, the one most violated revolves around watercraft and their proximity to shorelines and other vehicles while in the water.

The rule requires PWCs to be at least 100 feet away from other craft and 200 feet away from the shoreline when operating above slow-no wake speed. Violation of the rule carries a fine of $230.

“One-hundred feet is one-third the size of a football field. People are not always good at estimating that,” Peterson said.

The patrol gives warnings, often verbal, with the goal of helping people understand the rule and promote safety.

“If we give them a ticket, it’s a serious safety violation. We give a lot of warnings,” Herman, a member of the safety patrol since 2012, said.

Both Peterson and Herman said they advocate teaching people to be safe. On average, they said, they give six to eight verbal or written warnings before writing a ticket.

Over the summer tourism season, the patrol typically writes between zero and eight tickets each weekend, Peterson said.

“So we can expect kids to take off from shore and be too close. Some have no life jackets on board and no throw rings," he said.

“They do not always have registrations. It makes me think they are new boaters. They make mistakes when we are right next to them and they have no idea what they’ve done until we flag them over.

“They are understanding when we explain it to them,” Peterson said.

Peterson said he believes the community sees the patrol as helpful and fair.

“Some people think the police are in need of a wake-up or a shake-up, but we don’t get any of that feedback. We are well received," he noted.

“I don’t have to nitpick boats. There are plenty of violations happening right in front of us and they don’t question us. They know they did something wrong. There is mutual respect. We’re fair. When we write a ticket, it is a legitimate ticket,” Peterson continued. “We want the right balance of fairness.”

When giving warnings or tickets, Peterson said, alcohol is not usually involved.

“I have yet to stop somebody for being under the influence. They are just usually using bad judgment,” Herman said.

“You can drink while driving a boat; you just can’t be drunk,” Peterson said, adding that the affects of alcohol are amplified by the waves and the heat.

“Someone might appear more drunk after having very little to drink,” he said.

Over the course of his 15 years with the patrol, Peterson said, he might have seen 12 people who were intoxicated. Four went to jail.

A motorboat driver can be cited for drunken driving if he or she has a blood alcohol content of 0.1 percent or greater. That is higher than the 0.08 percent limit for motor vehicle drivers.

Drunken drivers are removed from their boats and taken by the patrol to shore, where they are placed in the custody of county deputies.

The patrol uses GPS to determine which county’s jurisdiction they are in at the time of the stop.

The biggest portion the river they patrol is in Rock County. The biggest area, including most of the lake, is in Jefferson County, Peterson said.

The patrol operates on an annual budget of about $38,000, with about 70 percent of those funds coming through the Department of Natural Resources. The rest is funded through the five towns that make up the Rock-Koshkonong Lake District (RKLD), including Milton, Fulton, Koshkonong, Albion and Sumner, although funding does not come through the RKLD, Peterson said.

The patrol is part of a multijurisdictional program, working and training alongside the Edgerton, Fort Atkinson, Lake Mills and Milton fire departments.

A Boat Board, which has one representative from each of the five towns contributing funds, governs the patrol, Peterson said.

Rock River Safety Patrol Sgt. Jim Jelinek is a Milton Firefighter, an EMT and a commissioner on the RKLD board, he added.