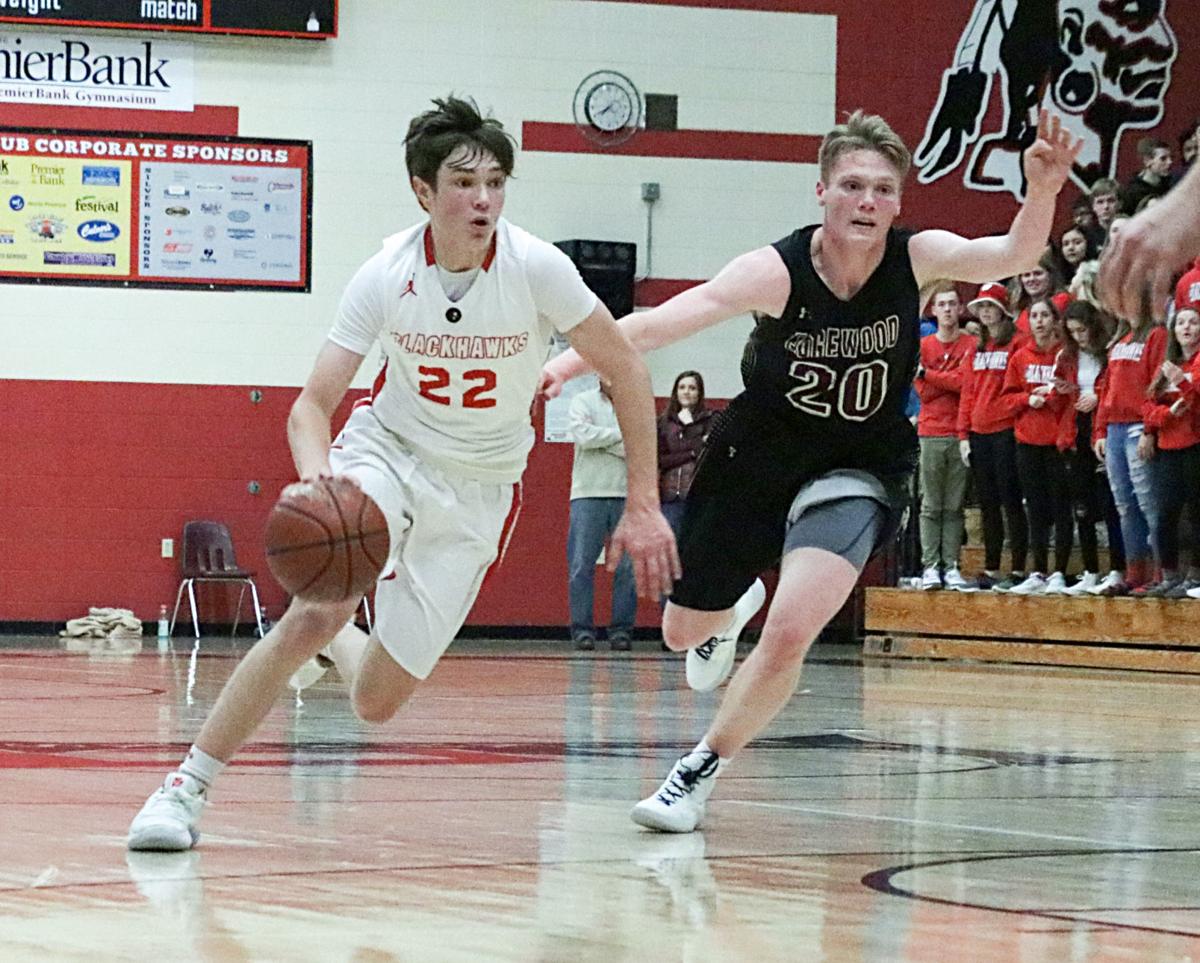 Grey Wixom drives to the basket for Fort Atkinson in the first half against Madison Edgewood. Wixom scored a team-high 13 points in the 63-55 victory on Friday night. 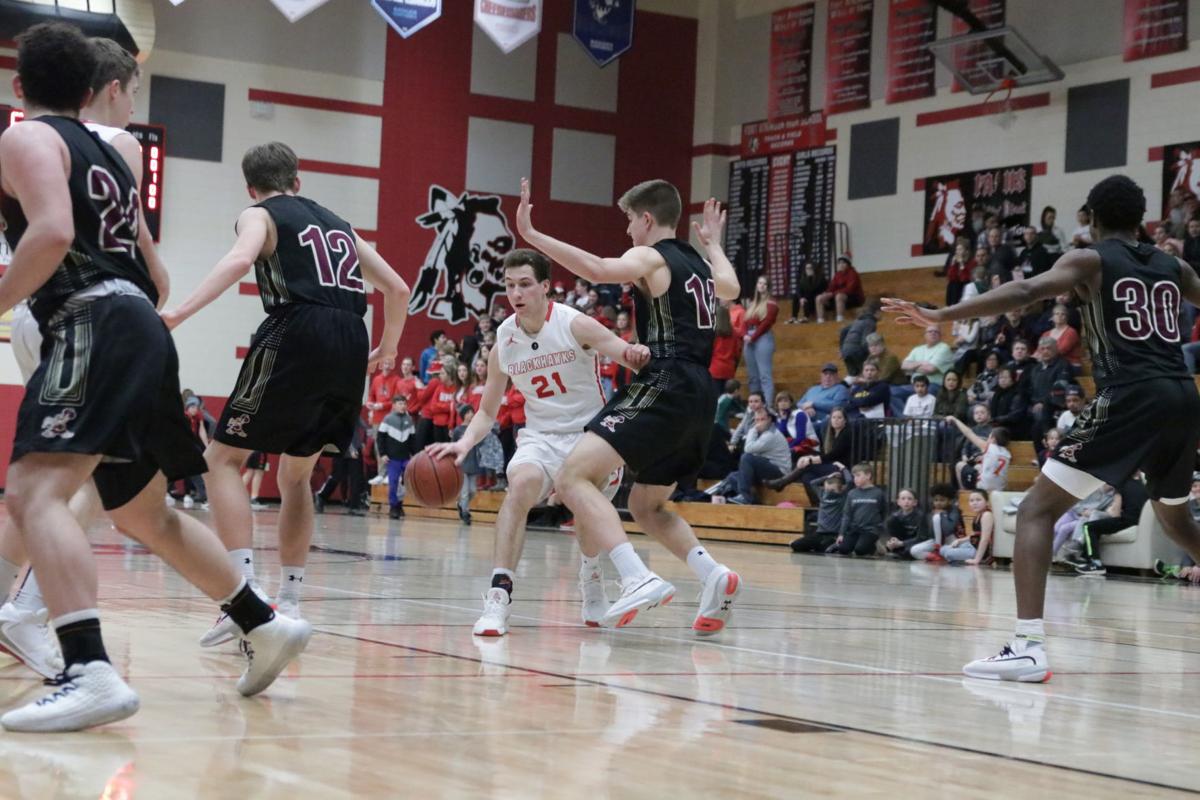 Caleb Haffelder scored 10 points in the first half for Fort Atkinson to help the Blackhawks earn a 63-55 victory against Madison Edgewood on Friday night.

Grey Wixom drives to the basket for Fort Atkinson in the first half against Madison Edgewood. Wixom scored a team-high 13 points in the 63-55 victory on Friday night.

Caleb Haffelder scored 10 points in the first half for Fort Atkinson to help the Blackhawks earn a 63-55 victory against Madison Edgewood on Friday night.

Greyson Wixom was called for a travel with 63 seconds left and the Fort Atkinson Blackhawks leading by two points.

Madison Edgewood missed a 3-pointer in the ensuing possession that would have given the Crusaders the lead.

From there, the Blackhawks held visiting Madison Edgewood off the scoreboard and earned a 63-55 victory in a Badger South boys basketball game on Friday night in front of the biggest crowd of the year gathered to celebrate Youth Night and three new inductees to the Wall of Fame.

The Crusaders (5-10, 3-5 Badger South) did not make a basket against Fort Atkinson (3-12, 1-8) in the final 3 minutes, 59 seconds of the game when Madison Edgewood tied it at 51 and called a timeout to switch to a trapping defense.

On the first possession against the trap, sophomore Cade Cosson found junior Jackson Fenner in the corner and he drove baseline for a layup. Cosson made a shot from one stride lower than the elbow in the next possession to extend the lead to 55-51 with 2:50 to play.

“They were really vulnerable (in their zone) once you get the ball in the middle,” Fort Atkinson coach Mike Hintz said. “When we got the ball to the middle with Cade — we trust Cade heavily in the middle there in that spot and when you have Logan (Kees) and Caleb (Haffelder) on the court and they’ve made shots, they have to honor the shooters and Cade and Jackson took advantage of it.”

Fort Atkinson was able to put the win together despite being without sophomore guard Carson Baker, who leads the team with 11.1 points per game. Baker was out with an illness.

Wixom made two 3-pointers in the first half and finished with a team-high 13 points. Fenner scored 12 points in the second half and Cosson finished with 12.

“The ball movement was really well tonight,” Hintz said. “The kids weren’t looking to pass the ball to Carson. They were moving the ball and looking for the open shots. We made some tweaks in the last couple of weeks to get Cade more involved because he was one of our best players last year as a freshman and we need to get him some more confidence with some easy sets.”

Madison Edgewood made nine 3-pointers in the game. Isandro Jimenez made five 3-pointers for the Crusaders and finished with a game-high 17 points.

Michael Regnier made the ninth 3-pointer to tie the game at 51 with 3:59 to play. The Crusaders didn’t make another basket the rest of the game — they made four free throws.

“The biggest difference was that we really emphasized getting outside and making them go inside,” Hintz said. “At that point, we decided to pull Drew out and go offense defense with him with Logan on the inside, so that Drew wasn’t standing in the post as much. It gave us a little bit more mobility and that helped a lot.”

It was the first home win in Badger South action since December 19, 2017. The Blackhawks had lost 16 consecutive home games in league play. Hintz optimistically described this win as a potential turning point for Fort Atkinson, which relies heavily on production from four sophomores, two juniors and three seniors.

“You know when you have teams with young players, you look back and find the aha moment when things started to click and hopefully we’ll look back and this is that moment for this group,” Hintz said. “I love this group. They’re doing the right things and they’ve just had close losses. The last week of practice has been a great week with everyone buying in. Hopefully this is a turning point and we can be excited throughout the month of February.”

Fort Atkinson will continue its season at home Tuesday against Delavan-Darien at 5:45 p.m. The girls basketball teams will play afterward at 7:15 p.m.