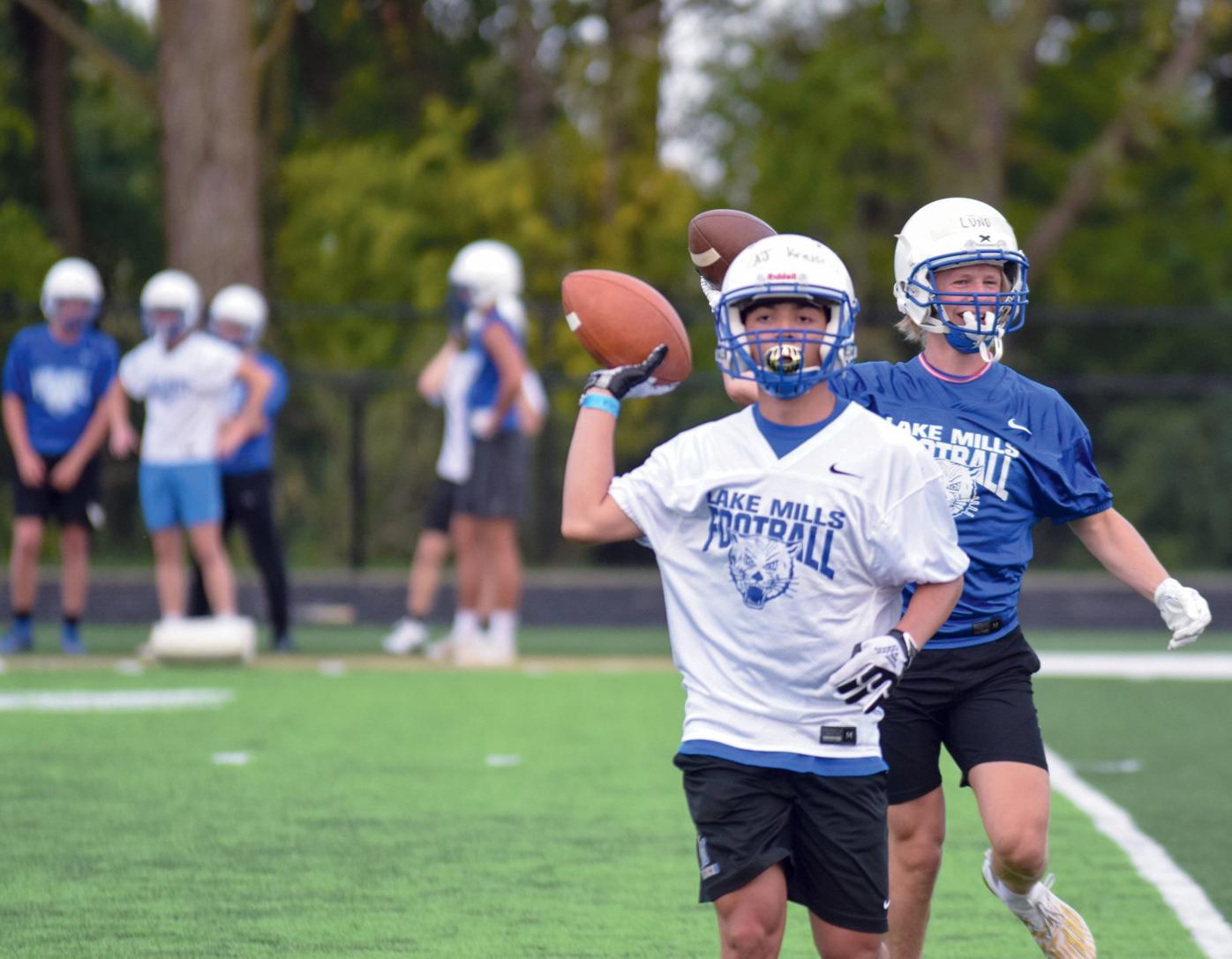 Lake Mills football players at the team’s first practice of 2020. Tyler Huber enters his first season as the head coach with the L-Cats and has standout senior Adam Moen under center. 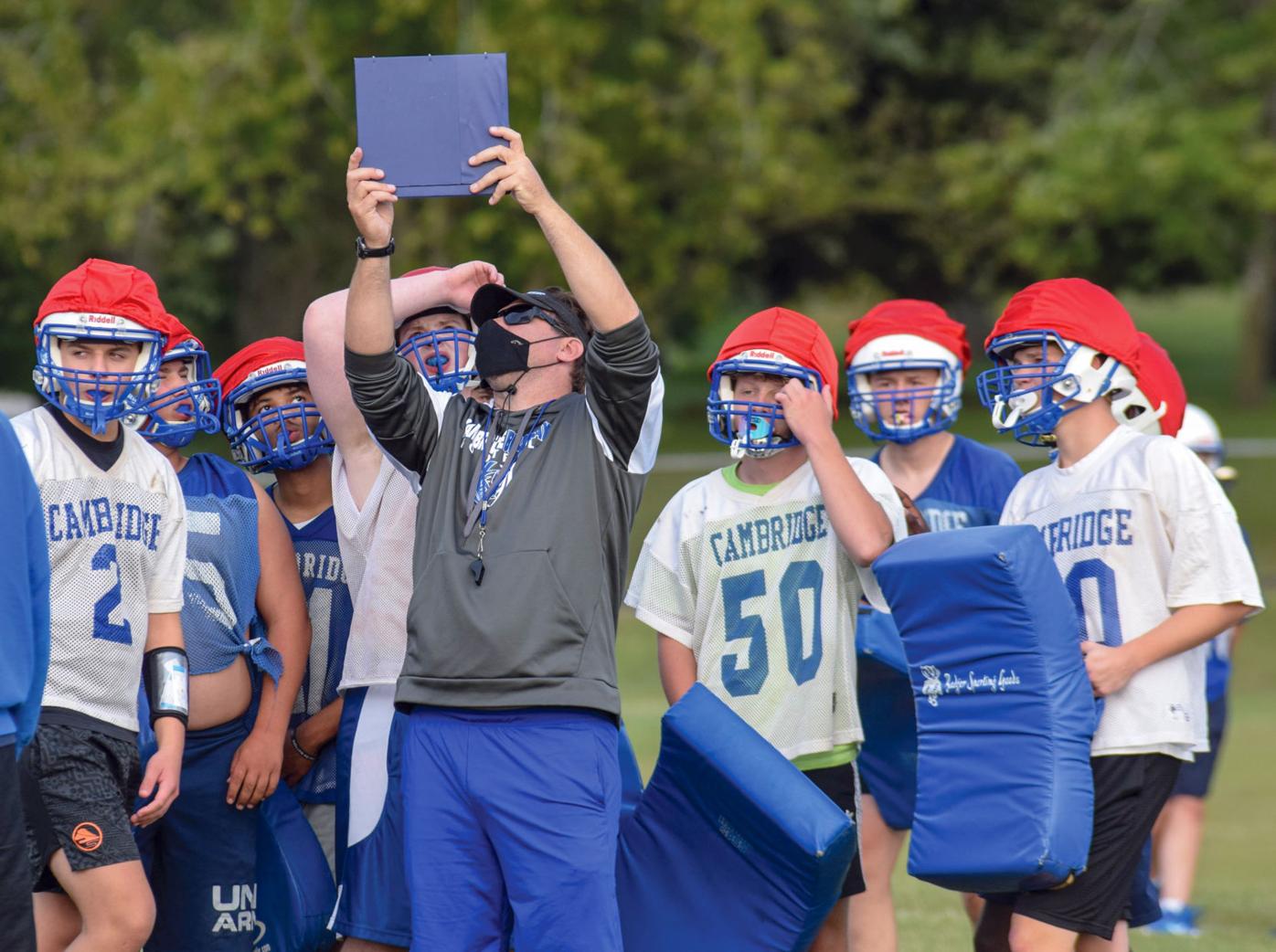 Cambridge players gather around a coach during the team’s first practice of the season. The Blue Jays went 9-2 last season and won a Division 6 level 1 playoff game. 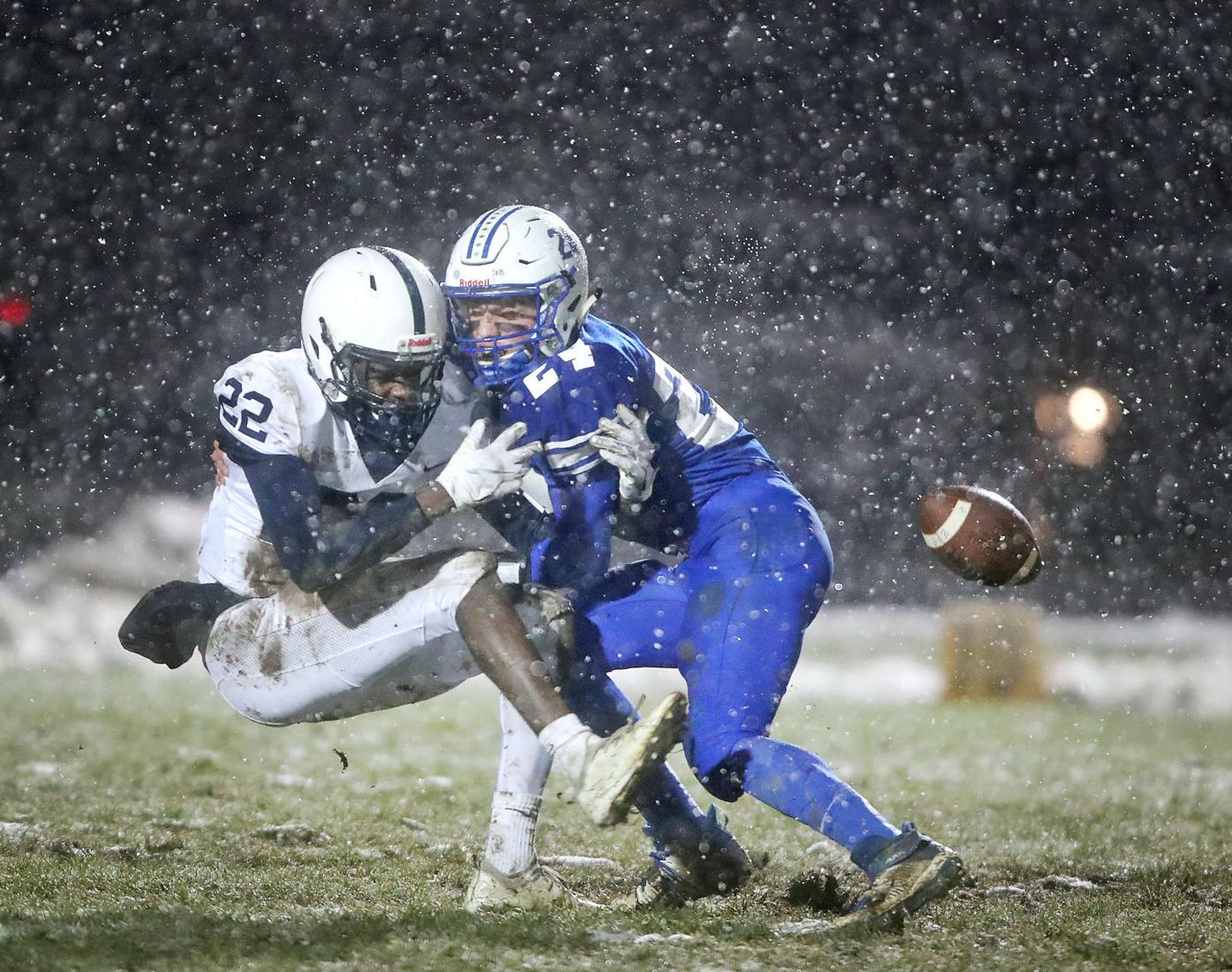 Evansville’s Ryan Borchardt knocks Lakeside Lutheran’s Tersony Vater away from the ball during first half of their Level 2 WIAA Division 4 playoff game in Evansville during the 2019 season.

Lake Mills football players at the team’s first practice of 2020. Tyler Huber enters his first season as the head coach with the L-Cats and has standout senior Adam Moen under center.

Cambridge players gather around a coach during the team’s first practice of the season. The Blue Jays went 9-2 last season and won a Division 6 level 1 playoff game.

Evansville’s Ryan Borchardt knocks Lakeside Lutheran’s Tersony Vater away from the ball during first half of their Level 2 WIAA Division 4 playoff game in Evansville during the 2019 season.

Coach’s resume: Tyler Huber — a former UW-Whitewater receiver — will enter his first year as a head coach at Lake Mills. He was previously was an assistant for Johnson Creek.

Top returners: Lake Mills returns a talented senior class, none more than the 2019 Offensive Player of the Year in the Capitol Conference North Division, Adam Moen.

Moen eclipsed the state record for most combined passing and rushing yards with 4,477. He threw for 3,517 yards and 39 touchdowns and ran for 960 yards, scoring 21 times on the ground. His 60 combined touchdowns were thought to be second-most in state history behind Cedar Grove-Belgium’s Josh Weiss’s 65 in 2016.

Departing players: Lake Mills lost three starters on offense and two on defense. A talented junior class and a deep sophomore class will look to fill those spots, according to Huber.

Season thoughts: “Looking forward to this season and watching these boys play,” Huber said. “The last nine weeks the boys have been working hard in the weight room and are ready.”

Coach’s resume: Mike Klingbeil comes back to Cambridge for year 15. Klingbeil has collected an 88-57 record in his first 14 seasons with the Blue Jays.

“We have a very strong class of juniors willing to step up,” Klingbeil said. “Some of them played one way last year and will play two ways this year.”

Klingbeil specifically noted junior Trey Colts should be an impact player for the Blue Jays this season at running back and defensive back.

Last season’s recap: Lakeside Lutheran was tied with Spring Green in the fourth quarter of a Division 4 level 3 playoff game, but the Warriors ended up falling in the road game to end its season. Overall, Lakeside finished 7-5 on the season.

Coach’s resume: Paul Bauer enters his 20th season with the Warriors, collecting a 126-70 record so far.

Top returners: Key returners for the Warriors include Tersony Vater, Micah Cody, John O’Donnell, Nathan Chesterman and Will Jorgensen. Vater was second on the team in receiving yards last season with 466, while Cody was third on the roster in rushing yards with 433.

Chesterman was second in tackles on the team with 87, while Vater and Cody also were top five in tackles.

Season thoughts: “It won’t be a normal season, but we’re glad to be trying to give the boys a fall football experience,” Bauer said.

Last season’s recap: Johnson Creek upset No. 3 seeded Winnebago Lutheran in the first round of the Division 6 tournament. The Bluejays went on to lose to eventual Division 6 champion St. Mary’s Spring Fond du lac in level 2.

Coach’s resume: Head coach Tim Wagner has been at the helm in Johnson Creek for over three decades, making this season his 34th year. He enters the season with a 183-139 mark.

Top returners: Howie Olszewski takes over as Johnson’s Creek leader as well as the feature back this season. Olszewski averaged 7.1 yards per carry last season for the Bluejays.

Bow Hartwig — who Wagner described as a tremendous athlete — will be a two-way contributor for Johnson Creek. Wyatt Owen returns as a tight end threat and a mobile linebacker for the Bluejays, while Sam Toebe will be a leader on both the offensive and defensive lines.

Season thoughts: “We obviously are very excited about the opportunity to play,” Wagner said. “We should be really competitive this year. Our goals are always the same in regards to competing for a conference championship and advancing into the playoffs. We lost an outstanding group of seniors from last year, but we are excited about the upcoming players in our program.”

Last season’s recap: Palmyra-Eagle’s air raid matched up with a stout Cambridge defense in level one of the Division 6 playoffs last season, but the Panthers came up short. Palmyra-Eagle finished 7-2 and second in the Trailways Large.

Coach’s resume: Carey Venne enters his first season as the Panthers’ head coach. He has collected an overall head coaching record of 103-35. He took Cudahy to a state title in 1994.

“They will lead a group that looks to be very versatile and football savvy,” Venne said.

Calderon — an-all state basketball player — and Eddy look to be some of Palmyra-Eagle’s biggest threats on offense at tight end and wide receiver, respectively.

Departing players: The Panthers lost one of the state’s top passers — Brandon Wilde — and his favorite target Danny Hammond. Wilde passed for 2,932 yards last season, while Hammond was second in the state with 83 catches. He will play wide receiver at DIII powerhouse UW-Whitewater.

The Panthers also lost key contributors on their line.

Chance Scheel and Joey Brown will look to take over Wilde’s duties this season at quarterback. Levi Carpenter, Ryan Carpenter and Jacob Hammond will be impact players out of the backfield for the Panthers as well.

Season thoughts: “I am so happy that our seniors as well as those on other teams will get an opportunity to play this fall,” Venne said. “The WIAA has given all schools a chance to compete.”