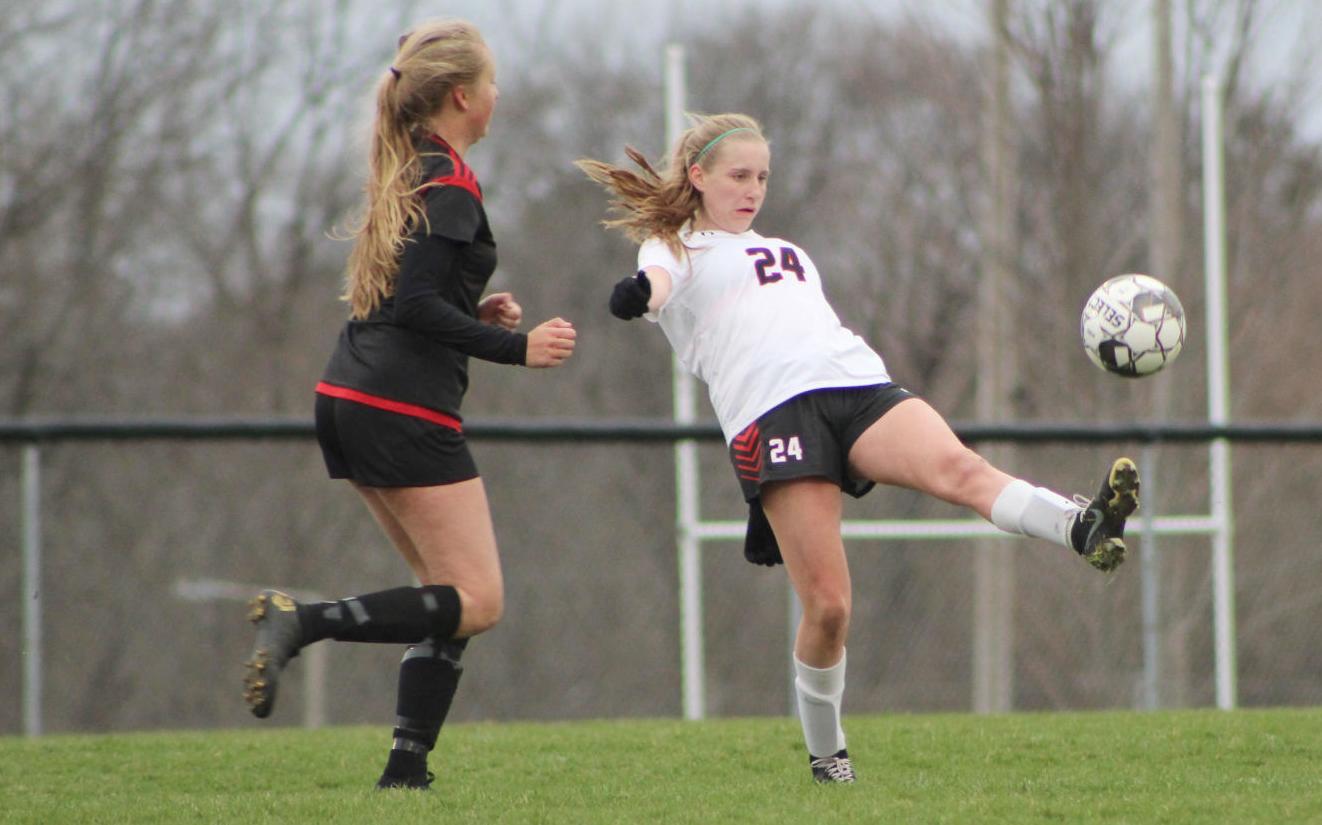 Fort Atkinson’s Alexa Dahnert controls the ball during a Badger South Conference game against Milton in the 2019 season. 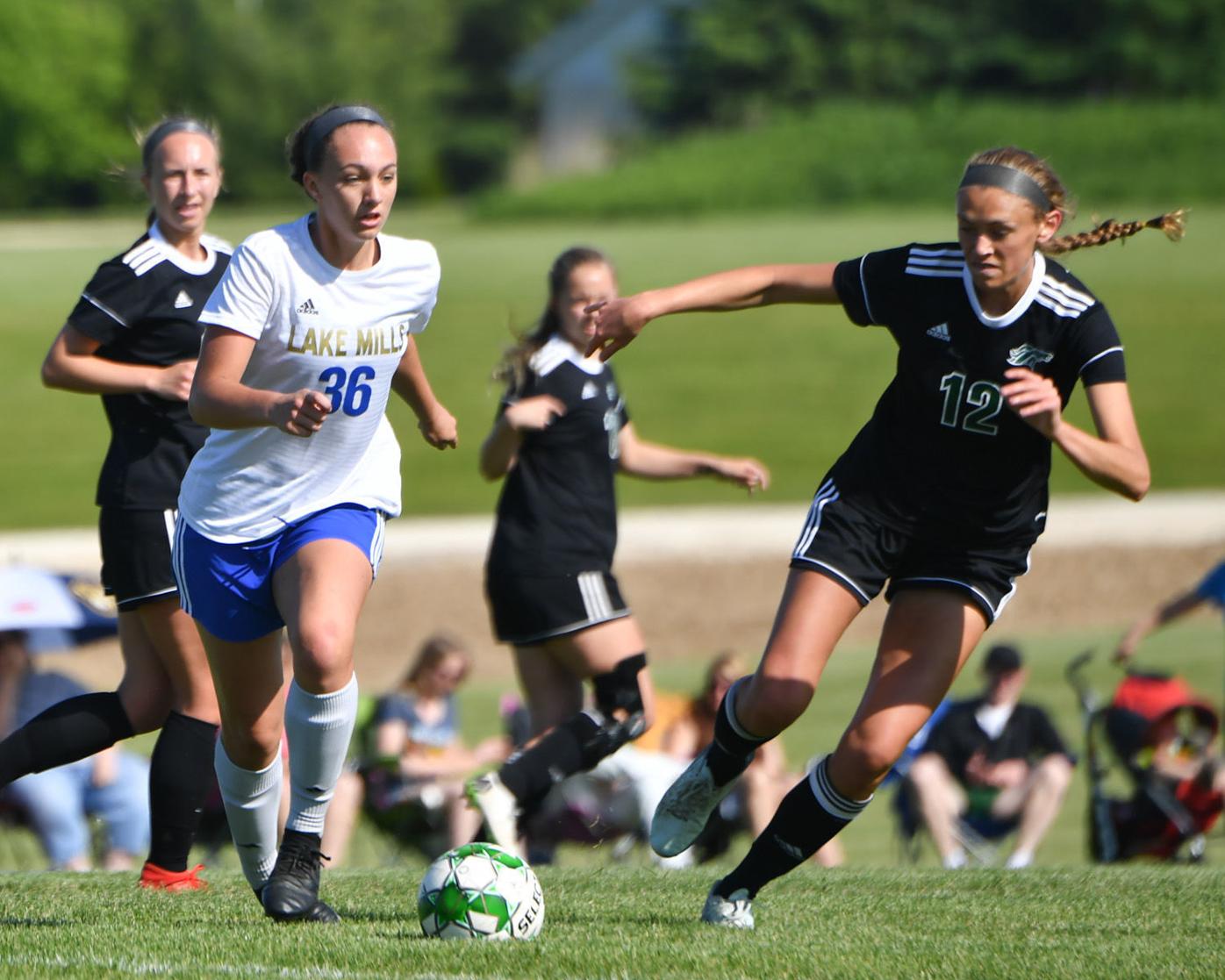 Lake Mills’ Ava Stelter was named Capitol Conference Player of the Year as a freshman.

Fort Atkinson’s Alexa Dahnert controls the ball during a Badger South Conference game against Milton in the 2019 season.

Lake Mills’ Ava Stelter was named Capitol Conference Player of the Year as a freshman.

2019 recap: The Fort Atkinson girls soccer team went 13-9 and collected a 2-5 record in the Badger South. The Blackhawks lost to perennial power Oregon in a regional final game.

Coach’s resume: Robert Murphy was set for year one in 2020 before the COVID-19 pandemic canceled the season. Murphy technically enters his second season in 2021.

Top returners: Alexa Dahnert earned a spot on the Badger South’s second team as a sophomore.

Dahnert proved to be a consistent scoring force for the Blackhawks in the 2019 season, netting a hat trick in Fort Atkinson’s regular-season finale versus Janesville Parker on May 23. She is the lone returner who made a conference team.

“We are extremely fortunate to have a solid core of ladies returning back to our program when compared to the last time they played soccer for our school,” Murphy said.

“Doing everything with a ‘we’ mentality versus a ‘me’ mindset is our greatest attribute that goes beyond the pitch and well into their adulthood.”

Departing players: The Blackhawks lose approximately 20 players from the 2019 team, according to Murphy.

Season thoughts: “Hard work will beat talent on any given day,” Murphy said.

2019 recap: The Eagles collected a 1-12-5 record and went 1-6-2 in the Rock Valley. Jefferson lost to Shorewood in regional action.

Coach’s resume: Sam El-Beri — coach of the boys team — is also ready to lead the girls this spring.

Top returners: Isabel Tackman earned a spot on the Rock Valley’s second team as a freshman utility player. Heather Fox returns in goal for the Eagles and also is capable of playing in the field, according to El-Beri. Other returners include Chelsea Hernandez, Sandra Colorado and Luisa and Jennifer Mendez.

Departing players: Anna Kallsen and Emma-El Beri were both second-team conference selections as juniors in 2019, but both have since graduated.

Season thoughts: “We are hoping to see more kids participate so we can build from that,” El-Beri said. “We have a young team this year. Numbers are down like every school. We are hoping to win few games and to keep it fun and competitive for the girls.”

2019 recap: The Whippets finished 7-11-2 and lost a regional game to New Berlin West. The Whippets went 4-6 in the Rock Valley Conference standings.

Coach’s resume: Maddy Blain will be in her first season with Whitewater in 2021.

Top returners: Cora Linos — the setter on the regional-winning Whitewater volleyball team this season — returns as a strong goalkeeper for the Whippets. Linos — a Rock Valley honorable mention as a sophomore — is the lone returning conference selection.

Departing players: Meikayla Korf was named to the Rock Valley’s first team in 2019. Siera Brunner was selected as an honorable mention. Both graduated following the 2019 season.

Season thoughts: “I am looking forward to a fast-paced, competitive season with strength from both returning and younger players,” Blain said.

2019 recap: The L-Cats captured a regional championship and finished second in the Capitol North standings. The 2019 season saw Lake Mills finish 11-3-5 overall, with the year ending in a sectional semifinal to Kettle Moraine Lutheran.

Coach’s resume: Jeff Hegstrom will be in his eighth season with L-Cat soccer, two as an assistant and six as the head coach. Hegstrom holds a 63-38-16 record going into the 2021 season.

Top returners: The L-Cats bring back three all-conference players from the 2019 season, including University of Wisconsin soccer commit Ava Stelter. As a freshman, Stelter scored 33 goals and had 10 assists in 2019.

Senior Julianna Wagner — fresh off helping the Lake Mills girls basketball team to a state title — was a second-team Capitol North selection as a sophomore. Wagner finished 2019 with two goals and seven assists.

“Controls the middle of the field very well,” Hegstrom said. “She connects with teammates extremely efficiently.”

“Incredibly athletic and an excellent defender,” Hegstrom said. “Looking to move her talents up into the midfield in 2021.”

Lake Mills brings back three other starters from the 2019 season: Seniors Ava Wollin, Maddie Stewart and Hannah Lamke. Hegstrom described Wollin as a player with great anticipation and footwork, and Stewart and Lamke as strong defenders.

Departing players: Lake Mills loses a total of eight players from the 2019 and 2020 rosters.

Season thoughts: “We are extremely excited and grateful to have the opportunity to continue the success of the Lake Mills girls soccer program this season,” Hegstrom said. “The loss of the 2020 season really put things into perspective and we are beyond excited and motivated to put the work in towards achieving our goals this season.”

2019 recap: The Warriors were unable to get into the win column, going 0-11-3. Lakeside Lutheran lost to Winnebago Lutheran Academy, 3-2, in a regional game in one of the team’s best performances of the year.

“I feel that we ended on such a positive note,” Lakeside head coach Hannah Uher said. “You could clearly see the growth and hard work that the team had put in.”

Coach’s resume: Uher will look to improve on her first season with the Warriors in 2021.

Top returners: Lakeside brings back three key seniors in Haylee Meske, Kendra Wilson and Mia Murray. Uher described Meseke as resilient, tenacious and one who leads by example, while she called Wilson organized and ready to score.

Murray is quick and aggressive toward the goal, according to Uher.

Departing players: Since the 2019 season, Lakeside has lost 13 varsity players. The Warriors do however bring back four starters from the 2019 team.

“We have some great new additions to the program in our freshman and sophomore classes,” Uher said.

Among those is sophomore Averia Wolfram, who Uher called hungry for goals and eager to see her team succeed.

“We have a significant gap left in our defense after losing so many seniors the last couple of years,” Uher said. “We’re hoping Olivia Ibeling (freshman), Sydney Nommensen (senior), and others may help fill the vacant spaces.”

Season thoughts: “We are thrilled to be back this season, anticipating the chance to compete,” Uher said. “We’re ready to move our soccer program to the next level with lots of young talent ready to blossom into a successful team. We’re especially excited to use our God-given talents as a complete unit.”

“This game was the highlight of our season and all that we had been working up to,” first-year head coach Drew Larsen said. “We still get chills when we think about it. I hope to start our season off with the same energy and momentum that we had that game.”

Coach’s resume: Larsen spent two seasons coaching as an assistant before taking over the program this year.

“Her aggressiveness and agility is definitely something that I am excited to see more of this season,” Larsen said.

Bre Ezzell is a returner who brings endurance, strength and versatility, according to Larsen. Sabrina Rodriguez and Mia Pollasky are set to be senior leaders for United.

“The CDU soccer program is growing immensely and this year we will be having a JV team,” Larsen said. “With having a lot of girls playing this year, we have a lot of talent in our program. All of our returning players have grown and improved since we last saw them play in 2019.”

Departing players: Cambridge/Deerfield has lost eight players since the 2019 season.

“I expect to see players such as Cece Buckland and Aevri Ciha step up to replace the productivity of the players we have graduated the last two years,” Larsen said. “They were freshmen in 2019 with immense potential and strength and their growth has exceeded all of my expectations since then; they will definitely be players to look out for. From returning players like Olivia Slovacek to new players such as Aly Farrar, we have many girls who are stepping up to the plate to be key players this year.”

Season thoughts: “After a rough and unexpected 2020, I am both eager and proud to coach these girls in the beautiful game again,” Larsen said. “There is a lot of returning and new talent in our program this year; I could talk for days about the amazing attributes of each player in our program and I am excited to see them each prosper.”

2019 recap: The Panthers collected a 1-12-2 record last season and finished 1-8-1 in the Rock Valley Conference. Palmyra-Eagle ended its season to Racine St. Catherine’s in a regional contest.

Coach’s resume: Chris Clopper is slated as the Panthers head coach for 2021.

Top returners: Logan Fritsch earned second-team conference honors as a freshman defender in 2019. Fritsch is the lone returner who made a conference team.

Departing players: Mikayla Peardon and Monica Curtin were both honorable-mention selections as seniors during the 2019 season for the Panthers.