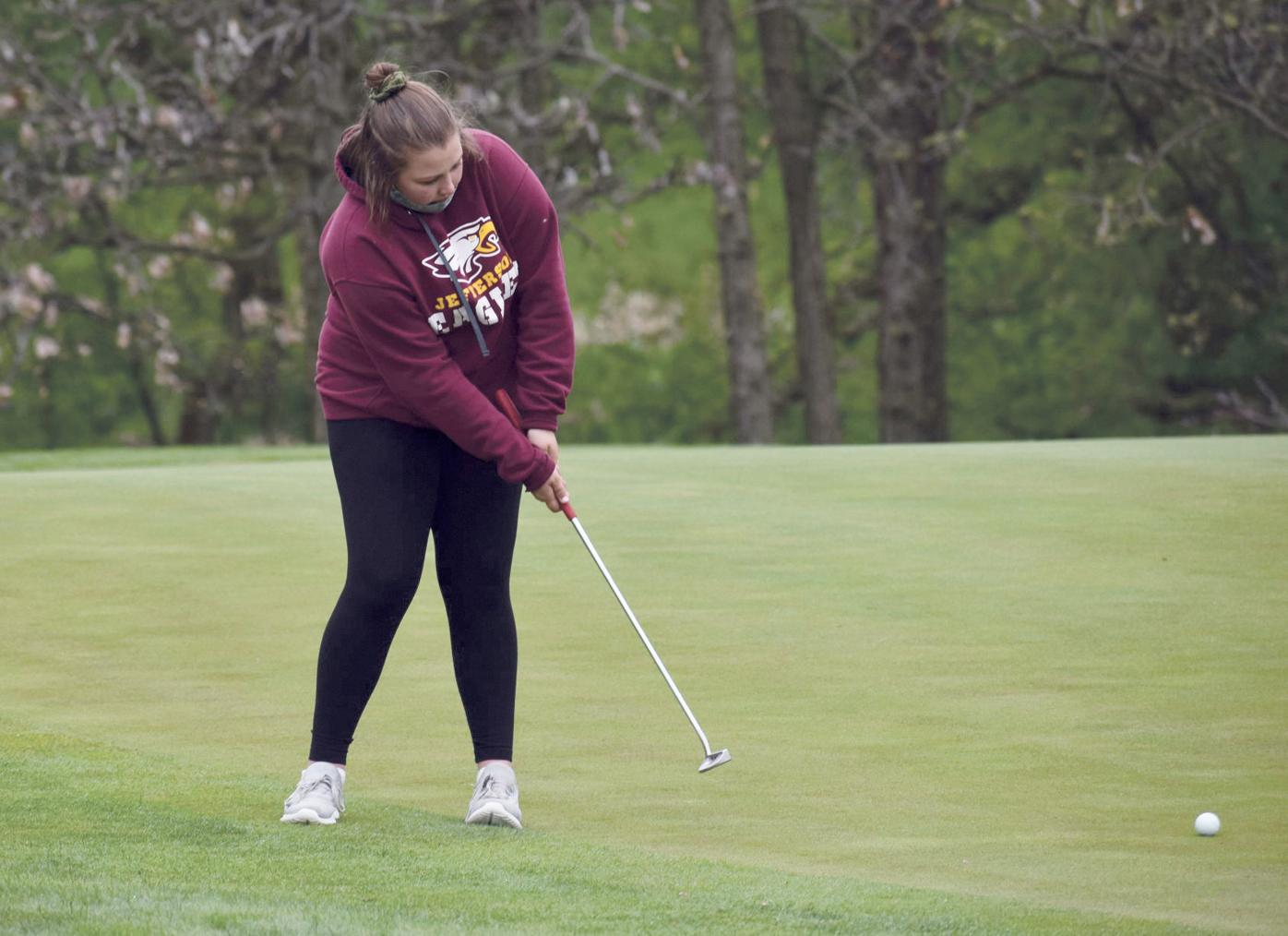 Jefferson senior Courtney Draeger putts on the first hole of a WIAA regional Tuesday morning at The Oaks Golf Course in Cottage Grove. 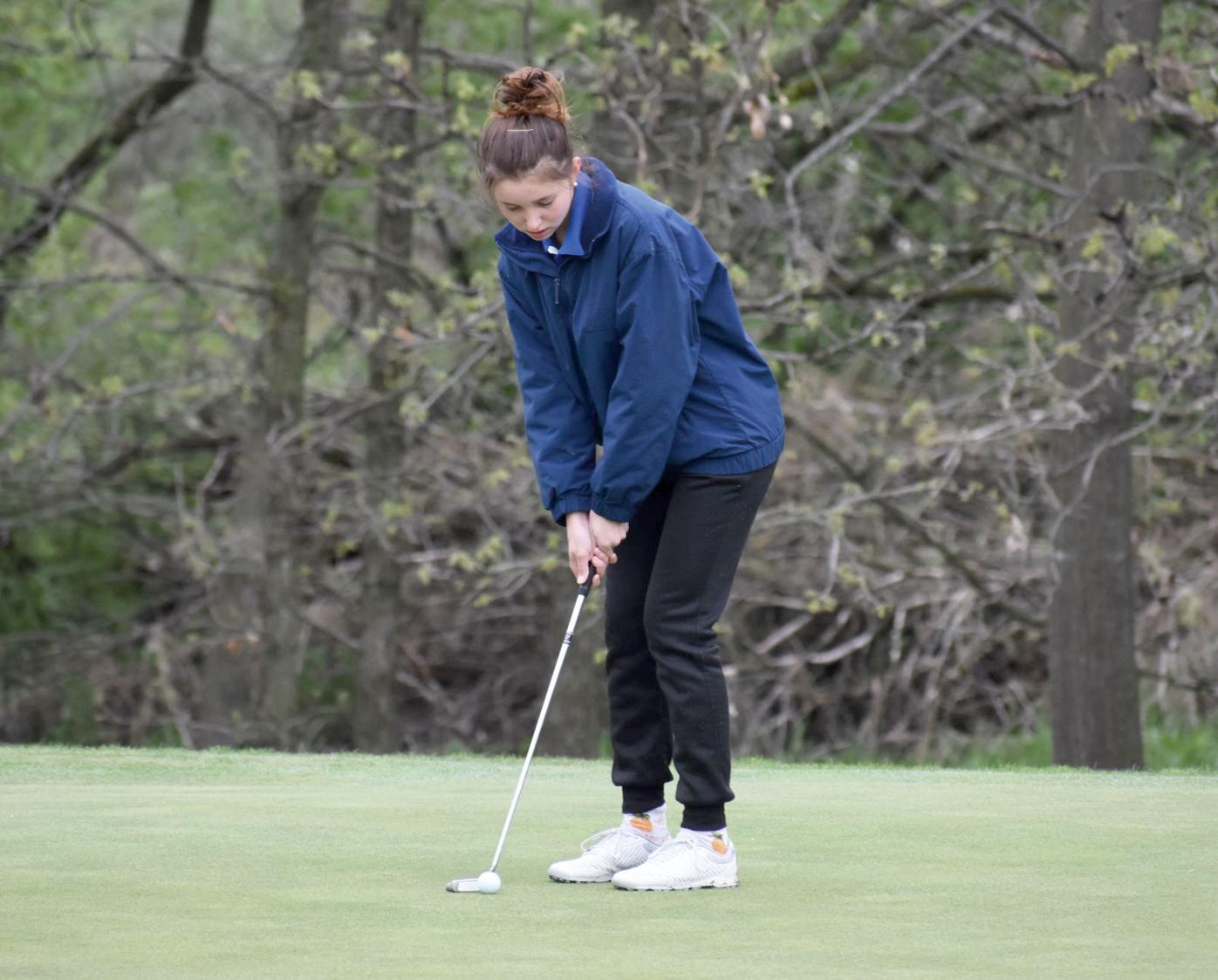 Cambridge’s Lissy Pero putts on the first hole of a WIAA regional Tuesday morning at The Oaks Golf Course in Cottage Grove.

Jefferson senior Courtney Draeger putts on the first hole of a WIAA regional Tuesday morning at The Oaks Golf Course in Cottage Grove.

Cambridge’s Lissy Pero putts on the first hole of a WIAA regional Tuesday morning at The Oaks Golf Course in Cottage Grove.

COTTAGE GROVE — It was survive and advance for the Jefferson girls golf team at a WIAA Division 1 regional Tuesday at The Oaks Golf Course in Cottage Grove.

The host Eagles were the runner-ups at the regional, collecting 380 strokes. Middleton finished first with 315 strokes. Madison Memorial (387) and Madison West (399) both advanced to sectionals with third and fourth place finishes, respectively.

Cambridge came in seventh with a total score of 518.

“Survive and advance was the theme today and weather wasn’t ideal,” Jefferson head coach Jeff Schmidt said. “Super proud of the girls for advancing out of a D1 regional, that’s not an easy task for a school our size.”

Jefferson was led by senior Courtney Draeger’s 82, which tied her for fifth overall in the 40-player field. Draeger shot a 43 on the front nine and a 39 on the back.

Just a stroke behind was freshman teammate Payton Schmidt with an 83. It was a 42 on the front and a 41 on the back for Schmidt.

“Courtney and Payton led the charge today with 82 and 83,” Schmidt said. “They both left a few shots out there but still had solid rounds.”

Middleton’s Ellie Frisch finished first in the regional with a card of 72.

Jefferson’s Val Schamens fired a 105, good forth 15th overall. Claire Beck rounded out the Eagle lineup with a 110. Ainsley Howard shot a 113.

“Claire and Val each chipped in good rounds that we needed for the second place finish,” Schmidt said. “Looking forward to getting a few practices in this week to work on a few swing mechanics before sectionals on Monday.”

The Blue Jays’ top score came from Kat Toepfer’s 114. Lissy Pero carded a 120 for Cambridge. The team score was capped off with Bella Hollis’ 141 and Amerie Timler’s 143.

Lakeside Lutheran finished third as a team with a four-person tally of 185, finishing behind first-place Lodi (171) and second-place Cambridge (175).

The Warriors’ Brandon Kreutz shot a six-over-par round of 42, tying for fourth individually. Bear Deavers (47), Will Meland (47) and Cooper Jensen (49) also scored.

For Lake Mills, which finished seventh with a 242, Lucas Kleinfeldt shot 55 and Henry Ruedebusch carded a 57.

The Blue Devils’ Hailey Thoney was the medalist with a 39. Cambridge’s Stone Farruggio also shot 42 and Nick Buckman recorded a 43 to tie for sixth.

Dane Hillmer scored a 48 for the Whippets, while Camden Frye fired a 51. David Cushman rounded out the Whitewater team score with a 57.

Austin Steies and Alek Kuykendahl both shot 59s for the Eagles.