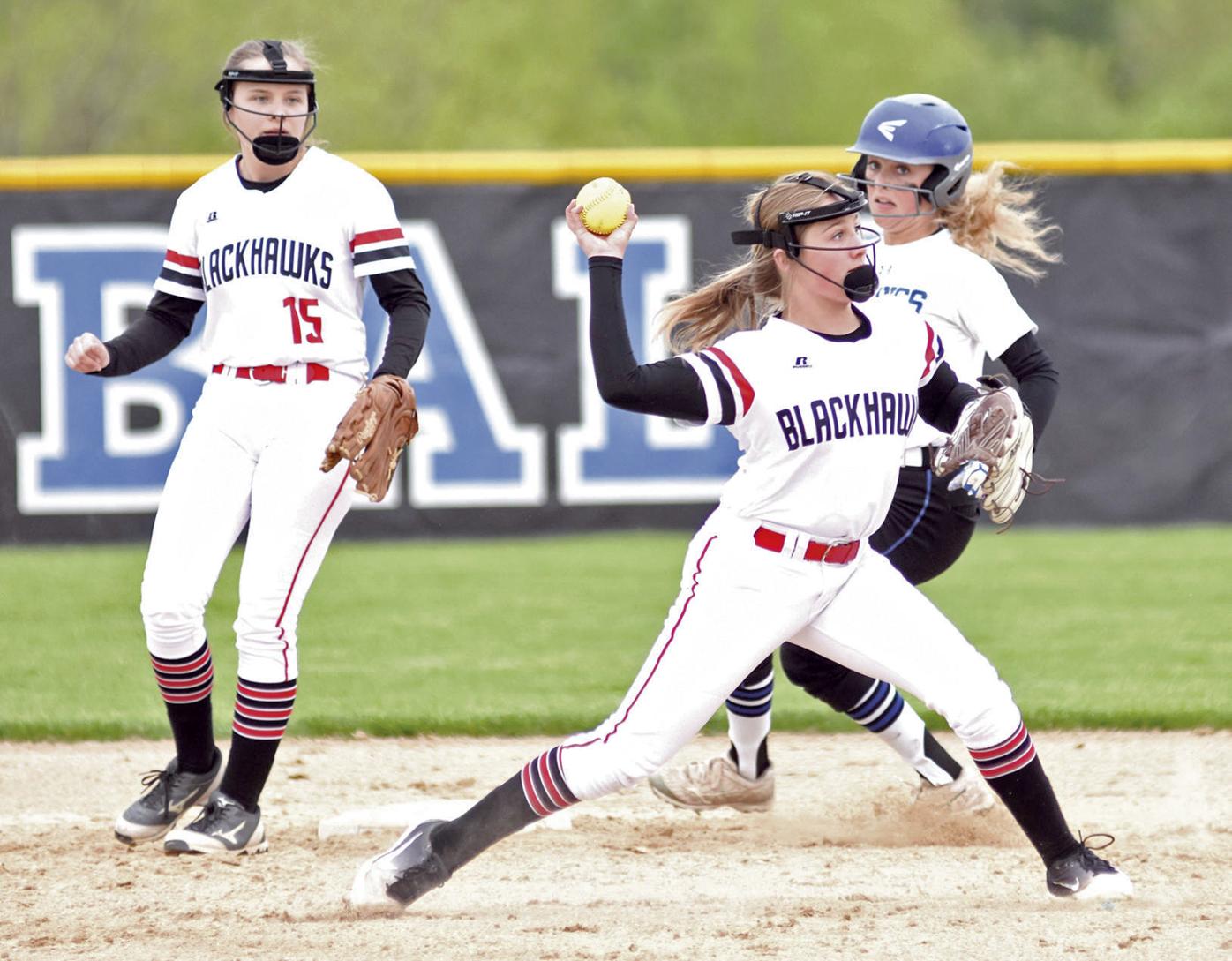 Fort Atkinson’s Brynn Torrenga throws to first in time to retire the side during the third inning of a Badger South softball game at Watertown in 2019. 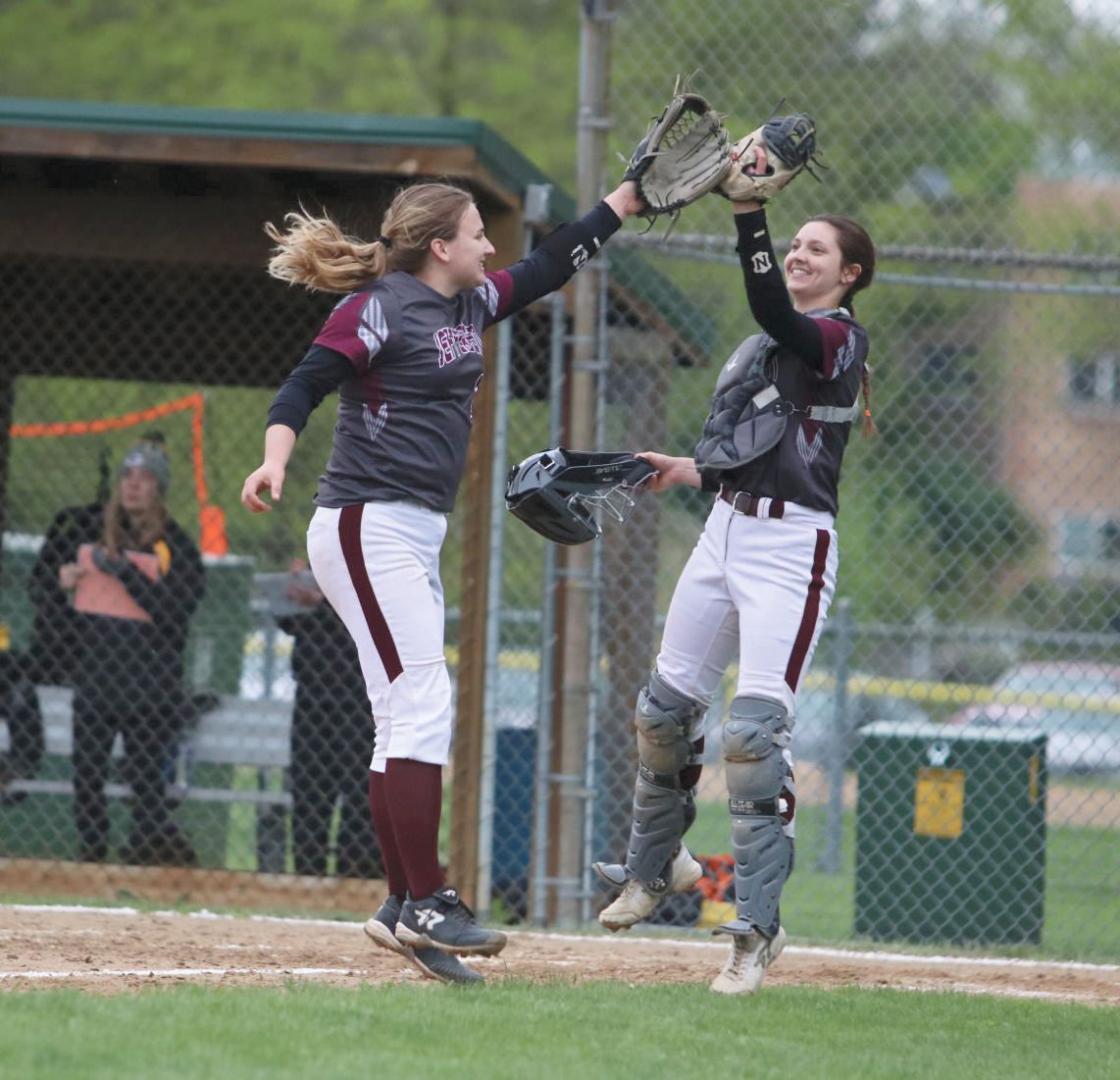 Jefferson’s Claire Beck (left) and Aidyn Messmann celebrate getting out of a fifth-inning jam against East Troy during a 2019 Rock Valley Conference game. 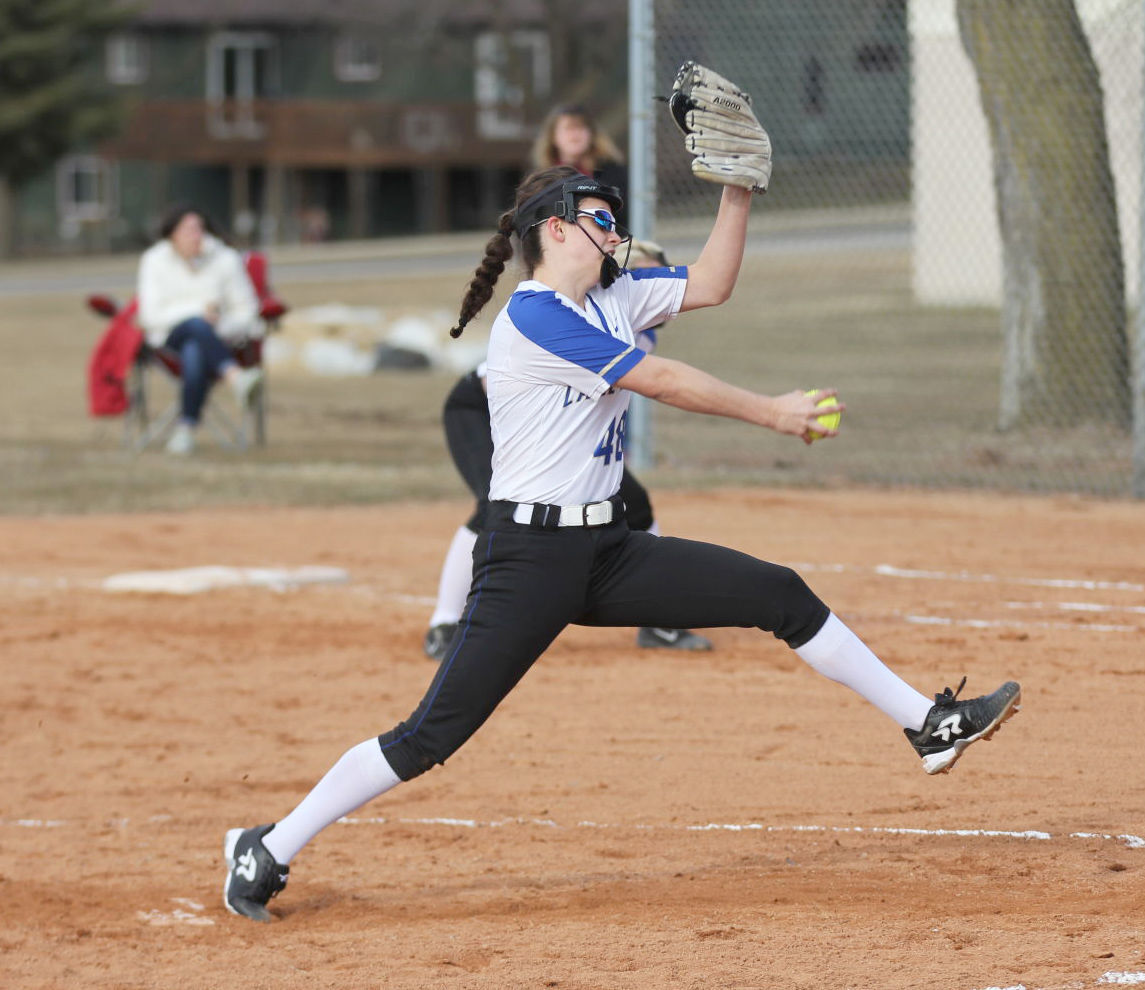 Lake Mills’ Taylor Roughen readies to fire a pitch for the L-Cats during a nonconference game against Deerfield in the 2019 season. 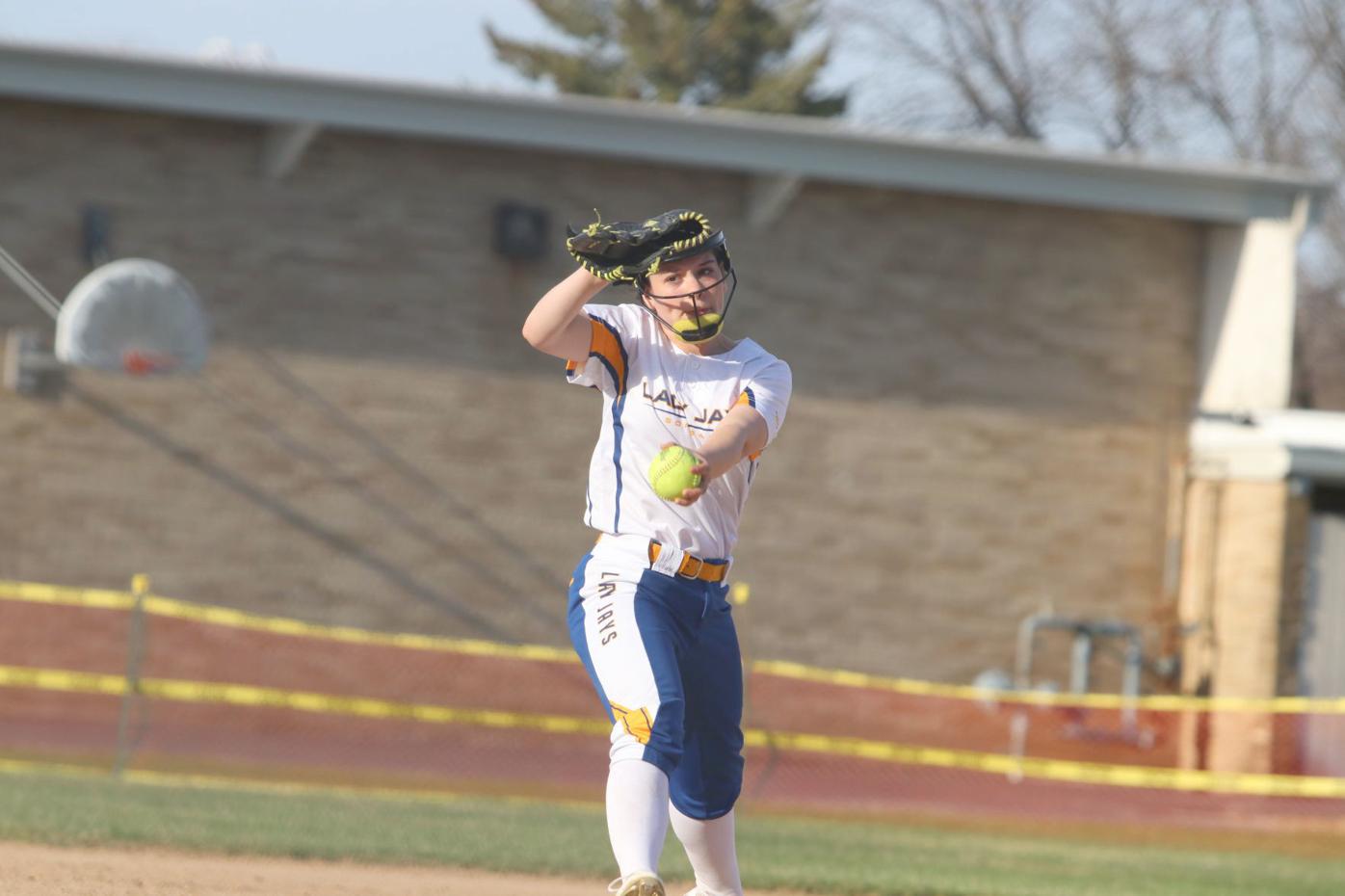 Johnson Creek’s Bella Herman pitches during her freshman season in a nonconference game in 2018.

Fort Atkinson’s Brynn Torrenga throws to first in time to retire the side during the third inning of a Badger South softball game at Watertown in 2019.

Jefferson’s Claire Beck (left) and Aidyn Messmann celebrate getting out of a fifth-inning jam against East Troy during a 2019 Rock Valley Conference game.

Lake Mills’ Taylor Roughen readies to fire a pitch for the L-Cats during a nonconference game against Deerfield in the 2019 season.

Johnson Creek’s Bella Herman pitches during her freshman season in a nonconference game in 2018.

2019 recap: The Jefferson softball team went 23-4 and won the Rock Valley Conference title with a 17-1 record. Jefferson was defeated by Monroe — the eventual Division 2 state runner-ups — in a regional final to end its season.

Coach’s resume: Mark Peterson will be in his third season with the Eagle softball team.

“Eden is a utility player, dedicated and a strong athlete who hits for power and plays a solid third base as well as catches,” Peterson said.

Junior Aidyn Messmann was a first-team RVC selection in 2019, as well as an honorable-mention all-state selection. Messmann — a catcher and shortstop — collected 49 hits her freshman year and batted for a .516 average with six home runs.

Senior Claire Beck joined Messmann on the conference’s first team in 2019. Beck pitched to an 18-3 record on the mound, racking up 112 strikeouts while hitting six home runs.

As a freshman, Savannah Serdynski was an honorable-mention selection in the Rock Valley. The now junior, who played outfielder and shortstop, batted .364 in 2019.

Senior Brittney Mengel is a two-year letter winner for Jefferson, while junior Julia Ball comes into 2021 after pitching a 2-0 record in 2019.

“All six of these players have a passion for softball and play year-round,” Peterson said. “They were also integral parts of our conference title in 2019.”

Departing players: Despite some key returners, Jefferson does lose Kylee Lukes and Claire Peachey from the 2019 team. Lukes was first-team all-state in 2019, while Peachey was a first-team RVC selection.

“We have a solid group of players who will need to step up and fill in some spots,” Peterson said. “We are looking forward to players stepping up and taking on more of a leadership role this season.”

Season thoughts: “Just very excited for the players to get back on the diamond and compete,” Peterson said. “We have a very dedicated and talented group of ladies who have put in a tremendous amount of hard work with the game of softball. Looking forward to seeing how this team comes together and competes after the year off. I feel we can compete for another conference title but it is difficult to know how we stack up against other conference teams since we had the year off.”

2019 recap: Fort Atkinson went 7-15 overall and 6-8 in the Badger South last season. The Blackhawks’ season ended in regionals against Wilmot — who eventually advanced to the state tournament.

“We had the potential to be much better than our win/loss record indicates,” Fort Atkinson head coach Brian Bosch said. “We were just never consistent enough to do so.”

Coach’s resume: Bosch enters his fourth season as head coach with a 23-21 record.

Top returners: Alex Theriault made the Badger South’s second team as a freshman in 2019. Theriault, a center fielder for Fort Atkinson, scored 30 runs for the Blackhawks last season. Of her 28 hits, 26 were singles.

“Alex handles the bat very well, can slap or hit,” Bosch said. “She’s very fast on the bases and in center field.”

“Brynn has an extremely positive attitude and is a hard worker,” Bosch said. “She is a great competitor who wants to get better every day. Makes consistent contact at the plate and is very steady in the field.”

Torrenga is slated to play pitcher and shortstop.

Other notable returners include Kiarra Kostroski, Angela Unate and Christa Sebranek. Kostroski and Unate have been starters since their freshmen seasons. Kostroski is a player Bosch said can play all nine positions.

Bosch called Sebranek an ultimate-team player who is concerned more with the team over herself.

“The mantra is next girl up, and we are expecting big things from a deep roster with lots of talent coming from kids in grades 9-12,” Bosch said.

Season thoughts: “We are so excited to finally be getting this opportunity,” Bosch said.

“It’s been almost two years since we have competed as a program for our school and our community. As a coaching staff and as a program, we can’t wait to get started on April 19.”

2019 recap: The 16-7 Whippets finished their season at a regional final after beating Waukesha Catholic Memorial in a regional semifinal. Whitewater tied for second in the Rock Valley Conference with a 14-4 record.

Coach’s resume: Ron Sdano holds a 46-68 record as he comes into his seventh season coaching the Whippets.

“Kiyla is a good defensive first baseman,” Sdano said. “She is a good hitter especially when it comes to driving in runs. Kiyla is a quiet leader who leads by example.”

Lexi Juoni looks to give Whitewater some stability behind the plate.

“This is Lexi’s third year as our starting catcher,” Sdano said. “Lexi is very good defensively with a strong arm. Lexi is strong and can hit for power. She is a good leader who loves the game.”

“We have a lot of young players who will be fighting for openings on the varsity roster,” Sdano said.

Season thoughts: “We are excited for the opportunity to get back on the playing field,” Sdano said. “The Rock Valley Conference will be very strong once again with Jefferson being the team to beat.”

Top returners: Taylor Roughen — who helped the Lake Mills girls basketball team to a state title in the winter — comes into her senior season as a two-time first team conference pitcher.

Ellie Evenson is a two-time all-conference selection and is a player Clift called a hard worker and someone who leads by example.

Syd Schwartz and Tessa Kottwitz join Roughen and Evenson as team captains this season. Kottwitz was an all-conference honorable mention in 2019.

“Syd Schwartz will replace Brianna Jessie at third,” Clift said. “Belle Topel will replace her sister Lexy Topel at shortstop. Emma Topel and Taylor Wollin will split time at catcher, and Ava Belling will replace Desinee Anderson in the outfield.”

Season thoughts: “We have high expectations for a successful season and postseason,” Clift said. “We have a nice combination of work ethic, athleticism and experience and overall excellent team chemistry. Our player leaders are both positive and experienced. We have a difficult schedule in a good conference, but we look forward to the challenge.”

2019 recap: The Warriors finished 12-9, ending their season with a regional loss to Lake Mills. Lakeside placed third in the Capitol North with a 6-4 record.

Top returners: Senior Kylee Gnabasik has been a starter since her freshman year and was named to the conference’s first team in 2019.

“She is consistent and a great leader,” Doering said. “She throws strikes and fields her position very well as a pitcher. She will likely be a top-of-the-order hitter and is solid in the short game and base running as well.”

Junior Nora Statz started as an outfielder as a freshman in 2019 for Lakeside, but will likely move to an infield position, according to Doering.

“Nora has great pop as a hitter and the strongest arm on our team,” Doering said. “She will be a heart-of-the-order hitter for us.”

Like Gnabasik, senior Olyvia Uecker has been a starter since her freshman season.

“She has a strong arm and may be our best baserunner,” Doering said. “She may stay as our third baseman but might also move to catcher or centerfield.”

Departing players: Lakeside graduated three players from the 2019 team and four more from the 2020 squad. The Warriors also lost senior Olivia Krieser — a first-team Capitol North selection in 2019 — to an offseason injury.

“The biggest holes will be at second, center field and catcher,” Doering said. “We hope that some of our younger players can fill in but we may consider moving some of our other players to fill those holes.”

Season thoughts: “We hope to compete with the top of our conference,” Doering said. “If we have a solid conference season we will be in a good position to make a run in the playoffs. One of the biggest challenges will be to get our team to come together while bringing in a large number of players that are new to the varsity level.”

2019 recap: The Blue Jays tied for third in the Capitol South standings with a 5-5 record. Cambridge finished 7-11 overall and lost to Parkview in a regional game to end its season.

Coach’s resume: Dean Freeland will once again be leading the Blue Jays this season.

Top returners: Junior Emma Nottestad was named to the conference’s second team as a pitcher/hitter freshman in 2019.

Juniors Mayah Holzhueter and Audrianne Kieler both earned the Blue Jays’ Most Improved Player Award at the end of the 2019 season.

Departing players: Cambridge had two Capitol South first-team members in 2019 in Cieara Peters and Ashlynn Jarlsberg. Both were set for senior years in 2020 before the season was canceled. Mary Hommen — a second-team selection — also missed her senior year in 2020.

2019 recap: The Panthers finished 4-8 overall and 2-6 in the Trailways South. Palmyra-Eagle’s season ended with a regional game against Brodhead.

Coach’s resume: Bill Lean will be coaching the Panthers for the first time in 2021.

Top returners: Ally Fredrick looks to be the go-to ace on the mound for PE this season, while Madyson and Molly Nettesheim also figure to be sound contributors.

“All three girls work very hard on their sport,” Lean said. “As a first-year coach, they have made the transition easy for me.”

Season thoughts: “This season will be a learning experience for the entire team,” Lean said. “We will be a work in progress that plans to be playing our best ball come tourney time.”

2019 recap: Johnson Creek fell to Horicon two games away from state in the sectional semifinals, finishing with a 21-4 record. The Bluejays were the winners of the Trailways South with a 7-1 record.

As a freshman, Alexis Swanson earned a second-team conference nod. Swanson recorded 30 hits on the season and was second on the team in doubles with nine. The now junior also batted in 19 runs and hit one homer in 2019.

Departing players: Among Johnson Creek’s biggest losses is Jordyn Pipkin — who was named the Trailways South Player of the Year in 2019. Rylie Thomas and Brooke Joseph joined Pipkin as first-team selections in 2019 who have since graduated.