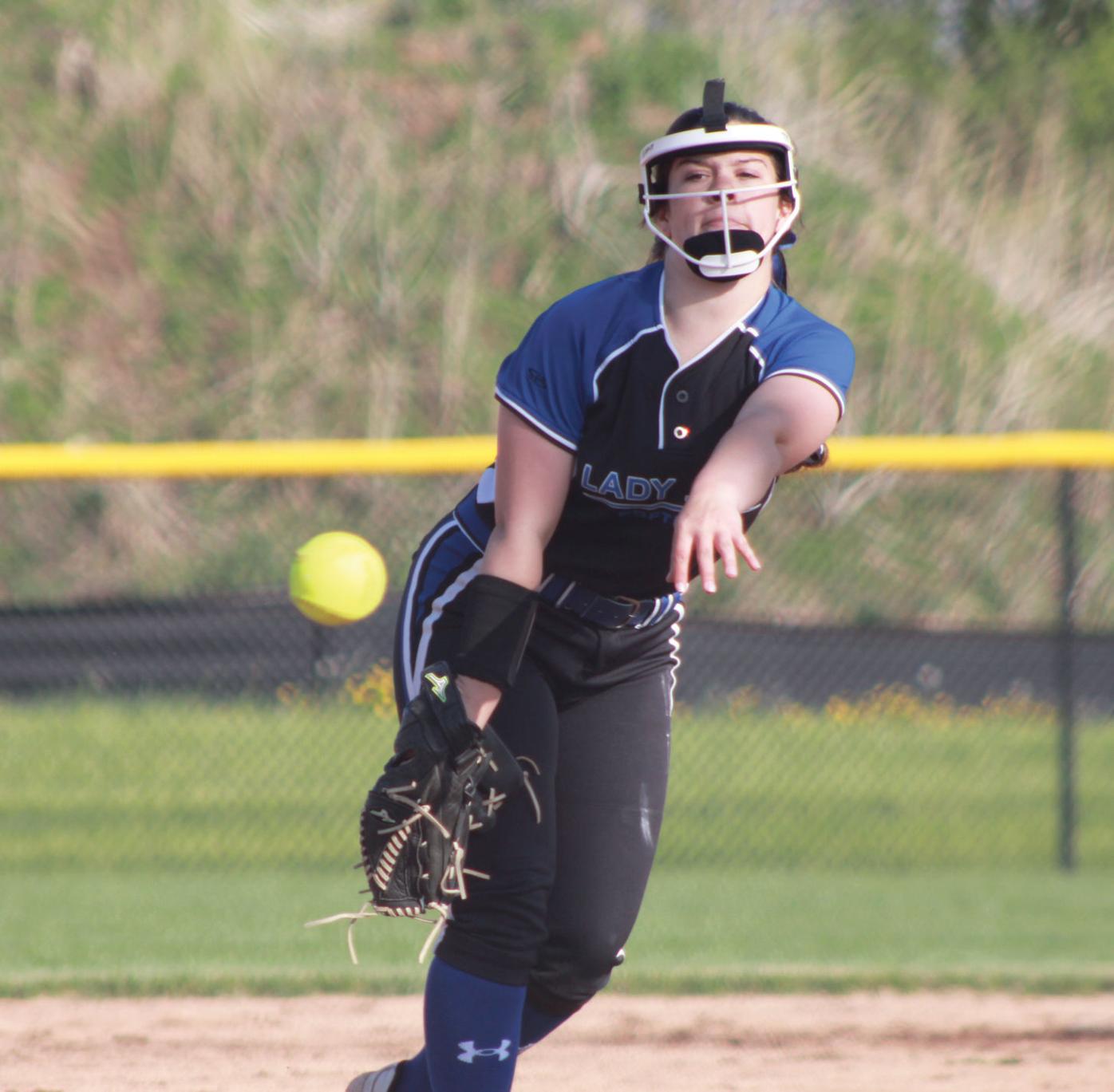 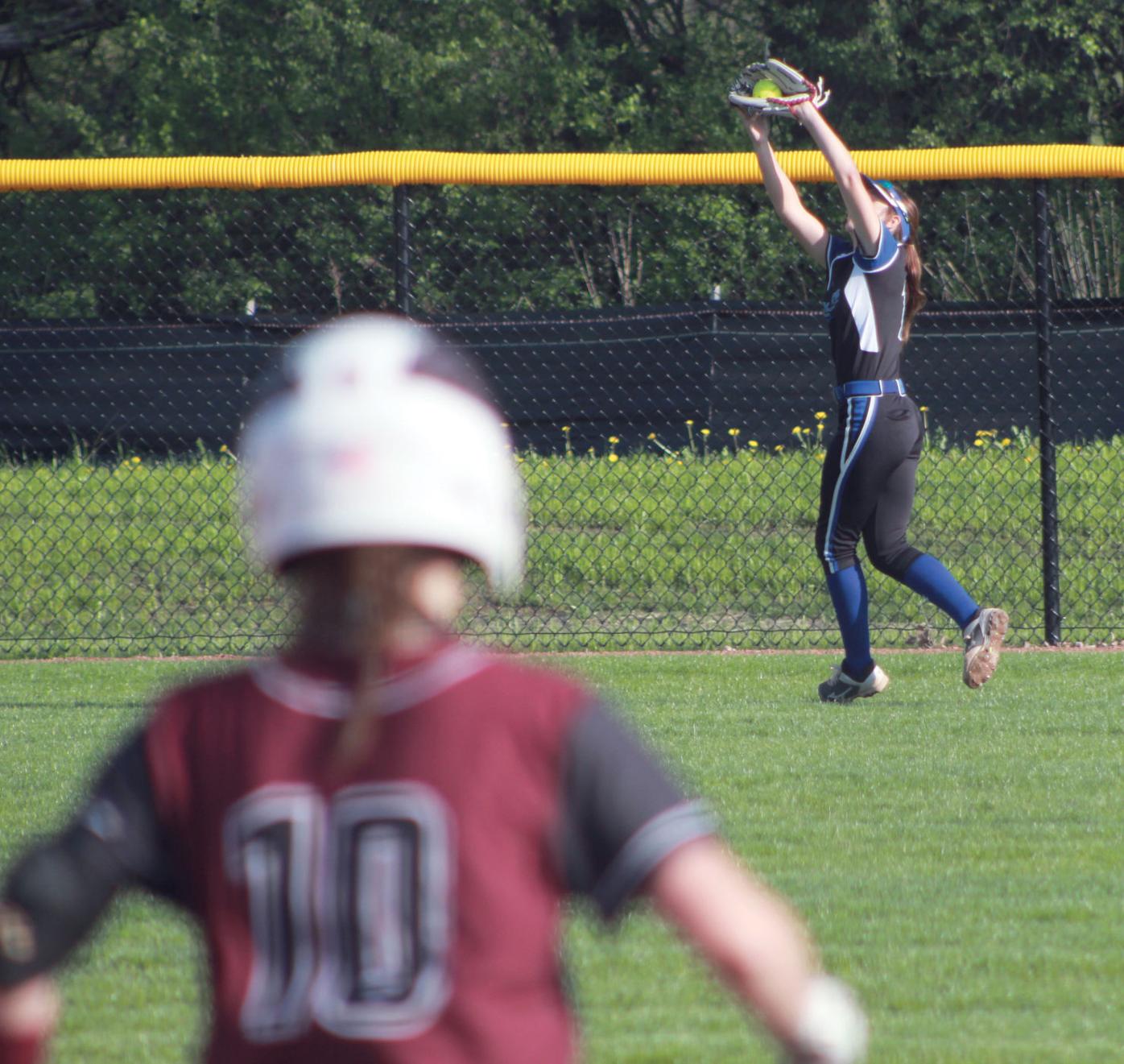 Serdynski and Mengel both collected two hits and drove in three runs to lead the Jefferson offense.

Julia Ball got the win in the circle for the Eagles, pitching all six innings of the shortened game while allowing four hits and striking out three.

The Eagle offense scored eight combined runs the first three innings and put things out of reach after a five-run sixth.

Eden Dempsey, Claire Beck and Lindsey Krause each recorded two runs to go along with a pair of hits.

“Savannah Serdynski had a great game at the plate and in the field. Overall great team effort.”

JOHNSON CREEK — Hannah Budig walked off Johnson Creek with a two-run shot to give the Bluejays a one-run Trailways South victory over visiting Deerfield on Thursday.

Down 5-4, Kaiyli Thompson started off the bottom of the seventh inning with a double. With a 1-0 count and no outs, Budig got hold of a homer to give Johnson Creek the win.

LAKE MILLS — Poynette scored a run in the seventh on an error to help keep its lengthy conference winning streak dating back to 2016 intact, defeating Lake Mills in a Capitol North clash on Thursday at Rotary Park.

L-Cat senior pitcher Taylor Roughen threw a complete-game four-hitter, striking out 15 while walking none on 87 pitches with a strike percentage of 84.

Poynette, which got seven strong innings of six-hit ball and nine strikeouts from Holly Lowenberg, scored the game’s only run with one out in the seventh after Laken Wagner bunted, reaching base via an error, allowing Brooke Steinhorst, who single to start the inning and was 2-for-3, to score.

The L-Cats, who had six hits including two apiece by Tessa Kottwitz and Belle Topel, had a golden opportunity to strike first in the fifth. Taylor Wollin doubled to center to get the inning underway before a single by Ellie Evenson and walk by Roughen loaded the bases with one out. A strikeout and a fly out then reversed the momentum, ending the inning.

Kottwitz doubled to leadoff the first and the L-Cats had runners on the corners with no outs after Evenson reached on a fielder’s choice. The next two hitters struck out before a ground out concluded the frame.

Roughen struck out the side in the first and third innings, fanning eight of the first nine hitters she faced.

Poynette improves to 5-0 overall and 4-0 in the conference standings.

The Warriors (4-1, 3-1 Capitol North) plated nine runs in the fifth inning to enact the 10-run rule, amassing 15 hits for the game including two apiece by Kylee Gnabasik and Nora Statz, who also scored twice and drove in a pair.

“We had a solid offensive performance,” Lakeside Lutheran softball coach Matthew Doering said. “The top of our lineup was locked in all night. Olyvia Uecker had a real nice 5-for-5 night. Kylee Gnabasik, Olyvia and Jenna Shadoski ran the bases and pushed the tempo every time they were on base.”

Gnabasik earned the decision, allowed three earned on 13 hits while striking out three and walking two.

“Kylee threw a solid game in the circle,” Doering said. “She scattered everything they did. Our defense made some nice plays. At least twice we cut down runners on the bases and we kept them from getting extra bases most of the night.”

Abby Meis, Gnabasik and Shadoski each had run-scoring singles as the Warriors scored six times in the third to build a 9-3 lead after three frames. RBI singles by Shadoski, Statz and Kendra Blake made it 14-3 in the fifth.

EVANSVILLE — The Blue Devils got red hot down the stretch as they scored 12 runs in the final three innings to earn a Rock Valley Conference victory over the Whippets Thursday.

Shyan Lesperance connected on three hits, scored twice and drove in a run for the Whippets. Lexi Juoni batted in three runs off two hits — with one being a home run— and scored twice.

Ashlynne Bohmann drove in a pair of runs off two hits for Whitewater.

PALMYRA — Kyler Koutsky went 3-for-3 and scored twice in the Panthers Trailways South victory over Williams Bay Thursday in Palmyra.

Madyson Nettesheim also touched home plate twice for the Panthers, finishing with one hit. Kyler Koutsky and Maddie Koutsky both drove in one run each in the victory.

Ally Fredrick pitched all seven innings, giving up 10 hits while striking out a pair.

CAMBRIDGE — Emma Nottestad and Saveea Freeland combined for a no-hitter in Cambridge’s Capitol South win over Belleville Thursday in Cambridge.

Freeland also had a 3-for-3 performance at the plate, which included a home run. She finished with three RBIs and three runs. Kayla Roidt collected two hits and drove in a pair of runs.