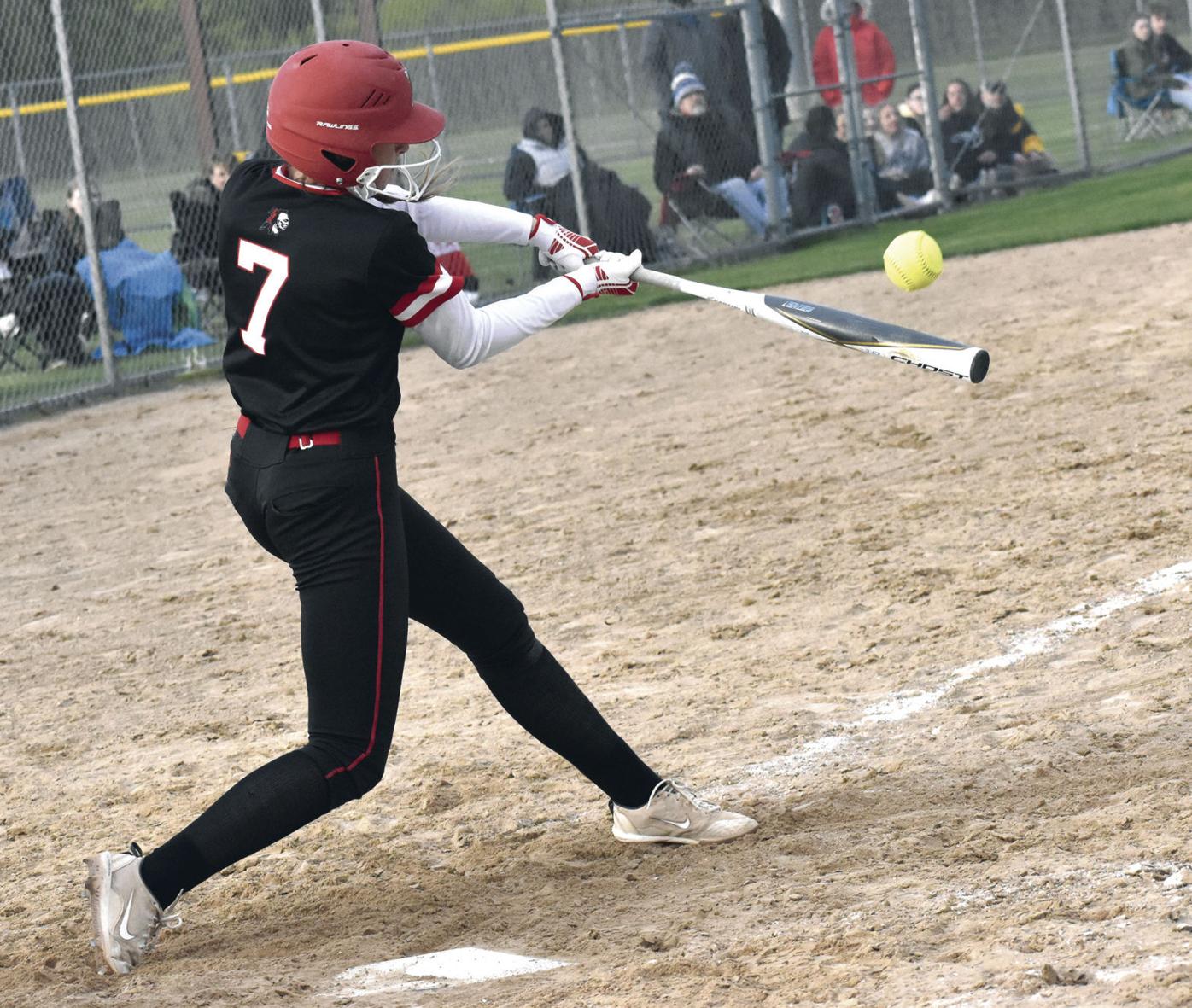 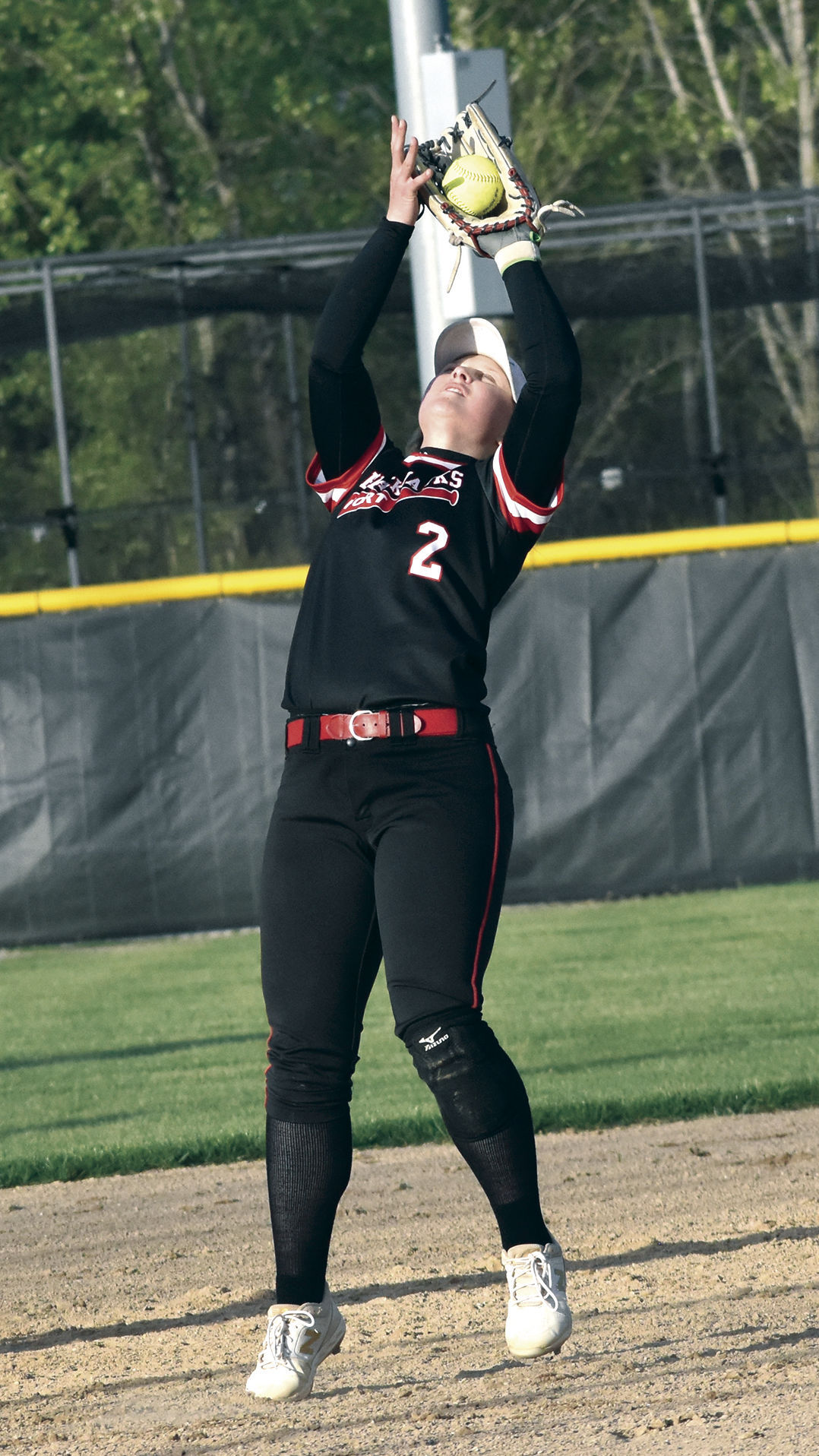 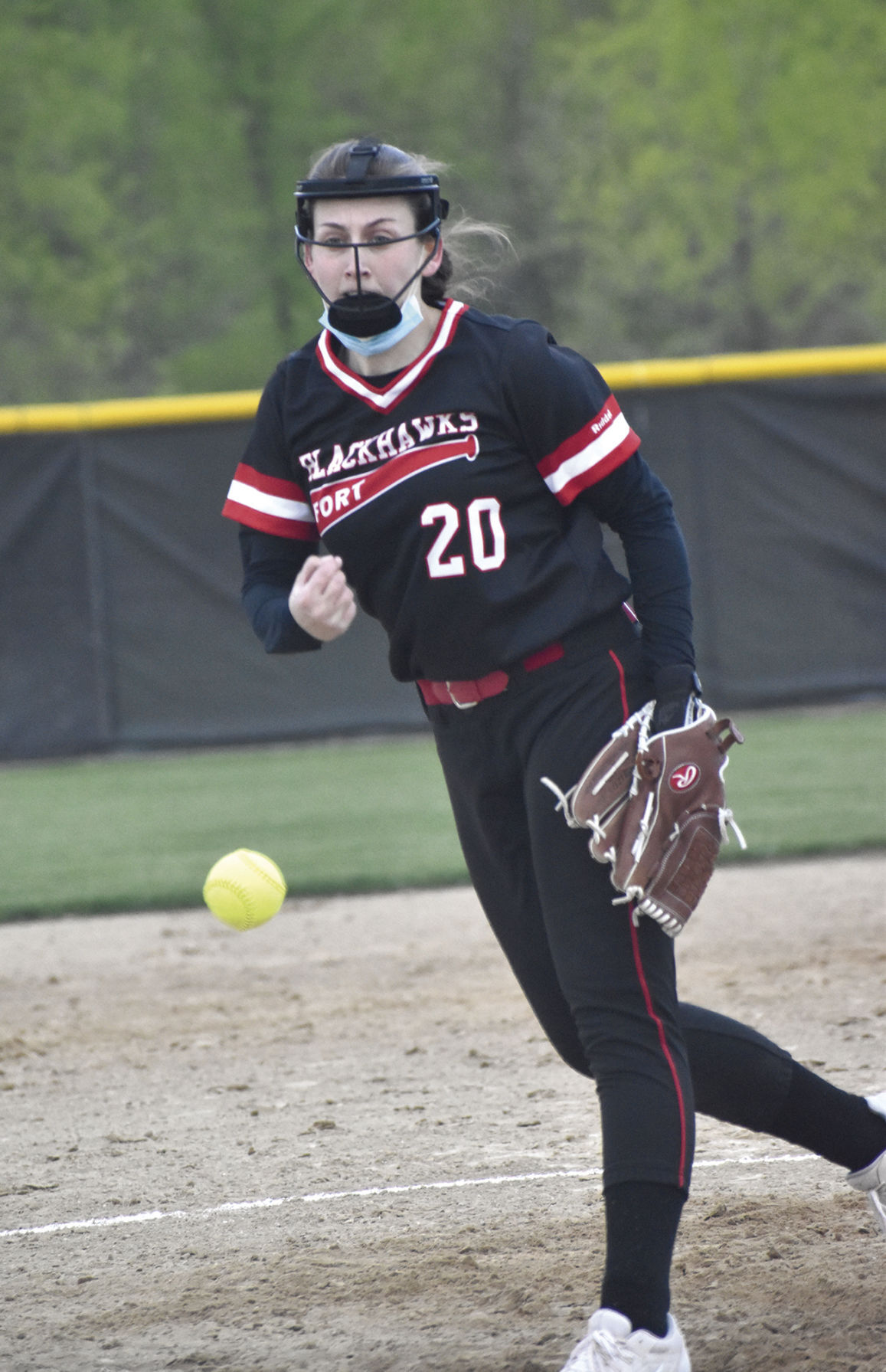 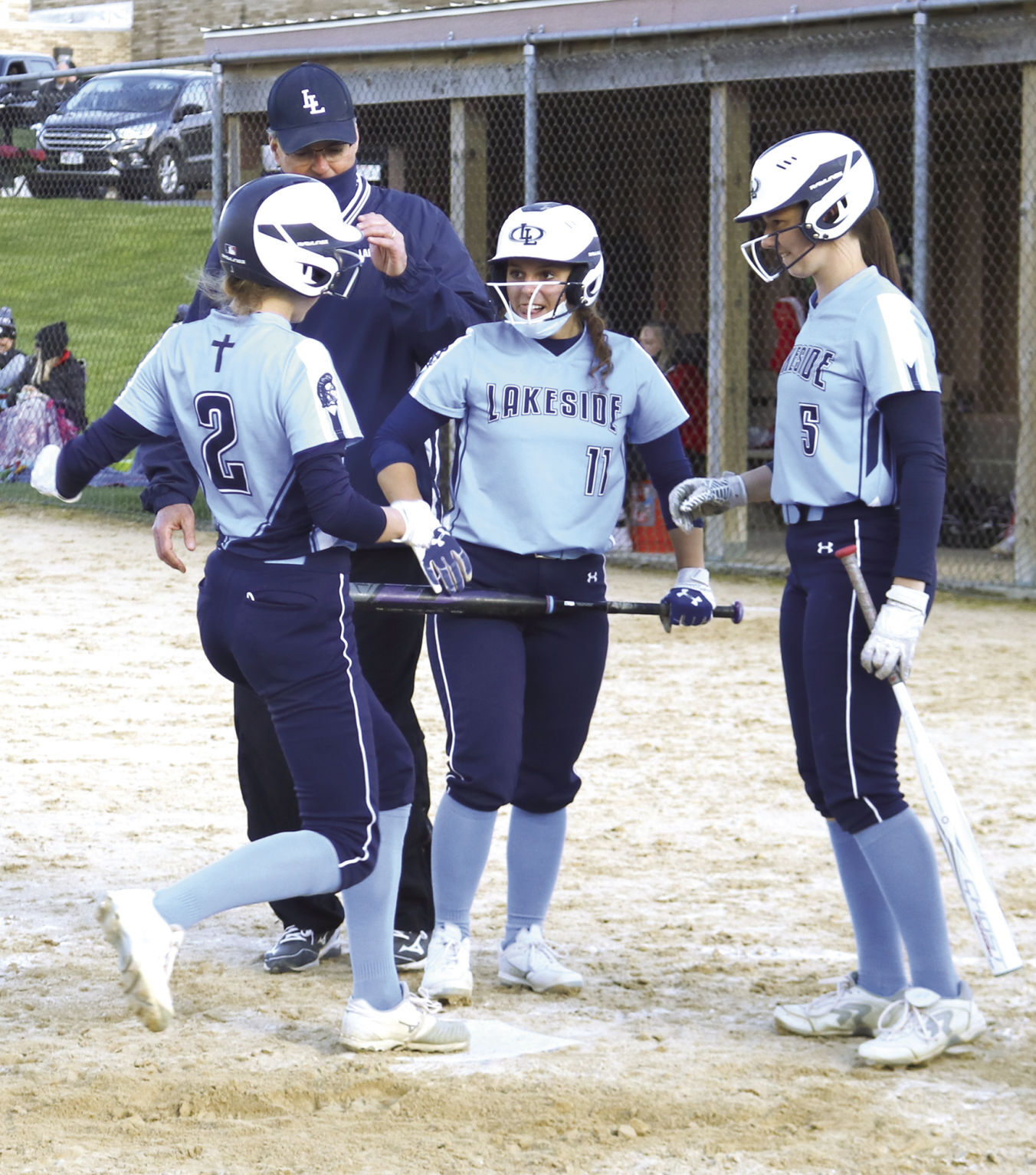 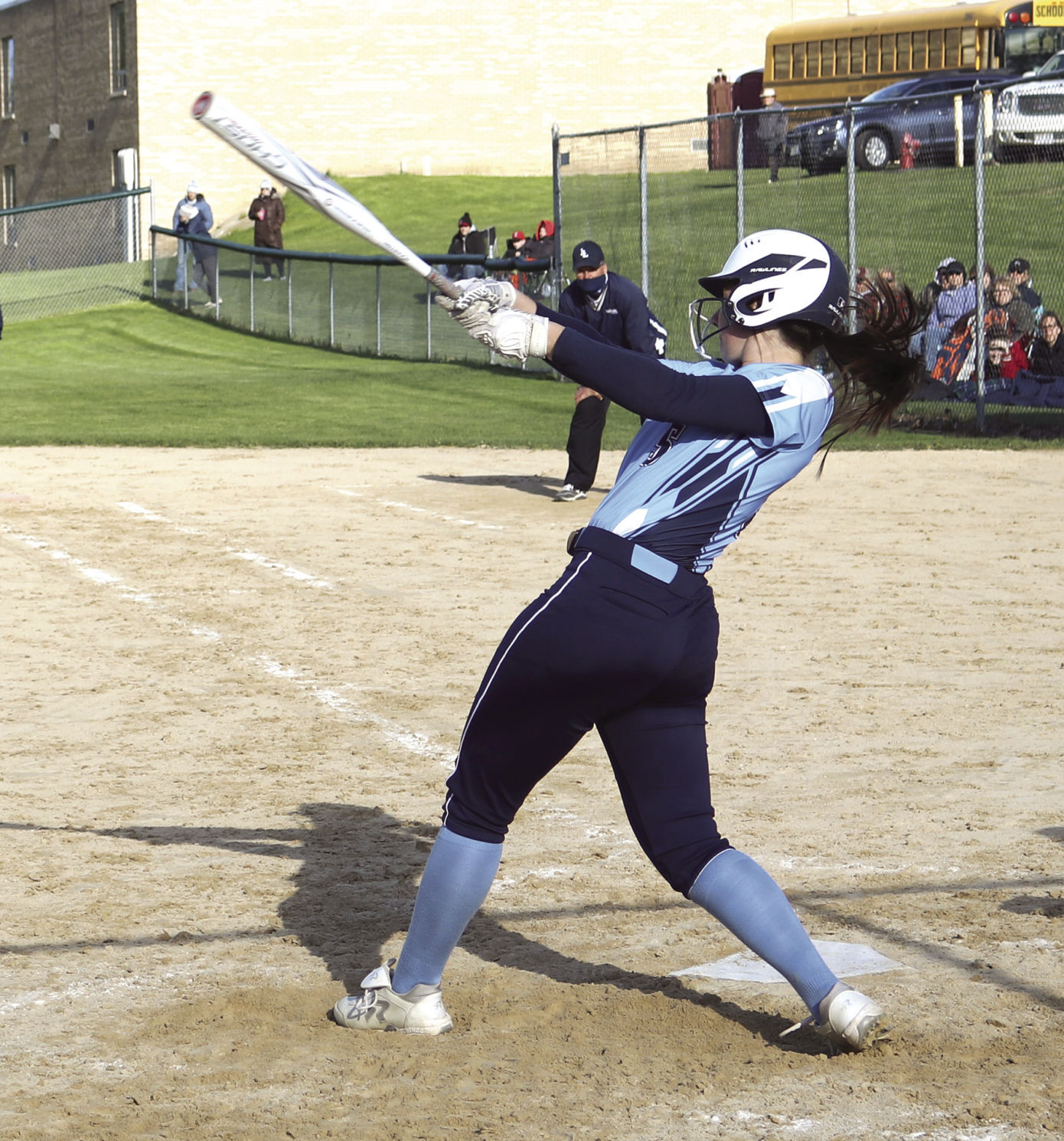 Lakeside Lutheran’s Nora Statz hits during the team’s nonconference home game against Edgerton on Friday. The Warriors won 10-0 in five innings and Statz was 3-for-3 with a grand slam in the first inning.

Lakeside Lutheran’s Nora Statz hits during the team’s nonconference home game against Edgerton on Friday. The Warriors won 10-0 in five innings and Statz was 3-for-3 with a grand slam in the first inning.

WATERTOWN — The Goslings had an off night in all facets. The Blackhawks certainly made them pay for it.

Fort Atkinson scored four times in the opening inning and never looked back in a 12-0 Badger South victory over Watertown at Brandt/Quirk Park on Friday.

Fort starter Alexis Jacobson faired much better, pitching all six innings.She gave up a lone single to sophomore Abby Walsh in the fourth while striking out one and walking another.

“Alexis Jacobson was just unreal,” Fort Atkinson head coach Brian Bosch said. “She hit her spots. To give up one hit, but only strike out one batter, she just got a whole bunch of weak contact all day long and was never really in trouble.”

The Blackhawks (4-1, 3-1 Badger South) scored four runs on three hits in the first.

“It was a situation where we’re on the road so we come up to bat right away and I think we batted around in the first inning,” Bosch said. “We hit everything hard and we jumped on them.”

Jacobson helped her own cause with a two-run single to open the scoring, plating Alex Theriault and Kiarra Kostroski. Kaitlyn Burke then scored on Deanna Pfaff fielder’s choice and Jacobson touched home on an error.

In the second, Kostroski hit the first of her three doubles, scoring Theriault, who had three singles, a walk and scored three times. Burke, who went 3-for-4 with three RBIs, had a run-scoring single next that made it 6-0.

“She is constantly striving to get better,” Bosch said. “It’s not a situation where she’s satisfied with where she’s at. That’s really neat to see.”

Brynn Torrenga had a two-hit game for Fort, which has won four in a row and is tied with Monona Grove and Oregon atop the conference standings.

“We’ve played really good softball and it’s fun to see the work the girls are putting in practice to prepare is really starting to pay off,” Bosch said. “They’re starting to see the benefits of that. That’s what we keep talking about. We’re playing well and we’re a good team, but we can be a special team if we get some more practice. Yes we’re proud of what we’ve done, but we forget about that and we keep getting better everyday.”

In game one, Eden Dempsey drove in three runs off two hits and also scored once. Savannah Serdynski and Aidyn Messmann both collected a pair of runs and hits in the victory.

Claire Beck pitched a five-hit shoutout, striking out seven in the process.

The Eagles made short work of the Trojans in game two, finishing the contest in three innings. Messmann drove in four runs off three hits and recorded a run. Serdynski scored three runs and also picked up three hits and three RBIs.

Julia Ball got the win in the circle, giving up three hits and no earned runs. She also struck out three batters.

HORICON — Lakeside Lutheran’s doubleheader against Horicon featured an extra-inning battle as well as a walk-off winner as the Warriors earned a nonconference road split on a Saturday.

Lakeside won the first game 10-7 in extra innings, but fell in the second game 5-4 after a Horicon walk-off.

In game 1, the Warriors scored four runs in the top of the seventh to help send the game to extras.

In the extra-eighth inning, it was a three-run homer from Jenna Shadoski that gave Lakeside a 10-7 advantage.

Shadoski finished with three RBIs and a pair of runs. Norta Statz scored twice off three hits and also drove in a run. Kendra Blake finished 4-for-5 and batted in two runs.

JOHNSON CREEK — The Bluejays opened up with a 7-5 victory over visiting Waterloo on Saturday, but fell 6-5 in the second game of the nonconference doubleheader.

Kaiyli Thompson homered twice in the game one victory for Johnson Creek, finishing with three runs and three hits. Isabella Herman gave up one earned run in seven innings, striking out two batters.

In game two, Thompson kept up her hot streak at the plate, finishing 3-for-4 with two doubles and a pair of RBIs. Jenna Fincutter homered in the loss.

Statz, who was 3-for-3 with five runs driven in, hit a no-out delivery over the fence in the first inning on the first pitch she saw.

“Nora Statz had a huge night at the plate,” Lakeside Lutheran softball coach Matthew Doering said. “Her grand slam in the first inning really ignited the offense. Nora is a really good hitter and showed it tonight. Our defense also was excellent all night.”

Run-scoring doubles by Statz and Alyssa Reinke and a fielder error made it 7-0 after three frames. After an RBI double by Olyvia Uecker, Shadoski greeted new Crimson Tide pitcher Katie Gunderson with a one-out blast to left that made it 10-0.

Kieghtan Rank earned the decision for the Warriors (5-1), working all five innings while surrendering just three hits and striking out six while walking one.

“Kieghtan Rank threw a three-hit shutout for the win,” Doering said. “She was in control all night and threw an efficient game. She continues to grow into a solid pitcher. She is having a great start to the season as a freshman.”

GREENDALE — The Lake Mills softball team won the first game of a nonconference doubleheader at Martin Luther on Friday 2-0 before an 8-4 loss in the finale.

Senior Taylor Roughen’s outstanding pitching continued in the opener. She tossed seven shutout innings of five-hit ball, striking out 15 while not permitting any walks and throwing a strike 88 percent of the time to earn the decision.

Roughen, who went 2-for-3, helped her own cause with a bases-loaded single to left with one out in the third to make it 1-0. After Roughen struck out the side in the bottom half of the inning, Syd Schwartz led off the fourth with a single and scored on an RBI base knock by Taylor Wollin.

Martin Luther did threaten in the seventh, loading the bases with one down after three singles. Hannah Moesch then grounded to Roughen, who threw home for a force out and a Yaleiza Rodriguez strikeout made it final.

Ellie Evenson was 2-for-3 with a double.

In the second game, Avery Chilson allowed three earned on seven hits over 4 1/3 innings and was saddled with the loss.

The Spartans scored five times on three hits in the third before Ava Hoppert and Abby Hafemann each homered in a three-run fifth.

Lake Mills leadoff hitter Tessa Kottwitz went 2-for-3 and had half the team’s hits as the L-Cats took advantage of a pair of errors to plate four runs in the fifth.

Cambridge led 1-0 heading into the top of the sixth inning before scoring seven runs the final two innings.

Jenna Fincutter pitched one inning for the Bluejays, striking out two batters.

Isabella Herman and Josey Whitehouse both picked up one hit each for Johnson Creek.

HORICON — Molly Nettesheim homered for the Panthers during a nonconference loss to Horicon on Friday.

Ally Fredrick finished with three RBIs and two hits for Palmyra-Eagle out of the leadoff spot, while Nettesheim ended with two RBIs, two hits and a run.