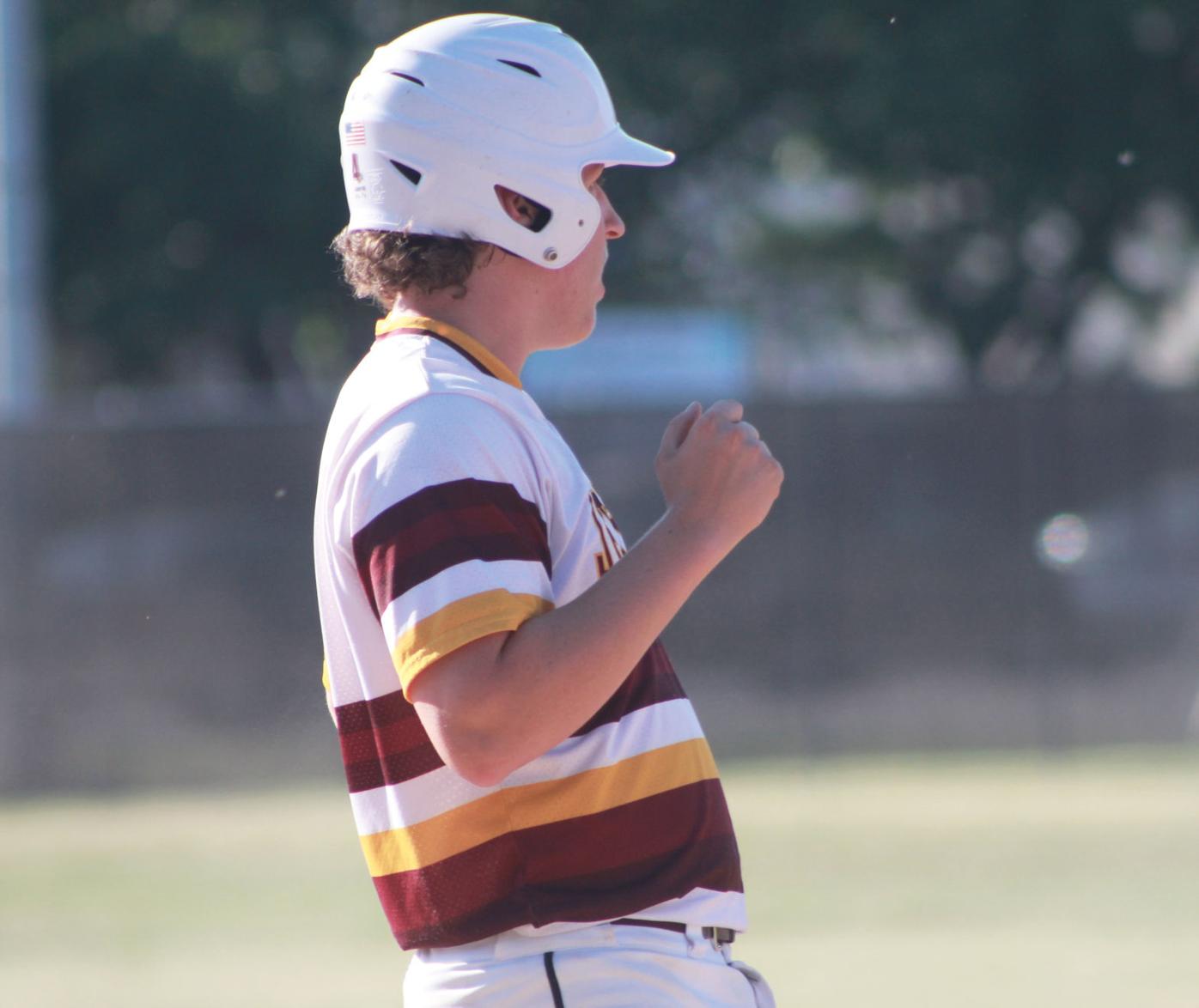 Eli Hoffman clenches his fist after an Eagle run during a WIAA Division 2 regional against Big Foot Tuesday at Fischer Field. The Eagles won 13-3 to advance to the regional final 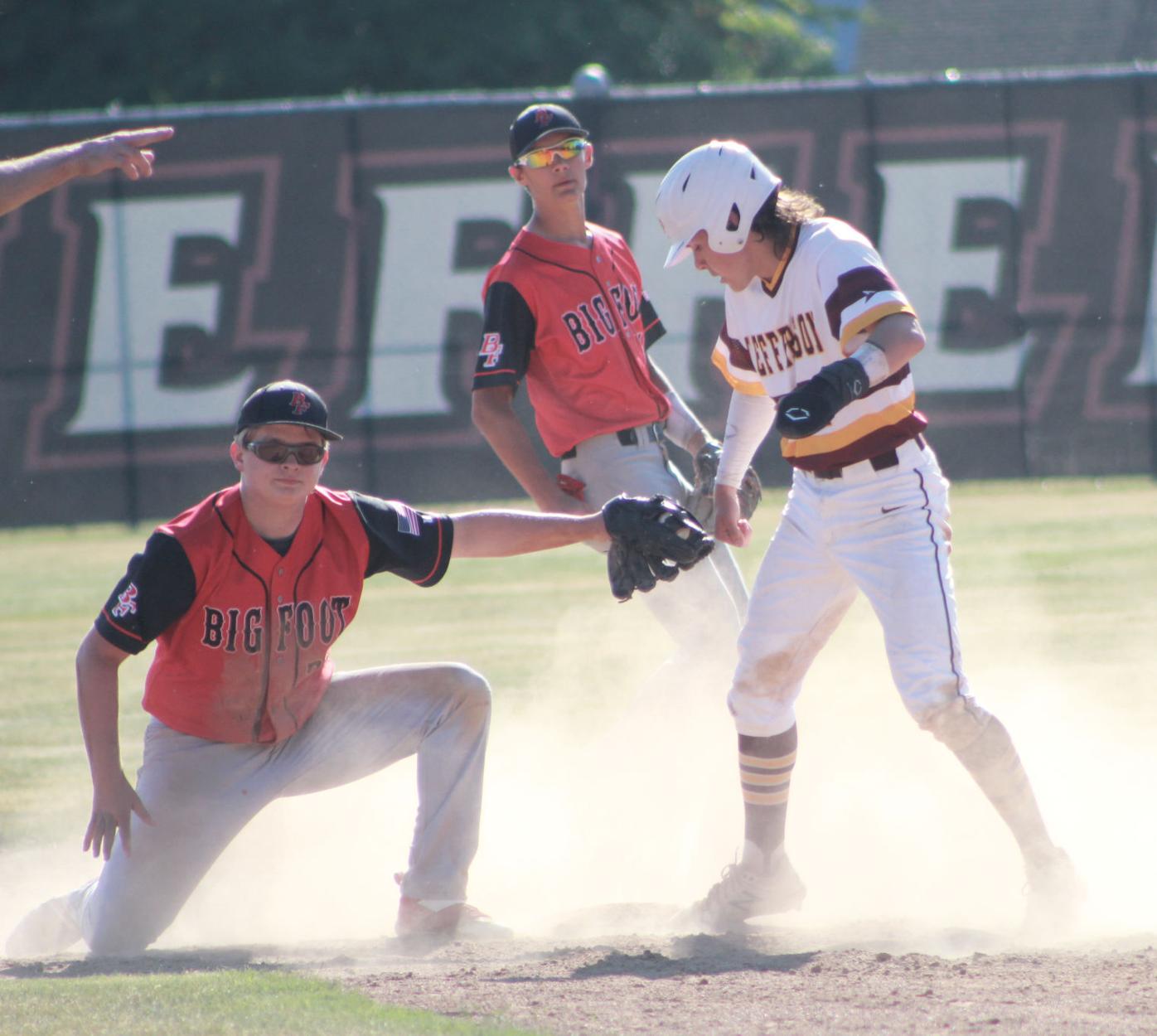 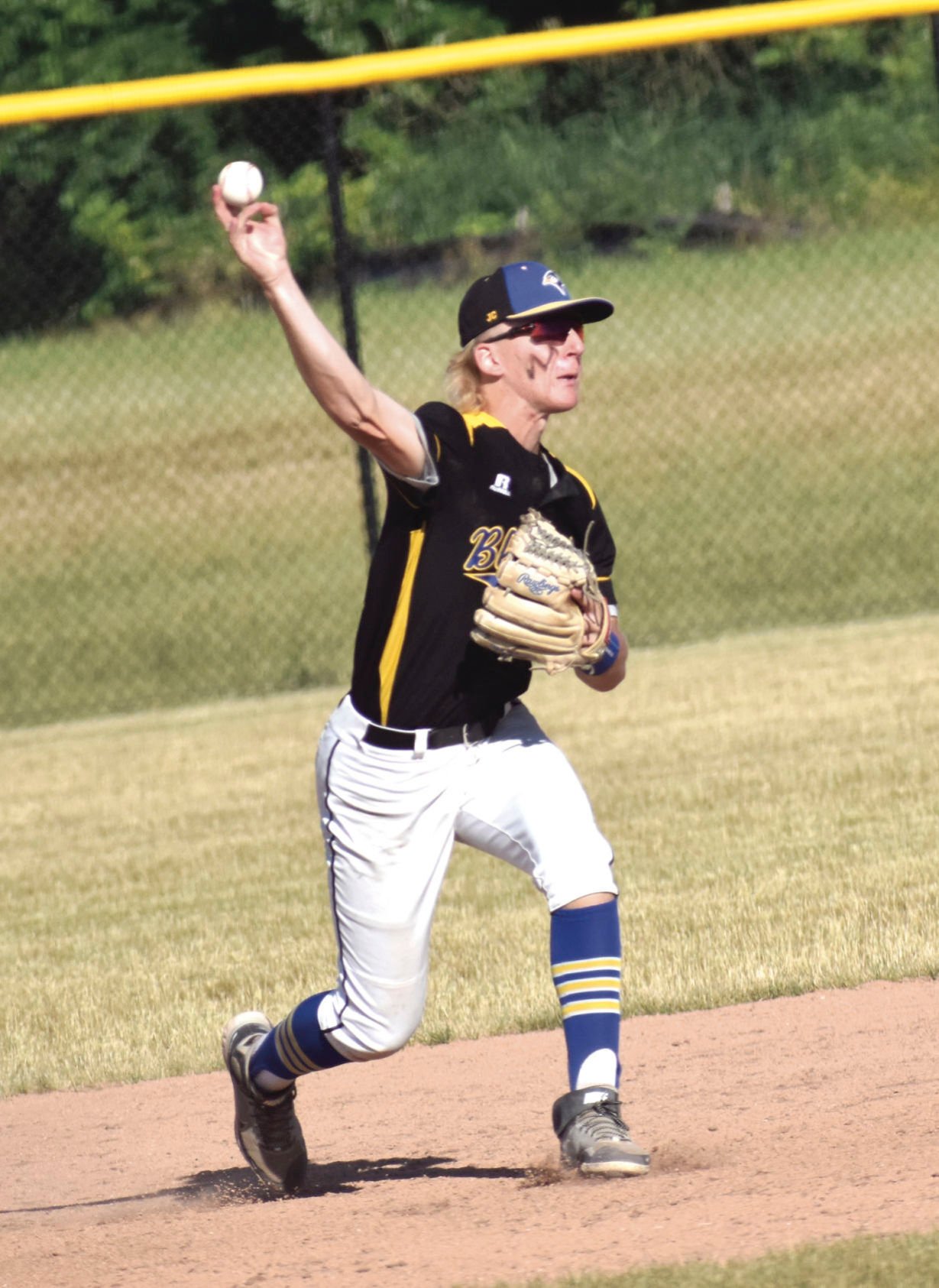 Johnson Creek senior shortstop Bow Hartwig throws to first base in time for an out during a WIAA Division 4 regional semifinal at JCHS against Randolph on Tuesday. The Bluejays won 3-0. 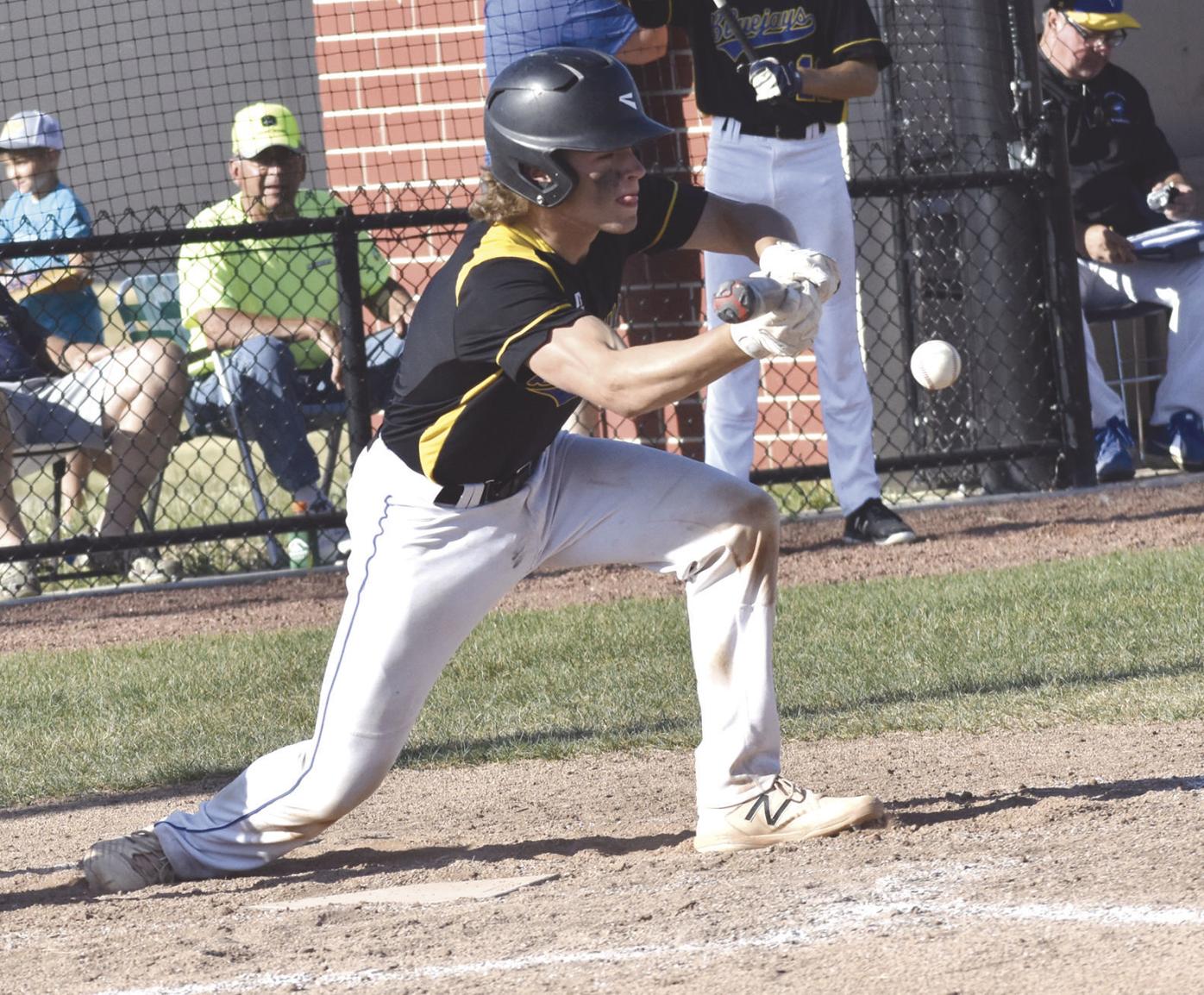 Eli Hoffman clenches his fist after an Eagle run during a WIAA Division 2 regional against Big Foot Tuesday at Fischer Field. The Eagles won 13-3 to advance to the regional final

Johnson Creek senior shortstop Bow Hartwig throws to first base in time for an out during a WIAA Division 4 regional semifinal at JCHS against Randolph on Tuesday. The Bluejays won 3-0.

JEFFERSON — The Eagles scored seven runs in the fifth inning as they pulled away from Big Foot to earn a 13-3 WIAA Division 2 regional semifinal win over the Chiefs Tuesday at Fischer Field.

Aaron Heine drove in three runs for top-seeded Jefferson. Leadoff hitter Haygen Miller homered in the bottom of the second inning to give the Eagles a 5-2 cushion.

It came after the Chiefs scored two runs in the top of the first inning. The Eagles responded with four runs in the bottom of the inning.

Big Foot cut the deficit down to 5-3 after a run in the top of the third. Jefferson scored the final eight runs of the game — racking up 17 hits in the victory.

Isaiah Hoffman got the win on the mound, pitching 4 1/3 innings. The right-hander allowed one hit and one earned run. Hoffman struck out six batters, but struggled with his control a bit, giving up four walks.

Jefferson will take on No. 3 Lakeside Lutheran in a regional final game Wednesday at Fischer Field.

KETTLE MORAINE — The Blackhawks bowed out in a WIAA Division 1 regional game against host Kettle Moraine on Tuesday.

EAST TROY — For the second straight postseason game, the Warriors saved their best hitting for crunch time, coming alive in the late innings to advance.

The Warriors (13-8) had four of their seven hits in the seventh inning.

Tyler Chopp, as he did in last Thursday’s quarterfinal win over Delavan-Darien, got the rally going. Chopp singled to center to lead off the frame and senior Gabe Uttech followed by singling a ground ball to left. Sophomore Nate Yaroch, who was the hero in the playoff opener with a walk-off single, flew out to center for the first out, leaving Chopp at second and Uttech at first.

Chesterman then dug in, lining a 1-0 offering from Ryan Kreft to center to plate two runs and give Lakeside a 3-1 edge. Chesterman moved up to third on a ground out by junior Tyler Marty, scoring an insurance run on junior Brock Schneider’s two-out double to left.

“Chesterman has been seeing the ball very well through both playoff games,” Lakeside Lutheran baseball coach Phil Dretske said. “He is a senior that is not ready for his high school baseball career to end, and does what he can to help out his team defensively and at the plate. All our guys battled at the plate all day long against the East Troy starter, Rice, but couldn’t connect.

“Those quality at bats early in the game forced East Troy to go to their number two pitcher, and our batters got aggressive at the plate and made some great things happen late.”

Senior Ian Olszewski earned the win for Lakeside, working 6 1/3 innings while allowing two earned on five hits with four strikeouts and five walks. Olszewski had a six-pitch strikeout to open the seventh before a pair of walks ended his afternoon, bringing Uttech on to close it out.

“Ian didn’t let anything rattle him out there on the mound,” Dretske said. “His pitches were right there and East Troy was being patient with those that just missed. He showed trust in his defense by making batters put it in play as he went deeper in the game.”

Uttech fell behind Alex Reyes 3-1, battling back with a pair strikes to record the punch out looking and the inning’s second out. Owen Rice had a run-scoring single to left next, pulling the Trojans (13-9) within 4-2 and sending the winning run to the dish. Uttech retired Tyler Dopke on two pitches on a fielder’s choice ground out to first base to make it final.

Lakeside advances to Wednesday’s regional final at top-seeded Jefferson, which beat fourth-seeded Big Foot 13-3 on Tuesday. The Warriors advance to their third regional final in as many seasons, winning a regional crown in 2019 after coming up just shy of reaching sectionals in 2018.

Uttech, who was 2-for-4, singled to lead off the game and the Warriors had runners at the corners with two down after a Chesterman single but a strikeout and fly out ended the frame.

Olszewski retired the first five hitters he faced, allowing his first hit with one down in the third. After an error, Olszewski worked out of a bases-loaded one-out jam by getting Rice to line out and Dopke to strike out.

Silas Helmos singled to open the fourth but a 4-6-3 double play quickly stymied the rally and a strikeout by Colby Atkinson ended the frame.

Rice drove in the game’s first run on a sacrifice fly in the fifth.

Chesterman, who was 3-for-3, doubled to lead off the sixth and scored on a two-out error by Alex Bruce at shortstop to tie it.

For East Troy, which was outhit 7-6 and didn’t have an extra-base knock, Rice struck out 11 and walked four over five two-hit innings on 95 pitches. Kreft took the loss, allowing four runs (three earned) on five hits with two strikeouts and a loss.

PALMYRA — The Panthers scored three runs in the bottom of the fifth, helping earn a WIAA Division 3 regional semifinal win over Belleville on Tuesday.

The second-seeded Panthers trailed 3-2 heading into the bottom of the fifth inning, but responded with three runs to take control of the game.

Noah Taylor and Riley Harris both drove in two runs in the win. Harris finished a perfect 3-for-3 at the plate.

On the mound, Casey Webber pitched a complete-game, allowing seven hits and one earned run. He also struck out six batters, surrendering just one walk.

Palmyra-Eagle will take on Waterloo — who upset top-seed Cambridge — in a regional final on Thursday.

The Bluejays scored a run in the first inning, adding two more in the third. That was more than enough support for Walling, who walked two while allowing a lone single to earn the decision.

“Braden really started to turn it on for us pitching wise two or three weeks ago,” Johnson Creek baseball coach Marc Blakeley said. “He struggled at the beginning of the year kind of locating. He was locating well today. He has a really good curveball and has worked on his changeup, which he’s been throwing the last couple of weeks.

“His velocity is up, he’s really been working hard in the weight room. Spotting up with his increase in velocity is helping him a ton.”

“Offensively it was a struggle,” Blakeley said. “That was the worse we’ve played offensively all year. We put it in play enough and were aggressive enough on the bases to scratch three runs across. When Braden or Bow are throwing like that, that’s all you need to do. We’ll reset. That’s what we just talked about.”

The Bluejays, who have won three straight and seven of their last eight, earn the right to face top-seeded Deerfield, which knocked off fourth-seeded Fall River 16-0 on Tuesday, in today’s regional final. The Demons swept the regular-season series in early May.

“They got us twice in the second week of the season,” Blakeley said. “Right after that game on the Thursday we said, and we’re pretty senior dominated with seven seniors on this team, that we want to play them again. I said ‘well let’s keep improving’ and now we’ve got our chance.

“We got our stud, Bow is going to be able to throw tomorrow full-go. We’ll have to put together good at bats against whoever they are throwing at us. It’s going to be a good game between two really good teams.”

Senior pitcher Caden Spors took the loss for the Rockets (12-12). He allowed three runs (one earned) over six innings, walking three and striking out two.

Johnson Creek junior rightfielder Logan Sullivan made a sliding grab to his left for the first out of the seventh. Walling then got the next two hitters in order to make it final.

CAMBRIDGE — Blake Huebner had a big day at the plate and mound as the fifth-seeded Pirates upset top-seeded Cambridge convincingly in a WIAA Division 3 regional semifinal on Tuesday.

Batting out of the leadoff spot, Huebner finished 3-for-3, driving in four RBIs while also scoring three times.

Waterloo scored three runs the first two innings combined, but broke things open with four runs in the top of the fourth inning.

Thomas Hoffmann recorded a double for Cambridge. It was the only extra-base hit for the Blue Jays.