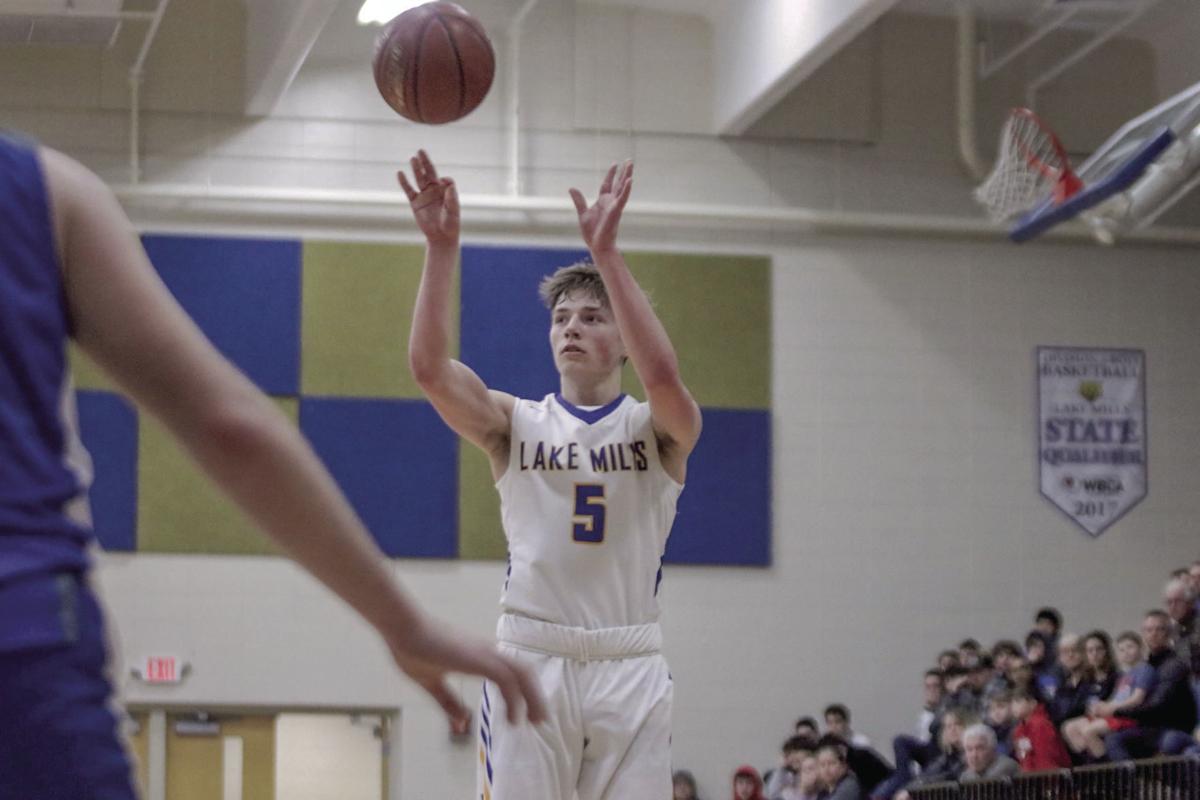 Drew Stoddard made four 3-pointers and scored 19 points for Lake Mills in its 75-52 victory over Lodi on Thursday night. 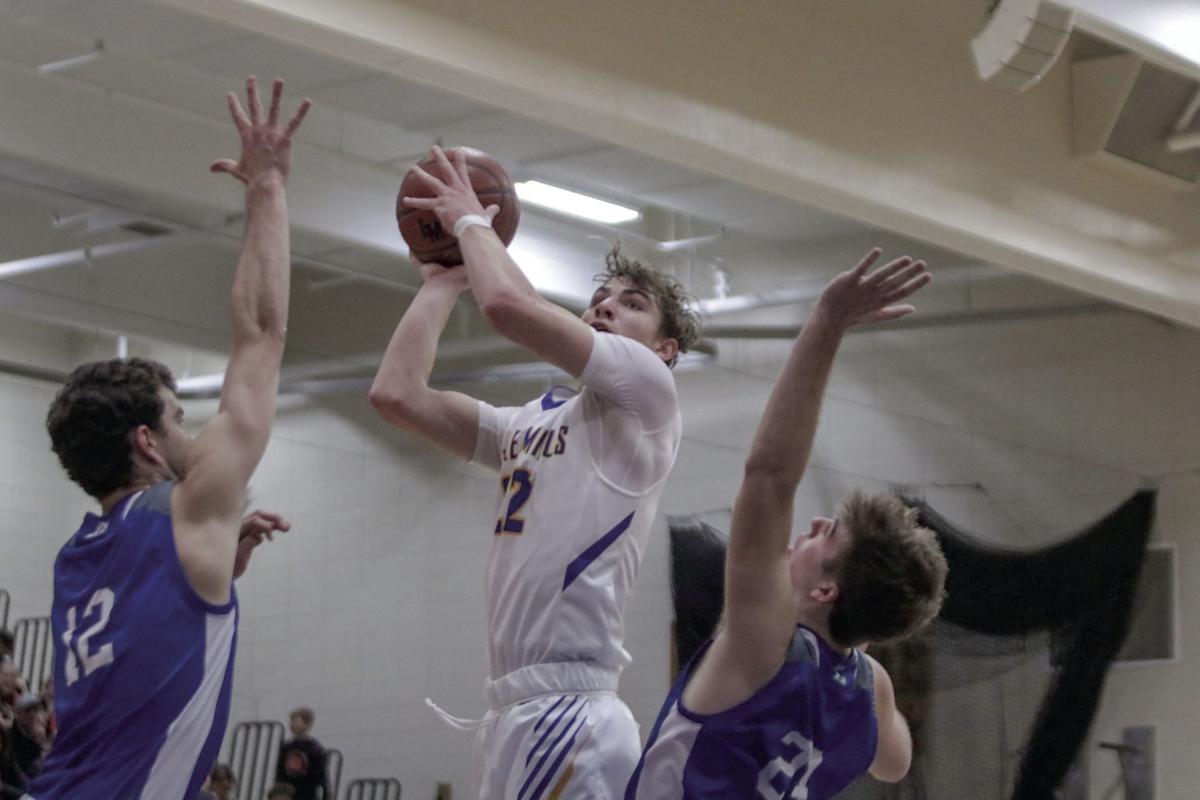 Adam Moen scored 10 points in the second half and helped Lake Mills control the glass as the L-Cats earned a 75-52 victory over Lodi in a Capitol North boys basketball game. 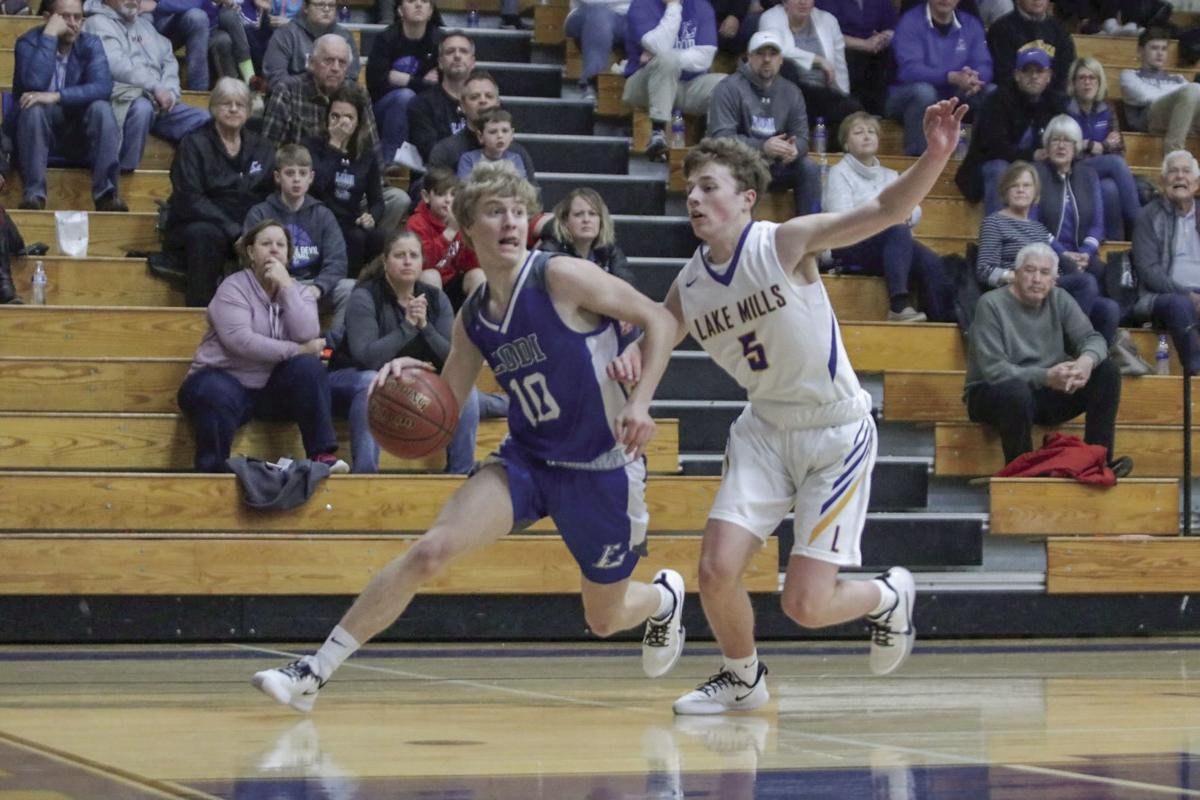 Quinn Faust drives baseline for Lodi in the second half of a 75-52 loss to the Lake Mills L-Cats. Faust scored eight points for the visiting Blue Devils.

Drew Stoddard made four 3-pointers and scored 19 points for Lake Mills in its 75-52 victory over Lodi on Thursday night.

Adam Moen scored 10 points in the second half and helped Lake Mills control the glass as the L-Cats earned a 75-52 victory over Lodi in a Capitol North boys basketball game.

Quinn Faust drives baseline for Lodi in the second half of a 75-52 loss to the Lake Mills L-Cats. Faust scored eight points for the visiting Blue Devils.

LAKE MILLS — The threat of getting beat in transition by the Lake Mills boys basketball team eliminated the man power Lodi could commit to attack offensive rebounds.

The L-Cats didn’t didn’t give up a single second-chance opportunity until the final possession of the second half and were able to pull away for a 75-52 victory against the visiting Blue Devils in a Capitol North game on Thursday night.

“They’re an outstanding basketball team,” Lodi coach Mitch Hauser said. “They’re playing with a lot of confidence and defending better than they have in a while. Things did not come easy for us on the offensive end. We were one and done tonight, which is a credit to their defense.”

Coming into the game, Lake Mills had clinched a share of the Capitol North title. With the win, they took it all to themselves.

“It feels better to have it for yourself,” said senior Matt Johnson, who made two 3-pointers in the second half and finished with eight points. “We came into this game having clinched it on Friday, but we wanted it for ourselves. That was our very first goal coming into this year to win a Capitol North championship. To do it with this group is really fun.”

Lake Mills (19-3, 9-1 Capitol North) opened the second half with a 9-0 run to take a 41-27 lead on a Johnson 3-pointer. Lodi (15-7, 7-3) didn’t score its first basket of the second half until Trey Traeder made a 3-pointer with 12 minutes, 58 seconds to play. The Blue Devils followed it up with another bucket 27 seconds later by Quinn Faust causing Lake Mills coach Steve Hicklin to call a timeout.

The timeout cooled the Blue Devils off and Lake Mills went on a 15-5 run that was closed out by a 3-pointer from senior guard Mike Herrington. The Herrington 3-pointer came after Jaxson Retrum pulled down a rebound, kicked it out to Adam Moen who passed up a good shot to find Herrington for a wide open 3 on the wing.

That rebounding has been a point of emphasis for the L-Cats recently.

“Adam was a monster on the glass for us tonight,” Hicklin said. “He really allows us to control the offensive boards when he’s on the court. With his passing and dribbling ability after he gets rebounds, he can ignite the fast break. That’s something that’s definitely who we are. We like to get out and go.”

And teams have learned that they need to get back to prevent layups in hopes of stopping them in the half court. Lodi avoided giving up transition layups, but couldn’t consistently stop them Blue Devils in the half court.

“Offensively, they’re so difficult to guard,” Hauser said. “Every one of them shoots is really well. They have a post presence that if you dig down, they’re going to find the shooter. If you don’t dig down, they have guys who can take advantage of you in one-on-ones.”

The Lake Mills L-Cats, who are the 8th-ranked team in Division 3 according to the Associated Press, will take on Clinton in a first-round WIAA regional quarterfinal on Tuesday at 7 p.m.