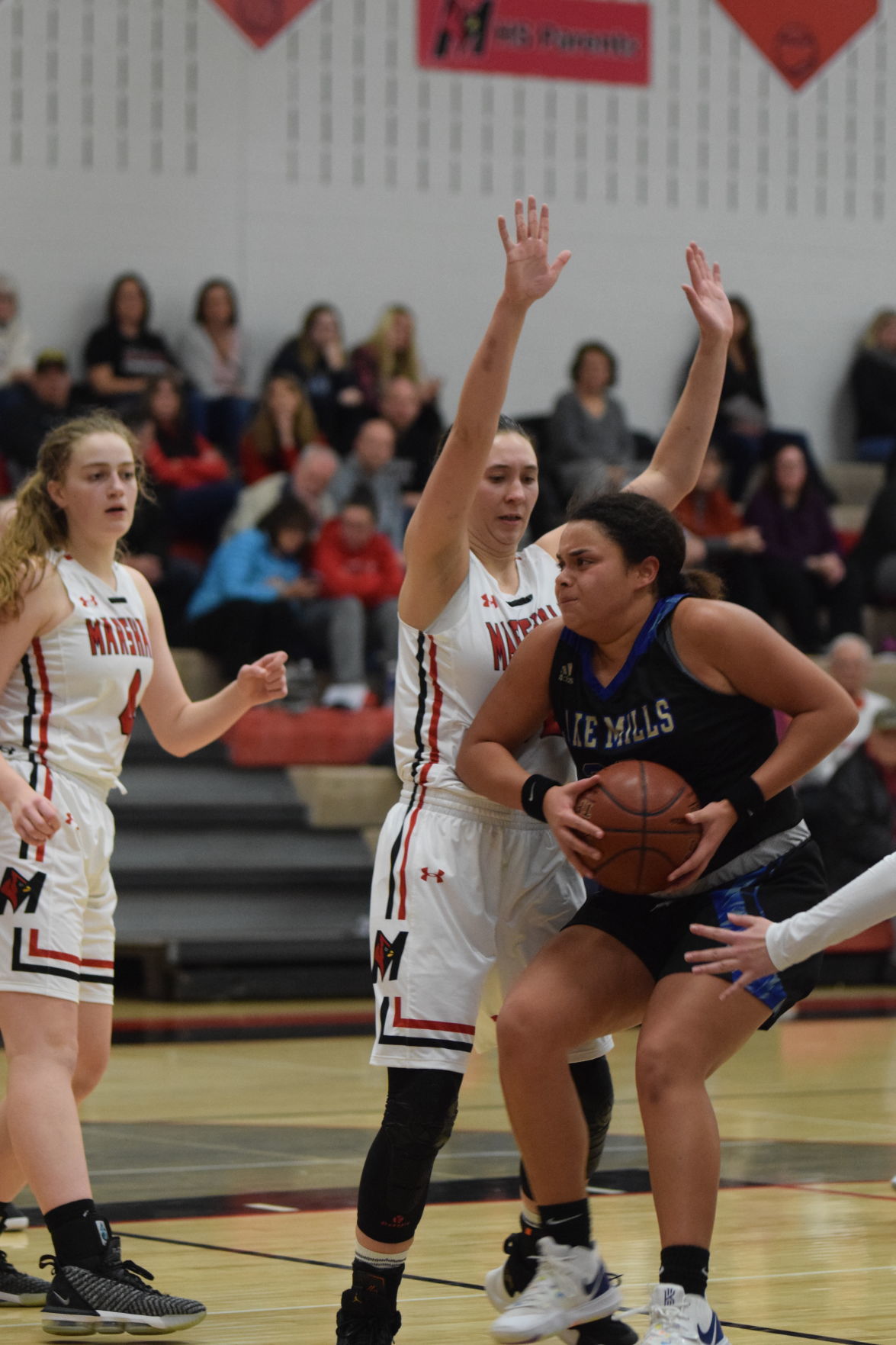 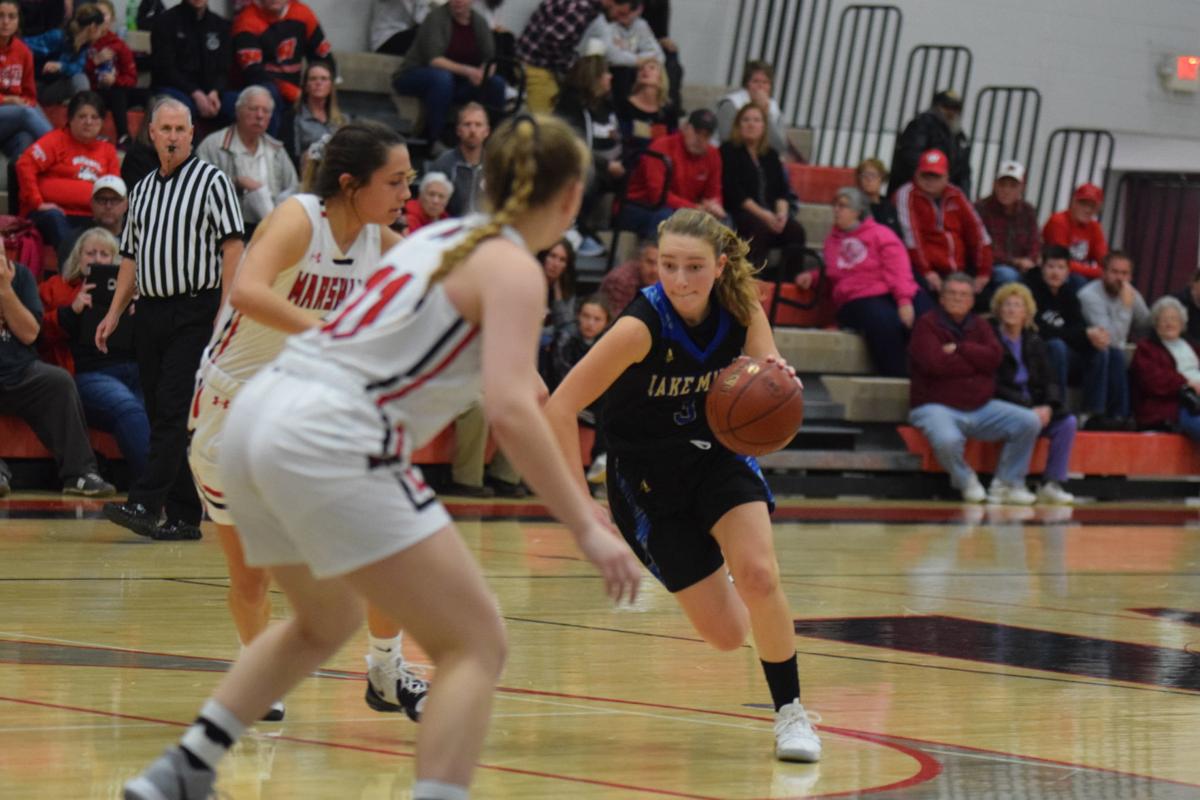 Junior Julianna Wagner scored a game-high 21 points for the sixth-ranked Lake Mills L-Cats in their 58-57 victory over fourth-ranked Marshall on Thursday night. 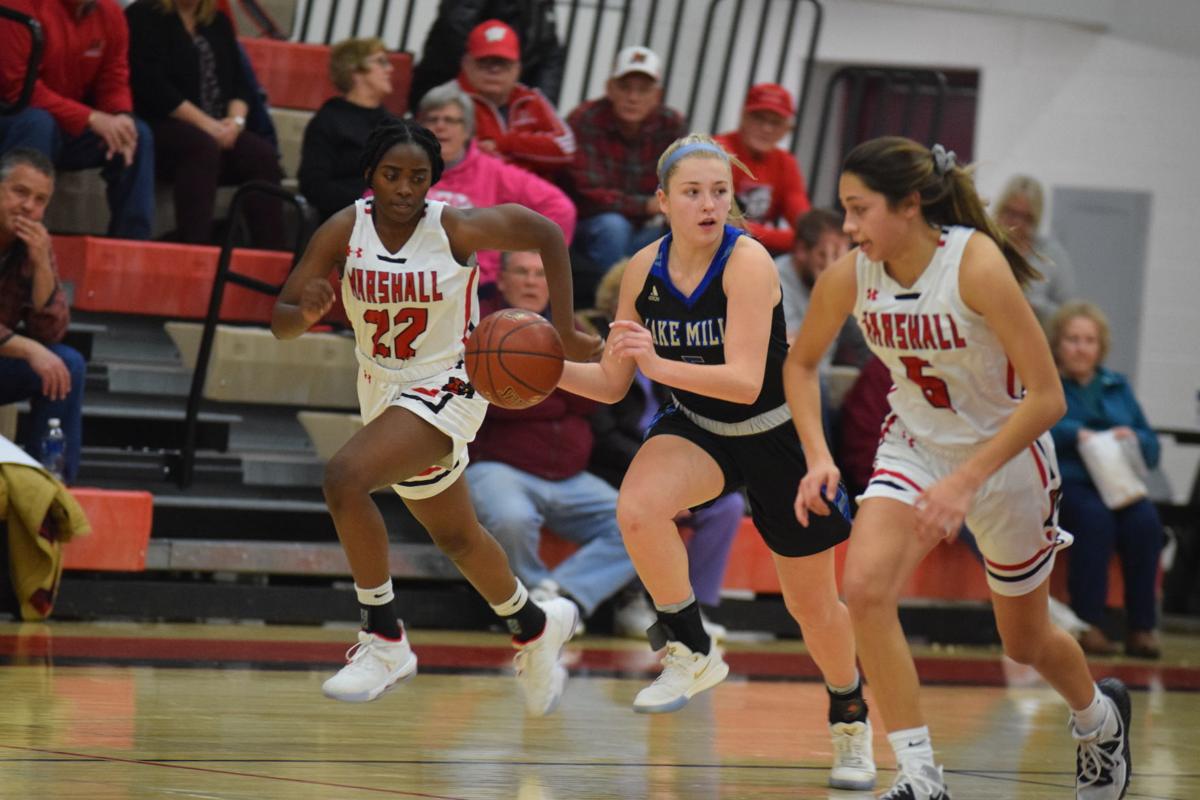 Junior Jade Pitta pushes pace for the Lake Mills L-Cats in their 58-57 victory over Marshall on Thursday night.

Junior Julianna Wagner scored a game-high 21 points for the sixth-ranked Lake Mills L-Cats in their 58-57 victory over fourth-ranked Marshall on Thursday night.

Junior Jade Pitta pushes pace for the Lake Mills L-Cats in their 58-57 victory over Marshall on Thursday night.

MARSHALL — The game certainly lived up to its billing.

Vivian Guerrero’s three-point play with 14.2 seconds remaining lifted Lake Mills to a 58-57 victory against Marshall in an early-season, non-conference battle of state-ranked teams on Thursday.

“My team worked really hard to get to that point, so I didn’t want to let them down,” said Guerrero, who finished with seven points.

The L-Cats (5-0), ranked sixth in the WisSports.net Division 3 Coaches Poll, entered enemy territory against fourth-ranked and two-time defending state champion Cardinals in a matchup of Capitol Conference champions (the L-Cats won the North while the 2018-19 Cardinals won the South) in an early-season battle.

Trailing by as many as six points late in the game, Lake Mills dug deep to pull out its first win over Marshall since winning 55-29 on Dec. 13, 2011.

“We battled and I’m proud of my kids for the way they fought,” said Lake Mills head coach Brandon Siska. “With (Taylor) Roughen going down with an ankle injury early we had a lot of kids step in and do the job.”

Marshall (3-2) led 53-47 after junior Laura Nickel buried a pair of free throws with 6:24 to play. But four consecutive points, two by McClain Mahone and two by Julianna Wagner, pulled the L-Cats to within a point with just over 90 seconds remaining.

After Rain Held hit 1 of her 2 free throws to give the Cardinals a 57-55 lead, Guerrero connected on a layup and was fouled by Anna Lutz leading to the three-point play.

Marshall used a 10-0 run to build a 17-9 lead midway through the first half, but Lake Mills would rally. Back-to-back 3s by juniors Hannah Lamke and Julianna Wagner completed a 13-0 outburst as the L-Cats regained the lead before taking a 28-25 advantage into halftime.

Marshall’s Anna Lutz, averaging 28.8 ppg coming in, needed only four points for 1,000 in her career. But suffocating defense by Guerrero and junior Kayla Will made her work for the milestone. The reigning Capitol South Conference co-Player of the Year scored her 1,000th career point on a layup with 1:27 left in the first half, tying the game at 25, but Lamke’s 3-pointer with 1:10 to go gave the L-Cats the lead back.

Lutz finished with a season-low eight.

Lamke scored nine of Lake Mills’ final 12 points at the end of the first half. The L-Cats played most of the game without Roughen, who went down with an apparent ankle injury with 11:47 remaining in the first half.

Wagner led the L-Cats with 21 points.

Lake Mills continues its season on the road Tuesday at 7:15 p.m. against Wisconsin Dells.