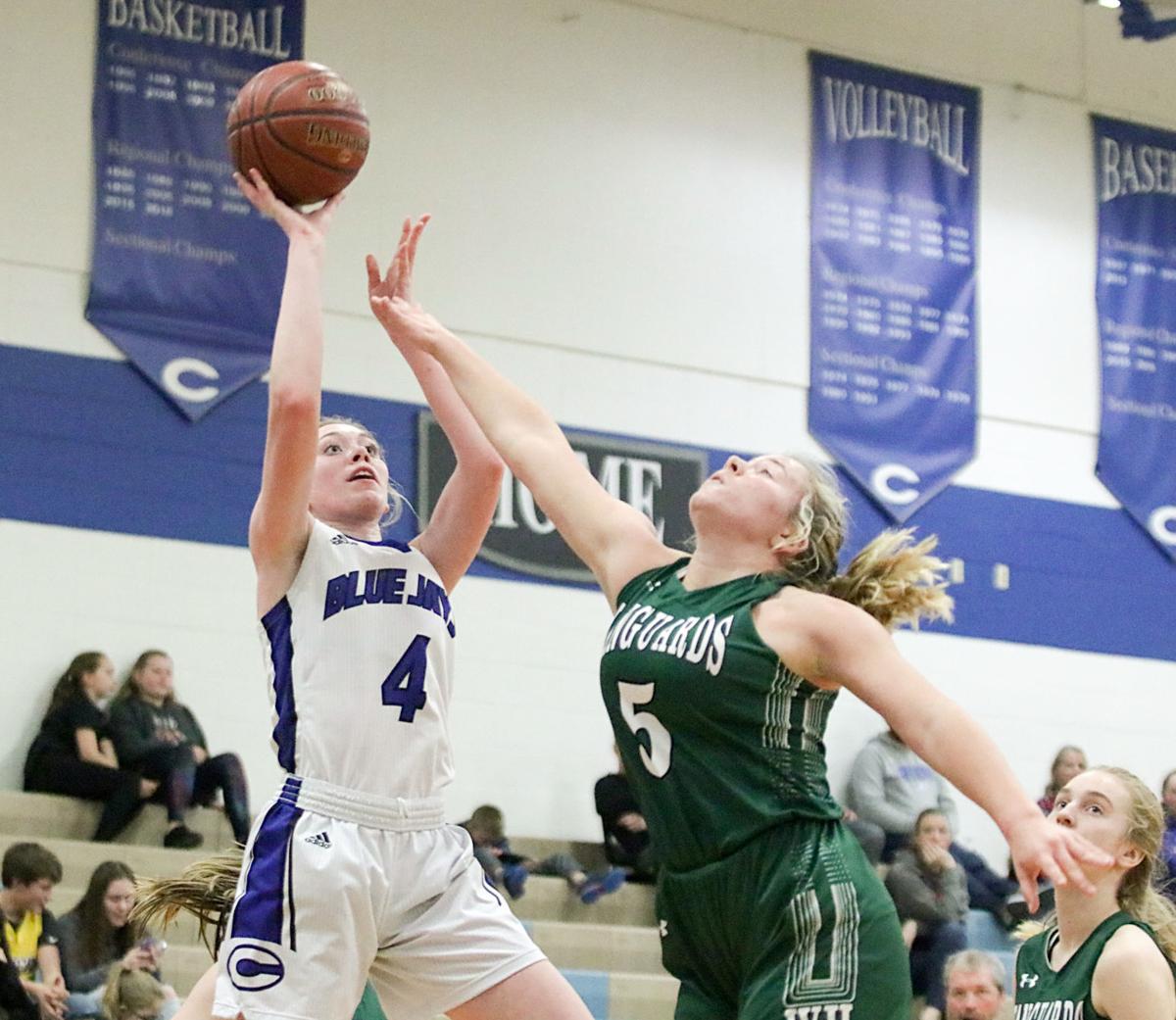 Sophomore Mayah Holzhueter made 10 of her 13 free throws and finished with 21 points for Cambridge in its 59-55 victory over Wisconsin Heights in a Capitol South game on Thursday. 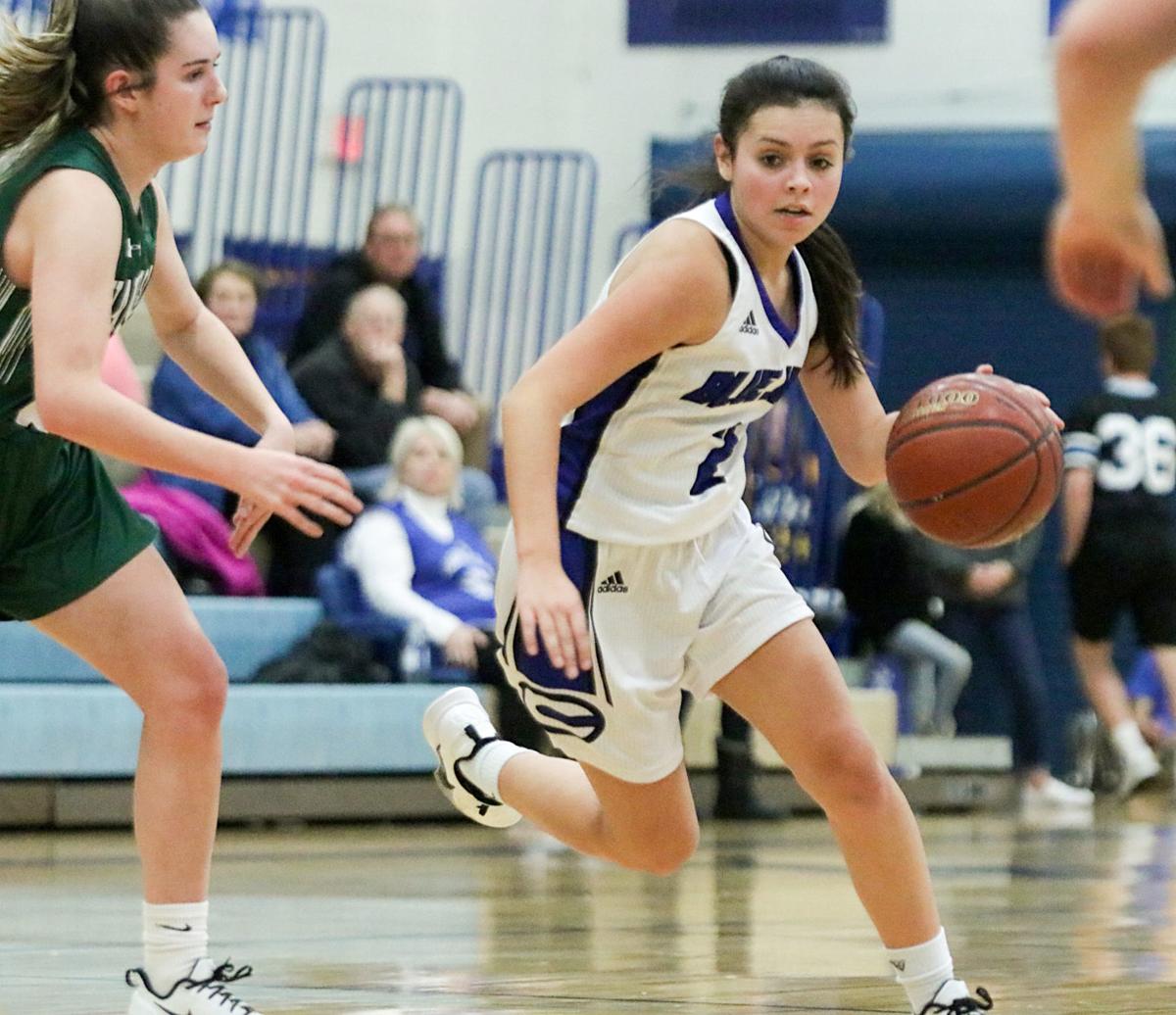 Senior Ashlynn Jarlsberg made five 3-pointers in the first half for Cambridge as the Blue Jays earned a 59-55 victory over Wisconsin Heights on Thursday.

Sophomore Mayah Holzhueter made 10 of her 13 free throws and finished with 21 points for Cambridge in its 59-55 victory over Wisconsin Heights in a Capitol South game on Thursday.

Senior Ashlynn Jarlsberg made five 3-pointers in the first half for Cambridge as the Blue Jays earned a 59-55 victory over Wisconsin Heights on Thursday.

CAMBRIDGE — Mayah Holzhueter and Gracie Korth navigated foul trouble about as well as is possible and the Cambridge Blue Jays survived.

The Blue Jays saw Wisconsin Heights wipe away a 16-point lead in the second half with Holzhueter and Korth on the bench for a four-minute stretch.

They managed to help steady the defensive end of the court and Cambridge took the lead back with 80 seconds left when Holzhueter made three consecutive free throws before closing out a 59-55 victory over Wisconsin Heights in a Capitol South girls basketball game on Thursday night.

Holzhueter scored 16 of her 21 points in the second half to help the Blue Jays absorb a 26-3 run by Wisconsin Heights (7-10, 3-4 Capitol South). The Blue Jays (9-8, 5-2) went from up 16 points to down by seven and it was a 3-pointer by Holzhueter with 3 minutes, 17 seconds left that pulled Cambridge out of an offensive slump.

When asked why Holzhueter was effective in the second half, Cambridge coach Kelly Cunningham needed a second to reflect.

“Oh, Mayah; she’s so versatile,” Cunningham said. “When she wasn’t getting looks inside depending upon who was guarding her, she could go to the outside and put someone else inside. She can hit shots out there and she hit some big ones out there for us.”

Once that shot went through, there was a renewed sense of belief on the defensive end for Cambridge. The Blue Jays were relying on traps and jumping passing lanes to create transition baskets. After the Holzhueter 3-pointer with 3:17 to play, senior guard Olivia had a steal and a layup and Ashlynn Jarlsberg, who made five 3-pointers in the first half, had steals on the next two defensive possessions.

“We needed to get stops, that was it,” Williams said. “We had to keep them one and out. End the possession.”

And defense led to offense.

“The energy that that creates is huge,” Cunningham said. “When the trap was there and we anticipate and pick the next pass, they were working well shifting and reading each other to pick those.”

Williams finished with 10 points and Taylor Stenklyft had eight.

“It was good that we could get No. 12, Adler, out of the way so that we could work the post more,” Williams said. “It’s nice that we have really good shooters and post players that we can rely on. If one isn’t working out, we have the other one there. We just had to get the ball into Mayah and Gracie in the post.”

Jarlsberg’s only point came when she gave Cambridge a 53-51 lead with just under 2 minutes to play. When Holzheuter got fouled in the act of shooting a 3-pointer, it was Jarlsberg who forced the held-ball whistle to give Cambridge possession on defense.

“That was huge for her to hit five 3s in the first half, so again, even though she wasn’t scoring she contributed with her quickness and anticipation to get those steals,” Cunningham said. “It was some out on top, there were some down low where she picked them off down low when she’s kind of laying in the weeds.”

Cambridge will go on the road Tuesday to play against Belleville at 7:30 p.m.