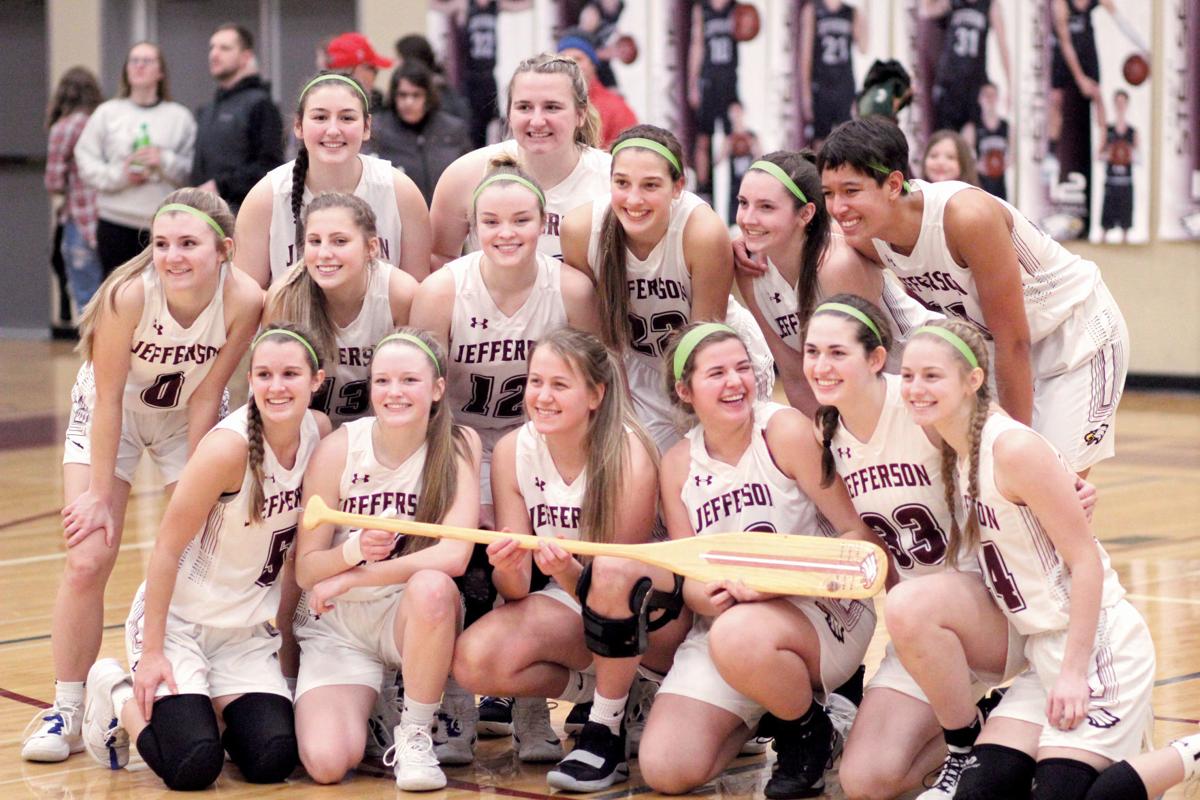 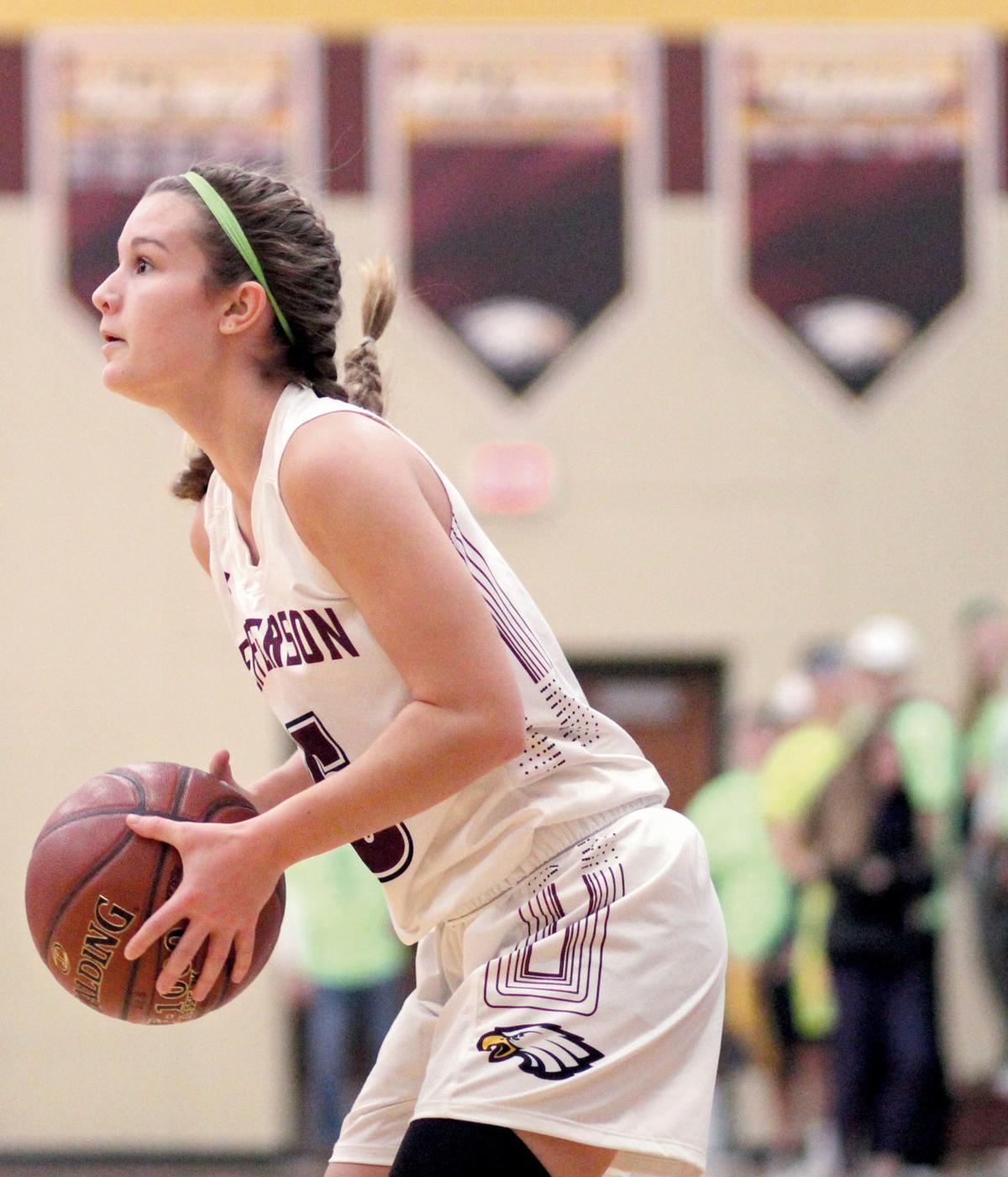 Junior Ainsley Howard made four 3-pointers and scored 20 points for the Jefferson Eagles in their 53-42 victory over host Elkhorn on Friday night. 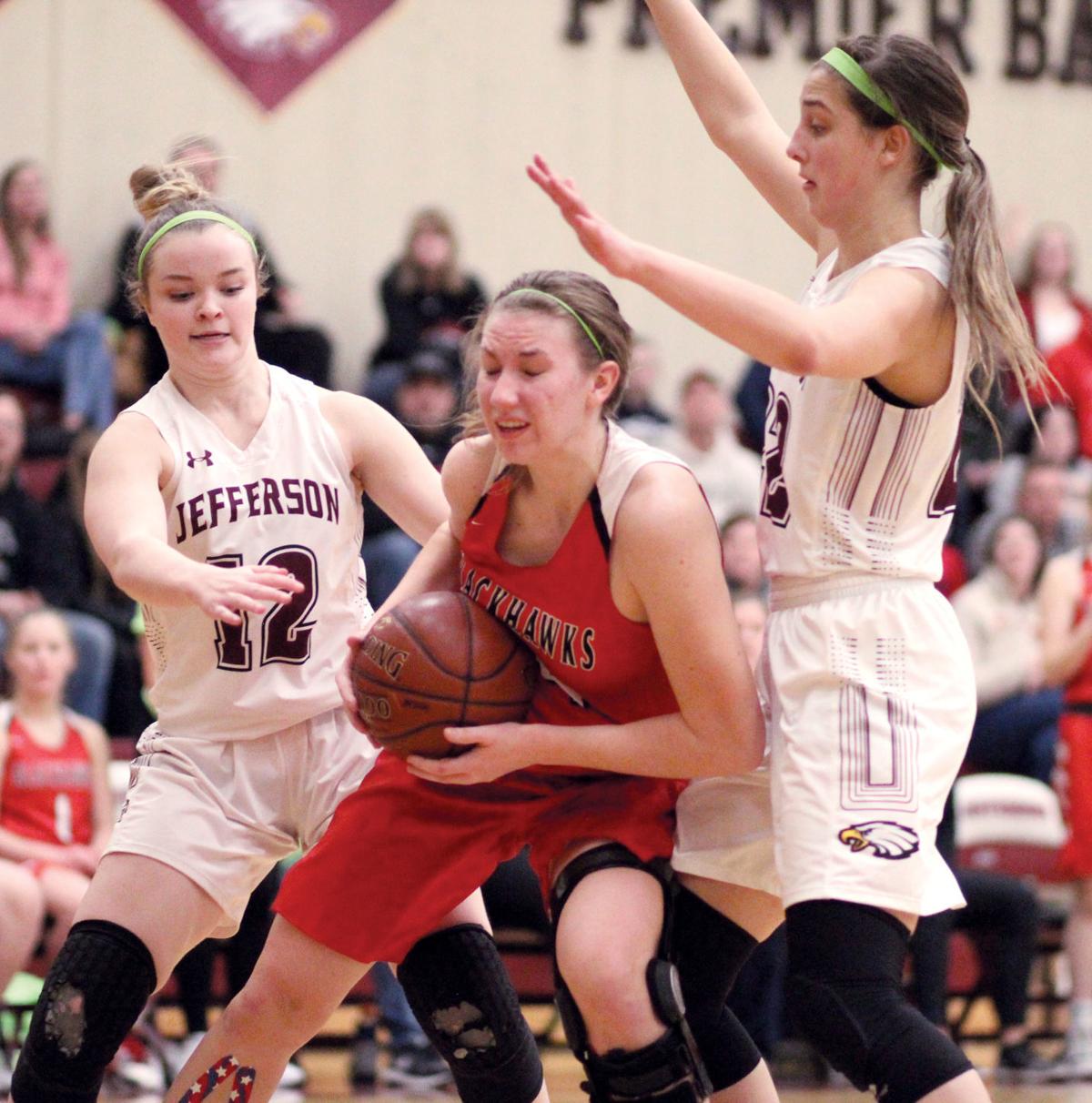 Junior Ainsley Howard made four 3-pointers and scored 20 points for the Jefferson Eagles in their 53-42 victory over host Elkhorn on Friday night.

JEFFERSON — Ainsley Howard didn’t have too many open looks early in the first half.

Often crowded by the Fort Atkinson zone, it took the junior guard time to get her open shots. When they came, she made them count.

Howard poured in four 3-pointers the final five minutes of the first half, helping Jefferson beat rival Fort Atkinson, 62-53, in the Battle for the Paddle Saturday night at Jefferson High School.

“We got her (Howard) open and she was on fire,” Jefferson head coach Mark Peterson said. “Those were huge shots. We were behind and they had momentum. Those four 3s — you have to give the kids credit — they executed and she knocked them down.”

Jefferson trailed by as many as six points in the first half, but Howard connected on all four of her 3-point attempts the final 4 minutes, 41 seconds of the first to help give the Eagles a 32-26 lead going into the break.

“Coach called out the sets for me and everyone was in sync,” Howard said. “It really helps me to get open shots.”

Fort Atkinson tied the game at 44-44 with 8:55 to play, but Jefferson held on to its halftime advantage as Howard scored seven of her game-high 20 points the final 8:43 of the game.

“We just kind of let their shooters get free,” Fort Atkinson head coach Michael Rajsich said. “We made some adjustments, we knew they could shoot it, we just had some miscommunications. Other than that we played really hard, the girls wanted it.”

Jefferson junior Josie Peterson halted a 10-3 Fort Atkinson run with a basket just under the six-minute mark. From there, Howard got loose, making all four of her 3-point attempts from the 4:41 mark to the 1:13 mark.

Sophomore Abby Helmink also added four points down the stretch of the first half to help Jefferson (10-10, 8-8 Rock Valley) end the first on an 18-6 run.

Senior Anna Schoenike scored seven of the 14 points, including five straight to tie the game.

“We made some adjustments,” Rajsich said. “We put Anna a little bit more on the shorter corner then the block. We did a better job getting it in to her.”

Howard made a pair of free throws and sophomore Riley Madden made a 3-pointer to make it 49-44 Eagles.

A free throw from Staude made it a one-possession game as Jefferson led 51-48 with 3:54 to play, but Howard came through the down the stretch of the half again with a 3-pointer to push the lead to six points. Despite Fort Atkinson continuing to keep it close, Jefferson held at least a two-possession lead the rest of the way.

“It was just a scrum out there at times,” Peterson said. “It was a physical battle — when you talk about Battle for the Paddle — talk about physical. Both teams played their tails off. You have to give them a lot of credit. Their record doesn’t show it, but they’ve really improved this year.”

Sophomore Aidyn Messmann and Madden finished in double digits for Jefferson with 11 and 10 points, respectively.

“I know not every player played tonight, but it was really a collective team effort,” Peterson said. “We cannot do this without all our kids.”

The victory was Jefferson’s fourth straight Battle for the Paddle victory.

“It’s a confidence booster for us because we’re so young,” Howard said. “It’s a big deal.”

Fort Atkinson will take on another Rock Valley Conference opponent Tuesday when the Blackhawks host Whitewater at 7:15 p.m. Jefferson will head back into Rock Valley play with a road game against East Troy Thursday at 7:15 p.m.

Parks around the county