Fort Atkinson senior Thomas Witkins (left) tries to fight off a single leg takedown attempt by Monroe’s Alex Witt during the third place match at 182 pounds at the Badger Conference wrestling tournament in Watertown on Saturday. Witt finished the move for the winning takedown to earn a 3-1 decision. 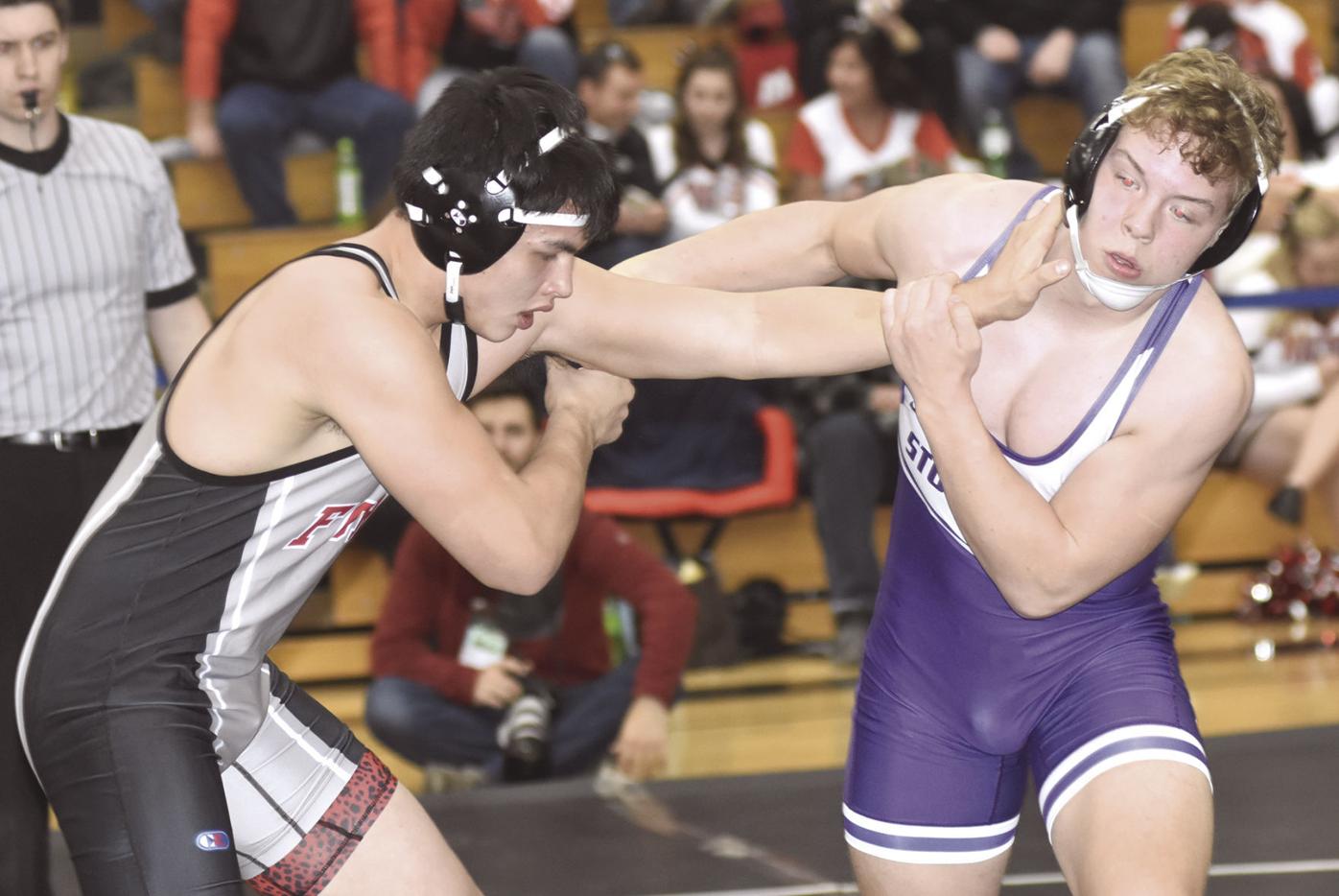 Fort Atkinson senior Thomas Witkins (left) tries to fight off a single leg takedown attempt by Monroe’s Alex Witt during the third place match at 182 pounds at the Badger Conference wrestling tournament in Watertown on Saturday. Witt finished the move for the winning takedown to earn a 3-1 decision.

WATERTOWN — Finishing strong was a regular theme for the Fort Atkinson Blackhawks this season.

During the Badger Conference wrestling tournament on Saturday, that theme eluded them as they went 2-11 in the final round before ultimately scoring 181 points and taking fifth place at the tournament hosted by Watertown.

Stoughton won the tournament with 326 points and Milton came in second place with 240 points. Five Stoughton Vikings took first place and two took third place. The Vikings went 10-3 in their final round.

Junior 195-pounder Jacob Horvatin was the only Fort Atkinson wrestler to make it into the title bout. Horvatin (29-8) was defeated by Stoughton junior Rudy Detwiler (20-3) in an 8-2 decision.

Horvatin was caught and taken down early in the first period and gave up three back points. From that point on, the match was evenly matched, but Detwiler went conservative knowing he didn’t need to take any unnecessary risks.

“He gave up five points early on in what I think was a fluke situation for him because he doesn’t get caught like that very often,” Fort Atkinson coach Ryan Gerber said. “When you look at that match, if you take away those five points right away, the match is completely different.

“I feel like that was an uncharacterized position that he got himself into. We’ll work hard to make sure it doesn’t happen again and now that match is a lot tighter.”

“I addressed it a little bit when we got home. From my perspective trying to frame the day, we can’t just dwell on the final round,” Gerber said. “We finished fifth place at the Badger Conference tournament. To finish fifth at that tournament is a big deal — that’s the deepest I can remember the conference ever being.”

Trevino (25-13) was defeated by Stoughton sophomore Trenton Dow (33-10) in the quarterfinals by a 7-3 decision. Trevino earned a 59-second pin in his first match and a pair of decisions in the consolation bracket to work his way into the third-place match where he was defeated by Reedsburg junior Nick Coplien (17-5).

Koehler (19-16) was pinned by Milton senior Jordan Stivarius (20-15) in his first match of the day after receiving a bye through the first round. A victory by pin and decision later, Koehler and Stivarius faced off again in the third-place match and was pinned at 4:42.

Witkins, a junior returning WIAA Division 1 state qualifier from a year ago, was pinned in the second period by Baraboo junior John Gunderson (27-0), proceeded to win the 182-pound championship by pinning Sauk Praire senior Marcus Hankins (37-4) in the second period.

Worden (28-10) went 4-1 on the day after losing an 8-0 major decision in the semifinals to Reedsburg senior Caden Fry (31-6), who eventually won the title against Watertown sophomore Walker Wichman (32-7).

“We had a pretty good idea of what we were getting watching him in the off-season,” Gerber said. “I don’t know if any of us predicted he would be this good. He’s a freshman in the Badger Conference and he’s in the south competing against some really stout teams. He has had success and it hasn’t gone to his head. There are kids from other schools that have started the year off really well and didn’t finish the year like they started.

“Aiden has done a tremendous job staying consistent and getting better.

“A lot of credit goes to his family. It’s a wrestling family — dad wrestled for Coach (Terry) Kramer a number of years ago, so they know how to provide him with the support he needs. It’s a rare instance where we have a wrestling family.”

As for the rest of the Blackhawks, senior Sawyer Brandenburg was the next best finisher. He took fifth place in the 120-pound weight class. Other than Brandenburg and Worden, none of the Fort Atkinson wrestlers won their final match: Something that will be emphasized throughout the week.

“The other thing to keep in mind for anyone looking at the results is to see who we’re competing against,” Gerber said. “Sometimes looking at the overall record with how we finished in a round doesn’t necessarily tell you what you need to know.

“Context is king. Understanding who we were competing against is just as important as the result. We had to beat some tough kids to get into those rounds and we just didn’t have enough to finish the day as strong as we would have liked to.

“But we’ll focus on treating those matches like we would any other match and hopefully we’ll be talking about how well we finished the day next week.”

And next week, Fort Atkinson will travel to Sun Prairie for a WIAA Division 1 regional on Saturday at 10 a.m.