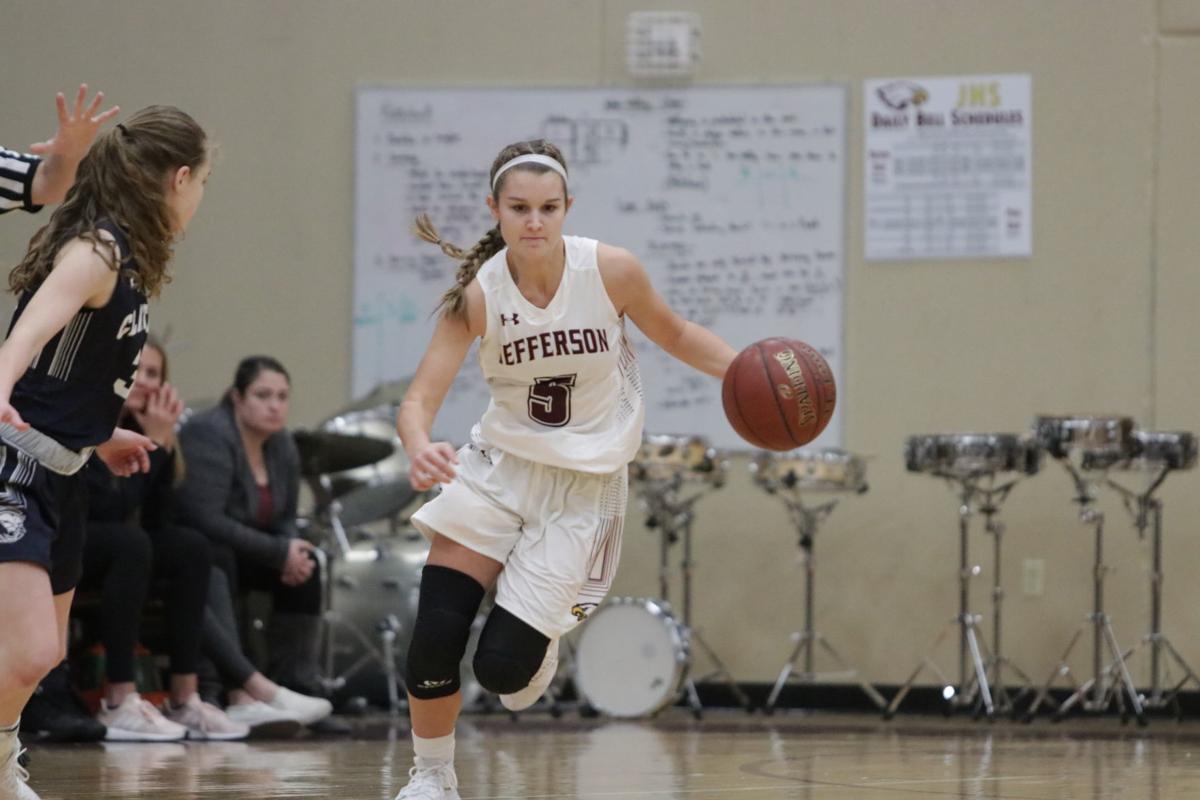 Ainsley Howard breaks the back-court pressure for the Jefferson Eagles in their 64-44 loss to Clinton on Friday night. 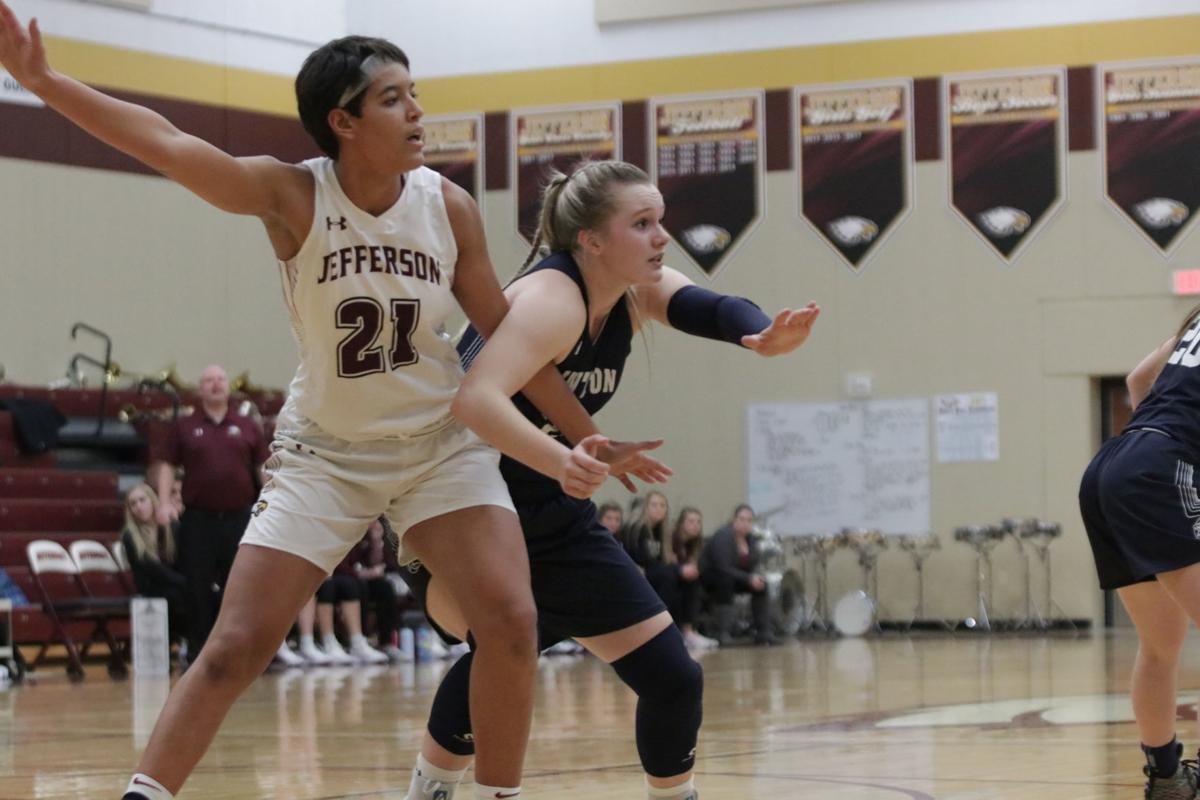 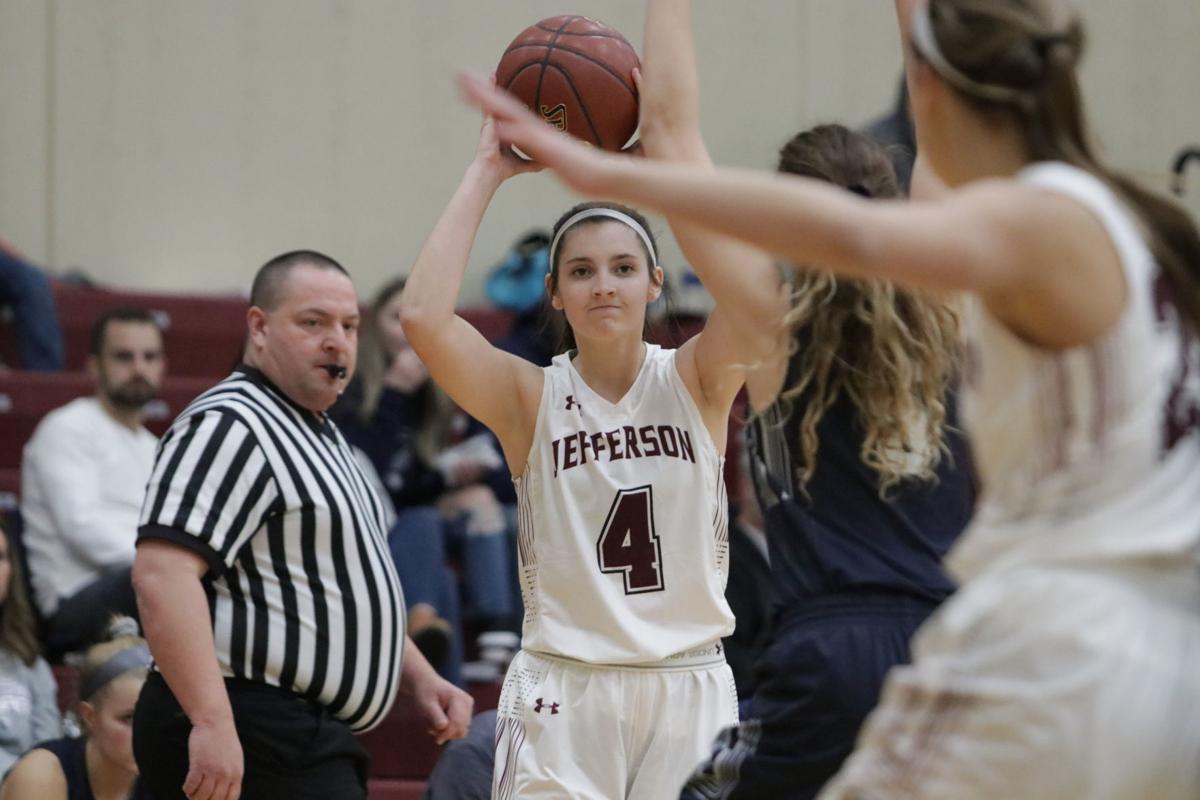 Sophomore Aidyn Messmann considers an entry pass to Jefferson freshman Ayianna Johnson in the first half on Friday night. The Eagles were defeated, 64-44, in a Rock Valley Conference girls basketball game.

Ainsley Howard breaks the back-court pressure for the Jefferson Eagles in their 64-44 loss to Clinton on Friday night.

Sophomore Aidyn Messmann considers an entry pass to Jefferson freshman Ayianna Johnson in the first half on Friday night. The Eagles were defeated, 64-44, in a Rock Valley Conference girls basketball game.

JEFFERSON — It was evident from the first few possessions that Clinton had a physical advantage against Jefferson.

The Cougars made everyone on the Jefferson offense uncomfortable from the forwards in the post to the guards trying to cut into the lane.

The result was a 12-0, tone-setting run to open a game that finished with Clinton earning a 64-44 victory against host Jefferson in a Rock Valley Conference girls basketball game on Friday night at Premier Bank Gymnasium.

“We need to be stronger, make better back cuts and be stronger with the ball,” Jefferson coach Mark Peterson said. “It’s as simple as that. They took it to us.”

Clinton made three 3-pointers in the first 11 possessions to help build its advantage. Senior Hannah Welte made one and Addyson Ciochon made a pair of 3’s including one to take a 15-2 lead.

When Ciochon stepped outside to hit those 3-pointers over the defense of Josie Peterson, the vulnerabilities of Jefferson’s defense were exposed as Peterson couldn’t remain in the post as a rim protector. Instead, she would have to honor the perimeter shooting of Ciochon, who finished the first half with 10 of her 19 points.

“We knew she was really tough in the post, but then she knocked those 3s down over Josie and that’s an even tougher matchup,” Mark Peterson said. “Josie is a decent defender in the post, but when she has to come out and defend the shot while also worrying about the drive past her — that makes it really tough.

“Credit to (Ciochon), she knocked shots down.”

Sophomore Aidyn Messmann made a basket with an assist to freshman Ayianna Johnson for Jefferson to trim the deficit to six points but a turnover on the next possession led to an easy Clinton layup and the lead was 19-11 with 6 minutes, 24 seconds to play in the first half.

Sophomore Riley Madden was able to find a soft spot to the left of the top of the key for a pair of 3-pointers, but that merely helped Jefferson keep pace with Clinton instead of cutting into the deficit.

For each quality possession Jefferson had, it seemed Clinton guard Liz Kalk, a 5-foot-10 senior, was able to get a steal and an easy layup going the other direction. Kalk finished with 20 points. Hannah Wolte made three 3’s for Clinton and finished with 11 points.

“I thought in the second half, we played stronger with the ball and put in more effort, but I think this young group needs to figure out what it’s going to take energy and effort wise before the game and once you enter the game to take steps forward as the season progresses,” Peterson said. “We’re just going through growing pains of not having (Olivia Ganser) to go to as a scorer — I’m not going to refer to that anymore (this year) after this, but they have to learn that somebody else has to step up and we have to play as a team and not just rely on one person.

Jefferson continues its season on the road Thursday against Big Foot at 7:15 p.m.

McFARLAND — Adrienne Kirch scored 21 points for the McFarland Spartans to lead them to an 80-61 victory against visiting Whitewater in a Rock Valley Conference girls basketball game on Friday.

Kacie Carollo scored 21 points and Abby Grosinske added 17 points for Whitewater. Cassidy Laue scored 14 points and none of the other Whippets scored more than five points.

McFarland had five players with at least seven points.

Whitewater will continue its season on the road against Monona Grove on Tuesday at 7:15 p.m.