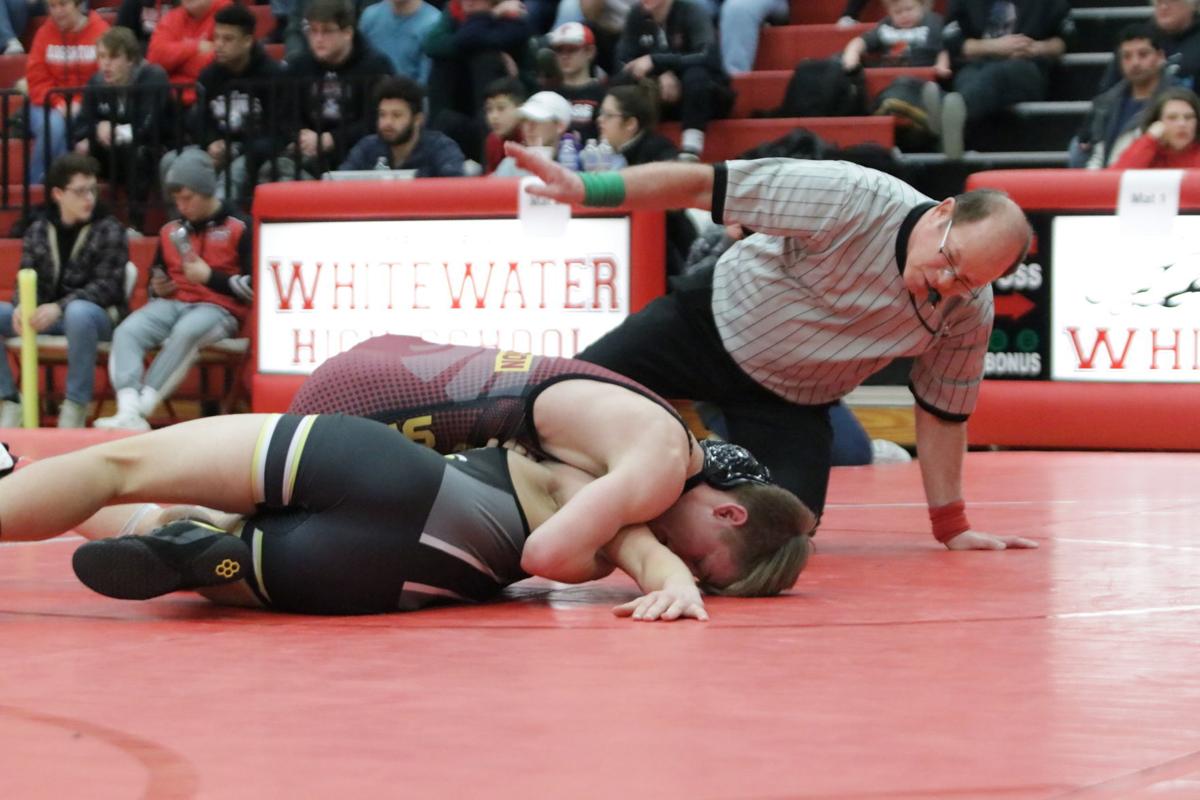 Ethan Dieckman finishes off a pin in his championship bout at 138 pounds for Jefferson on Saturday.

Jefferson junior Aaron Heine locks up the cradle before finishing off a 20-second pin in the 182-pound championship bout on Saturday. 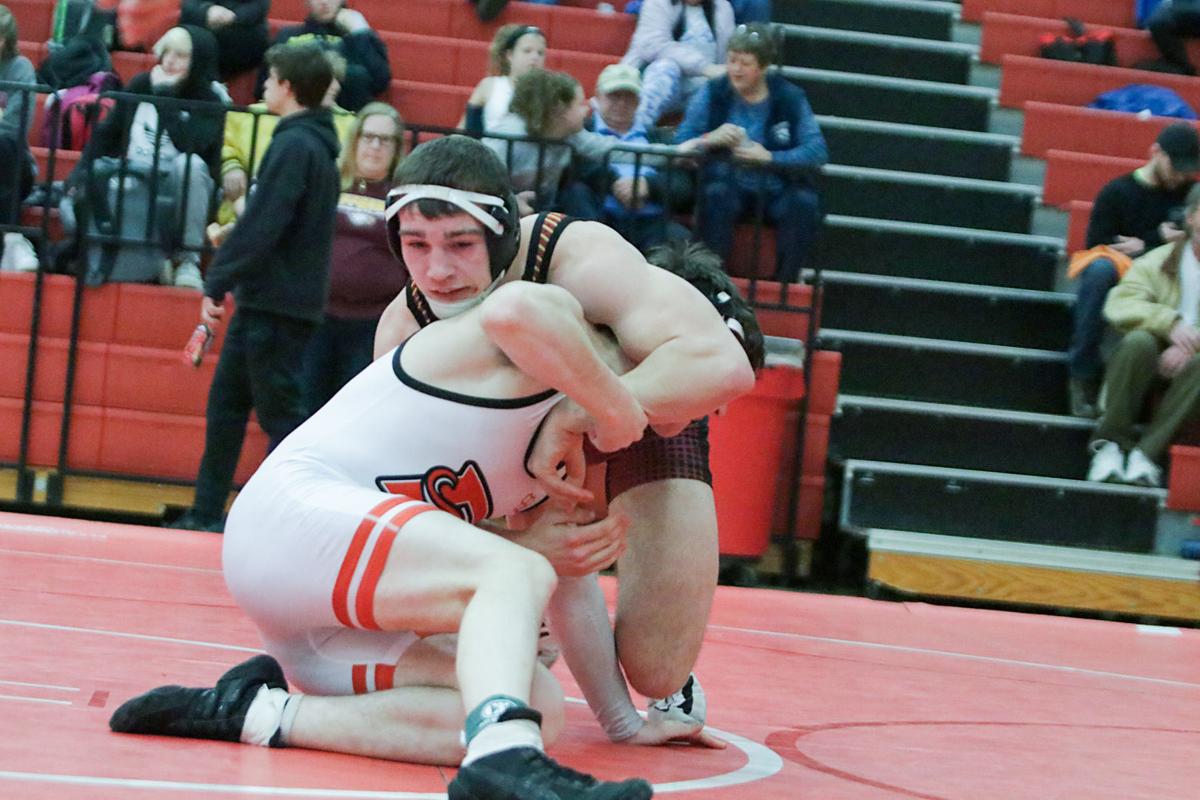 Jefferson senior Dean Neff was in control throughout the day as he earned a 160-pound RVC title on Saturday.

Ethan Dieckman finishes off a pin in his championship bout at 138 pounds for Jefferson on Saturday.

Jefferson junior Aaron Heine locks up the cradle before finishing off a 20-second pin in the 182-pound championship bout on Saturday.

Jefferson senior Dean Neff was in control throughout the day as he earned a 160-pound RVC title on Saturday.

WHITEWATER — Aaron Heine wasted no time; Dean Neff got called for stalling before transforming into a bulldozer; and Ethan Dieckman returned to form.

All three Jefferson wrestlers took first place in their respective weight classes at the Rock Valley Conference Championship at Whitewater High School on Saturday and the Eagles took sixth place out of eight schools with 141.5 points.

The Whitewater Whippets, which had 13 wrestlers in the tournament, took fifth place with 149 points and Evansville/Albany scored 228.5 points to win the league tournament.

Jefferson had five of its seven wrestlers compete for the RVC title. Heine, a junior 182-pounder, earned a pin in 20 seconds to win his title bout; Dieckman picked up a second-period pin to win the 138-pound weight class; and Neff earned a victory by technical fall in the second period of the 160-pound championship bout.

Three Eagles winning their respective weight classes is a feat only accomplished at a conference title in school history twice before — 1966 and 2009.

“Being a conference champion in this conference is definitely something to be proud of. Being a runner up is nothing too shabby either,” Jefferson co-head coach Devin Weber said. “In other sports like football or whatever, you get awarded second team by a vote, but in wrestling you have to earn everything you get.

“Them making the finals makes them at least second-team all-conference, so that’s something to be proud of too.”

Heine was wrestling against Evansville/Albany junior Collin Roberts, who was the top seed in the RVC and is seventh in the WiWrestling.com rankings for Division 2 182-pounders. Roberts earned a 16-4 major decision against Heine in the RVC Duals tournament after losing to Heine, 8-6, in a match earlier in the season.

This time, Heine (34-6) was prepared from the opening whistle.

“I was doing my homework,” Heine said. “I probably watch the videos with him from the past like three times in the past week. I practiced with (co-head coach EJ) Pilarski on each move and went out there and did everything I had in my head and it all worked out. ...

“I beat (Roberts) who wasn’t ranked in the past and is now ranked ahead of me. I just go out there and annihilated him and that makes me feel like I can do that even more. That was a boost for my self esteem.”

Added Weber, “It’s obviously great for his confidence because the more confident you are, the better you wrestle. As far as that match goes, in the future, that kid could come back and wrestle him well in the next time. Just because he pinned him in 20 seconds doesn’t necessarily mean anything the next time they wrestle. But as far as Aaron’s confidence, this was huge.”

For Neff, it took a while to assert his dominance in his championship match against Edgerton senior Hunter Seblom. Neff is the second-ranked wrestler in the weight class according to WiWrestling.com and was the top-seeded RVC wrestler. In the first period, he was called for stalling and his entire demeanor changed as he proceeded to throw Seblom wherever he wanted and won a 18-3 victory by technical fall.

“Today, two of the top competitors at 160 are down to 152 for the tournament series,” Weber said. “He came in knowing that he’s the alpha male in the room, so for Dean today, a lot of it was not doing anything stupid — not getting disqualified or getting hurt. He just needed to do the right things and make sure he came out of here with a gold medal and no unsportsmanlike conducts.

“Dean was going to take care of business regardless.”

Neff (38-1) won two matches with first period pins to get into the title match.

Dieckman, on the other hand, waited until the second period to get his three pins on the day. The sophomore, who had the top record (22-7) in his weight class, was locked in a back-and-forth, evenly-matched bout with East Troy sophomore Drake Kulick until Dieckman flipped him to his back.

That was the way most of the day went for Dieckman.

“Ethan did very well throughout the whole day,” said Heine, who is one of the team captains as a junior. “He had a few good matches and a couple of times he scared me, but his was more fun to watch. Dean just went out there and pounded everyone. Dean did great, but watching Ethan was a little bit more exciting.”

Five Whitewater Whippets took third place and one took second place as they earned a fifth-place finish at the RVC Tournament on Saturday.

Carter Friend (30-8) was the only Whitewater wrestler to make it into the championship bout. He lost a 4-3 decision to Beloit Turner senior Tre’veon Bivens in the 152-pound weight class title.

Friend won a 13-0 major decision in the semifinals against Brian McCullough of Brodhead/Juda and pinned East Troy wrestler Connor Paulin at 1:16 in his opening match.